Read The Story of the Greeks (Yesterday's Classics) Online

The Story of the Greeks (Yesterday's Classics) 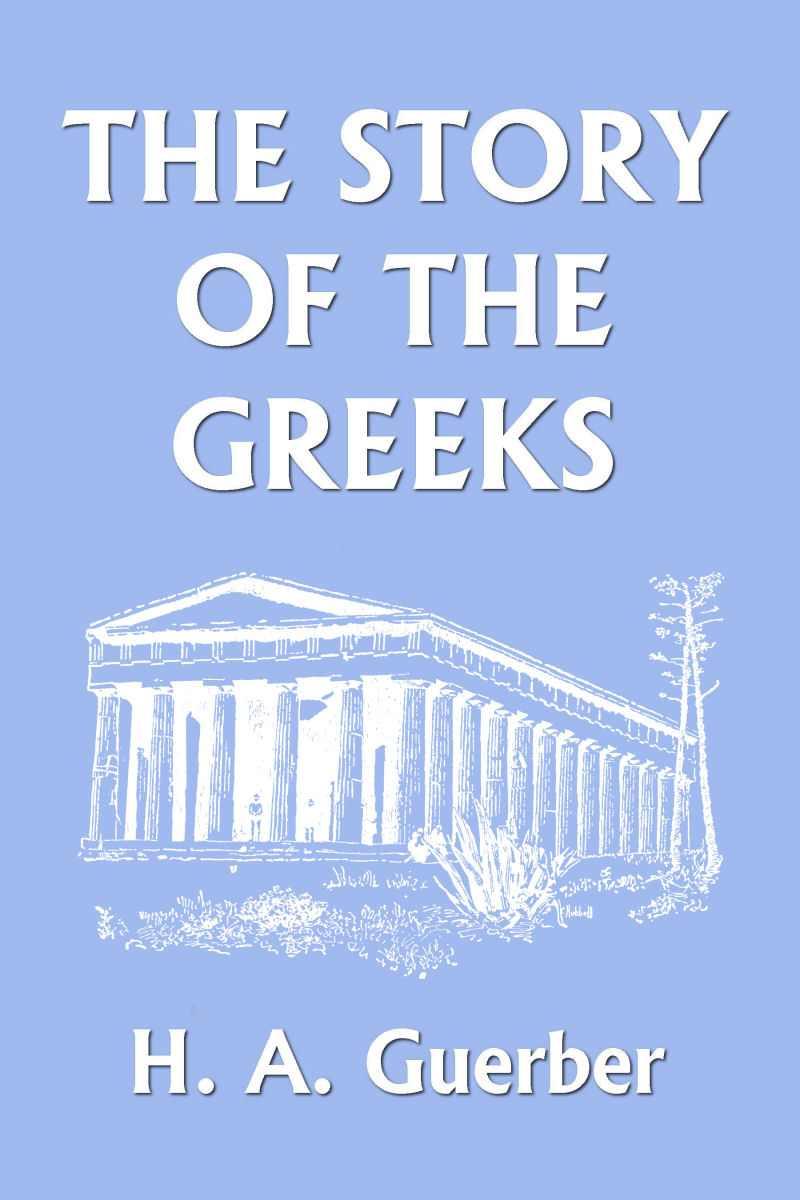 All rights reserved. No part of this book may be reproduced or retransmitted in any form or by any means without the written permission of the publisher.

Yesterday's Classics republishes classic books for children from the golden age of children's literature, the era from 1880 to 1920. Many of our titles are offered in high-quality paperback editions, with text cast in modern easy-to-read type for today's readers. The illustrations from the original volumes are included except in those few cases where the quality of the original images is too low to make their reproduction feasible. Unless specified otherwise, color illustrations in the original volumes are rendered in black and white in our print editions.

This elementary history of Greece is intended for supplementary reading or as a first history text-book for young pupils. It is therefore made up principally of stories about persons; for, while history proper is largely beyond the comprehension of children, they are able at an early age to understand and enjoy anecdotes of people, especially of those in the childhood of civilization. At the same time, these stories will give a clear idea of the most important events that have taken place in the ancient world, and, it is hoped, will arouse a desire to read further. They also aim to enforce the lessons of perseverance, courage, patriotism, and virtue that are taught by the noble lives described.

A knowledge of ancient history, however superficial, is of very great value; and the classic legends are almost equally worth knowing, because of the prominent part they play in the world's literature. These tales make a deep impression on the minds of children, and the history thus learned almost in play will cling to the memory far more tenaciously than any lessons subsequently conned.

Many children leave school unacquainted with any history except that of the United States; which, dealing with less simple and primitive times than that of Greece, is apt to be so unattractive that the child never afterwards reads any historical works. It has been my intention to write a book which will give children pleasure to read, and will thus counteract the impression that history is uninteresting.

A few suggestions to teachers may not be considered superfluous. In the first place, I have found historical anecdotes an excellent aid in teaching English. Pupils find it far from irksome to relate the stories in their own words, and to reproduce them in compositions. Secondly, whenever a city or country is mentioned, every pupil should point out its location on the map. By such means only can any one properly understand an historical narrative; and in the present case there is the added reason that the practice will go far towards increasing the child's interest in geography. Lastly, the teacher should take great care that the proper names are correctly pronounced. The most common errors are provided against in the text; for, on the first occurrence of such a word, it is divided into syllables, with the accent marked. It remains for the teacher to enforce the ordinary rules as to the proper sounds of vowels and consonants.

Chapter I.   Early Inhabitants of Greece

Chapter II.   The Deluge of Ogyges

Chapter III.   The Founding of Many Important Cities

Chapter V.   The Story of Dædalus and Icarus

Chapter VI.   The Adventures of Jason

Chapter XII.   The Taking of Thebes

Chapter XIII.   The Childhood of Paris

Chapter XIV.   The Muster of the Troops

Chapter XV.   The Sacrifice of Iphigenia

Chapter XVI.   The Wrath of Achilles

Chapter XVIII.   The Burning of Troy

Chapter XXI.   The Rise of Sparta

Chapter XXVII.   The Music of Tyrtæus

Chapter XXXIV.   The Laws of Solon

Chapter XXXVIII.   Death of the Conspirators

Chapter XLIII.   The Advance of the Second Host

Chapter XLIV.   The Battle of Marathon

Chapter LII.   The Burning of Athens

Chapter LIII.   The Battles of Salamis and Platæa

Chapter LIV.   The Rebuilding of Athens

Chapter LVIII.   The Age of Pericles

Chapter LIX.   The Teachings of Anaxagoras

Chapter LXVIII.   The Overthrow of the Thirty Tyrants

Chapter LXXI.   The Defeat of Cyrus

Chapter LXXII.   The Retreat of the Ten Thousand

Chapter LXXV.   The Peace of Antalcidas

Chapter LXXVIII.   The Battle of Leuctra

Chapter LXXX.   The Battle of Mantinea

Chapter LXXXI.   The Tyrant of Syracuse

Chapter LXXXIII.   The Sword of Damocles

Chapter CII.   The Return to Babylon

Chapter CIV.   The Division of the Realm

Chapter CVI.   The Last of the Athenians

Chapter CVII.   The Colossus of Rhodes

Chapter CVIII.   The Battle of Ipsus

Chapter CIX.   Demetrius and the Athenians

Chapter CXIII.   The War of the Two Leagues

Chapter CXIV.   The Last of the Greeks

A
LTHOUGH
Greece (or Hellas) is only half as large as the state of New York, it holds a very important place in the history of the world. It is situated in the southern part of Europe, cut off from the rest of the continent by a chain of high mountains which form a great wall on the north. It is surrounded on nearly all sides by the blue waters of the Mediterranean Sea, which stretch so far inland that it is said no part of the country is forty miles from the sea, or ten miles from the hills. Thus shut in by sea and mountains, it forms a little territory by itself, and it was the home of a noted people.

The history of Greece goes back to the time when people did not know how to write, and kept no record of what was happening around them. For a long while the stories told by parents to their children were the only information which could be had about the country and its former inhabitants; and these stories, slightly changed by every new teller, grew more and more extraordinary as time passed. At last they were so changed that no one could tell where the truth ended and fancy began.

The beginning of Greek history is therefore like a fairy tale; and while much of it cannot, of course, be true, it is the only information we have about the early Greeks. It is these strange fireside stories, which used to amuse Greek children so many years ago, that you are first going to hear.

About two thousand years before the birth of Christ, in the days when Isaac wanted to go down into Egypt, Greece was inhabited by a savage race of men called the Pelasgians. They lived in forests, or in caves hollowed out of the mountain side, and hunted wild beasts with great clubs and stone-tipped arrows and spears. They were so rude and wild that they ate nothing but raw meat, berries, and the roots which they dug up with sharp stones or even with their hands.

For clothing, the Pelasgians used the skins of the beasts they had killed; and to protect themselves against other savages, they gathered together in families or tribes, each having a chief who led in war and in the chase.

There were other far more civilized nations in those days. Among these were the Egyptians, who lived in Africa. They had long known the use of fire, had good tools, and were much further advanced than the Pelasgians. They had learned not only to build houses, but to erect the most wonderful monuments in the world—the Pyramids, of which you have no doubt heard.

Round the Clock by Girard, Dara
i bc27f85be50b71b1 by Unknown
Carter (Remington Ranch Book 3) by SJ McCoy
Battlesaurus by Brian Falkner
The Collected Adventures of Sherlock Holmes in Japan by Ben Stevens
Cockney Orphan by Carol Rivers
Finders Keepers by Gulbrandsen, Annalisa
Always and Forever, Lara Jean by Jenny Han
April 8: It's Always Something by Mackey Chandler
One Flew Over the Cuckoo’s Nest by Ken Kesey
Our partner