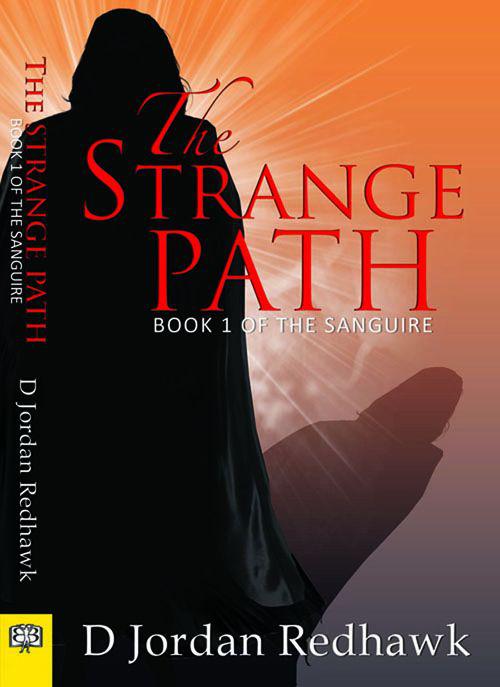 THE STRANGE PATH A BOOK OF THE SANGUIRE

Anna Redhawk—you could never love you like me—standing next to you will always be me.

No book is written in a vacuum, and this particular series has seen years of writing, editing, proofing and rewriting. So many people have helped me throughout its creation, and I know I’m missing people somewhere along the line. If your name isn’t here, my apologies. Know that you were vital to the finished product, and I couldn’t have done it without your support.

Those not among the missing include Janet Redhawk (no relation), Agatha Turko, Carol Dickerson, Teresa Crittenden, Jean Rosestar and Jaq Hills. You stuck with my first efforts through the years, added your two cents where appropriate, and kept me interested enough in the project to continue writing it. Thank you for the emails and critiques! And Mr. Dommie? You da man!

Anita Pawlowski, Shawn Cady and Anna Redhawk (definite relation!)—my first readers. You guys suffered through reading four different versions of the same story. My apologies for taking so long to get it right, and I appreciated your time and effort on my behalf. You guys ROCK!

Most of all, my thanks go to Karin Kallmaker, Katherine V. Forrest, and everyone else at Bella Books.  They took a single manuscript and agreed to a trilogy, sight unseen. Thank you so much for taking a chance on me!

To know more, check out her website, In Shadows -
http://www.djordanredhawk.net

Whiskey woke, unable to see, lurching to one side as all motion stopped. The sudden stillness puzzled her.
Why does my head hurt?
Car doors slammed, rocking her with the reverberations. Fear kicked her heart into overdrive.
The boys, the car, the attack.
Someone thumped the trunk lid. She flinched, barely kept from crying aloud as footsteps crunched past. They spoke just out of hearing, their voices nothing more than a murmur that she registered above the roar of her pulse in her ears. Blood still oozed from the cut in her mouth. She hadn’t been unconscious long. That meant they hadn’t traveled too far from where they’d attacked her.

Struggling, she turned onto her side, reaching out to the walls of her cramped prison. Rubber and dust filled her nostrils, the spare tire digging into her side. Other unseen items pressed against her, her backpack a hindrance as buckles and straps tangled her arms. If she got out of here in one piece, she’d at least have her personal belongings with her. She strained against the lid. It didn’t budge.
Maybe I can reach the latch from in here.
She searched blindly for the nooks and crannies inherent in any vehicle trunk. Stiff carpet met her touch, slight dips and hollows indicating where metal chassis gave way to engineering cavities. If she could get the carpeting pried up, she might be able to access—

The lid popped open. They dragged her from the trunk. Swearing, she punched and scratched and kicked anything within reach.

Pleased, Whiskey had no time to dwell on the distinctly different taste of the boy’s blood compared to her own. One lost his grip on her arms, and she threw a wild roundhouse swing that connected with another’s temple.

“Hold her! Fucking hold her, you idiots!”

That was their ringleader, Paul. She remembered that much at least from their initial meeting.

Despite the strength of desperation, she succumbed, outnumbered. She stood pinioned between two nervous boys, Paul gloating before her. In the dim glow of a distant streetlight, she made out a prone body a few feet away. Satisfaction shot through her.
Knocked that bastard out, at least.
Two others nursed their wounds nearby. One wrapped his bleeding hand in a T-shirt. Beyond fear, she sneered at him, making a production of licking her lips.

Paul backhanded her, knocking her head to one side. She slowly turned toward him, defiance simmering. Lights sparkled in her vision. She shook her head, but they remained in the darkness beyond Paul’s shoulder.
They look like eyes.

“Hope you clean up good, bitch, because we’re going to fuck you until you scream. But first—” He punched her hard in the abdomen.

Whiskey tried to double over from the impact, but her captors held her upright. Paul hit her again in the same place. She sagged and dry-heaved, unable to breathe. The boys let her drop to her knees between them. Nothing but bile came up. She couldn’t help a weak chuckle.
Good thing I haven’t eaten all day.
Movement flickered from the corner of her vision. She looked into the night, and saw the sparkles nearing.
Dogs?
The lights weren’t at ground level.
Awful big dogs.

Paul yanked her head up by the hair. Grinning, he said, “You’re going to regret fucking with me, bitch.” He delivered another punch, his fist crashing into her cheek, knocking her back to the ground.

Whiskey struggled to retain enough consciousness, to stand and defy the bastard. Everything ached. Her ears rang, and her stomach threatened to make another vomiting attempt.

“Come on, get up, pussy. Thought you were going to kill me.”

Anger flared in her chest. She forced herself to her hands and knees. Maybe she’d die tonight, but she’d be damned if she’d go down without a fight. Impatient, Paul ordered his friends to pick her up. The reality of her physical state hit her. Panting, she tried to unfold her body, unable to straighten from the pain in her belly. She sagged between her captors, the edges of panic tickling her resolve.

Whiskey blinked as a woman coalesced from the darkness where the sparkles had been. Others materialized with her, sliding into the clearing from every direction.
Were those their eyes?

“Hold her,” Paul muttered. He turned to the newcomer. “It’s none of your business. Beat it. There’s nothing here for you.”

The new arrivals ignored him. They threaded their way through the group, seven Goth street punks—four men and three women. Even in her half-beaten state, Whiskey felt a measure of envy for their leather and latex. They had a small fortune invested in their wardrobe. All four men had mohawks, though only two had dyed and spiked them. Of the women, one had the telltale dyed black hair of a Goth. The others had red and blonde hair respectively.

The redhead had come out of hiding first. She now slinked among the boys to stand before Paul. “I’m hurt.” A fake pout perched upon her lips. “You’re having a party, and you didn’t bother to invite us.”

A couple of the boys sniggered, obviously feeling they had the upper hand. The male punks were slim and silent. None swaggered with machismo despite tattoos, multiple piercings and clothing that bristled with metal spikes. The lead of a woman enhanced their inherent weakness, magnifying it by the placid way they’d infiltrated the scene. Rather than put up a united front, they’d sprinkled themselves among the rich teenagers, mingling with the enemy, weakening their advantage.

“What kind of party did you have in mind?” Paul leered at the redhead.

The woman with dirty blonde hair sidled up to Whiskey and her captors. Without asking permission, she reached over and fingered Whiskey’s hair. One of the boys tightened his grip, but didn’t interfere. The blonde brushed disheveled hair from Whiskey’s face, caressed her cheek with a thumb, swiping through the blood trickling from her nose. The woman’s dark eyes slowly scanned Whiskey’s form before returning to her face. She smiled, tasted the blood on her thumb, and turned away.

Whiskey shivered as the woman’s eyes flashed golden from the reflection of a distant streetlamp.
Just like a wolf.
She shook her head; she couldn’t deny the points of light she’d seen in the darkness before their arrival.
They must wear designer contacts.

The teasing conversation had continued between Paul and the redhead, all attention upon them. Beside Whiskey, the blonde murmured in a barely audible voice, “
Aga ninna.
”

Whiskey wondered what it meant. She blinked at the abrupt attention from the punks. As one, they turned to stare at her. She saw several sets of eyes flash like the blonde’s. What the fuck’s going on? She’d barely heard her. How the hell did they? Who are they?

Suspicious with the sudden tension, the boys shuffled in the crowd, their movements childish and awkward compared to the dangerous grace of their visitors. First to turn away, the redhead reached up to caress Paul’s cheek. “This party’s just getting started.” With a laugh, she raked her fingernails down his face, gouging the skin with razor-sharp swiftness.

He yelped in pain, reaching out to backhand her.

The blonde spun around, and delivered a punch to one of Whiskey’s guards. The boy released Whiskey, and crumpled to the ground.

“One punch?” Whiskey stared at the boy writhing on the ground. She saw no blood, and the blonde didn’t have a weapon.
Christ, she’s strong!

“Fuck this!” Whiskey’s other guard turned, and ran into the darkness.

Without the support, Whiskey dropped to her knees, her body reminding her of the toll that had been taken. Staring stupidly around the clearing, she saw her tormenters lying on the ground, some unconscious and others moaning in pain. She smelled the sharp aroma of blood, though it didn’t look like any of them were seriously wounded. Peering at the aftermath, she attempted to wrap her mind around the speed and power of the punks’ attack.

“Let me assist you,
ninna
.” The blonde helped Whiskey stand, and offered her body as a brace.

Whiskey grunted, her stomach roiling at the abuse. She couldn’t stand straight, and wondered if she’d received internal injuries. She glanced around, amazed at the efficacy of her saviors. Her gaze narrowed on one of them crouching over his victim. He looked ready to bite the boy’s neck.

“Manuel, not now,” the redhead ordered.

Whiskey closed her eyes, shaking her head. A sharp stab of pain made her stop.

“Later, dude,” the man with the blue mohawk said. “Let’s get out of here before the cops show up.”

“We’re too exposed, Manuel,” the redhead said. “I don’t want the
Saggina
coming down on us. Not now.” Her gaze flickered to Whiskey. “You know why.”

1 The Assassins' Village by Faith Mortimer
Passion's Exile by Glynnis Campbell
Dark Destiny: Book One of the Destiny Novella Series (Destiny Novellas 1) by Kari Gray
How They Were Found by Bell, Matt
The Amateur Science of Love by Craig Sherborne
Much Ado About Madams by Rogers, Jacquie
Reasons I Fell for the Funny Fat Friend by Ann, Becca
Framingham Legends & Lore by James L. Parr
Suffocating Sea by Pauline Rowson
Monster by Jonathan Kellerman
Our partner