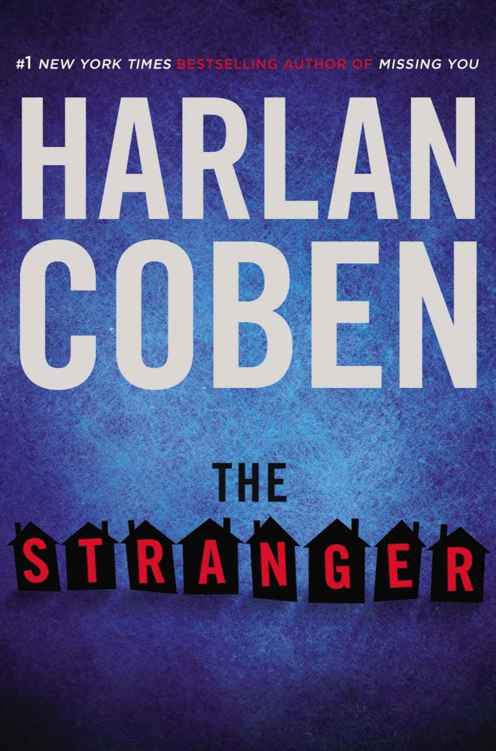 has been applied for.

In loving memory of my cousin
Stephen Reiter

And in celebration of his children,
David, Samantha, and Jason

Oh my soul, be prepared for the coming of the Stranger.

Be prepared for him who knows how to ask questions.

There is one who remembers the way to your door:

Life you may evade, but Death you shall not.

T
he stranger didn’t shatter
Adam’s world all at once.

That was what Adam Price would tell himself later, but that was a lie. Adam somehow knew right away, right from the very first sentence, that the life he had known as a content suburban married father of two was forever gone. It was a simple sentence on the face of it, but there was something in the tone, something knowing and even caring, that let Adam know that nothing would ever be the same.

“You didn’t have to stay with her,” the stranger said.

They were in the American Legion Hall in Cedarfield, New Jersey. Cedarfield was a town loaded up with wealthy hedge fund managers and bankers and other financial masters-of-the-universe
types. They liked to drink beer in the American Legion Hall because it was comfortable slumming, a way to pretend that they were salt-of-the-earth good ol’ boys, like something in a Dodge Ram commercial, when they were anything but.

Adam stood by the sticky bar. There was a dartboard behind him. Neon signs advertised Miller Lite, but Adam had a bottle of Budweiser in his right hand. He turned to the man, who had just sidled up to him, and even though Adam already knew the answer, he asked the man, “Are you talking to me?”

The guy was younger than most of the fathers, thinner, almost gaunt, with big, piercing blue eyes. His arms were white and reedy with a hint of a tattoo showing beneath one of the short sleeves. He was wearing a baseball cap. He wasn’t quite a hipster, but there was something of a wonk attitude coming off him, like some guy who ran a tech department and never saw the sun.

The piercing blue eyes held Adam’s with an earnestness that made him want to turn away. “She told you she was pregnant, right?”

Adam felt his grip on the bottle tighten.

“That’s why you stayed. Corinne told you she was pregnant.”

It was right then that Adam felt some kind of switch go off in his chest, as if someone had tripped the red digital timer on some movie bomb and now it had started to tick down. Tick, tick, tick, tick.

The American Legion Hall was loaded up with town dads
sporting those white baseball T-shirts with the three-quarter sleeves and either baggy cargo shorts or perfectly no-assed Dad jeans. Lots of them wore baseball caps. Tonight was the fourth-, fifth-, and sixth-grade boys’ lacrosse draft and A-team selections. If you ever wanted to witness type As behaving as such in their natural habitat, Adam thought, watch when parents get involved in their own offsprings’ team selections. The Discovery Channel should film this.

“You felt obligated to stay, am I right?” the man asked.

“She lied, Adam.” The younger man spoke with such conviction, not just as though he knew for certain but that, at the end of the day, he had Adam’s best interest at heart. “Corinne made it all up. She was never pregnant.”

The words kept landing like punches, dazing Adam, sapping his resistance, leaving him shaken and confused and ready to take a standing eight count. He wanted to fight back, grab the guy by the shirt, toss him across the room for insulting his wife like this. But he didn’t for two reasons.

“I’m the stranger,” he said. “The stranger with important knowledge. She lied to you, Adam. Corinne. She was never pregnant. It was all a ruse to get you back.”

Adam shook his head. He swam through, tried to stay rational and calm. “I saw the pregnancy test.”

“I saw the sonogram.”

“Again fake.” He held up a hand before Adam could say more. “And yes, so was the stomach. Or should I say stomachs. Once Corinne started to show, you never saw her naked, right? What did she do, claim some kind of late-night sickness so you wouldn’t have sex? That’s what happens most times. So when the miscarriage occurs, you can kinda look back on the whole thing and realize the pregnancy was difficult right from the start.”

A booming voice from the other side of the hall called out, “Okay, guys, grab a fresh beer and let’s get this show on the road.”

The voice belonged to Tripp Evans, the president of the lacrosse league, a former Madison Avenue ad exec and a pretty good guy. The other dads started to grab aluminum chairs, the kind you use for your kid’s school concert, from a rack and placed them in a circle around the room. Tripp Evans looked over at Adam, spotted the undoubtedly pale expression on his face, and frowned his concern. Adam shook him off and turned back to the stranger.

“Think of me as your savior. Or like the friend who just released you from prison.”

All conversation had pretty much ended. The voices were hushed now, the sounds of scraping chairs echoing in the still hall. The fathers were getting their game faces on for the draft. Adam hated this. He wasn’t even supposed to be here—Corinne was. She was the treasurer of the lacrosse board, but her school had changed
the scheduling of her teachers’ conference in Atlantic City, and even though this was the biggest day of the year for Cedarfield lacrosse—indeed the main reason Corinne had become so active—Adam had been forced to step in for her.

“You should be thanking me,” the man said.

For the first time, the man smiled. It was, Adam couldn’t help but notice, a kind smile, the smile of a healer, of a man who just wants to do the right thing.

From across the room, Tripp Evans called, “Adam?”

He turned toward them. Everyone was seated now except Adam and the stranger.

“I have to go now,” the stranger whispered. “But if you really need proof, check your Visa card. Look for a charge to Novelty Funsy.”

“One more thing.” The man leaned in close. “If I were you, I’d probably run DNA tests on your two boys.”

“I have no evidence on that, but when a woman is willing to lie about something like this, well, it’s a pretty good bet it isn’t her first time.”

And then, with Adam dazed anew by this final accusation, the stranger hurried out the door.