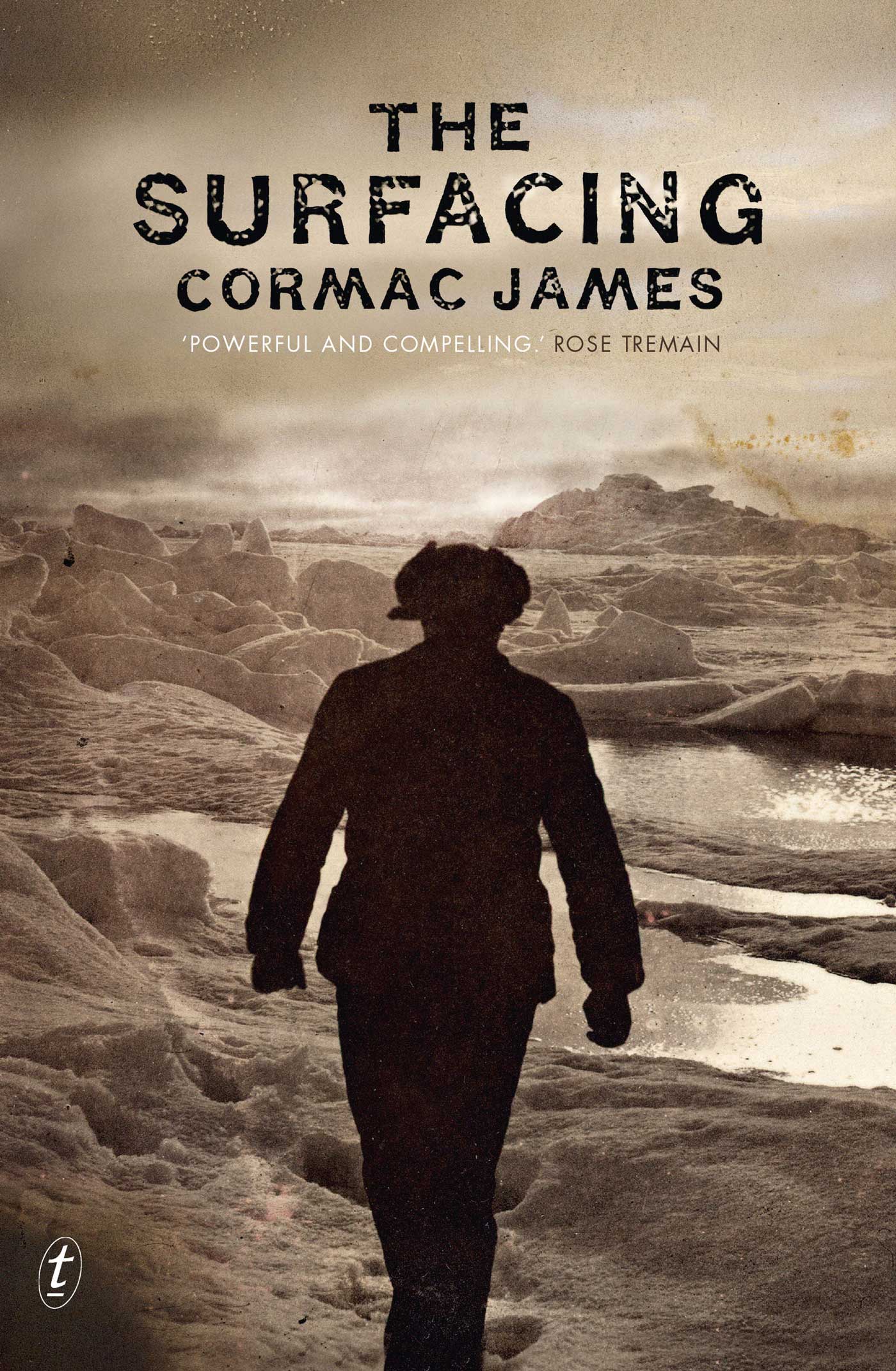 â
The Surfacing
is an extraordinary novel, combining a powerful narrative with a considered
and poetic use of language in a way that is not often seen these days. Reading the
book, I recalled the dramatic natural landscape of Jack London and the wild untamed
seas of William Golding. Cormac James' writing is ambitious enough to be compared
with either.'

âThe great topic of Cormac James'
The Surfacing
is the reach of human possibility.
The prose is calm, vivid, hypnotic and acutely piercing. James is attuned to the
psychological moment: this is a book about fatherhood and all its attendant terrors.
It's a remarkable achievementâ¦James recognises the surfacing of love in the face
of solitude. A stylish novel, full of music and quiet control. This is a writer that
I'd like to see hurryâ I'm looking forward already to the next book.'

Cormac James was born in Cork, Ireland, and now lives in France. His first novel,
Track and Field
, was published in 2000.
cormacjames.com 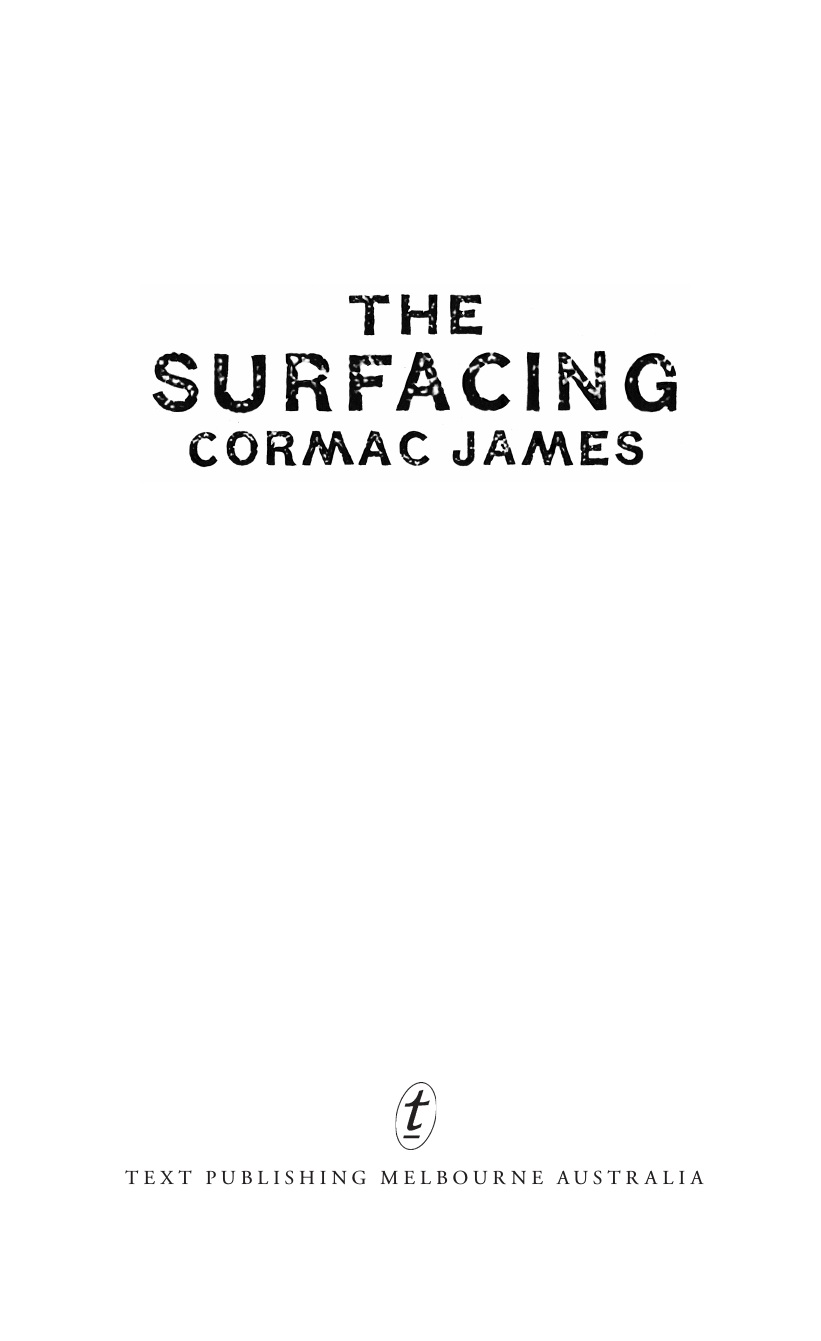 The author wishes to thank the Arts Council/an Chomairle EalaÃ­on for its generous
funding during work on this book.

The moral right of Cormac James to be identified as the author of this work has been
asserted.

All rights reserved. Without limiting the rights under copyright above, no part of
this publication shall be reproduced, stored in or introduced into a retrieval system,
or transmitted in any form or by any means (electronic, mechanical, photocopying,
recording or otherwise), without the prior permission of both the copyright owner
and the publisher of this book.

for Cian and Laetitia

They passed through belts the colour of mud, and belts the colour of mustard, that
ran directly across the stream. They slid into banks of fog that stood dead on the
water, that blanked everything but their voices, and slid back into the daylight
as out of a steam room. Exiting one such bank, on the 25th, they met a queer-looking
brig. They'd had the sea to themselves since Aberdeen, and hailed heartily, but she
made no acknowledgement, slid silently by, into the fog aft, and they never saw her
again.

Captain Myer insisted on a strict schedule, to tame the day. By seven o'clock. By
eight. By half past. Bunks. Breakfast. Tubs. He wanted all mouths fed at the same
time, whether they were hungry or not. At the fixed hour, he wanted them all abed,
even if they were not ripe for it. He spoke of the ship as one family, one body,
unified. Every noon without fail he could be seen reconciling his several chronometers.

On the 27th, finally, a coastline was cried out. The men all came up and stared at
it as a wonder. Greenland, it was called. It looked like burned bog. There was not
a single tree, or a single bush. There was no grass. Frayed and shabby at the edges,
there was still snow on those hills that faced north.

At Disko there was no other ship. Well above the high water line stood a lone warped
wooden house, with a line of huts behind, set directly into the hillside. The huts
were roofed with sods level with the land, and from the ship, through the glass,
the dirty bundles seemed to crawl out of a hole in the ground.

The whaleboat moved towards the shore with Myer standing at the bow. It was a pose
he had admired privately. Already, crowds of women and children were waiting on the
rocks. It was an open-air abattoir. Bones, waste, and offal everywhere. And everywhere
strips of meat three and four and five feet long laid like frost-charred ferns on
the bare ground, to cure. The air was
almost sweet. To no one in particular, Myer
announced: What a welcome. A carnival of the unclean.

Under the boat, giant grey tentacles, that looked more animal than vegetable, tried
a lazy flourish. Lieutenant Morgan, the ship's second, stared down at them from the
stern. The previous summer, he had swum in the liquid jade of Aegean. That seemed
another world to him now, another man.

The governor's house was suspiciously clean, and suspiciously neat, as though something
untoward had happened there, of which they hoped to eliminate every trace. It was
a blatant rebuttal to everything seen on the shore. The floors were green, and looked
freshly painted. The low ceilings were pale blue. The lady of the house was the governor's
sister, Miss Rink. She was pale as an invalid, yet glowed with health. Her skin too
seemed strangely clean.

They sat and stared at a grumbling stove and let Rink talk. He was struggling to
pull the cork from a bottle. Near the fire stood an empty brass birdcage. The cork
came away with a sound, knowing sigh.

You and your officers are all my guests, Rink said. As long as you are here.

We couldn't think of soiling your sheets for just one night, Myer said.

What does that matter? Rink said. Let her wash some sheets. She complains she is
being bored most of the time.

We're really not so badly off where we are, Morgan said. Quite tightly packed, it's
true, but comfortable nonetheless.

She asked outright how many they were, and Myer told her. They were six officers,
ten men, one boy and one Greenlander, to manage the dogs and to translate, if need
be. We couldn't possibly ask you to entertain us all, Myer said.

It's not often I have the pleasure of proper conversation, she said.

You see, Rink told them.

You must regularly have visits from the whalers, Morgan told her.

The whalers are a very particular, I almost said peculiar, class of man. I admire
them greatly, but there are limits, I find, to their charms.

Her hair was blonde, pulled back very tight. There would be a great relief, it looked
to Morgan, if all of a sudden the thing were undone.

Myer said they really could not linger, however much the hospitality of Mr Rink and
his charming sister might appeal. Already they were behind schedule, he said. They
had a rendezvous with other Admiralty ships at Beechey Island, in Lancaster Sound,
from where they would disperse to various points in the archipelago, to begin the
search, before the winter set in again.

I do not think so, Rink said.

The winter is slow going this year, she said.

We're hoping to get a good run through The Pack, said Myer.

You will be doing it well, Rink said, if even you get there at all.

That month alone, she said, three whalers had been crushed in Melville Bay. Out of
Peterhead. Two more, crippled, had only just gone home.

Myer said he had not seen them, coming up the coast.

Did Myer really think there was still hope of finding them? Rink asked. Franklin
and the two missing ships, he meant. Didn't he think it had been rather long, how
many years was it now, with neither sight nor sound of them?

We must try, Myer said. We must make our very best effort, and we must not relinquish
hope.

The drawing rooms of London will not tolerate anything less, DeHaven said.

Myer scowled. Pay no attention to Dr DeHaven's irreverence, he said. At every opportunity
he runs down the entire enterprise, but I can assure you there is no more resolute
man aboard. His younger brother is on the
Terror
.

Myer said he had a letter for Rink from the Directors of the
Royal Greenland Trading
Company. He nodded at Morgan, who tendered the envelope.

What does it say? Rink asked.

Naturally I haven't opened it, Myer said. And even if I had, I believe it is written
in Danish.

His sister took it and broke the seal. She mumbled through the formalities, scanned
for the essentials. Where possible, she read, we are to â she checked her translation
â generously to supply the bearer's material needs.

Rink did not answer. He was staring out the window, seemed not to have heard. He
had drunk half the bottle himself. The skeleton of a ship lay on the shore. A ship
found drifting off the coast, abandoned, the previous summer. A strange story, Rink
said.

The officers let the man talk. Every now and then Myer made a civil noise in his
throat. Morgan caught the sister looking at him. She raised her eyebrows a fraction,
her shoulders, and gave a silent sigh. Every year a package came down from Upernavik
with the last of the whalers â however many sentimental novels the priest there had
managed to beg from the captains that season. These and her brother's stories were
all she had to shorten the winter nights.

Standing at the window beside him, Myer said he dared not imagine what it was like,
inside the natives' huts. Rink led the way to the nearest one, and Myer followed
eagerly. From the porch, they watched him pull aside the flap. They watched Myer
lean forward, then jerk his head backward, as though he'd been struck. They live
in a ditch, he shouted back to the house, and called his officers to come and see.

The officers all obeyed, but just as Morgan made to follow Miss Rink placed a hand
on his arm. She shook her head. She made an ugly face. He did not go. They stood
in silence, alone on the porch. Morgan watched her touch the tip of her cigar to
the post and put what was left back into the case. Just as gently, she touched her
fingertips to the drop of green glass hanging at her neck. This was as though it
might not still be
there â an elegant pretence. They stood and listened to the ice
groan and stutter down at the shore. There was rain on the way. The low sky was a
slab of stone.

Are you quite sure you cannot stay for dinner? she asked.

They talked carefully. She said she had not so much as set foot on a boat or a sledge
for five years.

Morgan made no comment. Rink and the other officers came back and stood up on the
porch out of the rain. Myer was hounding him for supplies.

There were no supplies, Rink said. The most he could offer them was a few hares,
a young goat. They could have all the codfish they liked, of course.

What about furs? Myer said. There was nothing he would not trade. Books, rum, beer
â whatever Rink and his sister wanted most.

It made no difference. There were no furs. The reindeer, Rink said, sprawled his
arms in a helpless gesture. The great days were gone. They should have stopped farther
south.

But Myer refused even to think of going back. He was afraid of being late, of missing
his chance, of not getting through. In the end, the officers all went back into the
house and waited with the sister, and drank her coffee, while Rink did the rounds
of the huts, confiscating what he could.

Margaret Moore by Scoundrels Kiss
Amerika by Lally, Paul
Kiss Me Crazy by Walters, Ednah, Walters, E. B.
The Whitby Witches 1 - The Whitby Witches by Robin Jarvis
When I Was Young and In My Prime by Alayna Munce
F in Exams The Very Best Totally Wrong by Richard Benson
Life Light by R.J. Ross
The Goodtime Girl by Tess Fragoulis
Pushed Too Far: A Thriller by Ann Voss Peterson, Blake Crouch
Tiempos de Arroz y Sal by Kim Stanley Robinson
Our partner