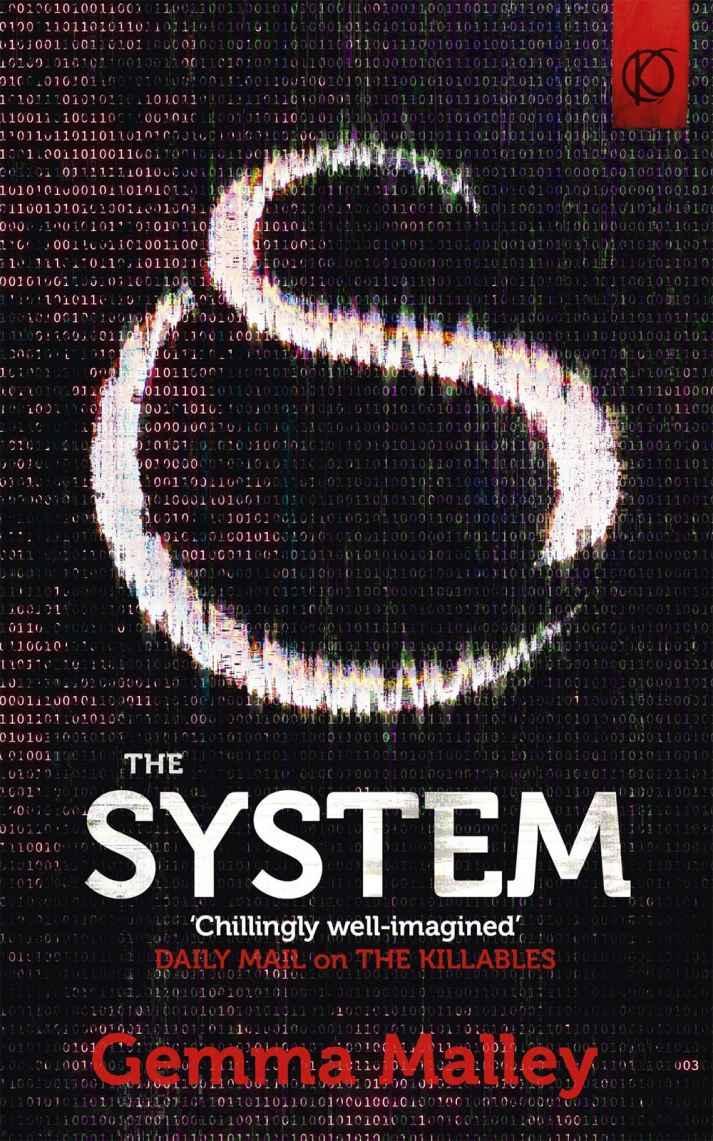 for the latest news, competitions and

The right of Gemma Malley to be identified as the Author of the Work has been asserted by her in accordance with the Copyright, Designs and Patents Act 1988.

To my darling Allegra

Raffy watched silently as he, Evie, Linus and Benjamin were ushered into a large room by Thomas, their captor. Every so often he sneaked a little look at Evie, and each time it felt like a punch to the stomach because he knew that she would resent his gaze, knew that the only thing she felt for him was hatred and disappointment. She looked dazed, tired, desperate; she was staring ahead resolutely but he could see from her bloodshot eyes that she was having to work hard to hold herself together. And in a weird way it made him proud of her; she’d never let Thomas see her crack. She was too strong, too stubborn, too determined. It was what he had always loved about her, always been drawn to, those fierce eyes of hers, the way she was always so fearless even when she had so much to lose.

And now she had lost it all because of him. Now everyone had lost. No one would meet his eyes, acknowledge his existence. No one except Benjamin, that is, who had put his arm around him gently as they walked into the room, whose sad eyes gazed at him in pure forgiveness, which Raffy found even harder to take. He knew he had let down the one man he would have done anything for. That Benjamin might forgive him just made him loathe himself even more.

‘I’m sure you’ll find this comfortable,’ Thomas was saying, showing them around. Raffy could tell that everyone was doing their best to look unimpressed, unfazed, but the truth was that the place was incredible. It was huge, a sprawling apartment with floor-to-ceiling windows along one wall that were frosted so that they couldn’t see out. Thick rugs covered the floor, and enormous sofas sat comfortably around the place. In one corner was a kitchen with gleaming black surfaces, on which sat a huge bowl of fruit and an even larger bowl full of cakes of some sort. There were two doors with glass panels, both closed; several solid doors were open and led into bedrooms, cavernous rooms with giant beds, private bathrooms and soft fluffy dressing gowns.

And then there were the screens. Large screens covered every wall, in every room, even the bathrooms. Screens that were divided up into ten, twenty moving images; other screens that showed just one. They showed people, walking down the street, laughing, talking, typing messages into mid-air that then miraculously appeared at the bottom of the screen. Most of them showed the same girl striding down the street, a purposeful look on her face.

Raffy tried not to look at them, tried to look nowhere, at nothing, but he couldn’t help himself, couldn’t stop himself from staring at the girl who beamed out from so many of the screens. A beautiful girl in a pale pink dress, she seemed to glow as she threw her head back and laughed.

‘That’s Frankie,’ Thomas said with a little smile. ‘I expect you’ll get to know her quite well.’

‘Who … who is she?’ Raffy asked, needing to speak, needing to have his voice heard as though it might cut through the atmosphere, make things more normal.

‘Frankie? She’s the third most Watched person on the planet,’ Thomas said lightly. ‘A great ambassador for Infotec, although she doesn’t know it. Everyone right around the world either wants Frankie or wants to be Frankie.’

Raffy stared at the screen. ‘Infotec,’ he said, his voice low, unemotional. ‘This place belongs to your company?’

Thomas looked at him for a moment, then started to laugh. ‘Raffy, you don’t get it, do you? Infotec owns everything. Everything and everyone. Now, let me show you where you’re going to be working. That is the point of this little holiday, after all.’

He walked towards the two glass doors and opened the first. In the room was a desk and a computer, which immediately said hello, making Raffy start slightly; on the wall was another screen.

‘Linus, you’ll be in here,’ Thomas said. ‘You have the latest technology at your disposal. Raffy, you’re in here.’ He walked out of the room and into an identical one next door. ‘Linus, you will build the System; Raffy, you will check his code. My people will then check it again. If any discrepancies are found, any errors, any little worms or viruses, Benjamin and Evie will be punished. Do you understand?’

Linus looked around the room thoughtfully. ‘Where are we, Thomas? Paris? Somewhere close to Paris?’ Raffy glanced at him, suddenly realising why Linus had spent the journey here, by helicopter, with his face pressed against the window. Raffy had assumed travel sickness or anger, or both. It had taken them about two hours; in that short time they had travelled from a cave in the desolate scrubland outside the City to a civilisation that they had been led to believe had been destroyed many years before. Then again, they’d been led to believe a lot of things, and most of them had been lies.

Thomas nodded, smiling. ‘Pretty good,’ he said. ‘So, let me introduce you to Milo. Milo, get in here please.’

Raffy didn’t know who he was speaking to, but a few moments later the door opened and a man appeared, much younger than Thomas, his dark hair swept to the side, his face lightly tanned, his shoes shining. He was wearing a suit with a polo-neck jumper underneath; his teeth gleamed white.

‘So, which one of you is Linus?’ he asked, his face breaking into a grin that didn’t reach his eyes.

Raffy stared at him sullenly. ‘Which one do you think?’ he muttered.

‘I’m Linus,’ Linus said then, stepping forwards, his voice soft, his expression unreadable. ‘You’re Milo? Nice to meet you, Milo. And how do you fit into this nice little set-up?’

Milo didn’t answer; he looked at Thomas, who was staring at Linus, a strange look in his eye. ‘This is him,’ he said. ‘This is the man who built the System. This is the man I created this world for.’

‘No,’ Linus corrected him immediately. The tone of his voice was still light, but there was no mistaking the seriousness in it. ‘I can’t take any credit for what you’ve achieved here. You didn’t build any of it for me, Thomas. I didn’t ask you to do any of this.’

‘You’re right.’ Thomas shrugged dismissively, then his eyes lit up again. ‘I did it all myself. And it’s brilliant. Truly brilliant.’

‘You’ve certainly been busy,’ Linus said, nodding to himself as he gazed around. ‘Tell me about the screens, Thomas. Who are these people?’

‘And the others?’ Linus asked. ‘They work for you?’

‘Work for me? No, Linus. None of them work for me. Not even Frankie. No, they are just going about their lives, but everyone watches them. Well, not everyone. Only people like Frankie get watched by everyone. Only the most popular. Most people are just watched by us, by their friends and families, by ex-lovers, by prospective ones. But everyone is watched. All the time. It’s part of the deal. And the best part is they love it. Everyone wants to build their numbers. The more Watchers they have, the more income they receive, but more importantly, the cheaper everything becomes. Restaurants give them money off because they’re advertising their establishment. Clothes are virtually free. They get to the top 1000 most Watched in their country and they can get pretty much anything they want for free.’

‘You’re watching all these people? All the time?’ Evie asked suddenly, her mouth hanging open as she stared at the screen next to Raffy’s office, which had thirty or so images on it, ten of them Frankie. Raffy watched too; watched a man walk into a bathroom and urinate, watched a man undress a woman, kissing her breast.

‘Me personally? Oh no. No, I don’t have to Watch them. I can if I want to. If I sniff a problem. But mostly we just sit back. Because everyone else is doing it for us,’ Thomas said, a little glint in his eye. ‘Incredible, isn’t it?’ he asked, turning back to Linus. ‘Fear got me through the door. I mean if it hadn’t been for the Horrors, I’d never have convinced the governments of the world to install cameras on every corner, in every room of every building. But what I never expected is how much people like being looked at. The narcissist in all of us is quite a potent tool, you know.’

‘It certainly is quite something,’ Linus said, frowning as he looked at the screens. ‘But this woman, she’s at home?’ He motioned at the image on the top left hand of the screen, a middle-aged woman drinking a cup of tea, carefully dunking a biscuit into it.

Thomas nodded enthusiastically. ‘CCTV captures people outside the home, but ninety-four per cent of people now have cameras in their homes too and they’re better quality generally.’

‘People actually have cameras in their homes now?’ Linus asked.

Thomas looked very pleased with himself. ‘What can I say? People like them; won’t stop installing them,’ he said with a little shrug that belied the glint in his eye. ‘They want higher Watcher numbers, and they like the security. And of course it makes updating much easier. Every fifteen minutes – that’s the rule. Unless you’re in sight of a camera, you have to manually update your status. So that everyone knows what you’re doing, so everyone knows you’re safe. Having cameras in your home makes everything much easier.’ He laughed.

‘Motion sensors on the bed capture DNA from the skin,’ Thomas said proudly. ‘People can switch them on and switch off the cameras if they want to … if they want some private time. Although people don’t care so much about private time these days. Private time means that Watchers lose interest. Got to keep those numbers up. Got to be entertaining. Sometimes people share just a little too much for my liking, but what are you going to do when they’re all chasing Watcher numbers? Far be it from me to get in the way.’ He winked, and laughed again, like he’d just told the funniest joke. But no one else laughed.