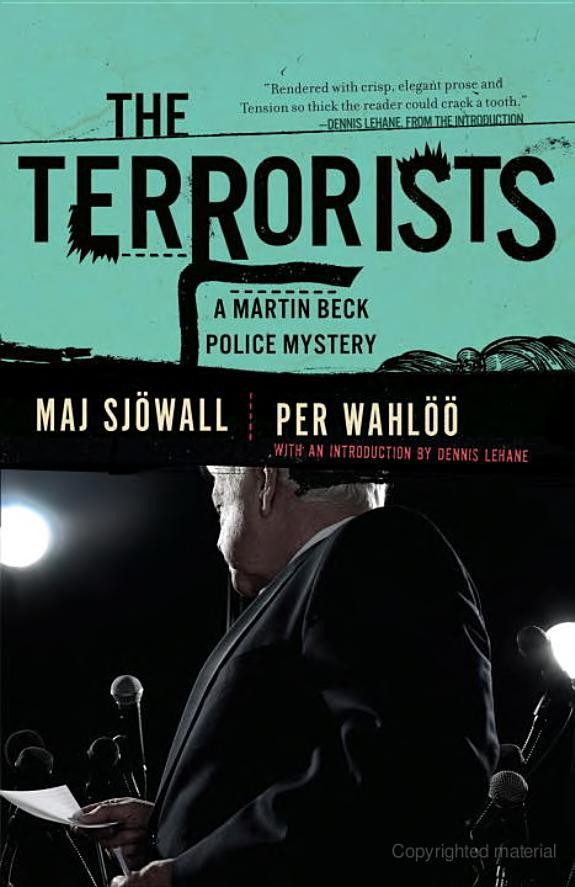 Praise for
MAJ SJÖWALL
and
PER WAHLÖÖ

“The Sjöwall-Wahlöö style and stories are dramas that expose fascinating truths about modern life.”

“The most superb new police mystery writer of recent years has been the tandem Maj Sjöwall and Per Wahlöö.”

“Sjöwall and Wahlöö are still the best writers of police procedure in the world.”

“The whole series has an immediacy to it that is both honest and awesome. These are the kind of books you can’t help but read in one sitting.”

“The [Martin Beck] series has maintained such a degree of excellence that comparisons are near impossible.”

MAJ SJÖWALL
and
PER WAHLÖÖ

Maj Sjöwall and her husband, Per Wahlöö, wrote ten Martin Beck mysteries. Mr. Wahlöö, who died in 1975, was a reporter for several Swedish newspapers and magazines and wrote numerous radio and television plays, film scripts, short stories, and novels. Maj Sjöwall is a poet. The books, together known as “The Story of Crime,” remain one of the greatest series of crime stories ever written.

THE MARTIN BECK MYSTERY SERIES
by
MAJ SJÖWALL
and
PER WAHLÖÖ

Vintage is a registered trademark and Vintage Crime/Black Lizard and colophon are trademarks of Random House, Inc.

As one might expect from a novel entitled
The Terrorists
, terrorism abounds in Maj Sjöwall and Per Wahlöö’s final Martin Beck police procedural. But the chaotic forms that terror takes are not simply that of the political assassinations that bookend the narrative (the first in Latin America, the second in Stockholm). Sjöwall and Wahlöö are after a much more expansive query of the very definition of terrorism. And so Martin Beck and his Murder Squad of disparate, contentious police officers don’t just engage an impending act of violent insurrection on the streets of Stockholm. They must also solve the murder of a wealthy pornographer and contend with the destruction of an eighteen-year-old naïf, Rebecka Lind, by the teeth of the social welfare system. All the while, their greatest enemy is not bullets or bombs, it’s the bureaucratic apparatus that exalts and rewards its own haplessness.

As this novel—the tenth in the series—is Martin Beck’s swan song, it’s worth noting that in the annals of realistic fictional policemen, Beck stands a full head above most. He carries plenty of psychic scars and admits to a depressive personality, but he’s not gloom laden to the point of masochistic self-pity that so often masquerades as a hard-boiled hero’s tragic worldview. Beck is a dogged worker bee entering his later middle-aged years with a healthy romantic life and no illusions about his place in the larger scheme of things. However exceptional, he is a civil servant. A great
cop, yes, but in Sjöwall and Wahlöö’s vision, a great cop is little more than a great functionary in a hopelessly flawed system. Beck’s talents include “his good memory, his obstinacy, which was occasionally mule-like … his capacity for logical thought … [and finding] the time for everything that had anything to do with a case, even if this meant following up small details that later turned out to be of no significance.” This is what makes a great cop—not the gun, not outsized emotion, not a need to tilt at windmills and otherwise rage against machines. That’s the writer’s job. The cop’s job is to persevere, to examine the evidence, collate the data, push the papers, and work the case to its end. Because what stands in the way of that approach—wholesale bureaucratic incompetence—is a constant in Sjöwall and Wahlöö’s Sweden of 1975. Any man who can push a vision of the truth, however colorless, however minuscule, through the thornbush of total systematic inefficiency, is a hero. And Martin Beck is that man. So much so that the icy, hypercompetent terrorist, Reinhard Heydt, finds it “incomprehensible that such a person would exist in a country like Sweden.”

Ah, yes, “a country like Sweden.” One wonders how Sjöwall and Wahlöö managed to live there through the writing of the ten Martin Beck novels, so negative is their depiction of not just the failed welfare state but the physical landscape as well, a shameless myth of blond goddesses and mineral springs that in reality gives birth every morning to a “dismal, dirty, gray and depressing dawn.” It’s a late November world, compressed by a dark, swollen sky that hovers roughly four inches above your head until May. The courts don’t work, the schools produce little but rot, and the ruling class skims the cream off the top and turns its back as the poor fight over the coffee grounds.

Nowhere are the inequities of the system more heartbreakingly personified than in Rebecka Lind. Rebecka understands society so little that she walks into a bank and asks a teller for money because she’s heard banks give loans to those in need. She is not only turned down, she is arrested, and so begins her journey into the farcical justice system that Martin Beck works for. Rebecka, who “is not interested in politics other than that she finds society as such incomprehensible and its leaders either criminal or insane,” is the novel’s holy fool and sacrificial lamb, cast adrift by a society
that proclaims to care for her then preys upon her as soon as her isolation leads to financial need. Over the course of the novel, Rebecka will cross paths with Martin Beck and his girlfriend, Rhea, as well as with Walter Petrus, the soon-to-be-bludgeoned pornographer. The corpulent, impotent Petrus casts pubescent girls in skin flicks so low-budget sex, from film to film, takes place “on the same old couch, which occasionally changed covers.” Petrus first hooks his ingénues on narcotics. Once they need the drugs and are willing to do anything to get their next fix, he reveals to them that “anything” will involve having sex on film. While Rebecka Lind escapes his grasp (only to end up in the system’s callous grip), several children do not. The reader doesn’t need a map to spy the connections Sjöwall and Wahlöö draw between the type of terrorism in which Petrus traffics and that of both the ULAG assassins and the state.

The target of Reinhard Heydt and his band of multi-ethnic assassins is an unnamed, reactionary U.S. Senator who “had advised President Truman to drop the first atom bombs … and taken an active part in the ‘solutions’ in Thailand, Korea, Laos, Cambodia, and Vietnam.” A man who helped push the button that bombed Hiroshima might have some moral wiggle room, but not if he did the same to Nagasaki or advocated the bombing of civilian irrigation systems in Cambodia, actions which, if they aren’t representative of state-sponsored terrorism, then nothing is.

The assassins hardly come off as a romantic band of freedom-fighting anarchists. They are cold, vicious, and no more dedicated to any real cause or any universal truth than the U.S. Senator. Like him, the only truth they seem to represent is that might equals right. They believe in the primacy of homicide in bending the will of the people to the point where the people realize their will is irrelevant. Their terrorism—like Petrus’s, like the Senator’s, like the Swedish PM’s—is all the more scary because it is so colorless, so passionless, so instinctually banal. The ferocity of destructive acts in the novel is terrifying precisely because those who wield it feel no ferocity. They feel nothing. Those who do feel—Rebecka Lind, the father of one of Petrus’s victims, Beck’s ex-partner, Kollberg—get run over or choose to step off the highway for good.

So what is the solution? By ending the book—and the series—on the word
Marx
, Sjöwall and Wahlöö seem to be making their
case for communism. But it feels no more a well-conceived solution than, say, Sarah Palin thirty-four years later, crowing about the free market as a solution to all capitalism’s ills. Luckily Sjöwall and Wahlöö the novelists are savvier than Sjöwall and Wahlöö the polemicists. They write of modern violence with clarity so fluid it achieves a kind of musical grace. The opening assassination in Latin America is a model of perfectly chosen detail and near-comic narrative distance. Much later, the Senator’s motorcade winding through Stockholm is rendered with crisp, elegant prose and tension so thick the reader could crack a tooth. The stunning murder of a local politician evokes Oswald, Ruby, and Sirhan Sirhan in a single sentence without ever mentioning any of them. And Reinhard Heydt’s stalking of Martin Beck is as perversely playful and traumatic as anything Hitchcock or Highsmith ever devised.

Midway through the novel, Rhea says to Beck, “You’re terrific, Martin. But you’ve got a hell of a job. What sort of people are they you get for murder and other horrors? Like the last one—some poor working slob who tried to hit back at the capitalist bastard who had destroyed his life.” It’s a damning indictment, one that Kollberg repeats at the novel’s end when he tells Beck he’s got “the wrong job. At the wrong time. In the wrong part of the world. In the wrong system.”

That system has soiled all who touch it. The innocents are destroyed. So are many of their exploiters. In the soul-carnage that erupts in the wake of the novel’s events, few people—good or bad—are left unscathed. Only the system itself, in all its grime and stupidity, grinds on, inviolate, with the smart, dogged, melancholic Martin Beck bearing its standard.

Born on a Blue Day: Inside the Extraordinary Mind of an Autistic Savant by Daniel Tammet
Man of the Trees by Hilary Preston
Dirty Aristocrat: British Billionaire Bad Boy Romance by Unknown
The Princess of Denmark by Edward Marston
To Live Again by L. A. Witt
Satan by Jianne Carlo
The Angel and the Outlaw by Madeline Baker
Royal Desire (Maid for the Billionaire Prince Vol 4) by Artemis Hunt
DC Affairs by Selene Chardou
a Touch of Ice by L. j. Charles
Our partner