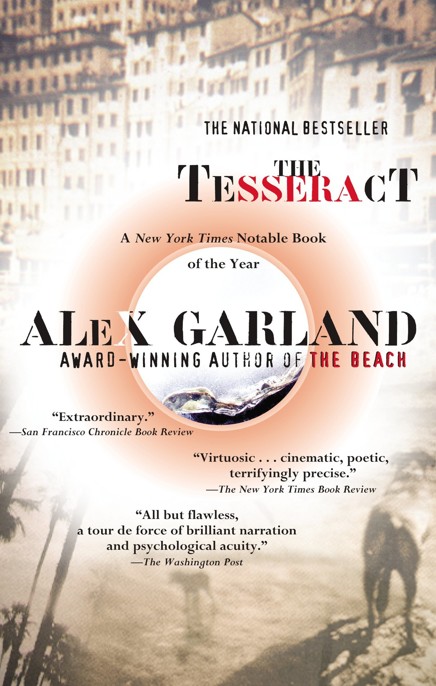 Praise for
The Tesseract

“Remarkable…Garland is a master at capturing that elastic moment before tragedy rips through the surface of ordinary life. Even in moments of explosion, he catches every contradictory thought of terror and compassion.”

“As thoroughly assured a performance as
The Beach
…Mr. Garland not only does a completely convincing job of sketching in these characters’ lives in a series of quick, deftly drawn strokes, but he also fluently cuts back and forth between their stories, building suspense the way a film editor does, even as he is tying his disparate heroes’ tales together with dozens of overlapping motifs. All those small details…come together to give the reader a mosaiclike view of Manila. Mr. Garland is a natural at orchestrating violent set pieces with deadpan panache, but he also proves in this novel that he can create odd, oddly sympathetic people with unexpected inner lives. [
The Tesseract
] reconfirms his prodigious and diverse talents.”

“Inventive and compelling…[Garland’s] brain beats with the energy of ideas and the courage to bridge the big questions.”

“Complex and intriguing…This subtle fiction has nothing to do with the higher maths and a lot to do with good old-fashioned storytelling about big, old-fashioned themes—the mysteries of love and violence and death, the strange workings of fate. Mr. Garland tells a good, straightforward story, and he writes with great polish and superior control; so much control, in fact, that, like his characters, you don’t really realize what’s going on until it’s too late.
The Tesseract
marks a significant departure from, and growth since,
The Beach.
Like a tesseract, it is composed of three dimensions that, in the end, inevitably imply a larger and more significant fourth…each story is delicately observed and ingeniously linked to the others…”

“The tales converge in a climax that will leave you…impressed with the author’s skill…a steam engine of a narrative.”

“A novel that bristles with suspense…Garland’s skill at creating tension keeps the novel driving forward with the force of a thriller…mature, intelligent, and rewarding.”

“Garland…possesses an exquisite ability to handle the English language. [He] remains a writer to watch.”

“A page-turner…[Garland] spins a terrific yarn; he has an admirable gift for capturing relationships with the whisk of a pen….
The Tesseract
is a dashing tour de force of novelistic skill.”

“A swift psychological thriller…its fallout is the bleak heart of the novel, analogous to weepy snapshots interleaved with Garland’s sharp, beautifully rendered stills of the final shoot-out…. A novel high on skill.”

“A thriller of elegant and complex austerity…
The Tesseract
delivers tremendous speed and style, a style that’s utterly pared away yet still allusive and oblique…. Mr. Garland’s dash of experimentalism, his sleek craftsmanship, the confident way he handles the details of Filipino life and his apparent ease, like [Graham] Greene’s, in moving between pop-genre demands and deeper literary concerns: All of these mark him as a highly promising young novelist.”

“One of the most structurally complex noir novels ever written.”

“From the first page to the last, Garland’s fine writing [makes]
The Tesseract
a delightful novel. Sean, Rosa, Cente, and a half-dozen other figures emerge with startling authenticity and life. His young girls and old men, boys and grandmothers are beautifully rendered. The Philippines open up before us, through Garland’s imaginative labors, in a linguistic and historic abundance. Like Graham Greene, Alex Garland takes familiar stories—the murder thriller, the tragic romance, the orphan’s wanderings—and spins them into explosive political fiction. Perhaps the novel’s fourth dimension is Garland’s own insight into the Philippines, an island country about which he writes angrily, intimately, and lovingly.”

“Is Alex Garland the new Graham Greene? After
The Tesseract
, the question needs to be asked.”

“The reader will come away impressed by his sense of place and his unique storytelling, which combines a brisk, complex plot with an ability to get into the souls and skins of people.”

“Intriguing and intricate…Fast-paced, suspenseful, and thought-provoking, this is top-drawer fiction and highly recommended.”

“Provocatively complex…Garland lures us into a world where logic is turned on its ear and coincidence is simply how life is. In Garland’s world, as with Graham Greene’s, good and evil are rarely that…. A century ago another English writer, Thomas Hardy, created novels where coincidence played a significant role in his characters’ lives to show that man can never escape a preordained fate. Garland goes him one better, suggesting that destiny is preordained not by some universal force but rather by linked events and individual perception of existence. Only when a life is fully unfolded can we see the flaws in our perception; beforehand, the fourth dimension of existence remains a mystery.”

“Garland has a gift for moving the action along.”

“Like [Graham] Greene, [Garland] creates atmosphere, and specifically an atmosphere of foreign political intrigue and violence that grabs you and keeps you.”

“Garland has given us an existential thriller, a suspense story but with a cosmic twist. In a fictional genre in which so many fail, this is a rare and valuable achievement.”

“Most young authors get trapped in their own neurotic microworlds, but Garland goes global, scouring the Pacific Rim to produce dark, stark tales of menace and suspense…his fast, clean prose echoes Yanks like Hemingway.”

“Intricate, absorbing, and suspenseful…
The Tesseract
confirms [Garland’s] status as a gifted writer and an uncanny observer. It’s a spare work, filled with haunting images and telling vignettes that illuminate the characters’ lives like flashes of lightning…. His picture of Manila and its society is believable and authoritative, without any extraneous details or false notes…. [
The Tesseract
] engages the reader on multiple levels and sticks in the mind long after it’s been put down.”

“An extraordinarily powerful and immensely literary book [which] borders perilously close to the edge of brilliant…. Here we have a profoundly intelligent and beautifully complex tale of human emotion: of the error of coincidence; of the fickleness of fate; of the lottery of survival…. Mesmerizing and mysterious.”

“A brave, ambitious novel which proves that Garland is an important writer capable of great sensitivity and intelligence.”

“His exotic locations and metaphysical preoccupations have led Garland to be compared with Graham Greene. His cold eye and menaced sense of the sheer strangeness of the world bring him just as close to J. G. Ballard….
The Tesseract
is as spooky and compelling as it is thoughtful.”

—
The Mail on Sunday

“Laden with tension…moments of surprising sweetness.”

“To nick one of his phrases in this astonishing book, Alex Garland’s writing is as beautiful and rare as his own fingerprint…. Hornby, Ishiguro and Ballard all admire his work. You should too.”

“A vivid and highly entertaining book that promises even greater fireworks for its young author.”

“The work of a mature, sophisticated professional.”

“Alex Garland, at age twenty-six, seems like a natural-born storyteller. He’s written a furiously intelligent first novel about backpacker culture in Southeast Asia, a book that moves with the kind of speed and grace many older writers can only daydream about. Just as impressively, Garland has written what may be the first novel about the search for genuine experience among members of the so-called X Generation—twentysomethings weaned on video games, MTV, and decades’ worth of pop detritus—that’s not snide or reflexively cynical….
The Beach
combines an unlikely group of influences—
Heart of Darkness
, Vietnam war movies,
Lord of the Flies
, the Super Mario Brothers video game—into…ambitious, propulsive fiction.”

“[
The Beach
is] that real rarity: a subtle and complex novel that reads like a comet.”

“
The Beach
is impressive in its group portrait of a new generation of young vagabonds. Raised in an era of diminished confidence, they have set out in search of something that feels genuine and fulfilling. What they find turns out to be not utopia but hell.”

“You have in your hands one great book….
The Beach
will astonish readers…. Builds to a crackling finale, complete with interesting moral questions. But this is no mere thriller. Garland explores the roots of his generation’s ennui in the way he shows that our global popular media has saturated their brains. Not since reading Donna Tartt’s
The Secret History
has this reader been so taken with a first novel.”

“Garland shows a precociously sure hand in this taut, exotic thriller.”

“Generation X has its first great novel…. A wonderful adventure and allegory that may be the best novel written by anyone currently younger than thirty.”

“
The Beach
is fresh, fast-paced, compulsive, and clever—a
Lord of the Flies
for Generation X. It has all the makings of a cult classic.”

—N
ICK
H
ORNBY
, author of
High Fidelity
and
About a Boy

“A prediction: Alex Garland’s
The Beach
will be remembered down the years not as a neo-hippy cult hit but as our first glimpse of a huge literary talent.”