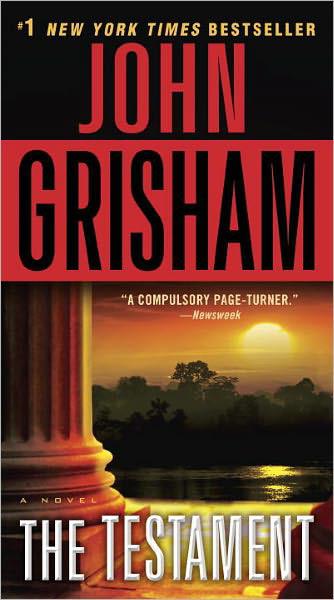 THE TESTAMENT
A Delta Book

This is a work of fiction. Names, characters, places, and incidents either are the product of the author’s imagination or are used fictitiously. Any resemblance to actual persons, living or dead, events or locales is entirely coincidental.

D
own to the last day, even the last hour now. I’m an old man, lonely and unloved, sick and hurting and tired of living. I am ready for the hereafter; it has to be better than this.

I own the tall glass building in which I sit, and 97 percent of the company housed in it, below me, and the land around it half a mile in three directions, and the two thousand people who work here and the other twenty thousand who do not, and I own the pipeline under the land that brings gas to the building from my fields in Texas, and I own the utility lines that deliver electricity, and I lease the satellite unseen miles above by which I once barked commands to my empire flung far around the world. My assets exceed eleven billion dollars. I own silver in Nevada and copper in Montana and coffee in Kenya and coal in Angola and rubber in Malaysia and natural gas in Texas and crude oil in Indonesia and steel in China. My company owns companies that produce electricity and make computers and build dams and print paperbacks and broadcast signals to my
satellite. I have subsidiaries with divisions in more countries than anyone can find.

I once owned all the appropriate toys—the yachts and jets and blondes, the homes in Europe, farms in Argentina, an island in the Pacific, thoroughbreds, even a hockey team. But I’ve grown too old for toys.

The money is the root of my misery.

I had three families—three ex-wives who bore seven children, six of whom are still alive and doing all they can to torment me. To the best of my knowledge, I fathered all seven, and buried one. I should say his mother buried him. I was out of the country.

I am estranged from all the wives and all the children. They’re gathering here today because I’m dying and it’s time to divide the money.

I HAVE planned this day for a long time. My building has fourteen floors, all long and wide and squared around a shaded courtyard in the rear where I once held lunches in the sunshine. I live and work on the top floor—twelve thousand square feet of opulence that would seem obscene to many but doesn’t bother me in the least. By sweat and brains and luck I built every dime of my fortune. Spending it is my prerogative. Giving it away should be my choice too, but I’m being hounded.

Why should I care who gets the money? I’ve done everything imaginable with it. As I sit here in my wheelchair, alone and waiting, I cannot think of a single thing I want to buy, or see, or a single place I want to go, or another adventure I want to pursue.

I’ve done it all, and I’m very tired.

I don’t care who gets the money. But I do care very much who does not get it.

Every square foot of this building was designed by me, and so I know exactly where to place everyone for this little ceremony.
They’re all here, waiting and waiting, though they don’t mind. They’d stand naked in a blizzard for what I’m about to do.

The first family is Lillian and her brood—four of my offspring born to a woman who rarely let me touch her. We married young—I was twenty-four and she was eighteen—and so Lillian is old too. I haven’t seen her in years, and I won’t see her today. I’m sure she’s still playing the role of the grieving, abandoned yet dutiful first wife who got traded in for a trophy. She has never remarried, and I’m sure she hasn’t had sex in fifty years. I don’t know how we reproduced.

Her oldest is now forty-seven, Troy Junior, a worthless idiot who is cursed with my name. As a boy he adopted the nickname of TJ, and still prefers it to Troy. Of the six children gathered here now, TJ is the dumbest, though it’s close. He was tossed from college when he was nineteen for selling drugs.

I cannot bear to recount the miserable histories of Lillian’s children. Suffice to say they’re all heavily in debt and virtually unemployable, with little hope of changing, so my signing of this will is the most critical event in their lives.

Back to the ex-wives. From the frigidity of Lillian, I ran to the steamy passion of Janie, a beautiful young thing hired as a secretary in Accounting but promoted rapidly when I decided I needed her on business trips. I divorced Lillian and married Janie, who was twenty-two years younger than I was and determined to keep me satisfied. She had two children as fast as she could. She used them as anchors to keep me close. Rocky, the younger, was killed in a sports car with two of his buddies, in a wreck that cost me six million to settle out of court.

I married Tira when I was sixty-four. She was twenty-three and pregnant by me with a little monster she named Ramble, for
some reason that was never clear to me. Ramble is now fourteen, and already has one arrest for shoplifting and one arrest for possession of marijuana. His oily hair sticks to his neck and falls way down his back, and he adorns himself with rings in his ears, eyebrows, and nose. I’m told he goes to school when he feels like it.

And he, along with the rest of them, expects me to sign my name on this will and make his life better. As large as my fortune is, the money won’t last long among these fools.

A dying old man should not hate, but I cannot help it. They are a miserable bunch, all of them. Their mothers hate me, so the children in turn have been taught to hate me too.

They are vultures circling with clawed feet, sharp teeth, and hungry eyes, giddy with the anticipation of unlimited cash.

THE SOUNDNESS of my mind is of great issue now. They think I have a tumor because I say weird things. I babble on incoherently in meetings and on the phone, and my aides behind my back whisper and nod and think to themselves, Yes, it’s true. It’s the tumor.

I made a will two years ago and left everything to the last live-in, who at the time paraded around my apartment in leopard print panties and nothing else and, yes, I guess I’m crazy about twenty-year-old blondes with all the curves. But she later got the boot. The shredder got the will. I simply got tired.

Three years ago I made a will, just for the hell of it, and left everything to charities, over a hundred of them. I was cursing TJ one day, and he was cursing me, and I told him about this new will. He and his mother and his siblings hired a bunch of crooked lawyers and ran to court in an attempt to have me committed to an institution for treatment and evaluation. This was actually
smart on the part of their lawyers because if I’d been judged mentally incompetent my will would have been void.

But I have many lawyers, and I pay them a thousand dollars an hour to manipulate the legal system in my favor. I was not committed, though at the time I was probably a bit off my rocker.

And I have my own shredder, one I’ve used for all the old wills. They’re all gone, eaten by a little machine.

I wear long white robes made of Thai silk, and I shave my head like a monk, and I eat little, so that my body is small and shriveled. They think I’m a Buddhist but in reality I study Zoroaster. They don’t know the difference. I can almost understand why they think my mental capacity has diminished.

Lillian and the first family are in the executive conference room on the thirteenth floor, just below me. It’s a large room, marble and mahogany, with rich rugs and a long oval table down the center, and it’s now filled with very nervous people. Not surprisingly, there are more lawyers than family members. Lillian has a lawyer, and so does each of her four children, except for TJ, who has brought along three to show his importance and make certain all scenarios are properly counseled. TJ has more legal problems than most death row inmates. At one end of the table is a large digital screen which will broadcast the proceedings.

TJ’s brother is Rex, age forty-four, my second son, currently married to a stripper. Amber is her name, a poor creature without a brain but with a large fake chest, who, I think, is his third wife. Second or third, but who am I to condemn? She’s here, along with the rest of the current spouses and/or live-ins, fidgeting nervously as eleven billion is about to be divided.

Lillian’s first daughter, my oldest, is Libbigail, a child I loved desperately until she left for college and forgot about me. Then she married an African and I erased her name from my wills.

Mary Ross was the last child born to Lillian. She’s married to a doctor who aspires to be super-rich, but they are heavily in debt.

Janie and the second family wait in a room on the tenth floor.
Janie has had two husbands since our divorce many years ago. I’m almost certain she is living alone at the moment. I hire investigators to keep me posted, but not even the FBI could keep track of her bed-hopping. As I mentioned, Rocky, her son, was killed. Her daughter Geena is here with her second husband, a moron with an MBA who is just dangerous enough to take a half a billion or so and masterfully lose it in three years.

I know these people. I watch them.

SNEAD APPEARS from the rear of my apartment. He’s been my gofer for almost thirty years now, a round homely little man in a white waistcoat, meek and humble, perpetually bent at the waist as if bowing to the king. Snead stops before me, hands clasped at the belly, as always, head cocked to one side, drippy smile, and says, “How are you, sir?” in an affected lilt he acquired years back when we were staying in Ireland.

I say nothing, because I’m neither required nor expected to respond to Snead.