Read The Theory of Games Online

The Theory of Games 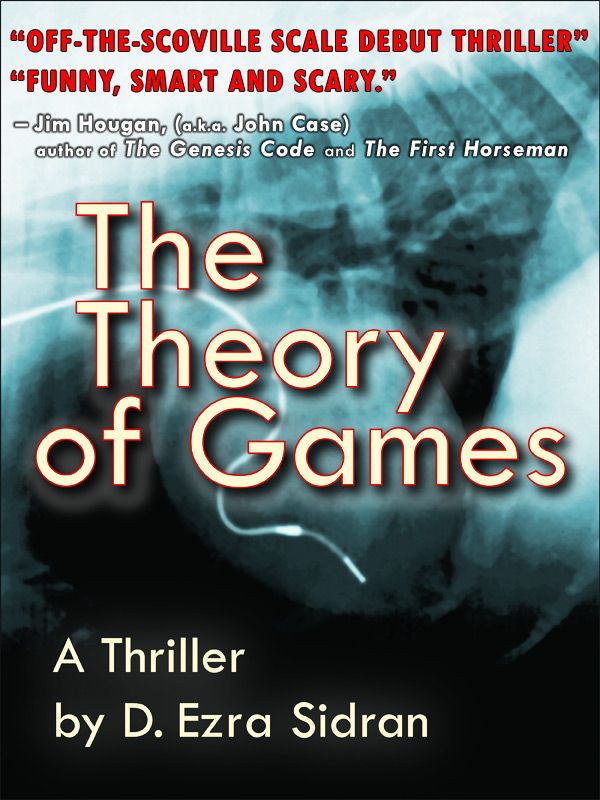 THE THEORY OF GAMES

All characters appearing in this work are fictitious.

Any resemblance to real persons living or dead is purely coincidental.

On the Internet go to:

to download free music composed for this book and read about the inspiration for this story.

Jim and Carolyn encouraged me to write this book and continued to give me encouragement and suggestions even in the darkest hours. They are not to be held responsible for its shortcomings.

Marta, for reasons that I cannot fathom, volunteered her services as editor for this book. She, too, should be held blameless.

This book is for Sam.

They say bad things happen fast but good things take forever, like saving up a hundred dollars one penny at a time.

I don’t know about that. Looking back it seems more like a cartoon avalanche that started with a pebble that hit a stone that hit a rock that hit a boulder that just buried me and everybody and everything I knew and loved.

Knowing what I know now I can see that it wasn’t a series of unconnected random events; even if that’s what they had meant for it to look like. Everything had been meticulously planned months – or maybe years – in advance.

The only thing they hadn’t counted on was Bill.

The word would not stay in focus. The letterforms blurred and overlapped but I could tell it was a long word, a technical word. I sounded each syllable out, “Ben-zo-di-az-e-pine.”

“Yes it is,” the man agreed as he plunged the tip of the syringe through the rubber stopper and into the vial, pulled back on the plunger, watched intently as the chamber filled with the drug and a string of bubbles burbled up towards the top. He kindly tapped the syringe twice with the nail of his index finger to ensure that the no air would be injected into my veins along with the opiate. It is these little things that endear the subject to the inquisitor.

“I wanna smoke,” I mumbled through fat bruised lips.

“You don’t smoke,” the authoritarian voice answered quite clearly as he began to swab my arm
.

“I can’t give you a cigarette. You know that.”

The restraints held me fast, but it didn’t matter. I was so sedated that the electrical impulses that my brain sent towards my hands, stopped off at the circumflex nerve for a drink, or two, or three never making it down to my fingers. I sent another urgent signal to my hands. Not much happened.

“You’re not getting up,” the authoritarian voice said, “just get that idea out of your head.”

“Bill is fine. We just checked on him. Don’t worry about Bill.”

“I am worried about Bill.”

“Bill’s doing fine. Don’t worry about him,” the Authoritarian Man repeated as he rubbed the spot between his bushy eyebrows and sighed. He seemed sincerely distraught about what he was going to do to me. It was probably just a ploy that he had been taught: gain the confidence of the interrogation subject and they’re more likely to spill their guts. I barely felt the injection; out of the corner of my eye I could see him place the syringe back upon a metal tray. He sighed, again, “let’s start at the beginning… okay?”

It began the day that Bill and I got home from the University of Illinois Veterinary Teaching Hospital in Champaign-Urbana. Thirty-six hours before that, a fourth-year grad-student with an immaculate white lab coat and a stethoscope jauntily draped around his neck came out to the waiting area with the
good news
. “Good news Mr. Grant! Bill is now in third-stage arrhythmia!”

I was sleeping, and Bill was sleeping. The weathered window with the green peeling paint was open and outside birds were singing – the squirrels were running up and down the big pine tree and Bill and I were deep asleep – we had beat the Angel of Death one more time; Bill was alive and well.

I don’t remember what I was dreaming of. Bill was running in his sleep; chasing rabbits, butterflies, soap bubbles; we will never know until that day when all mysteries are revealed. The alarm went off, and I woke up, my first thought was of Bill and of the X-ray that the doctor showed me yesterday in Champaign-Urbana: how Bill’s life now – truly and literally - hung by a thin thread that snaked down to his aorta. Bill just snuffled and ran in his sleep oblivious of how precarious his life had become.

If you happen to live with a 135-pound Rottweiler-German Shepherd mixed-breed dog named Bill who has been implanted with a CardioTronic 413 pacemaker (the ‘Dick Cheney' model), as I do, you will be inevitably and repeatedly asked the question, “why in God’s name did you pay for a pacemaker to be put into a dog?”

The day that this all started I found myself struggling to answer this very question – on air – during a live interview with Clark and Lewis the local radio personalities who were trying to fill fifteen minutes of drive time at Bill’s and my expense.

“I mean (
ha! ha!)
you
actually
had a pacemaker put in your dog?” Clark guffawed.

“Why would you ever do such a thing?” Lewis jumped in. “I can’t believe the
gullibility
of some people.”

“Because Bill was going to die without it. Bill’s my partner. I mean Clark, if Lewis was dying, you would do everything you could to help him out, right?” I sincerely answered not thinking. Fifteen seconds of dead air followed as Lewis and Clark stared at each other across the studio.

“He’s sitting in his chair,” I answered, “he’s reading the newspaper. He reads the sports page. He follows the River Rats (our single-A minor league baseball team). He’s worried that Colt Brankowsky is going to get called up before the series with Burlington.”

Bill had a Holter monitor strapped to his back. It was a portable EKG machine that would record twenty-four hours of his cardiac activity and was our part of the deal that got him a pacemaker for $497 at the University of Illinois Veterinary Teaching Hospital. It was just our good fortune (or bad fortune depending on how you looked at things) that Bill was in stage-three arrhythmia at the very time CardioTronic needed a test subject for the new model pacemaker (fuzzy logic and externally programmable) that they were about to install into former Vice President Dick Cheney. It was also our good fortune that Bill was an extraordinarily large canine with a heart as big (if not bigger) than the former Vice President’s. So Bill got the model 413 pacemaker and the new fuzzy logic chip worked fine (thank God and the CardioTronic engineers. The next unit off the production line was implanted in the former Vice President of the United States.

Anyway, it was about two weeks into the new semester and Bill was sitting in his chair – he wasn’t reading the sports page, I made that up – when this all started.

“We know Bill can’t read,” the Authoritarian Man said, “just get on with it.”

Okay, so it was probably around 8:15 in the morning. We were running late because of the Clark and Lewis interview. Bill was still on antibiotics, so I went to the refrigerator, got one of the big horse pills Dr. Farmer had prescribed for him, stuck it in a wad of Braunschweiger (which has got to be the grossest substance invented by man) and gave it to Bill, then I put him in his shoulder harness so we could go walk on to campus. Bill can never again wear a choke collar because the pacemaker is in his neck and the leads run down his carotid artery and into his heart. A choke collar could break the thin wires so he has to always wear the harness now. I got the
tres gros
size; it’s on the last hole but it’s still tight on him. Bill doesn’t care.

It really pisses me off that some people think Bill is stupid just because he’s so big. Dr. Farmer, the Vet that put the pacemaker in Bill, told me that when they went to the cage to get Bill just before the operation they found the door wide open and Bill gone. They get about 10,000 dogs a year at the U of I Veterinary Teaching hospital and Bill is the
only
dog that has ever opened his cage door and went for a walk on his own. They found him in the kitchen sitting in front of the refrigerator. Not the hospital kitchen; but the kitchen where the fourth-year vet students eat their lunches. Anyway, they found Bill just sitting in front of the refrigerator, waiting. He’s the only dog in the history of the U of I Veterinary Teaching Hospital to open one of those cage doors, so don’t ever say Bill is stupid.

The Authoritarian Man didn’t say a word but I could feel his eyes on me
willing
me to go on. It was probably just the benzodiazepine; but either way, I babbled on.

So we - Bill and I - walked down the back stairs of our rented yellow house that was just about 100 feet off campus and across the backyard and out the back gate.