Read The Thrill of the Chase Online 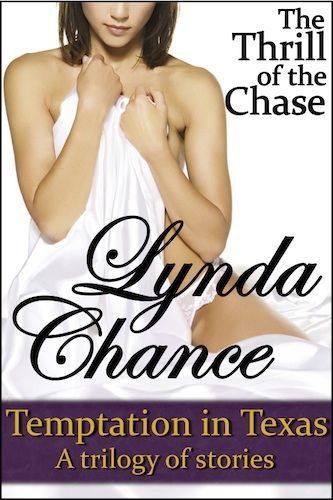 Ashley Weldon runs scared when Ryan McKay puts moves on her that are too hot to handle! The more he pushes, the more she pulls back.

Throw in a hot firefighter, protective girlfriend, some sexting and a Corvette or two, and you have Temptation in Texas, Houston Style!

This is a work of fiction. Names, places, businesses, characters and incidents are either the product of the author
'
s imagination or are used in a fictitious manner. Any resemblance to actual persons living or dead, actual events or locales is purely coincidental.

All rights reserved. This book or any portion thereof may not be reproduced or used in any manner whatsoever without the express written permission of the author or publisher except for the use of brief quotations in critical articles or reviews. Thank you for respecting the hard work of this author.

(To be read in order)

Book One - Ryan and Ashley

"
Do you expect me to marry you first?
"
The frustrated growl that came from Ryan McKay
'
s lips unnerved Ashley Weldon almost as much as the steely, masculine hands fisted around her upper arms.

"
N-no. That would be crazy,
"
she answered with a shaky voice.

His grip tightened.
"
Listen, babe. That night at the club was supposed to be a hook-up, and you shot me down. The third, fourth, fifth date,
you shot me down
. It
'
s been four weeks and I
'
ve lost count of how many fucking times we
'
ve been out. You one of those crazy chicks that think holding out will lead to a marriage proposal, or what?
"

The anger and frustration in his voice put Ashley on edge. No, she wasn
'
t one of those crazy chicks and she absolutely didn
'
t want a marriage proposal. The truth was, she was scared to go to bed with him because he absolutely terrified her. If she hadn
'
t been slightly blitzed the night she met him at the dance club, she never would have let him take her for a two a.m. breakfast. Thank God, she had caught her snap halfway through her second cup of coffee.

Going out a second and third time with him had been sheer madness. Why did she keep doing this to herself? It had been four weeks of constant dating. Four weeks of him trying non-stop to get her into bed. She needed to put an end to it.

He was way out of her league, both physically and intellectually. He had a perfect face, a perfect, steely body corded with muscles and an engineering degree that earned him the big bucks. She had neither. She was passably pretty, she supposed, but she had neither the height nor the education to compete with him. He had the
it
factor, she didn
'
t.

No, it couldn
'
t go anywhere and she didn
'
t particularly want to be another notch in his proverbial bedpost. He was hot, and she was tempted, but why kid herself? The first time he got her naked, she would fall madly in love and his pursuit would start winding down. It was the nature of the beast.
The thrill of the chase
.

She sucked in her breath and prepared to end it before her heart got shattered.
"
I
'
m not holding out for anything, Ryan.
"
She expelled a breath.
"
Look, this isn
'
t going to lead anywhere and I
'
m not going to just sleep with you, so I think
--"

His head swooped down and his lips landed on hers in a punishing kiss that took the thought from her head and the oxygen from her lungs. He pressed her back against the front door of her apartment and caged her in with his body. His tongue swirled around hers and one hand fisted into her hair while the other wrapped around her waist and lifted her into him.

Her body was swamped with his sexual heat, and her mind shut down completely. Just when she thought all was lost, he raised his head and his eyes ensnared hers.

"
Don
'
t even think it, babe
. You
'
re not getting away from me that easy. You want to keep playing hard to get? Fine.
"
His hands squeezed her so hard she had trouble getting in enough oxygen.
"
I
'
ve got a presentation tomorrow night, but I
'
ll pick you up Friday night at seven. Be ready.
"

He bussed her lips one last time, and turned and left her standing on her doorstep.

Friday night, Ashley sat beside Ryan in the back booth of the noisy, chain restaurant, sipping on a glass of white zinfandel and questioning her sanity. Their orders were placed and his attention was fixed on her, while his beer went untouched.

This date was turning out different from their previous ones. The restaurant setting was basically the same, but his attitude had shifted. His play by play rule book seemed to have been closed, the conversational gambit, trying to get to know her phase was completely absent. In its place was a focused, no holes barred Ryan, and the intensity of his personality was both dominant and more than she could handle.

His right arm was behind her on the back of the booth, and his hand played with the lobe of her ear while he stared down at her.
"
You
'
re so
fucking pretty
.
"

Her breath hitched in her lungs and she remained silent.

"
The night we met, you just blew me away. I wanted to touch you, so bad. Did you know I watched you for an hour before I asked you to dance? I watched you sitting on that barstool at the table with your friends, turning the guys away, one by one. I didn
'
t want to be
that guy
, just another guy you blew off. You were so beautiful, and all I could think about was getting you in my arms. And then you danced with that fuckwad. I nearly went ballistic, babe. But it was the kick in the ass I needed to get my nerve up. I
'
d never been scared to ask a woman to dance before
in my life
.
"

"
You grabbed my hand and pulled me from my seat,
"
she said softly.

His fingers moved back and forth over her hair as he smiled in acknowledgement.

His hand fell from her ear and landed on her shoulder, his hand snaking down and caressing her collarbone. He ran his fingers back and forth over her skin. His hand came back to her shoulder and clenched.
"
I want you bad, Ash.
"

Her eyes clashed with his and her stomach clenched in secret delight.

His eyes swallowed her whole, and she couldn
'
t form an answer.

He swiveled his body until he was facing her completely and his free hand landed on her thigh.
"
I want to take you to bed. This waiting is ridiculous, babe. What do you think is going to happen? You think I
'
m going to get my rocks off and never call again?
"

The restaurant was noisy and dark and no one was paying any attention to them. His hand took hers and placed it on his thigh and slowly moved it up until it was cupping the hard heat of him throbbing against his zipper. His hand held hers tightly to him.

Her eyes flew back to his and her heart hammered triple time. His beautiful brown eyes devoured her.
"
Feel what you do to me, babe.
"
His hand threaded through her hair and clenched her scalp.
"
That
'
s for you. Nobody else. This isn
'
t about me getting laid. I can get laid anytime.
"
His eyes dropped to her lips and then slowly raised back to hers.
"
This is about you, babe. Just you.
"

How was she supposed to resist him? Her heart pounded as she realized he was seriously out to seduce her tonight. The easy-going, laid back Ryan had disappeared. In his place was Ryan the seducer.

She was going to cave. She knew she was. She was only human, after all. And she wanted him so very badly, so desperately.

She was saved from thinking when the server placed their meals on the table. Ryan
'
s intensity let up a bit as he picked up his fork and began eating. Her appetite had fled long ago. Her nerves were in shambles and her brain and body were having an internal fight so loud she was amazed that he couldn
'
t sense it.

She picked at her food and took careful sips of her wine.

She felt more than saw him freeze beside her and she looked up to see a tall, stunningly beautiful blonde making her way toward their booth, her razor sharp eyes zeroed in on Ryan.

She stopped beside the table and glared at him, arrows of hate shooting from her eyes.

Ashley watched the other girl
'
s mouth open and she froze when the vitriol began spilling out.
"
You
'
re a fucking douche-bag, Ryan. A sorry no-good piece of shit.
"
The blonde woman looked at Ashley.
"
Don
'
t fall for his shit, girl. That
'
s all it is.
Shit
.
"