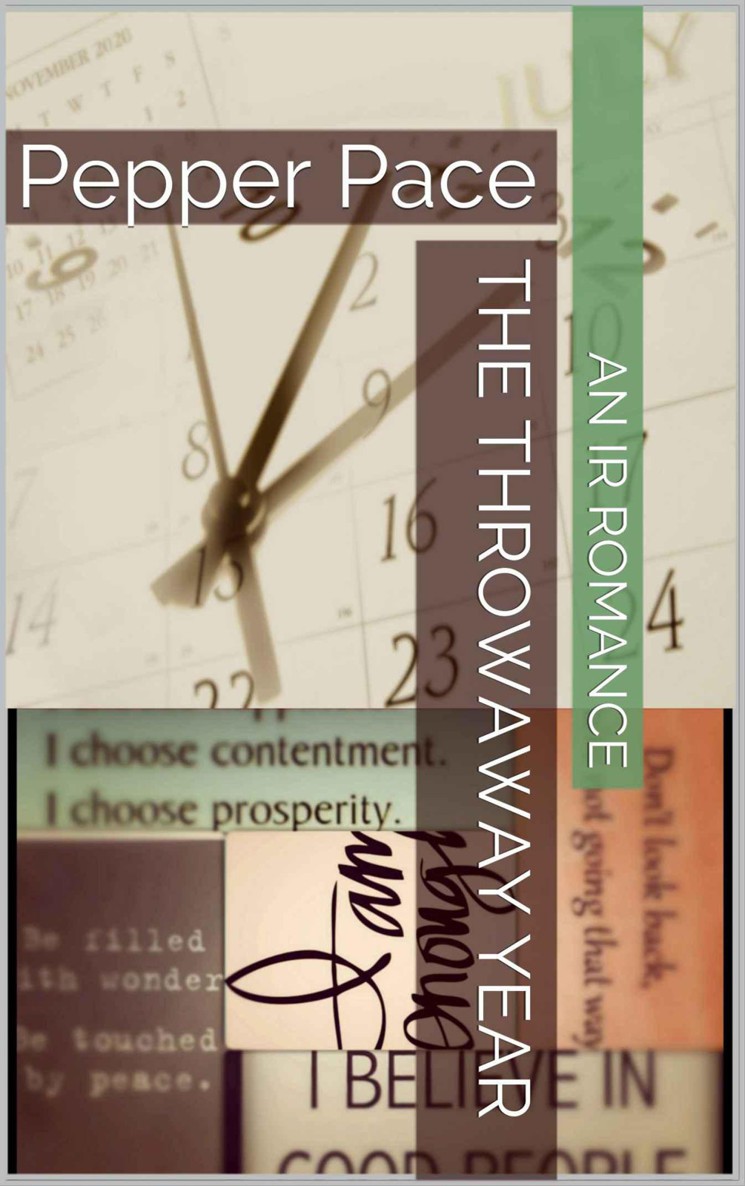 This novella is a work of fiction. Characters – including their names, places and incidents are products of the author’s imagination or are otherwise used fictitiously. Any similarity from this book to events occurring in real life – including locations, or persons living or dead is wholly coincidental. All affirmations used are public domain.

All rights reserved, including the right to reproduce this book or portions thereof in any form whatsoever, except for short excerpts appearing in book reviews. For reprint or excerpt permission inquiries, please contact the author by e-mail at
[email protected]
or http://pepperpacefeedback.blogspot.com

First published and distributed in the United States of America in September 2013.

This book is d
edicated to YOU; my amazing reader who supports independent authors like myself by purchasing this work and not downloading it illegally. You are loved and appreciated!

My Beata reader Leslie worked tirelessly on this project, as did my editor CeCe Monét. My sister-friend Sue gets props for inspiring my logo and all of the readers and authors on the 2013 IR Romance Cruise Event get much love for being my experimental Betas. If you keep reading, I promise to keep writing.

“
I am perfectly imperfect. I strive for better while loving all that I am today. In loving myself today, I am better equipped to improve myself tomorrow.”

“
I am more than my past, my mistakes, my faults, my circumstances, my struggles, or my diseases. I am a magnificent totality of imperfect parts only beautified by my choices, bravery and impact.”

GETTING RIGHT WITH SELF

GETTING TO THE MONEY

THE STRIDES WE MAKE

THE LOSS OF PROGRESS=A FRESH START

HOW TO TREAT A FRIEND

LIVING IN THE TRUTH

NO PROMISES NO LIES

THE YEAR THAT HAD NEVER BEEN THROWN AWAY

A RIPPLE IN THE WATER AND THE SMELL OF MORNING SEX

A PERSON BENEATH ME CAN’T HURT ME

A WONDERFUL CAPACITY FOR HEALING

It was Sunday morning and Hayden had no desire to get up and dressed to start her day.  The TV was turned on to The Food Network and Paula Deen was cooking something deep-fried, fattening, and more than likely also deadly.  Hayden’s stomach grumbled--right now she would eat ten of whatever Paula Deen was cooking!

MyKell was laying quietly, eyes staring at the TV screen.  He’d been quiet all weekend.  “Hey, you want to go to The Cracker Barrel for lunch?”  They had lazed through breakfast and now it was early afternoon.  MyKell’s eyes
seemed to flinch.   “I’m paying,” she interjected before he could object.

MyKell put the cheap in
cheapskate
.  He was 42 and had just gotten his first decent paying job since they’d been together.  All of his other jobs had been in sales where he barely raked in enough commission to cover his own personal expenses, let alone enough to help her out financially.  They had been together for nearly six years, so Hayden knew the routine.  If she wanted to go out to eat then it would be
her
treat.

MyKell turned to her slowly.  “Hade, I need to talk to you.”

Oh shit.  He’d lost another job.  The hell with this! He’d only been working at the new place for six weeks-

“I met someone else.”

Hayden blinked.  “What?”  Her heart had momentarily frozen in her chest and was now fluttering rapidly against her ribcage.  MyKell pulled himself out of the bed, looking like someone had socked him in his stomach instead of the other way around…

How could he be saying this when they’d just made love last night?  She had picked him up from work Friday and for once they’d had a good evening.  He had allowed her to ramble on and on about work and her best friend Dani’s problems with her man of the hour.  He had actually listened to her intently without rolling his eyes and stating that he was tired of hearing about her whiny-ass friends.

Was that why?  Was he only being nice to her because he knew that he was going to do this? Her breath froze in her throat as she watched him pull on a jogging suit; a 42 year old man that dressed like a 22 year old in his Sean Jean urban gear and Timberland boots.

Every new thought brought another crashing pain.  She was
35 and had given this man six years of her life and now that he had finally gotten a decent job, he was leaving her.  It was her house that he had moved into because why should two struggling people have two households?  It was also her paycheck that had kept them fed when he quit a job because it was yet another low paying job not worth his time.  Hayden felt the tears burn the back of her eyes, but she thought that she would rather die than to let him see her cry.

She already felt foolish enough.
Things hadn’t been right for a while
… but she hadn’t known that. MyKell placed a suitcase on the bed and began loading things into it.  He was talking about making arrangements to pick up the rest of his things.

She wanted to get up
, but she couldn’t.  Beneath the bed covers she was still naked and… well, he already had someone else.  How could she let him see her naked when he had another woman?  She quickly averted her eyes. She wouldn’t look at him because then she would see that tall caramel colored man that she remembered from six years ago; with his toned body and thick curls due to his mixed Black and Hispanic heritage.

Back then she was pushing thirty and convinced that she would never find a man that would want her for more than just a booty call or a stepping stone to something better.
So even though now he was a lot less muscular and a whole lot greyer, she didn’t see that because he would always be that fine man that had chosen her. Hayden realized that the real reason she couldn’t look him in the eyes was because she was afraid that she would see in them just what she really was to him; a fat, short, yellow skinned, freckled face Black woman with kinked out sandy red hair.

“Just take
all your things now.”  Her voice was a whisper even though she was trying to speak normally.  She gripped the bed covers and slid to the end of the bed while he watched her with his dark, hurt eyes.

There was a pile of clothes on the floor; hers, his.  She picked up the panties that she’d shed the night before and pulled them over her big thighs, knowing that he could see the crack of her ass when she bent over.  She quickly put on yesterdays jeans and a t-shirt, both were dirty, but it at least didn’t require her to walk across the room to t
he dresser for something fresh.

She dressed quickly wondering when he had met her; this other woman.  Was it someone he worked with?  Someone she knew?  She wasn’t going to watc
h him walk out the door because… yes, he was the one leaving her, but she wouldn’t watch him do it!

The tears were running down her face suddenly, but she kept her head down so that he wouldn’t see.  She would die if he saw her crying.  He’d used her, faked it with her, but
when he left, she would at least still have her dignity.

“I’m going to leave
now.  When I come back… if you could just not be here…”  Then she hurried out of the room and down the hall as the first sob forced its way from her mouth and the hot tears blurred her vision, dripping down her face and from her chin.  She grabbed her purse and slipped on flip-flops and then she was hurrying out of the house and to her car.  MyKell didn’t have a car but… well, he had someone else and
she
probably had one.  Yeah, chances are, she would have one.

How to Lasso a Cowboy by Jodi Thomas, Patricia Potter, Emily Carmichael, Maureen McKade
The Avalon Chanter by Lillian Stewart Carl
Answered Prayers by Truman Capote
Slow Burn by V. J. Chambers
Rocked to the Core by Bayard, Clara
Horse Sense by Bonnie Bryant
The Cost Of Love And Sanity by Jaye Cheríc
Cloak and Spider: A Shadowdance Novella by David Dalglish
Murder on Safari by Elspeth Huxley
The Hidden Oasis by Paul Sussman
Our partner