Read The Towers of Samarcand Online

The Towers of Samarcand 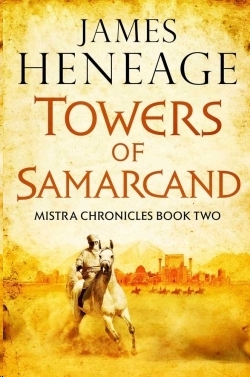 First published in Great Britain in 2014 by Heron Books

The moral right of James Heneage to be identified as the author of this work has been asserted in accordance with the Copyright, Designs and Patents Act, 1988.

This book is a work of fiction. Names, characters, places and events portrayed in it, while at times based on historical figures and places, are the product of the author’s imagination.

The Mistra Chronicles
The Walls of Byzantium
The Towers of Samarcand

To my mother and father

PART ONE
The Camp on the Steppe 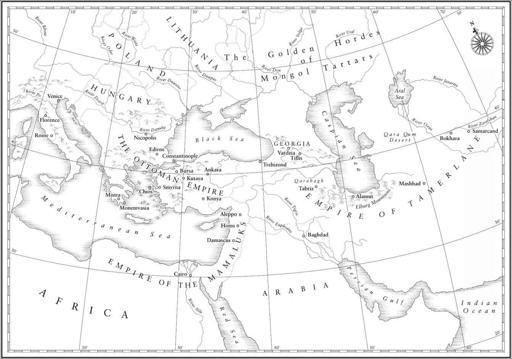 A party of five stood on the hill of Kosmidion overlooking the city of Constantinople: the Sultan Bayezid, his three sons and the Grand Vizier, all cloaked and furred against the winter wind that swept in from the Bosporus. They held cloths to their faces.

The rain had stopped at last and a sudden shaft of sunlight ignited the spearheads on the city walls. There were pitifully few these days. Constantinople, the last gem in the empty crown of Byzantium, was a place of fields and orchards and churches whose domes no longer wore the gold to ignite.

A few of the city’s garrison had emerged in sortie the night before and now stood behind, spread-eagled in crucifixion as their saviour had been, the stench of their decay all around. Bayezid spoke through his mask.

The Ottoman Sultan had been known as Yildirim in his youth: ‘Thunderbolt’. He was fourth in the line of Osman and had astonished the world by the speed of his campaigns to quell the
gazi
tribes of Anatolia and stretch his empire to the banks of the Danube. Now he was a man addicted to wine and sugar
whose size of turban mirrored the size of his belly. His heir, Suleyman, stood on one side and his second son, Mehmed, on the other. They were as different as their mothers: Suleyman tall and pointed of nose and beard, Mehmed smaller, his gazi roots there in a face as flat as the steppe. Bayezid’s third son, Musa, stood a little behind and was yet to be bearded. The brothers hated each other.

Suleyman patted his horse, flicking water from its mane. ‘We need cannon of a size not yet created, Father,’ he said. He raised his hand to the city beneath them. ‘Behold the strongest walls in the world. We can throw a million men at them and they’ll not break. We need cannon big enough to smash them, and they’re made in Venice.’

A drumbeat sounded from somewhere distant. Half-naked men worked to its tempo, hauling forward the trebuchets, mangonels and other machines of war that would wreak what havoc they could until the cannon arrived. In front stretched the open wound of the Ottoman siege lines, livid with newly dug earth. A lot had been accomplished in the two months since this army had marched away to Nicopolis.

The flower of Christendom had come west, jousting and drinking its way to do battle with Bayezid on the Danube. It was, they said, an army that could hold up the sky with its lances. But the sky had come down on its boasting and ten thousand Christian corpses lay on the field of Nicopolis. The victory had been Bayezid’s and it had sent shock waves through the courts of Europe. He had boasted:
I will water my horses at the altar of St Peter’s in Rome
, and before him was the only thing that stood in his way: the walls of Constantinople.

Constantinople: the second city of seven hills to serve as
capital of the two-thousand-year Empire of the
Rhomaioi
. Once it had been the meeting place of the world, the gilded bridge between Christian West and the lands of the Prophet, the Dar ul-Islam. Now the empress’s jewels lay in pawn in Venice and her city hid behind its colossal walls beneath the early darkness of an iron sky.

A rainbow had appeared above the city, a curve of colour, heaven’s favour poured into its battered chalice on earth.

Bayezid looked up and then turned to his sons. ‘The sickle of Islam poised,’ he said. ‘When do we get our cannon, Prince Suleyman? We can’t wait for Venice.’

Mehmed edged his horse closer to his father’s. He spoke across him. ‘Didn’t you say there were cannon in Mistra, Brother?’ he asked.

Suleyman frowned. ‘Only small ones. Not big enough.’

‘Yet cannon, nonetheless,’ said Bayezid, remembering. He looked at his heir. ‘You will bring them.’

Suleyman opened his mouth to protest. This siege was where he belonged. It was to be his triumph.

But there are other things to bring from Mistra
.

The woman who’d sworn to submit to him was in Mistra and it was time for her to be returned to him. 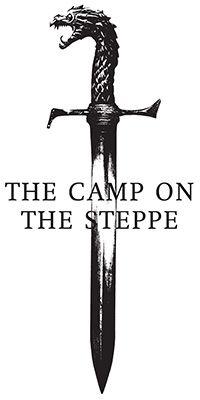 The first snows came as the old man turned to leave; great balls of it as big as babies’ fists that stuck to his beard like dough.

Omar, the holy man from Konya, had brought Luke Magoris to the forty or so
ger
s that made up this Germiyan camp far out on the steppe. Around them was distance with no horizon. The snow had turned the landscape into a limitless white without shape or feature that somewhere, far away, became the sky. For Luke, a boy born into the bustle of a little city on the edge of the sea, it was beyond comprehension.

Their reception had been as cold as the weather. The business at the monastery had delayed them and made the tribe late in moving to their winter pastures. And the snows were early this year. Luke looked around him at the sullen faces.

The old man looked up at the sky through crinkled eyes, then back at Luke, wiping snow from his lips.

‘These are good people, Luke,’ he said. ‘Their movement makes them honest. “A little rivulet which is moving continually does not become defiled.” There is truth in that.’

‘The poet Rumi. The saint of Konya, where I must now go. The saint calls and I’m not good in tents.’

‘You learn their language, Luke. You learn to ride and shoot like a nomad, like a Mongol.’ He turned his horse, stopped and looked back at Luke, his fist on his saddle. ‘Like Tamerlane.’

Then he was gone.

Two men approached dressed in coats with fur linings and embroidered hems and looked similar enough to be related. Father and son, Luke guessed, and the leaders of this camp. They stopped in front of Luke. The older man spoke, turned and walked away; the younger stayed. He pushed Luke to his knees in the snow. Stepping closer, he lifted Luke’s chin and spat. He jabbed his chest with his finger. ‘Gomil.’

The first night was the worst. Long after they’d eaten, the ger was still dense with smoke and Luke’s eyes stung. He wiped them with the back of his hand and looked down at the sword hilt resting across his chest, its dragon eyes staring back into his. Six hours had passed since Omar had ridden away, leaving him only this sword and a line from Rumi. He’d never felt so alone.

He’d dined in miserable silence,
s
ix wary eyes watching him through the gloom. They belonged to the family with whom he was to live: Torguk, his wife Berta, who suckled a child at her breast, and their daughter Arkal, her crippled foot tucked beneath the folds of her
deel
.

They’d fed him the thick mutton stew that would be their diet until the tribe’s sheep were too few for slaughter. He’d watched them suck the meat from the bones and wash it down
with soured mare’s milk. And when he’d finally lain down to sleep, the smell of mutton and putrid milk had punctured the membrane of his dreams.

Now he lay awake and thought of his home in Monemvasia. He saw it from afar, perched on its fist of rock thrown out into the Mirtoon Sea. He saw its narrow, climbing streets, cobbles wet with the tread of a sixteen-year-old boy come in from the sea. Was it only four years since he’d left? He thought of Mistra, where he’d never been: sixty miles distant from Monemvasia yet so different: a place of church and ceremony where the Despot ruled amongst the saints. Two cities side by side. Two destinies: love and duty, Anna and Tamerlane.

Plethon’s plan, his destiny: to bring Tamerlane west to fight Bayezid. To bring one monster to kill another. He closed his eyes and there was Anna. He’d last seen her standing before him as he knelt beneath Suleyman’s sword on the bloody field of Nicopolis. A whisper.

Are you with Suleyman?

Sleep drifted in like a mist and the whisper rose to the crash of a storm at sea. He was in waves bigger than continents, waves that hid the sky. He saw a rain-lashed jetty and a giant swinging an axe until the axe fell. He saw Anna being dragged down that jetty. Away from him.

Are you with Suleyman now?

The next morning Luke was shaken awake by the girl Arkal. She watched him shyly through her dirt and handed him a cup of salted tea. The salt stung his blasted lips. For a long moment they looked at each other. Luke put down the cup.