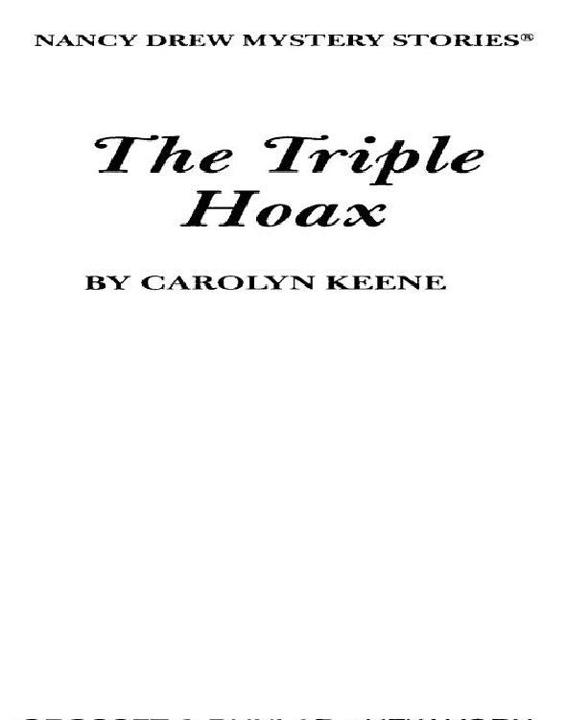 AUNT Eloise Drew invites Nancy, Bess, and George to New York to help a friend who has been swindled out of a sizable sum of money. There the girls see a performance of the Hoaxters, a magicians’ group, who stun their audiences by clever sleight of hand tricks. Because the magicians temporarily remove people’s wallets and handbags, Nancy feels the actors aren’t above suspicion. Her hunch is borne out and a whirlwind chase ensues.
Nancy, Bess, and George track the Hoaxters to Mexico City, where Nancy is asked to help find a kidnapped child. The young sleuths follow a lead to Los Angeles where danger confronts them at every turn. Their enemies resort to theft—even arson—to scare them off the case.
With courage and clever deduction, however, Nancy and her friends outmaneuver their cunning adversaries and, after solving the puzzle of the Triple Hoax, bring them to justice.

The scanning, uploading, and distribution of this book via the Internet or via any
other means without the permission of the publisher is illegal and punishable by law.
Please purchase only authorized electronic editions, and do not participate in or
encourage electronic piracy of copyrighted materials. Your support of the author’s
rights is appreciated.
Copyright © 1979 by Simon & Schuster, Inc. All rights reserved. Published in 2005
by Grosset & Dunlap, a division of Penguin Young Readers Group, 345 Hudson Street,
New York, New York 10014. NANCY DREW MYSTERY STORIES® is a registered
trademark of Simon & Schuster, Inc. GROSSET & DUNLAP is a trademark of
Penguin Group (USA) Inc. S.A.
eISBN : 978-1-101-07758-0

1
A Sudden Trip
“Dad! Aunt Eloise wants me to come to New York immediately to solve a mystery!” eighteen-year-old Nancy Drew called out excitedly.
Carson Drew, a well-known attorney in River Heights, looked fondly at his attractive, titian-haired daughter as she returned to the breakfast table. “What kind of mystery?”
Nancy waved a special delivery letter that the mailman had brought. “Listen to this. I’ll read it to you.
“Dear Nancy,
A close friend of mine, Mrs. Annabella Richards, has been swindled. She taught in the same school I do, but left a few years ago to marry a wealthy man. He died not long ago, and Annabella is a rich widow. I won’t give you any more details now, but I certainly hope you can visit me and help her. Bring your friends Bess and George if you like, and say hello to my brother for me.
Lots of love,
Aunt Eloise”
“Well, Dad, what do you think?” Nancy asked.
Mr. Drew laughed. “I think that you want to go and I see no reason why you shouldn’t. The mystery sounds interesting. I’ll be eager to hear more about it.”
Nancy jumped up, kissed her father, and hurried to the telephone. First she called George Fayne, a slender, dark-haired girl who enjoyed her boyish name. Then she contacted George’s cousin Bess Marvin, who was a slightly plump, pretty blond with dimples. Both girls loved to help Nancy on her mystery cases, and together they had solved many of them.
Bess and George were keen to join Nancy on her trip to New York. Their parents, after some persuasion, furnished the money. It was arranged that the young sleuths would leave River Heights the following day.
As Nancy packed her bag, the Drews’ lovable housekeeper, Mrs. Hannah Gruen, came into the girl’s bedroom. She had lived with Nancy and her father since Mrs. Drew’s death, when Nancy was three years old, and had been like a mother to her. The two had shared many secrets and adventures.
“Nancy,” Hannah said, “judging from past performances, you’re likely to get into all sorts of ticklish situations. I beg you to be careful. You know you’re an indispensable member of this household!”
Nancy chuckled. “I’m glad to find out I’m really needed here. But you know, when I’m working on a case, it’s pretty hard to keep from running into danger.”
“I know,” Hannah agreed. “Your father and I will be wishing you the best of luck all the way.”
The following afternoon Mr. Drew drove the girls to the airport. They boarded a plane that took them directly to La Guardia Airport in New York. After debarking, they were met in the terminal by Nancy’s tall, attractive Aunt Eloise and her friend.
“Nancy, it’s wonderful to see you!” Miss Drew exclaimed. “And Bess and George. I want all of you to meet Mrs. Annabella Richards.”
After hugs, kisses, and excited welcomes, the group walked outside and awaited Mrs. Richards’s chauffeur-driven car. Ten minutes passed, but it did not arrive.
The annoyed woman frowned. “Roscoe is always so prompt and reliable,” she said. “I can’t understand why he isn’t here.”

“Could you tell us something about your mystery while we’re waiting?” Nancy asked.
Mrs. Richards nodded. But before she could begin, a strange man walked up to her. “Are you Mrs. Richards?” he asked.
“Yes.”
“Your chauffeur, Roscoe, sent me to tell you your car won’t start.”
“Won’t start!” the woman exclaimed. “He drove me here a little while ago and there was nothing wrong with the car. In fact, it was serviced recently.”
“I don’t know anything about that, ma’am,” the stranger said. “Roscoe suggests you go home by taxi.” With that, the man turned and walked off.
Mrs. Richards frowned. “I don’t understand it,” she remarked. “Well, I guess we’d better go.”
She summoned a limousine and the five climbed inside. As the car pulled away, Mrs. Richards said, “I suppose Eloise has told you a little of my situation.”
Nancy had a sudden hunch. It might be best if Mrs. Richards did not reveal her story for the taxi driver to hear.
She leaned over and whispered into the woman’s ear, “Don’t reveal any of your secrets now.” Mrs. Richards nodded and changed the subject. The conversation became general until the group arrived at Aunt Eloise’s attractive apartment.
Then Mrs. Richards went on with her story. “My husband was very kindhearted and charitable. He donated money to large and small organizations, and even to individuals. After his death I carried on this tradition, but the work became too much for me. I finally hired my husband’s former secretary, who promised to take care of everything so I could go on vacation. About that time, a travel agent contacted me and offered a wonderful bargain world tour.”
“Sounds fabulous,” Bess said dreamily.
“It did,” Mrs. Richards agreed. “The agent showed me enticing literature and I fell for it. A few days later he brought the plane tickets and hotel accommodations, and I paid him $3,000. It was too bad that I had not investigated the whole thing.”
“Why, was something wrong?” George asked.
“Indeed it was. When I went to the airport, the airline named on the ticket had a counter, but no such flight.”
“How dreadful!” Bess exclaimed. “And you paid all this money to a swindler?”

Coiled Snake (The Windstorm Series Book 2) by Katie Robison
Edge of Moonlight by Stephanie Julian
The Curse of the Wolf Girl by Martin Millar
Choked Up by Janey Mack
- - End of All Things, The by Bryan, Lissa
Sabotage (Powerless Nation Book 3) by Ellisa Barr
BeSwitched, Paranormal Romance by Molly Snow
Combust: A Devil Chaser's MC Romance by Wilder, L
Twisted by Andrea Kane
Highland Belle by Patricia Grasso
Our partner