Read The True American: Murder and Mercy in Texas Online

The True American: Murder and Mercy in Texas 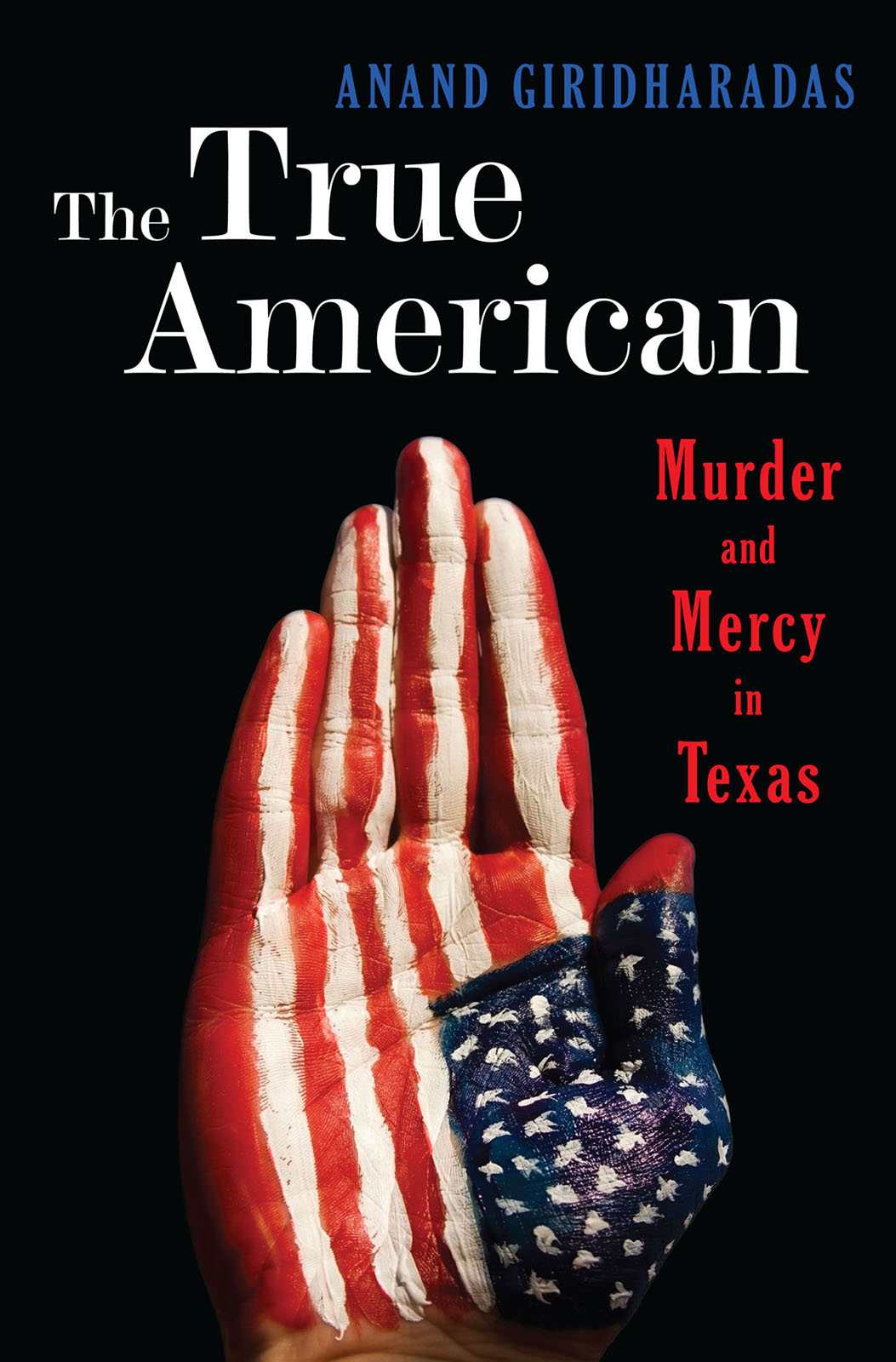 MURDER AND MERCY IN TEXAS

an American, and
my forever girl, my witness

This is a true story. Although my movements as an author remain invisible in the text, the book has been carefully and densly reported from a wealth of records and testimonies that I am grateful to have tapped. These include dozens of hours of taped interviews that I conducted with the characters in, and witnesses to, the drama; video footage and text from the interviews done by others; personal correspondence; news reports; many thousand pages of legal documents spanning court transcripts, academic records, medical and psychological assesments, police and probation reports, among other things; a large volume of photographs and videos; and more. Of course, this story, like so many stories, relies so much on the memories of its subjects; in this case, a group of people mostly unknown to one another—living around Dallas, Texas, but from the world—who, through some strange permutation of fate and choices, found themselves tossed into this storm.

E
very so often, a customer walked into the mini-mart at South Buckner and Elam Road and offered Raisuddin some reassurance. Perhaps they noticed his olive T-shirt and bright sneakers, and interpreted them as he had hoped: as the dress of a rising man, not a typical gas station worker. Or perhaps they heard in one of his newly crafted conversation starters some unexpected flair. In these moments, they might speak to Raisuddin or simply smile in a way that pleased him. They knew he was not of this place.

It was 2001. He had arrived in Texas at the start of the summer. He came from Dhaka, in Bangladesh, by way of two years in New York City. Here on the fringes of the Dallas metroplex, he began his days at 5 a.m., dressing quickly at his boss’s house, where he was living, and rushing to get behind the counter before dawn. He sold Country Time lemonade and Tahitian Treat punch, Coors Light and ten-cent candies, Gillette razors and Copenhagen tobacco products until midnight or 1 a.m., mining the
Dallas Morning News
for sports
scores and other flint for counter chatter, trying out on customers the pleasantries he was still learning, squeezing in as many of the five prayers as he could manage. Then he returned home to shower, eat, and catch his winks before the cycle resumed.

Selling Americans three tamales for a dollar was a strange landing for a twenty-seven-year-old who had trained to command fighter jets and qualified as a Microsoft Certified Systems Engineer. But so it is with the many who leave their native soil and find that to rise, they must first sink into the fresh earth below. Raisuddin was no longer a Bangladesh Air Force man. He was a Buckner Food Mart man.

T
HE MINI-MART WATCHED
over a barren corner of a luck-starved neighborhood. It lingered in the badlands between the central Dallas whose gentry regard the city as a second Los Angeles and the more rustic neighborhoods to the east. Drive one way out of the store, and it was easier to find vegan and Ashtanga than barbecue and two-step. Drive the other way, and within minutes the setting could be more redolent of Mississippi: the RVs turned home extensions, the Confederate-flag license-plate holders, the fenced-in horses, the slouching wooden cottages, the outdoor exhibition of those possessions that failed to fit inside.

To an immigrant like Raisuddin, the economy around the mart might have appeared rather desolate. It wasn’t the economy of the legendary firms where third-world boys like him fantasized about working, of Boeing, IBM, Procter & Gamble—names whose appearance on a business card one day might be enough to soothe the pain of leaving home. The commerce in these parts was of consumption more than production: a repeating chain of gas pumps like his, tire shops, cheap eats, and financial agencies offering to move money across gradients of space and time—turning $100 cash here into $83
in Oaxaca or the $350 paycheck you were due on Friday into $300 right now.

Like much of the world, Raisuddin grew up with America on his television screen, so that he felt he knew it before he set foot there. As a young man, he thought of the place in exalted terms: “It’s like one of the happiest, the richest, countries in the world, without any problems—that was the image. It’s the land of opportunity. Whoever goes there, you can be whatever you want to. The tools are there; you use the tools. It’s up to you. Not like Bangladesh, where there is limited opportunity, and there are millions of people fighting for a small opportunity.”

He came from an often brutal country, no doubt: the electricity that sizzled off whenever it wished, the rain that withheld itself until it arrived with lethal gusto, the factories that imploded and buses that soared off mountainsides and swollen barges that drowned. But in these things, as in life generally, you were rarely alone—even when you wanted to be. People lived thickly in one another’s business, their presence at once invasive and soothing. The constant din of parents and siblings and in-laws staved off self-pity. The customary ways of eating and marrying and caring for elders held communities together and kept hurting people on the path. People threw weddings that took a lifetime to pay off, because they knew they would need a tribe even more than the money.

Of course, this connectedness hadn’t been enough to keep Rais—the shortened name by which he introduced himself to Americans—in Bangladesh. Still, he was struck by how people in Dallas seemed to lack for each other far more than for bread or bus passes or a roof overhead. “So much lonely, so much alone, even detached from their
own family,” he said of the lives around him. They drove up to the food mart in their boat-cars, alone. They ate in their quickie restaurants, alone. They pinned what hopes they had of tranquil aging on scratch-off lottery tickets, not ardent children.

A fearsome wildness could thrive amid this isolation. The people around Rais seemed to him to live largely unobliged to their parents, their teachers, even in many cases their God. They had no one to answer to. Every man for himself, they sometimes called it. Four months at the Buckner Food Mart was plenty of time to discover what a terrifying idea that was. He was coming to see how the poverty of a place that is breaking can differ from the poverty of a place still being made.

Just since May, on more than one occasion, Rais had been behind the counter, waiting, when the front door would open and a customer appear. He would hand Rais a credit card for gas, then go outside to fill up. As the man pumped, Rais would be inside swiping the card over and over, wondering what he was doing wrong—until he realized that it was a dead card, that the man had no intention of paying and had already fled with $40 worth of liquid loot. This in the richest country in the world. Or there were the boys, still young enough to sit on their mothers’ laps, who sauntered into the Buckner Food Mart and stole candy and gum. Or the recurring—and, on one occasion, strangely fastidious—condom thieves.

One night, after the time of the Isha prayer, around nine or ten, Rais saw two young men huddled in the corner. He came out from behind the counter to check on them, which made them scamper for the exit. He ran to where they had been hiding and there saw a three-pack of condoms ripped open, with two of the rubbers missing. At least they had the grace to steal only what they needed that night. Rais followed them out of the store and insisted that they pay for what they’d taken. They told him to “back off.” He promised to do so once they paid. After all, things cost money, and Rais was answerable to his boss—didn’t they see? Then one of the boys flashed what
looked like a gun and reiterated his advice to back off. Rais reconsidered his stance: “After that—whoa, I don’t wanna lose my life for a pack of condoms—I said, ‘OK, you don’t have to pay.’ ”

One afternoon near summer’s peak, a man walked into the mart, fetched a soda from the cooler, and gave Rais a dollar bill. When the register opened, the man pulled out a gun. Rais, who took pride in the evenness of his keel, knew there was nothing to be alarmed about: “Many a times in the gas station, people used to come and sell their personal belongings—computer monitor, TV, this kind of thing—all the poor people in the neighborhood. So I thought this guy wants to sell that gun as well. Because he’s a customer; it’s two o’ clock. In my mind, robbery happens in the dark. Robbery happens at night—in a less crowded place, but not in a gas station at two o’ clock in the afternoon. And, plus, he bought a drink, so he’s a customer.”

Rais began the negotiation: “You wanna sell? How much?”

“No, amigo, give me the money,” came the puzzled reply.

“No, no, amigo, give me the money,” the man repeated, growing agitated.

Rais tried again: “Yes, I will give, but how much you want for the gun?”

The man cocked the pistol and pressed it into Rais’s forehead, which roused the dormant soldier within him: “From my military experience, I knew he’s about to shoot, because he cocked the gun. And I said, ‘OK, OK, don’t shoot me. Here’s the money.’ ” Rais removed some modest green stacks from the register and handed them over. The incident left him irritated with himself, because Bangladeshi military training specifically covered one-on-one gunfights.

WANTED (A Transported Through Time book) by Scott, Amber
Barefoot Bay: When You Touch Me (Kindle Worlds Novella) by Marilyn Baxter
Opulence by Angelica Chase
Chasing Paradise (Chasing Series #3) by Pamela Ann
The Horror Squad (Book 3) by Weeks, TJ
A Perfect Knight (Knights of Passion Series 2) by North, Evie
A Winter Awakening by Slate, Vivian
The Rake by Mary Jo Putney
The Perfect Lover by Penny Jordan
Beauty and the Duke by Melody Thomas
Our partner