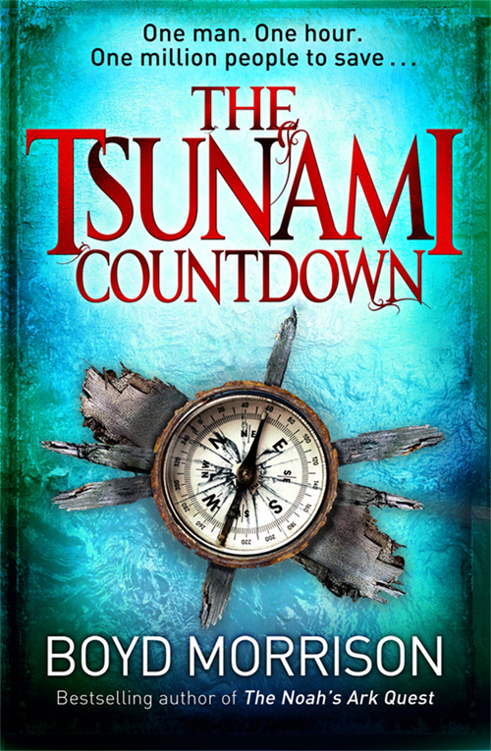 ‘Boyd Morrison’s novel,
The Noah’s Ark Quest
, is a stunning thriller with a premise as ingenious as it is flawlessly executed. Lightning-paced, chillingly real, here
is a novel that will have you holding your breath until the last page is turned. One of the best debuts I’ve read this year’
James Rollins

‘The coiling plot crackles with tension and imagination from the first to the last page. It’s a heart-thumping ride, firing
on all cylinders. One not to be missed’
Steve Berry

‘When it comes to thrillers, Boyd Morrison has the Midas touch.’
Chris Kuzneski

‘A bang-a-minute blockbuster’
The Times

‘A roller coaster ride of gun-blazing action, fascinating historical references, and a nail-biting battle of wits … Move over
Dan Brown, and give Boyd Morrison a try’
Lisa Gardner

‘A rip-roaring thriller which has the reader entranced from first page to last … Hold on tight as the pace is akin to that
of a white water raft ride – furious bouts of life-threatening action then a spell of calm before the next onslaught on your
senses!’
CrimeSquad.com

‘The perfect blend of historical mysticism and clever, classical thriller plotting. Imagine the famed Ark rediscovered and
reinvented to form the seeds of a modern day conspiracy. Boyd Morrison manages that flawlessly in this blisteringly-paced
tale’
Jon Land

All characters and events in this publication, other than those clearly in the public
domain, are fictitious and any resemblance to real persons, living or dead, is purely
coincidental.

An earlier edition of this novel was originally published as
an ebook called
The Palmyra Impact
.

All rights reserved. No part of this publication may be reproduced, stored in a
retrieval system, or transmitted, in any form or by any means, without the prior
permission in writing of the publisher.

Have you read these other thrillers
by Boyd Morrison?

To Frank and Arden. I’m so glad it’s you.

I’d like to thank Dr Chip McCreery and Dr Stuart Weinstein at the Pacific Tsunami Warning Center for listening to my wild
stories and showing me around the facility. Thanks also to Delores Clark of NOAA for assisting in setting up the tour.

Much appreciation to Dr David Kriebel, professor of ocean engineering at the Naval Academy, for information about the effects
of tsunamis on structures.

Thanks to Ray Lovell at Hawaii State Civil Defense for talking to me about HSCD response procedures in emergencies.

Thanks to pilot Doug Skeem for his advice on helicopters.

Thanks to my good friend Dr Erik Van Eaton for his medical expertise.

It’s great to have a brother who was an Air Force pilot, and I’d like to thank him – retired Lt Col Martin Wester field –
for his help with all things military and airborne.

Susan Tunis and Frank Moretti provided invaluable input on this book at an early stage, and Machelle Allman
and TJ Zecca were readers who gave the book an early boost when I needed it.

This book wouldn’t be in your hands if it weren’t for the tireless efforts of my agent, Irene Goodman, and my editor, Abby
Zidle. I’m grateful for everything they’ve done.

Finally, thanks to my wife, Randi, for going on this journey with me.

Any errors in science, organizations, or geography, whether intentional or not, are mine alone. Any resemblance to real persons,
living or dead, is purely coincidental.

Civilization exists by geologic consent, subject to change without notice.

C
aptain Michael Robb opened his eyes and found himself lying on the cockpit floor. Heat washed over him as if the airliner
had been plunged into a blast furnace, and multiple warning horns blared. Blood trickled from his brow, stinging his eye.
For a second he lay there, dazed, wondering what had happened. Then he remembered. The impact. He had just returned to the
cockpit, swearing off coffee for the rest of the trip. It had been his third trip to the lavatory, and the flight from Los
Angeles to Sydney wasn’t even halfway over. His copilot, Wendy Jacobs, a good twenty years younger than he, had smirked at
him but said nothing. He had been about to climb back into his seat when a streak of light flashed by the airliner’s starboard
wing.

Robb thought it was a lightning strike from the storm they were flying above, but then the plane was thrown
sideways, as if batted away by a giant hand. A sonic boom blasted the plane, and he smacked into the bulkhead, his head and
shoulder taking most of the blow.

He must have been out for only a few seconds. Though his mind was still fuzzy, his vision quickly came back into focus. Robb
sat up and wiped the blood from his eye. The instrument panel was intact. Jacobs had disengaged the autopilot and grabbed
the yoke, which she now fought for control. Robb pulled himself to his feet. He had no idea how badly he was injured, but
he was moving. That was enough.

As Robb clambered into his seat, he glanced at the cabin differential pressure gauge. Its needle was pegged at zero. Explosive
decompression.

Reflexively, he reached for the mask hanging to his left, years of training taking over. His shoulder protested the motion,
and he winced in pain.

“Oxygen masks on, one hundred percent!” he shouted.

Robb pulled the mask over his head, and Jacobs did the same. The masks in the passenger compartment had already dropped automatically.
He mentally raced through the possibilities for the blast. A terrorist bomb? Missile attack? Fuel tank explosion? To depressurize
that fast, some of the passenger windows must have blown out, maybe an entire door. The aircraft was still flying though,
so that meant the fuselage was intact.

With his attention focused on getting the airliner under control, there was no time for Robb to talk to the passengers. The
flight attendants would have to deal with them. The best thing he could do for the passengers was to get the plane down to
ten thousand feet, where there was breathable air.

He pushed the yoke forward and silenced the decompression horn, but another one continued to wail. The lights for the starboard
engines flashed red, meaning both were on fire.

“Pull number three engine T-handle!” Robb barked out. He suppressed the panic edging into his voice.

Jacobs pulled the handle and pressed the button beneath it, extinguishing the fire. She glanced out the starboard window to
make a visual check.

“Sheared off from the pylon.”

Robb cursed under his breath. His 747–400 was certified to fly with only three engines, but with just the two port engines
they’d be lucky to stay in the air.

He turned to Jacobs. Her face was ashen but otherwise professional.

Jacobs nodded, understanding the implications. Even if
someone heard the radio call, it would make little difference. The best they could hope for was to report their position in
case they had to ditch. She keyed the radio.

“Activate the emergency transponder,” Robb said. He knew activating it was a useless procedure. They were beyond the range
of any radar units.

As their rapid descent took the plane through thirty thousand feet, an unearthly glow bloomed within the cloud cover ten miles
to their right. At first the clouds softened it, but then the light pierced them, shooting toward the stratosphere, for a
moment brighter than the sun.

“What the hell?” Jacobs said.

A fireball rolled upward in the distinctive mushroom shape Robb had seen in countless photos. He gaped, mesmerized by the
sight. Atomic weapons testing in the Pacific had been outlawed for years, and there were no volcanoes in this region of the
ocean. What else could have caused such a massive explosion?

Whatever it was, the explanation didn’t matter.

“Roll left!” he yelled. Stabilizing the plane should have been his highest priority, but they had to get away from the blast
zone.

“Rolling left,” came Jacobs’s response after only a second’s hesitation.

Robb just had to hope that he could ride out the shock wave and find someplace to land. They had passed over the Palmyra Atoll
only ten minutes before, but the runway built during World War II had been abandoned decades earlier. Christmas Island, five
hundred miles away, had the closest operational runway. Despite all the damage the plane had sustained, it was still flying.
They might make it.

“Come on, you bastard!” Robb grunted as he strained at the controls.

The nose of the enormous plane came around slowly. Too slowly.

The blast wave from the explosion caught up with them and slapped at the plane from behind, heaving its tail up. A colossal
crack of thunder hammered the aircraft. The windows shattered and wind howled through the cockpit. The number one engine was
wrenched from its mounts, shearing half the port wing from the plane and setting the fuel tanks aflame. The plane plummeted
like an elevator cut from its cable.

With two engines gone and another shut down, the
airliner was mortally wounded. Thinking of the 373 men, women, and children in the plane—people who were his responsibility—Robb
didn’t give up, but he had no more hope of flying it than one of the passengers. He battled the controls trying to level the
plane, but it was a dead stick. Despite his efforts, the plane spun downward in a death spiral. By the time the airliner plunged
through the lowest cloud layer, the altimeter read one thousand feet. For the first time in an hour, Robb could see the blue
water of the Pacific.

Realizing that their fate was inevitable, Robb let go of the yoke and sat back. He held out his hand to Jacobs, who grasped
it tightly with her own. Never much for religion, Robb nonetheless closed his eyes and found himself reciting the Lord’s Prayer.
He was up to the words “Thy kingdom come” when the plane slammed into the ocean at over five hundred miles per hour.

Blood and Snow 5: Prey and Magic by Rashelle Workman
Colmillos Plateados by Carl Bowen
The Stranger's Magic: The Labyrinths of Echo: Book Three by Max Frei
Heart of the Kraken (Tales from Darjee) by Exley, A. W.
Of Daughter and Demon by Elias Anderson
Liars and Thieves (A Company of Liars short story) by Karen Maitland
Fool on the Hill by Matt Ruff
Sleeper Of The Wildwood Fugue (Book 7) by Charles E. Yallowitz
Father Night by Eric Van Lustbader
Downton Tabby by Sparkle Abbey
Our partner