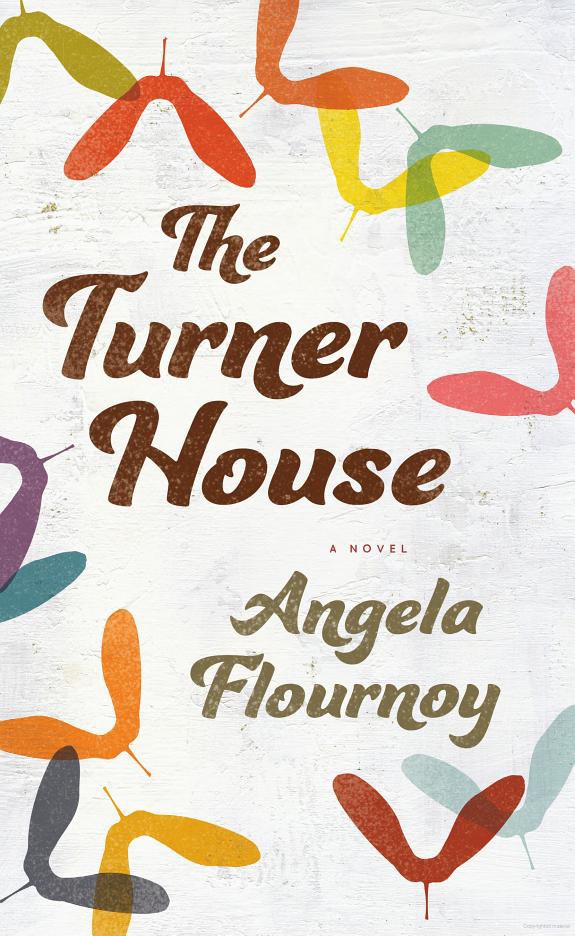 Trouble in the Big Room

It Sure Ain't Free

Far from Any Pulpit

Better Than a Burlap Sack

This Was the Surprise

A Life to Get on With

Sometimes It's Gotta Be You

A Typecast She Couldn't Shake

A Prudent Wife Is from the Lord

Brave, or at Least Brash

One Thing Was Clear

Where Turners Had Been Known

The First and the Last

When the End Is Near

To Let Go or to Hang On

An Old Man in Faded Slacks

A portion of this novel appeared, in different form, in
The Paris Review.

who saw more than I can make up

and loved more than I can imagine 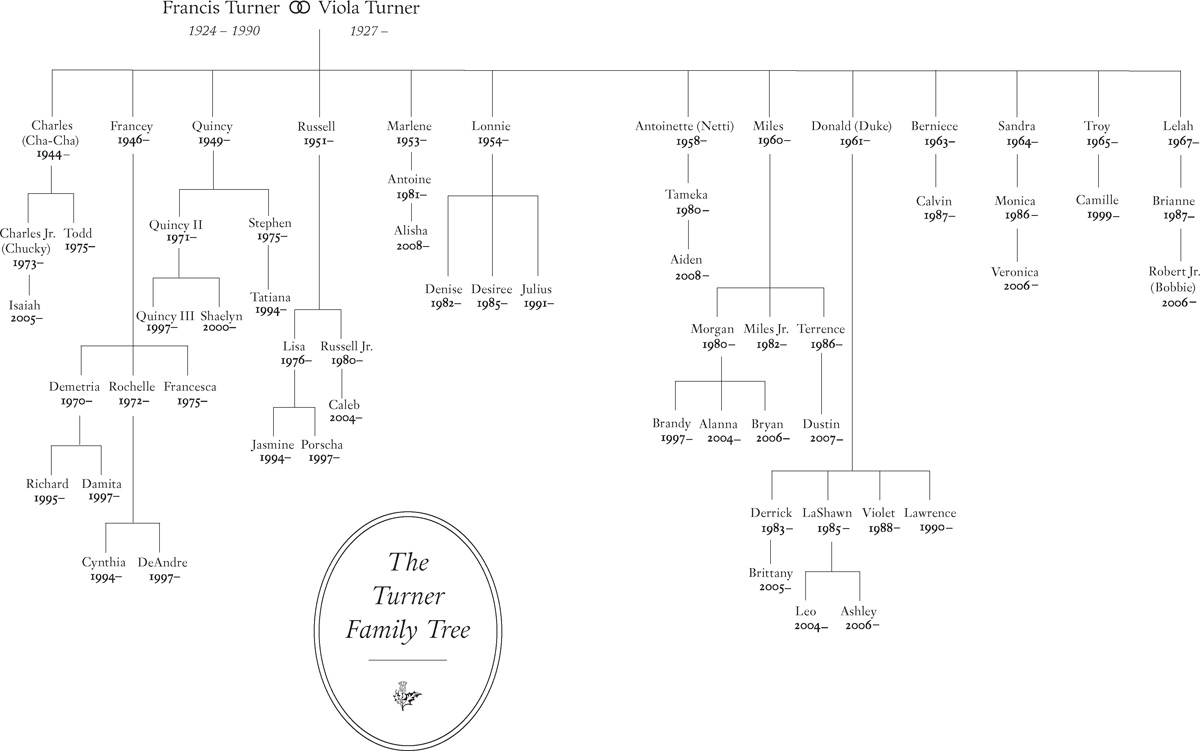 The Negro offers a feather-bed resistance. That is, we let the probe enter, but it never comes out. It gets smothered under a lot of laughter and pleasantries.

Â Â Â Â Out of the gray hills

Of industrial barns, out of rain, out of bus ride,

West Virginia to Kiss My Ass, out of buried aunties,

Out of the bones' need to sharpen and the muscles' to stretch,

âPhilip Levine, “They Feed They Lion”

Trouble in the Big Room

The eldest six of Francis and Viola Turner's thirteen children claimed that the big room of the house on Yarrow Street was haunted for at least one night. A ghostâa haint, if you willâtried to pull Cha-Cha out of the big room's second-story window.

The big room was not, in actuality, very big. Could hardly be considered a room. For some other family it might have made a decent storage closet, or a mother's cramped sewing room. For the Turners it became the only single-occupancy bedroom in their overcrowded house. A rare and coveted space.

In the summer of 1958, Cha-Cha, the eldest child at fourteen years, was in the throes of a gangly-legged, croaky-voiced adolescence. Smelling himself, Viola called it. Tired of sharing a bed with younger brothers who peed and kicked and drooled and blanket-hogged, Cha-Cha woke up one evening, untangled himself from his brothers' errant limbs, and stumbled into the whatnot closet across the hall. He slept on the floor, curled up with his back against dusty boxes, and started a tradition. From then on, when one Turner child got grown and gone, as Francis described it, the next eldest child crossed the threshold into the big room.

The haunting, according to the older children, occurred during the very same summer that the big room became a bedroom. Lonnie, the youngest child then, was the first to witness the haint's attack. He'd just begun visiting the bathroom alone and was headed there when he had the opportunity to save his brother's life.

Three-year-olds are of a tenuous reliability, but to this day Lonnie recalls the form of a pale-hued young man lifting Cha-Cha by his pajama collar out of the bed and toward the narrow window. Back then a majority of the homeowners in that part of Detroit's east side were still white, and the street had no empty lots.

Soon Quincy and Russell spilled into the hallway. They saw Cha-Cha, all elbows and fists, swinging at the haint. It had let go of Cha-Cha's collar and was now on the defensive. Quincy would later insist that the haint emitted a blue, electric-looking light, and each time Cha-Cha's fists connected with its body the entire thing flickered like a faulty lamp.

Seven-year-old Russell fainted. Little Lonnie stood transfixed, a pool of urine at his feet, his eyes open wide. Quincy banged on his parents' locked bedroom door. Viola and Francis Turner were not in the habit of waking up to tend to ordinary child nightmares or bed-wetting kerfuffles.

Francey, the eldest girl at twelve, burst into the crowded hallway just as Cha-Cha was giving the haint his worst. She would later say the haint's skin had a jellyfish-like translucency, and the pupils of its eyes were huge, dark disks.

“He ain't runnin me outta here,” Cha-Cha yelled back.

With the exception of Lonnie, who had been crying, the four Turner children in the hallway fell silent. They'd heard plenty of tales of mischievous haints from their cousins Down Southâthey pushed people into wells, made hanged men dance in midairâso it did not follow that a spirit from the other side would have to spend several minutes fighting off a territorial fourteen-year-old.

Francey possessed an aptitude for levelheadedness in the face of crisis. She decided she'd seen enough of this paranormal beat-down. She marched into Cha-Cha's room, grabbed her brother by his stretched-out collar, and dragged him into the hall. She slammed the big-room door behind them and pulled Cha-Cha to the floor. They landed in Lonnie's piss.

“That haint tried to run me outta the room,” Cha-Cha said. He wore the indignant lookâeyebrows raised, lips partedâof someone who has suffered an unbearable affront.

“There ain't no haints in Detroit,” Francis Turner said. His children jerked at the sound of his voice. That was how he existed in their lives: suddenly there, on his own time, his quiet authority augmenting the air in a room. He stepped over their skinny brown legs and opened the big room's door.

The window was open, and the beige sheets from Cha-Cha's bed hung over the sill.

“Look under the bed.”

“Put them sheets back where they belong.”

Cha-Cha obliged. He felt his father's eyes on him as he worked. When he finished, he sat down on the bed, unprompted, and rubbed his neck. Francis Turner sat next to him.

“Ain't no haints in Detroit, son.” He did not look at Cha-Cha.

“It tried to run me outta the room.”

“I don't know what all happened, but it wasn't that.”

Cha-Cha opened his mouth, then closed it.

“If you ain't grown enough to sleep by yourself, I suggest you move on back across the hall.”

Francis Turner stood up to go, faced his son. He reached for Cha-Cha's collar, pulled it open, and put his index finger to the line of irritated skin below the Adam's apple. For a moment Cha-Cha saw the specter of true panic in his father's eyes, then Francis's face settled into an ambivalent frown.

In the hallway the other children stood lined up against the wall. Marlene, child number five and a bit sickly, had finally come out of the girls' room.

“Francey and Quincy, clean up Lonnie's mess, and all y'all best go to sleep. I don't wanna hear nobody talkin bout they tired come morning.”

The mess was cleaned up, but no one, not even little Lonnie, slept in the right bed that night. How could they, with the window curtains puffing out and sucking in like gauzy lungs in the breeze? The children crowded into Cha-Cha's roomâa privileged first visit for most of themâand retold versions of the night's events. There were many disagreements about the haint's appearance, and whether it had said anything during the tussle with Cha-Cha. Quincy claimed the thing had winked at him as he stood in the hallway, which meant that the big room should be his. Francey said that haints didn't have eyelids, so it couldn't have winked at all. Marlene insisted that she'd been in the hall with the rest of them throughout the ordeal, but everyone teased her for showing up late for the show.

In the end the only thing agreed upon was that the haint was real, and that living with it was the price one had to pay for having the big room. Everyone, Cha-Cha included, thought the worry was worth it.

Like hand-me-down clothes, the legacy of the haint faded as the years went by. For a few years the haint's appearance and Cha-Cha's triumph over it remained an indisputable, evergreen truth. It didn't matter that no subsequent resident of the big room had a night to rival Cha-Cha's. None of them ever admitted to hearing so much as a tap on the window during their times there. The original event was so remarkable that it did not require repetition. Cha-Cha took on an elevated status among the first six children; he had landed a punch on a haint and was somehow still breathing. But with each additional child who came along the story lost some of its luster. By the time it reached Lelah, the thirteenth and final Turner child, Francis Turner's five-word rebuttal, “Ain't no haints in Detroit,” was more famous within the family than the story behind it. It first gained a place in the Turner lexicon as a way to refute a claim, especially one that very well might be trueâa signal of the speaker's refusal to discuss the matter further. The first six, confident that Francis Turner secretly believed in the haint's existence, popularized this usage. By Lelah's youth, the phrase had mutated into an accusation of leg pulling:

“Daddy said if I get an A in Mrs. Paulson's, he'd let me come on his truckin trip to Oregon.”

Cha-Cha transported Chryslers throughout the Rust Belt on an eighteen-wheeler. The job was the closest thing to an inheritance that he received from his father. After his twenty-fifth birthday the old man took him to his truck yard, introduced him to the union boss, and ushered him into the world of eighteen-wheelers, all-nighters to Saint Louis, and the constant, cloying smell of diesel fuel. Cha-Cha joked with his brothers who'd joined the service that he was more decorated at Chrysler than all of them combined. This wasn't a warmly received joke, but it was true. He held records in the company for fewest accidents, best turnaround times, cleanest cab, leadership, and dependability. He did this for over three decades, until, if what he saw was really what he thought he saw, the haint tried to kill him.