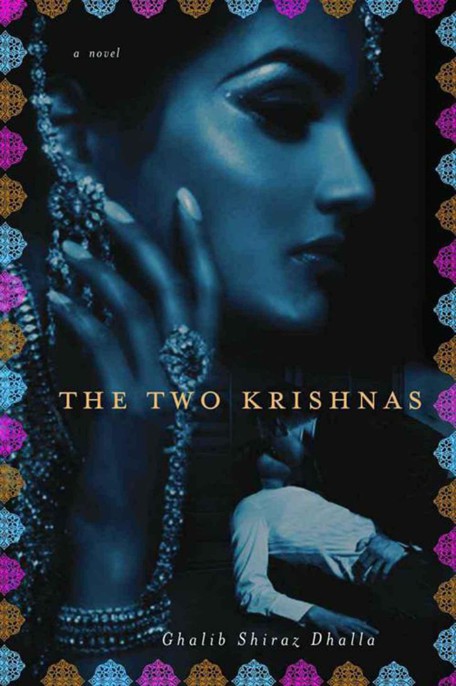 Advance praise for
The Two Krishnas

“Shiraz Dhalla immerses us in his gripping narrative as he delves into the nooks and crannies of human desire and explores both its splendor and the havoc it can wreak. A formidably intelligent and adept writer, he has stretched my understanding of a world I know very little about with this touching and masterfully written novel.”

“Ghalib Shiraz Dhalla writes with a voice that is both agile and compassionate. He renders scenes of great emotion with equal parts passion and precision. At it’s core,
The Two Krishnas
is a classic tale of tragic, forbidden love, but Dhalla infuses it with an astute discussion of Hindu culture that should appeal to a broad cross-section of readers.

“
The Two Krishnas
is a powerful, sure footed novel of love, longing and loss that richly portrays life like no other work of fiction I’ve read. With his complex cast of characters and poetically drawn landscapes, Dhalla’s talent shines and he shows us he’s wise beyond his years.”

Praise for
Ode to Lata

“An achievement. Dhalla traces the history of a life over three continents, through three generations of a family, exploring multiple facets of human sexuality in the process. This story resonates for any and all of us. This is a book of healing, of a soul coming to terms with itself and a body and mind it inhabits. Intense.”

“A devilish indulgence…this author gets kudos for creating Ali, a chatty, outrageously embittered protagonist. The references to Kenyan mosque culture are enlightening (the glossary in back is interesting in its own right) and several auxiliary characters stand out.”

“Much more than a ‘coming out’ story, this is a brilliant study of culture, religion, body image, racism, sex, and friendship that cuts to the soul. Dhalla’s first novel will touch anyone who has felt out of place, unattractive, and unloved. Highly recommended.”

“Dhalla turns gay life from cliché to reality as few other novelists have as he tells Ali’s story in a racy, edgy manner that is delicious to read.”

“Poignant. Dhalla has found his voice and given one to an entire community”

“Dhalla unapologetically rips the cobwebs out of L.A.’s closet and spins them into an engrossing silk tapestry of life and love.”

“Talk about multiculturalism, this book has it. Last year’s Nobel Prize for literature was won by V.S. Naipaul. In Ghalib Dhalla we just may have the gay V. S. Naipaul.”

“Raw and edgy. Ghalib Dhalla’s first novel leaves the reader hungering for more with his witty and poetic storytelling. Hauntingly engaging, he pulls you into Ali’s world of love and lust, driven by a fierce yet heartfelt quest for inner truth.”

“At long last, a suitable boy! This wonderful novel is about Indian writing coming out of the closet. It is also about being a new American under artificial moonlight. It has Melrose Place in it, but also Meena Kumari. A tender, teasing reminder that before there was Hollywood, God made Bollywood, Amen! Dhalla makes a tasty dish, with chutney on the side.”

“Just in case there was any doubt, Ghalib Shiraz Dhalla proves once and for all that West Hollywood just ain’t no place for sissies. Yes,
Ode to Lata
delivers, reassuringly, all the usual glittering clichés — the boys, the bodies, the bars—and those moments will have you squealing in recognition and delight. But soon Dhalla leads you into far more dangerous territory. What is really going on with that group of friends you like to call “family?” Why does the thought of your mother’s visit fill you with such shame and longing? How much of your soul are you willing to give up on those Saturday night sex odysseys? These and other disturbing questions will haunt you long after you have finished this dazzling, unforgettable novel.”

“Out of the Indo-African Diaspora comes this searingly frank novel that breaks new ground in its portrayal of a coming out journey spanning Kenya and Los Angeles. Dhalla’s writing vividly evokes the losses and also the pleasures of migration, and the oscillation between throbbing desire and aching melancholia as memory and fantasy seduce each other between the sheets and on the dance floor.”

An Imprint of Riverdale Avenue Books

For the Virjees –
Mama Kuba, Jomba, Gulshan and Bapa

And Karsh Kale, whose music is the heartbeat of my words

“O Dhananjaya (conqueror), I bless you, my dear friend. There is none equal to you in the three worlds, as you know my secret. O Arjuna, you will curse me if you talk to anyone about the secret which you wanted to know and have experienced.”

“The one and only wife should with internalized belief and total absorption, hold her husband as a God.”

DESIRE IS INCAPABLE of hypocrisy. The thought broke through Rahul Kapoor’s mind as he prepared to tell his first lie of the day. Sitting at his desk, Rahul stared at the framed picture of his wife and son, their laughter trapped beneath glass. His finger ran over the surface and he touched them, almost feeling the planes and curves of Pooja’s beautiful face, the softness of her pink chiffon sari, Ajay’s weathered leather jacket.

We can force ourselves to tolerate certain people, to acclimate to a job we detest, and for a while, even rein ourselves in with logic and common sense, he thought. But we are truly helpless against the heart and its obdurate desires.

Rahul’s finger trailed off the pane of glass, leaving behind an oily smudge. He looked at his watch. It was three-thirty in the afternoon. If he left now, he could beat the evening traffic. He stood up and absentmindedly packed his leather briefcase, threw on a navy blue suit jacket and called his assistant Amelia, sitting on the other side of the busy bank office, surrounded by her coterie of little stuffed toys.

He made his excuses about visiting important clients, about being unable to make it back in time due to traffic and she, in her typical, obsequious manner, assured him that everything was under control. Los Angeles, after all, was not kind to wayfarers or commuters.

Clutching his briefcase, Rahul left his corner glass office and cut across the lobby to pick up a few sales brochures for effect. A queue of impatient clients paying credit card and mortgage bills, making deposits, or just withdrawing money because they were untrusting of the ATM machine looked at him expectantly. He ignored them. He was a man in love, removed from the mundane. Rahul said his perfunctory goodbyes to a few employees, one of them too busy to notice, and made for the door like a convict for whom the prison gates had miraculously opened in the middle of the night.

As his Mercedes sped down the 405 Freeway, the lane markers morphing into a solid line, Rahul thought about how naïve he had been in thinking he could wrestle with his urges, simply vaporize them. In the end, years of deprivation had only served to nurture them.

Before long, Rahul approached an army of red lights, and a wave of sickness washed over him. The solid white line broke down into halting dashes again. He came to a complete stop, felt the acid drip in his stomach. Walled behind a massive white truck, there was no telling what lay ahead. He was going to be late.

Rahul was not a cruel man. His disbelief in a higher power—in karmic retribution—did not make him apathetic to the pain of others. But entrenched in the heat of traffic, Rahul couldn’t help wishing that someone else also suffered. For this to cost him another second of delay there had better be damage, significant devastation, a bonfire of metal and flesh, not just some calm CHP officer completing a speeding ticket and throwing already paranoid drivers into apoplexy.

The heat surged. The digital temperature display on his dashboard reached the nineties and the gasoline indicator lit up. He restrained himself from cranking up the air-conditioner. He loosened the noose—a deep burgundy silk tie, clustered with wisps of turquoise paisleys that his wife had given him some years ago to celebrate a raise—and let it hang limply around his wet neck, granting him permission to unbutton the starched cotton shirt. His son thought the tie unfashionably ornate and Rahul often joked that one day he would pass it on to him as an heirloom.

The remnants of his Jaipur aftershave mingled with his sweat and produced the kind of pheromonal aroma that he knew would elicit excitement when he finally got there. The thought of it made him sweat even more. He rolled down the window and warm air barged in with the cacophony of traffic. Rahul’s eyes glazed behind his sunglasses, as they often did when the world around became too harsh and the visual had to be blurred momentarily: a kind of expeditious meditation. Then Rahul could hear the deep, throaty laughter, feel the gnawing of teeth on his stubbly chin, see bare limbs and torsos undulating in pure white sheets. And for some inexplicable reason he heard the faint crackling of electrical wires overhead.

He reached out for the telephone headset but the cord was tangled on the parking brake. His frustrated tugs only strengthened its hold.
Calm down, calm down
, he urged himself.
You’re making matters worse
. He uncoiled the cord gently, reminding himself to breathe evenly. An elongated press of “9” on his cell phone transported him to his destination.
If only I could fly over all this. Leap over it all and be there with you.
The answering machine came on, and then that voice filled his ear and made his heart jump. Rahul knew that preparations were being made—tuberoses being placed to crane out of vases to perfume the air; pungent powders in shades of earth and vermillion were being portioned out into bubbling pots of food; music being selected to set the mood, to score the soft moans of pleasure and grateful cries of release; and a volume of Rumi was being placed on the nightstand to celebrate the afterglow.