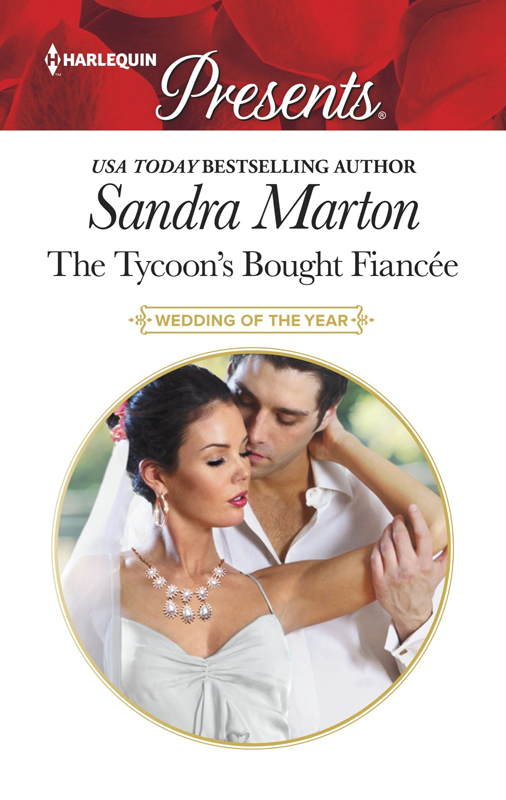 When Stephanie Willingham and David Chambers meet at a wedding, enough sparks fly to start an inferno! But it's not just their chemistry that draws them togetherâ¦ Stephanie needs money to pay down her family's debts and David needs a fiancÃ©eâfast! So they strike a dangerous bargainâ¦

Before they know it, they have a full scale blaze on their hands: for their cool engagement of convenience is anything but! As the passion rages between them, can they make it to the altar for real?

Book three in The Wedding of the Year trilogy

Originally published in 1998 as
The Groom Said Maybe!

May the next 25 years be as much fun!
Â
Love, as always,
Â
Carole Mortimer
Dear Reader,
Â
I have a confession to make: I love weddings! Fancy ones, simple onesâit doesn't matter. I end up happily sniffling into a tissue each time. What could be more fun, I thought, than writing about a wedding? Writing about
three
weddings, that's what! Welcome to the sexy, funny, tender and exciting tales of three brides and three grooms who all meet atâthat's rightâa wedding! Three books, three couplesâ¦three terrific stories. Here's the thirdâand the last. You'll enjoy it, even if you haven't read
The Bride Said Never!
and
The Divorcee Said Yes!
âthough I hope you have!
Â
Stephanie Willingham is thirty-five, stunning and a widow. David Chambers is divorced. He's an attorney and a rancher, as handsome and rugged as the Arizona hills he calls home. Each has enough memories of just how bad marriage can be to last them a lifetime. Theirs will be an engagement of convenienceâ¦ or so they think, until the sparks begin to fly in
The Groom Said Maybe!
Â
Settle back, open up a box of chocolates and enjoy. If you want to drop me a line, I'd love to hear from you. Write to me at: P.O. Box 295, Storrs, Connecticut 06268, or E-mail me via
[email protected]
Â
With my warmest regards,
Â

Stephanie Willingham stood at the marble-topped vanity table in the country club ladies' room and stared at her reflection in the mirror.

Inferno of Darkness (Order of the Blade #8) by Stephanie Rowe
Blowing Up Russia by Alexander Litvinenko
The Orb of Wrath (The Merchant's Destiny Book 1) by Nic Weissman
True Crime by Andrew Klavan
When the Dead Rise (Book 1): The Beginning by Fick, C.M.
Heads You Lose by Lisa Lutz
The Nanny Arrangement by Lily George
Amorous (The Lincoln Series Book 1) by Baer, Susan
The Unscrupulous Uncle by Allison Lane
Bear The Burn (Firebear Brides 1) by Anya Nowlan
Our partner