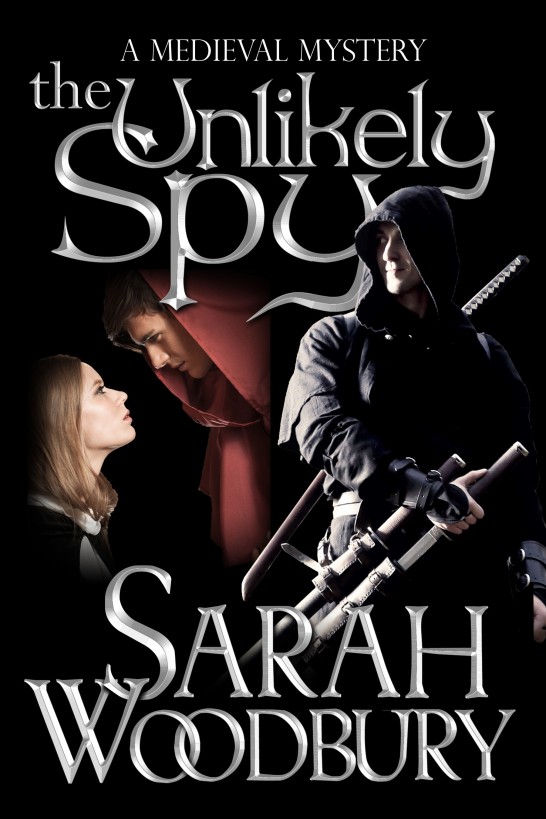 August 1146
. Prince Hywel has called
all the bards of Wales to him for a music festival to mark the
third anniversary of his rule over Ceredigion. He has invited all
the lords of Wales too, including his father, his uncle, and his
neighbor to the south, King Cadell. But with the highborn also come
the low: thieves, spies, and other hangers-on. And when a murderer
strikes as the festival starts, Gareth and Gwen are charged with
discovering his identity—before the death of a peasant shakes the
throne of a king.

The Unlikely Spy
is the fifth
Gareth and Gwen Medieval Mystery
.

My partner in crime for more than thirty
years

The Gareth and Gwen Medieval Mysteries:

Footsteps in Time (Book One)

The Lion of Wales Series:

Of Men and Dragons

Gwalchmai
– GWALCH-my (‘ai’ makes a long i sound like in
‘kite; the ‘ch’ like in the Scottish ‘loch’)

Ieuan
– ieu sounds like the cheer, ‘yay’ so, YAY-an

Pedr – Prior of St. Padarn’s monastery

G
wen peered into
the courtyard of the monastery before venturing across the hot
cobbles into the mid-afternoon sun, which shone out of a rare deep
blue sky. Heat radiated off the stones, and Gwen moved towards the
garden, seeking the breeze coming off the brook. She’d swept up her
brown hair into a chignon, but sweat clung to the tendrils at the
back of her neck.

The guesthouse lay to one side of the large
square, which was fronted on the road by a gatehouse and a long
stone wall. The monks’ quarters, church, and college of priests
were opposite, as far from the guesthouse as possible while still
remaining in the same compound. Given her hour-long struggle to get
her daughter to go to sleep, Gwen had to admit the genius of that
decision.

In point of fact, that distance was not
because the monks feared to hear a crying child but was left over
from when Norman monks, who viewed women and children with a
certain degree of hostility, had occupied the monastery. Now that
Hywel ruled Ceredigion, the monastery had been restored to the
native Welsh Church. Still, the presence of young women and
children in the guest quarters made some of the older monks
uncomfortable, and Gwen had been trying as best she could to keep
Tangwen quiet and out of the way. She’d failed utterly at both
today.

For the moment, however, Tangwen was asleep,
and Gwen’s fourteen-year-old maid, extravagantly named Elspeth,
remained with her. Gwen hoped her daughter would sleep for at least
two hours. To say Tangwen was overtired after all the activity of
the last few days was an understatement.

Unfortunately for the monks’ peace of mind,
Gwen’s adorable baby girl was the least of the monks’ problems this
week. Travelers filled the guesthouse, with more coming every hour.
At Prince Hywel’s request, the abbot had agreed to suffer through
the presence of whatever women came to stay with them, regardless
of their seductive beauty.

And it wasn’t just the guest quarters at the
monastery that were filling up. Aberystwyth castle, the villages of
Aberystwyth and Llanbadarn Fawr, and the entire surrounding area
were full to bursting with travelers who had arrived at Prince
Hywel’s invitation. He’d put out a call to every corner of Wales
for bards to travel to Ceredigion for a music festival with him as
the host. Even King Owain—along with Gwen’s father, Meilyr, and
brother, Gwalchmai—were journeying from Aber for the
celebration.

Gwen (and Prince Hywel too) had hoped they
would have arrived already, since the festival had opened that
morning. Given the distances involved and the number of people
traveling, however, it was hard to judge how long any journey would
take. Regardless of when they arrived, they would stay for a week
afterwards, which was some consolation. Gwen had missed her father
and brother in the two months she’d lived in Ceredigion.

As Gwen stood in the shadows of the
guesthouse, a party of riders entered through the monastery gate
and halted on the cobbles. Gwen stood on tiptoe to look past them,
hoping Gareth might be among the stragglers. He wasn’t, and Gwen
sighed in disappointment. Then a frazzled stable boy ran to hold
the bridle of the lead horse, and the hosteler, a fat, balding monk
in charge of the wellbeing of guests, waddled out of the chapter
house to greet them.

Although Gareth had not come, Gwen smiled
when she recognized Prior Rhys riding in at the tail end of the
group. His soldierly bearing was unmistakable even underneath his
bulky monk’s robe. He wasn’t in Aberystwyth for the festival but
had come because his abbot had sent him to St. Padarn’s to consult
with the members of the college of priests on a spiritual matter.
Gwen hadn’t seen him since the evening meal the night before, and
at the sight of him, she lifted her hand and finally stepped into
the hot sun so she could greet him.

But instead of allowing her to come to him,
Prior Rhys dismounted and ran to her, hitching up his robe to
reveal the breeches and boots he wore underneath. Just looking at
the weight of his clothing made Gwen feel hotter. In addition, his
behavior was unusual enough to turn her expression from a smile of
greeting to a frown of concern.

“Where might I find your husband?” Rhys said
when he reached her. He was of the same generation as Gwen’s
father, but unlike Meilyr, Rhys’s age was revealed not in a
burgeoning paunch but in the lines on his face, evidence of many
years spent outdoors in the wind and sun. At the moment, his bushy
eyebrows had drawn together, making the lines on his forehead more
pronounced than ever.

“He was at the castle last I heard.” Gwen
sidled back to the guesthouse wall so she could stand in the shade.
She also wanted to put a few more feet between Rhys and the new
arrivals, who were shooting curious glances at the prior. She
didn’t want him to be the subject of anyone’s entertainment, and,
had they known him at all, they would have realized that something
was very much wrong for him to behave with anything less than
absolute dignity.

“I already checked. Both he and the prince
were absent. I had hoped to find them here.”

Gwen shook her head. “I haven’t seen Gareth
since this morning. What’s wrong?”

“Do you have someone to keep an eye on
Tangwen?” Rhys said.

“Elspeth is sitting with—”

“Good. You must come with me.” Rhys took
Gwen’s elbow and urged her across the cobbles to his horse without
waiting for her to finish her sentence. He paid no attention at all
to the guests, who were now openly staring as they passed. Hoisting
himself into his saddle, he held out his elbow for Gwen so she
could mount behind him.

She didn’t question him, merely took his
proffered arm.

The hosteler, however, gazed up at both of
them, open-mouthed. “Whatever is the matter? Where are you taking
Lady Gwen? What should I tell the abbot?”

Rhys made an exasperated sound at the back
of his throat. Glancing at the guests, none of whom were making any
pretense of minding any doings but his, he leaned down to speak to
the hosteler, lowering his voice so nobody else could hear. “The
body of a man has been found in the millpond.”

The hosteler stepped back, shocked and
sputtering. “But—but—”

“Just tell him,” Prior Rhys said.

Then, as Gwen clutched Rhys around the
waist, the prior turned the horse toward the exit. Once underneath
the gatehouse, however, Gwen said, “May I please have a
moment?”

Rhys stopped to allow Gwen to lean down to
the gatekeeper, who had come out of his small room next to the gate
in response to all the commotion. He was an aged man with white
hair and hunched shoulders. “Sion, would you tell my husband or
Prince Hywel if he arrives that I have left with Prior Rhys on an
urgent matter?”

Gwen glanced at Rhys, who spoke for her.
“The millpond.” The millpond had been carved out of the north bank
of the Rheidol River, southeast of the monastery. Everyone in the
region brought their grain there to grind, though it was most often
used by the castle and the monastery, since they had the most land
planted in grain.

“Of course, Prior Rhys,” Sion said. Gwen
didn’t know that the gatekeeper could actually see the prior at
that distance, but Rhys had a distinctive gravelly voice that Sion
would have recognized. “Go with God’s blessing.”

A New Day by Beryl Matthews
The President's Call: Executive Leadership From FDR to George Bush by Judith E. Michaels
Damned and Desperate by Tara West
ControlledBurn by Em Petrova
Help! My Brother's a Zombie! by Annie Graves
By Blood by Ullman, Ellen
Halfling (Black Petals Book 1) by Tarisa Marie
Bayou Betrayal by Robin Caroll
Queen of the North (Book 3) (Songs of the Scorpion) by James A. West
The Bomber Dog by Megan Rix
Our partner