The Uprising (The Mamluks Saga: Episode 2) 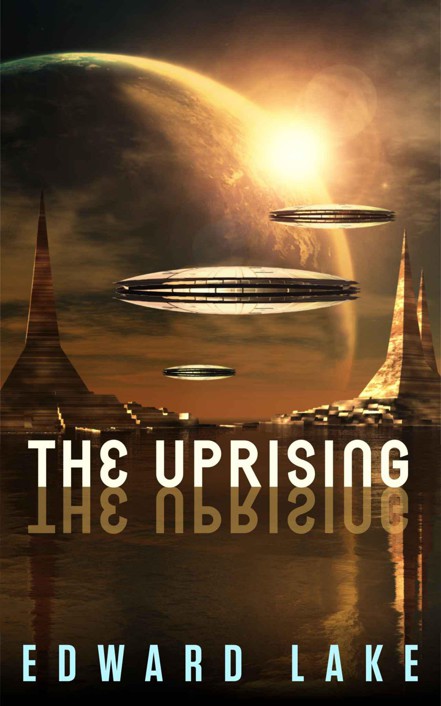 A
ll rights reserved. No part of this book shall be reproduced or transmitted in any form without prior written permission of the publisher.

This book is a work of fiction. Names, characters, places, and incidents are either the product of the author’s imagination or are used fictitiously. Any resemblance to actual events or locales or persons, living or dead, is entirely coincidental.

Please be advised: This book is part of a series. It is highly suggested that you read episode 1 before reading episode 2.

T
he words of the slave who sang, ‘A Change Is Gonna Come’ were stuck in my head as I ran through the forest.
“My Lord, I guess our history dies with us.”
Since hearing that wonderful, uplifting song, and those gripping words about a forgotten past, an old memory had resurfaced in my mind.

The memory was of the night I asked my mother, Emily, about her mother. We were playing around in my room, and she began to tickle me. As a child, I loved Mother’s tickles. Her tickles always made me smile and laugh, and sometimes, I laughed so hard I cried.

When I asked Mother what her mother’s name was, I was expecting to hear a story about a great woman. Instead, Mother ignored the question and hurried out of my room like she was hiding something from me. I sat there all night, wondering why.

Could Mother be a part of the forgotten history the slave spoke of?
Up until now, I had always believed that Mother had been born long after the conquest of Earth. At least that’s what I had been taught during my time at the Soldiers Academy.

Still, even though I was deeply troubled, I had to stay focused on the task at hand. My fight with Adomas was only a few days away, and I was ready to fulfill my destiny.
A new Champion will rise.

A group of hovercrafts followed me from above, spraying water over the forest as I sprinted past the scenic trees and plants. I had been running since the early morning, strengthening my endurance, preparing for the fight. After such a long run, it was a delight to be under the cool, drizzling water.

When I finally got back to my building, I stopped at the garden on the far side and jogged in place. I was in phenomenal shape, and I felt like I could run forever. I turned around to go back into the forest for another run, but before I could take off, I heard someone call to me from the balcony that overlooked the garden. I spun around and saw my mother, looking down on me with a warm smile.

I smiled back and walked closer. “Excellent, Mother. I’m ready for the fight.”

She leaned back and crossed her arms. “Well, it’s still a few days away. Don’t exert all your energy now.”

I firmly shook my head. “No. I feel invincible. Nothing can stop me.”

Mother let out a slight chuckle. “Then at least take a break to spend some time with the rest of us. I’ve hardly seen you since the fight was announced.”

I grinned and shrugged. “I suppose I can stop for a moment.”

Mother waved me on. “Come on up, Dear. I’ll have Audrey get us something to drink.”

I jogged inside and hiked to the balcony. Audrey was just getting there when I arrived. She came forward and handed me a chilled drink as I sat down.

“Than—’’ I stopped myself and set the drink down on the small, sandstone table between the chairs.

Mother caught me and flashed a tense smile. I looked away in embarrassment, upset with myself. We stayed quiet as Audrey placed Mother’s drink on the table. Then, when Audrey left, I looked back at Mother and saw her staring at me.

“Yes. And I’m so excited I can’t wait. I’ve trained my whole life for this. At last, the time has come.”

Mother nodded and waited a moment before continuing. “You know, Juozas. No one has ever defeated the Champion without the strength of
ozlon
.”

She smiled. “To be honest, I’ve been really excited, too.” She lifted her cup and held it out to me. “To us—may we enjoy a glorious reign.”

I watched Mother with a curious stare and carefully copied her. This was the first time she had ever done such a gesture. To finish, she struck her cup against mine and said, “Cheers.”

A
fter my drink with Juozas, I headed to the security room to check on Adomas. When I got there, I found him standing at the center of the room—holding his hands behind his back— staring at the holographic monitors. It was like he knew the end was coming, and he wanted to look over the security room one last time.

I walked in and stood beside him. Even after being with him for so long, I was still amazed at the sheer size of our Champion. All the Mamluks were big, but Adomas was something special. His arms were incredibly long, reaching a few inches past his knees, and his muscles looked like they were carved out of stone. His daring, bold blue eyes were always a pleasure to stare at, too. And in the bedroom, his thick, full lips could make me climax like no human man ever could.

He glanced at me with a smile. “Emily.”

“Hello, Adomas.” I quickly checked the monitors.  “How is everything?”

Lately, I had noticed a change in him.  The sexy coldness about him that I had grown to love had been replaced with a passive shroud.
Maybe the upcoming fight with Juozas was having an effect on him?

In the past, Adomas had always regarded the inevitable battle against his spawn as ‘only the next fight.’ Now, I doubted such a claim. Even so, I knew he would give it everything he had left to win.

“How are
you
feeling, Love?”

He smiled anxiously and gradually turned away. “I am prepared for the next challenger. The fight is all that remains.” Then he left the room.

O
n my second run, I came across a field of working slaves. They were spread out for a few miles, digging holes in the ground with shovels, and chopping at the soil with other tools. The sun was shining a bit brighter now, and the increased heat was making me sweat like crazy.

Near the end of the field, I spotted one of my closest friends. Eager to talk, I stopped my run and jogged over to him. “London!”

He turned and flashed an ecstatic smile. “Juozas!”

We turned to check the slaves.

London chuckled. “These bloody animals are pathetic. It takes them half the day to dig one hole. We’ve been stuck in this same spot since morning.” He had the same accent as his mother, Bridget. It sounded very proper and punctual. I had always wondered where it came from.

I nodded sadly, glancing at the slaves. They looked exhausted and most of them were moving sorely. “Well, hopefully they’ll pick up the pace.”

London shrugged and laughed. “It’s no matter, really. They’ve only got the rest of their miserable lives to finish the job.”

I grinned nervously and looked away. “That is true.” Then I looked back at him. “So
,
do you have any plans after your duties are complete for the day?”

“Yes, in fact. I’m going to The Saulius Lounge this evening with Lauren-Lynn. You should join us, Old Friend. We haven’t seen you much since your fight with Adomas was announced.”

“I’ve just been training nonstop. This is my chance to fulfill my destiny and become Champion.”

London gave me a fiery look. “You’ve already won, Juozas. Adomas is too old. He nearly lost the last fight—and the one before that.”

“They’ve called Father old for a long time. And he’s
still
the Champion. I could never underestimate him.”

“Well, you should still come to the lounge. Lauren-Lynn wonders about you constantly. She would be grateful to see you there.”

I smiled as I thought about Lauren-Lynn. I did miss seeing her, and I figured one night of fun wouldn’t disrupt my training. “All right. I’ll go.”

London tapped me on the arm. “That’s the spirit. Meet us there when the sun sets. We’ll be inside somewhere. I would tell you to call but you have no
sija
.”

“When are you going to stabilize your
ozlon
? It’s been far too long.”

I shrugged. “I don’t know. Perhaps there is still a lot of uncertainty inside me.”

“Seems that way. But if you are to become the Champion, you had better resolve that issue soon.”

I reached out and tapped his shoulder. “Of course, Old Friend. I’ll see you at the lounge.” I jogged ahead and looked around as I passed the sea of slaves. I saw a clear lane that led to a mountain. I figured climbing to the top and then running back home would be enough training for the day. Finally, I exhaled deeply and took off at my normal speed.

T
he Saulius Lounge was one of the most popular recreation sites in our reign. It was owned and operated by a Mamluk named Saulius. He was a festive citizen, and very popular in our society.

The lounge was a tall, long building, filled with dance rooms echoing with the sound of drums, and lounge rooms with local singers. There were also plenty of servants on site to provide refreshments.

When I arrived at sunset, the area was rather full. I parked my ship by the rows of ships lined up on the open landscape nearby. As I left the ship and walked to the building, I bobbed my head and listened to the insistent uproar coming from inside.

Just as I entered, I heard someone shout greetings from above. “Welcome, Juozas!”

I looked up and waved at the stranger, then I swayed to the back entrance and nudged my way through the crowd. Like most nights, there was a good mix of soldiers and citizens. I headed to the second floor and checked one of the dance rooms.

The drummers were playing one of my favorite sets. I danced to the beat as I looked around for London and Lauren-Lynn.

A beautiful citizen spotted me and waved me over. She was dancing with a group of friends. “Come in and join us, Juozas!”

I shook my head, smiling. “Not now. But maybe later.”

Right then, I felt someone tapping my shoulder from behind. I turned my head and saw London.

He waved me into the hall. “Come on, we’re over here.”

We squeezed through the crowd and went down the hall to another room. There was a group of vocalists inside, singing
danuo
.

Danuo
is an animated tune with humming and simple phrases. The band was doing a great job with it, setting a nice atmosphere in the room.

London and I walked over to Lauren-Lynn and a group of soldiers I didn’t recognize. They were sitting on a row of sandstone chairs that were built into the floor.

The Dream Life of Balso Snell by Nathanael West
SOMEONE DIFFERENT by Kate Hanney
The Way You Are by Carly Fall
Cake by Nicole Reed
Special Forces Savior by Janie Crouch
Barely Alive by Paulson, Bonnie R.
Motor City Burning by Bill Morris
Pleasant Vices by Judy Astley
Strike 2: Dawn of the Daybreaker by Charlie Wood
The White Guard by Mikhail Bulgakov
Our partner