Read The US Capital Commotion Online

The US Capital Commotion 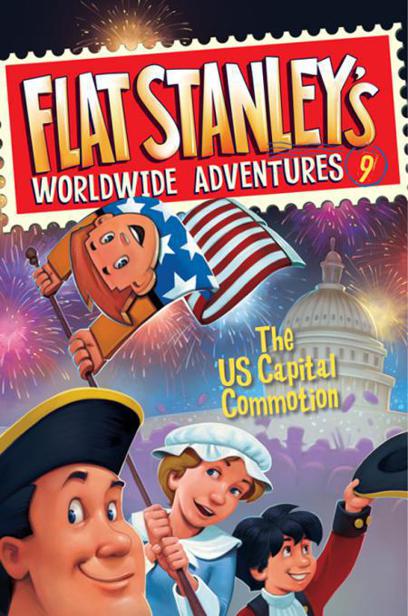 The US Capital Commotion

AND DON’T MISS ANY OF THESE OUTRAGEOUS STORIES:

Stanley and the Magic Lamp

The US Capital
Commotion

What You Need to Know Before Your Own Adventure in the Capital!

Every Fourth of July, Stanley Lambchop dreamed of being in the local Independence Day parade—that is, until the year that his bulletin board fell on him in the middle of the night and flattened him.

“Can’t I be Abraham Lincoln?” Stanley pleaded. Moments before the parade was about to begin, he found himself sitting in the center of the Grammar Society float, with his legs folded tightly to his chest.

“I cannot tell a lie,” intoned his father, George Lambchop. He towered over Stanley majestically in a white wig and ponytail. “I think you look patriotic.”

“Oh, George,” blushed Stanley’s mother, Harriet Lambchop, who was wearing an old-fashioned blue gown and a ribbon in her hair. “You are such a good father … of our country. George Washington!”

Stanley’s father winked. “No, Betsy Ross. It is you who deserves our gratitude for giving birth to such a fine flag.” He gestured grandly down toward Stanley, and Mrs. Lambchop curtsied with a giggle.

“How many times do I have to tell you,” interrupted Stanley, “I don’t want to be the—”

His younger brother, Arthur, appeared from the other side of the float. Arthur had stretched a pale bathing cap over his head and had fringed it with strands from an old gray mop. “It’s not too late to be my kite, Stanley!” He peered down at Stanley from over his tiny spectacles and patted his huge belly, which was actually a pillow stuffed under his shirt.

“I beg your pardon, Mr. Benjamin Franklin,” their father said, shaking his head gravely. “I cannot allow your brother to be struck by lightning.”

“Aw,” said Arthur. “Even if it means discovering electricity?”

Suddenly, a nearby brass band launched into a bouncy rendition of “America the Beautiful.” The float lurched forward.

“The parade is starting!” squealed Stanley’s mother. She picked up a wooden pole and poked it at Stanley. “Stanley, get up! You have to wave!”

“Can’t I just wave with my hands,” Stanley said, “like everyone else?”

“No!” his family shouted.

Stanley let out a sigh, grabbed on to the top of the pole, and slowly unfurled his body.

His mother had spent days sewing his costume. Thirteen red and white stripes ran down to his toes, while a square of blue with white stars covered half of his chest. He began swishing back and forth, as if he were fluttering in the breeze.

“Check out the Stars and Stripes!” someone yelled.

A local television crew ran up and hopped alongside the float. Everywhere Stanley looked, people were pointing their fingers at him.

Being flat had given Stanley the opportunity to do things most people never dreamed of. He had traveled around the world by airmail. He could slide under doors, slip between bars, and fold himself into an origami ninja throwing star. He had served as a cape used by the great matador Carmen del Junco in Mexico and performed with the acrobatic twins known as the Flying Chinese Wonders in Beijing.

But being flat didn’t always make Stanley feel good. Sometimes, he felt as if people paid attention to him not because of who he was, but merely because of how he looked.

The only reason everyone is so excited, thought Stanley as the float rolled on, is that I look weird.

Around him, his father, mother, and brother waved excitedly to the screaming throng of people. Meanwhile, Stanley’s body kept on waving, but he didn’t even feel like he was there.

The next morning, Stanley was examining himself in the mirror that hung on the back of his bedroom door. He turned to the side, and it was as if his body suddenly disappeared. After all, he was only half an inch thick.

“Guess who’s on the front page of the newspaper!” shouted Arthur.

“Thanks for knocking,” Stanley grumbled. He pushed the door, and it swung away from the wall where he’d been abruptly flattened once again.

Sure enough, there was a photograph of the Lambchops atop the parade float—and right in the middle was Stanley, swinging from his mother’s flagpole.
WHAT A COUNTRY
! blared the headline.

Just then, the telephone rang. “George,” called Stanley’s mother a moment later. “It’s a journalist from WUSA. They’re asking about our very own flag—Stanley!”

Stanley felt something rise up from deep inside him. “I AM NOT A FLAG!” he screamed.

Arthur gaped at Stanley, and suddenly, both their parents were standing in the doorway.

“Stanley,” his mother said slowly. “Are you feeling all right?”

Without answering, Stanley sprinted straight to the living room and slid under the couch, where nobody could bother him.

The fabric on the couch’s bottom bobbed up and down just above Stanley’s nose. Arthur was bouncing on it, flipping channels on TV. “We’re on this channel, too!” Arthur cried happily.

I wish I’d never been flattened, he thought.

The phone had been ringing all morning. Every time, it was another journalist asking to speak with Stanley, who wouldn’t come out from under the couch.

Then the doorbell rang. From his hiding place, Stanley called, “I’m not here!”

The doorbell rang again. Stanley heard his father clear his throat, open the door, and say, “I’m sorry, but—”

“The governor!” a voice boomed. “And this here is Officer Williams and Officer Parker!”