Read The Vacant Throne: The Legend Of Kairu Vol 3 Online

The Vacant Throne: The Legend Of Kairu Vol 3 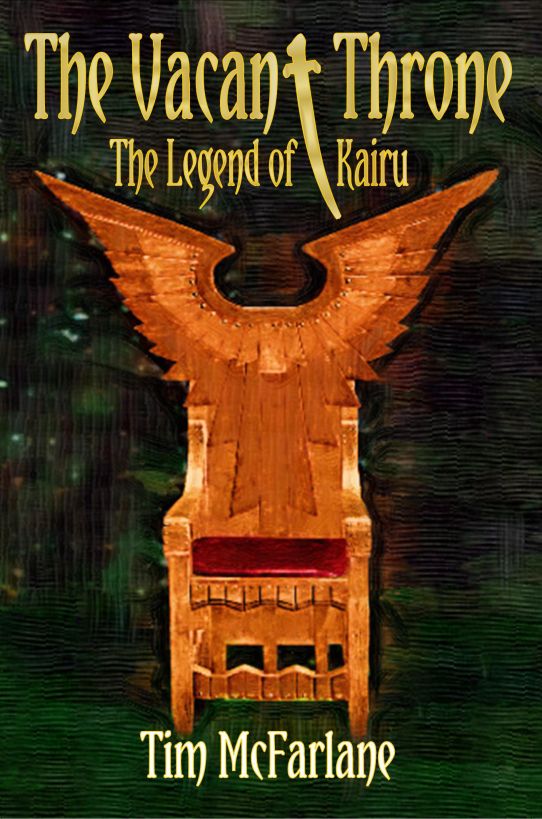 The Legend of Kairu:
Vol 2

This ebook is licensed
for your personal enjoyment only. This ebook may not be re-sold or
given away to other people. If you would like to share this book
with another person, please purchase an additional copy for each
recipient. If you’re reading this book and did not purchase it, or
it was not purchased for your use only, then please return to
Smashwords.com and purchase your own copy. Thank you for respecting
the hard work of this author.

All right reserved. No
part of this publication may be reproduced or transmitted, in any
form or by any means, without permission of the publishers or
author. Excepting brief quotes used in reviews.

Any reference to real
names and places are purely fictional and are constructs of the
author. Any offence the references produce is unintentional and in
no way reflect the reality of any locations involved.

A copy of this work is
available though the British Library.

To my girlfriend,
Alex.

Who believed in this
series back when it was nothing

but incoherent
ramblings and half formed ideas.

Not that much has
changed... 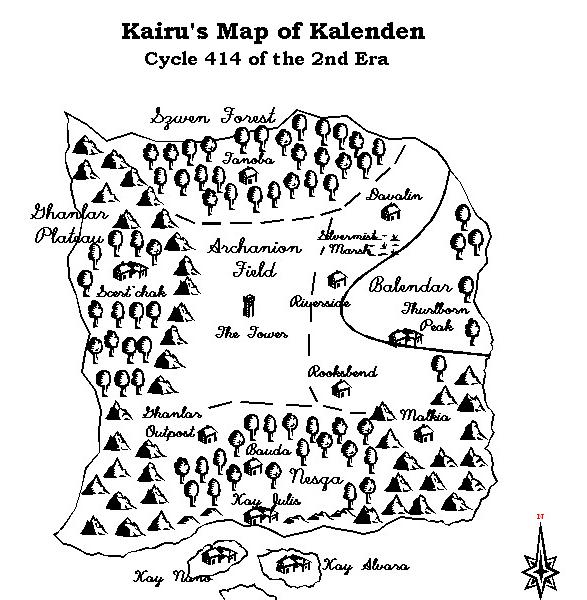 It has been over two cycles of the
seasons since the young Mage, Andy Holcombe, set out from the Tower
of the Watchful Eye with Cathy, the demon he shares his soul with.
His task was simple, gather four items from the corners of Kalenden
and return them to his Master, the Keeper of the Archives.

However, because Andy helped the
Evenawks rebel against the Mages, a civil war started within the
Tower. Master Pryce, head of the School of the Elemental, was
revealed to be possessed by a powerful demon and started a war
against the other Masters with his army of possessed Mages. Andy
returned home and fought his way to the Keeper.

Upon Andy’s arrival,
the Keeper revealed his master plan of destroying magic to free the
oppressed provinces from the Tower’s influence. Having seen the
negatives of magic his whole life, the Keeper tried to persuade
Andy to see his way. Andy, seeing the Tower, not magic, as the
source of the problems, banished the Tower to the Spirit Plane by
deliberately mis-performing the spell.

With nowhere to go,
and little money, Andy travelled the countryside. He lived with
Aaron and Natalie, friends from his journey, in Balendar before
moving on to Donkor in Nesqa. He was forced to keep moving as the
citizens of Kalenden became more hostile to magic users.

The Mages who weren’t
in the Tower at the time of its banishment were forced to hide
their identities for fear of being attacked by the angry mobs. Some
tried to band together to fill the void left by the Tower but were
quickly struck down. The king of Balendar and the Emperor of Nesqa,
quickly tried to regain control of the chaotic
provinces.

Out west, in the
Ghanlar Plateau, the Evenawk Bird People were reclaiming their
ancestral land from the remaining Tower Mages. The war would be a
quick one, but Andy didn’t want any part of it. He moved to the one
place he knew he would be safe. He headed north and joined the Nao,
the Tree People of the Szwen Forest.

They welcomed Andy back and made him an
offer he couldn’t refuse. They would grow him a house close to the
lands of Balendar if he took on the role of Kairu, Guardian of the
Forest. Andy accepted and has been living in the forest for over a
cycle now.

It was driving Cathy crazy...

I opened my eyes and
stretched out in my poorly constructed bed. Its wonky form was my
own fault, but it was the first thing I had ever built. Having no
previous experience in woodworking, I was just happy it never broke
in the middle of the night while I slept.

At least it turned
out better than the bookcase,
Cathy said.
I felt her engulf my mind before retreating to her usual spot in
the back.
Do you want me to show you the
memory?

“
Oh, Void, no,” I
responded. “Looking at the thing every day is enough of a
reminder.”

The bookcase only had
one remaining shelf holding the book of spells and rituals I’d
saved from the Tower and a couple of fiction books picked up on my
travels. The other shelves broke when the second shelf down fell
off its bearings and took everything with it. It was a nasty mess.
The potted Ru flower I had received from Huntress Fawna had fallen
and rooted into the dirt floor. Little orange and red flowers had
spread around the bookcase.

I chuckled. “I was thinking more along
the lines of hunting down bandits. It has been quiet in the forest
lately. With the winter season coming up, we should stock up on
trading supplies. I think a big, juicy bandit camp will give us
enough trade items.”

I could feel Cathy’s
happiness grow.
That is a good idea. Can
we use Ice Fists this time?

I sat up into the bed and heard it
creak. I waited for a second before standing up. The bed remained
in one piece for another day. I crossed the house to the crooked
dresser with the one stuck drawer and grabbed a set of simple
clothes. I had to ditch my Mage robes after I heard of the attacks
on anyone with magic. Dealing with people was hard enough without
them wanting to break your nose.

Out of the five pieces of furniture I
had built, the dresser was probably the best. The bookcase and bed
were disasters, the chair’s legs were uneven and the table couldn’t
hold any weight. The fact that only one dresser drawer was stuck
was a sign I was improving.

Without money to buy
proper furniture, I was forced to build my own out of dead trees
and sticks. The Nao don’t need or use furniture because their
bodies act the same way as trees. I was just happy they grew me an
impressive house. It had protected me against some of the worst
winds, rains and snows I had ever seen. But I still wanted to pick
up some extra blankets for the winter. I had made the mistake of
not worrying about it last winter.

Fully dressed, I attached the sheath to
my waist and slid my short sword in. It was a basic iron short
sword I picked up shortly after I left Aaron’s farm. The weapon was
more for show so I could be easily mistaken for a farmer or peasant
whenever I go to Davalin, the closest major city, to trade.

I shut the door to
the house and welcomed the early morning with another stretch. The
claustrophobic Szwen Forest loomed over me but I was close enough
to the edge that I could stare out into the countryside. The
Balendar farmlands and Archanion Field stretched out as far as the
eye could see. As boring as the forest could be, it had started to
feel a bit like home.

Not by much
though,
Cathy added.

I turned my attention back to the
forest and stretched out with my mind. The buzz of forest life
filled my head and I tuned it out and focused for Human or Nao life
forces. It was part of my guardian duties for the Nao; assist the
Nao huntresses in fending off bandits and redirecting lost
travellers.

I caught the
unmistakable feeling of Nao magic and focused on it, trying to see
through it. Three Nao huntresses had cast a spell over eight
Humans. I had to re-count the Humans to be sure. This was the
largest group I had seen since spring when a caravan was attacked
outside the forest. When I counted eight Humans the second time, I
broke my focus on the group and sprinted into their
direction.

The Nao magic was
mainly Illusion work to scare away travellers. If they deemed
someone a threat, they would trick the unsuspecting person into a
false sense of security and feed on their souls. I had always
thought the soul sucking was a horror story to keep children in
line, but I had seen it over the summer. My appetite didn’t return
for two days.

What do you think it
will be?
Cathy asked.

If the Nao are aggressive, it will be
an armed group.

The bandits came to
us today,
Cathy said excitedly.

I wove my way through
the trees and bushes of the forest with practiced ease. One of my
first goals had been to map out the forest in my head for faster
travel and improve my physique. I am proud to say that I am no
longer the weakling I was when I left the Tower for the first
time.

I emerged into the
clearing where Huntress Fawna and two other Nao surrounded a group
of armed guards. I recognised Fawna by her vine work. Nao bodies
are Human-like, but completely green with a pale light that seems
to glow from within. Leaves and branches grow from the top of their
heads like hair and vines cover their bodies in unique patterns.
Fawna’s vines wrapped around her ankles, travelled up her side and
wrapped again around her biceps.

The Humans weren’t
bandits or even travelling merchants. They were the armed guards of
the city of Davalin; I recognised the blue cross on their shields.
One was a giant of a man in plate mail with a two-handed war hammer
on his back. The leader of the group was a small blonde woman in
well-crafted steel armour, fit for either high standing officials
or royalty. Either wasn’t good news.

I approached Huntress
Fawna quickly and raised my arm. From deep within my body, the
power travelled through me and out of my hand in the form of a
Dispel. It hit Huntress Fawna in the side and I felt the magical
trap break. Huntress Fawna spun towards me and raised her arm, but
dropped it when she recognised me.

I quickly walked into
position in front of the Humans and tried to stand in a
non-threatening manner. “I trust there is a good reason for the
Davalin guard to be trespassing in the Szwen Forest.”

The guardsmen had their swords out and
the Nao were working their way slowly to hide behind me.

“
Watch out, my lady,”
the giant said. His war hammer was ready and looked dangerous.
“He’s a Mage.”

“
But not the one we
are looking for,” the leader said, intrigued. “Put your weapons
down.” Everyone hesitated. “I said put them down!”

The guardsmen put their weapons away
quickly and the giant stared at me with hatred before complying
with the little blonde girl’s command.

The leader turned to me. “We apologise
for entering the forest. I am Lady Sandra Middleton, daughter of
Lord Middleton of Davalin. We are hunting the Mage, Davenport. When
he gave us the slip, we ended up lost in the forest.”

I couldn’t prevent shock from spreading
to my face. I turned to Huntress Fawna. “Has a Mage come through
here recently?”

“
Not to my knowledge,
Kairu. Let me check,” Huntress Fawna answered. Her black eyes
turned grey as she started communicating telepathically with the
other huntresses.

The Perfect Marriage by Kimberla Lawson Roby
Future Perfect by Suzanne Brockmann
Stuff Happens by Will Kostakis
A Summons to New Orleans by Hall, Barbara
The Idea of Love by Patti Callahan Henry
High Stakes Seduction - Book 5 by LeCoeur, Ami
Hot Stories for Cold Nights by Joan Elizabeth Lloyd
Don't Breathe a Word by Holly Cupala
Flashes of Me by Cynthia Sax
Joy by Victoria Christopher Murray
Our partner