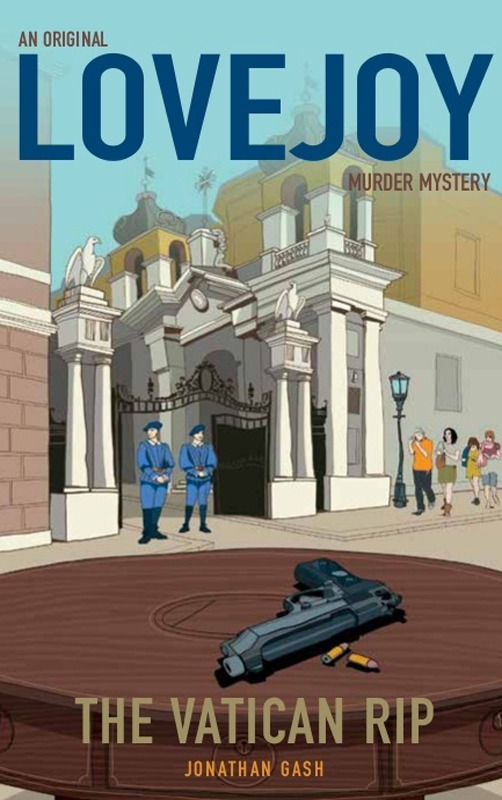 The Sleepers of Erin

The Lies of Fair Ladies

The Sin Within Her Smile

The Grace in Older Women

The Possessions of a Lady

The Rich and the Profane

A Rag, a Bone and a Hank of Hair

Faces in the Pool 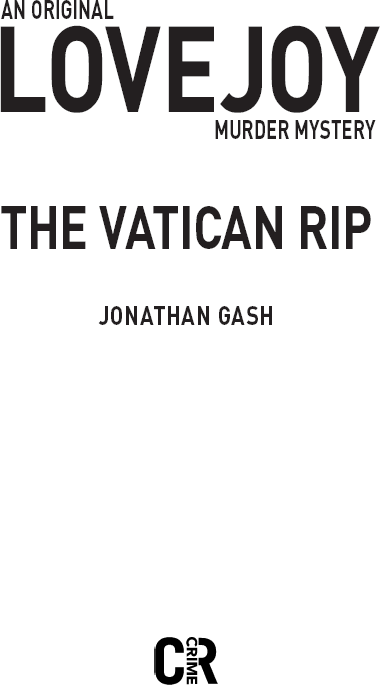 First published in the UK by Collins (The Crime Club), 1981

This edition published by C&R Crime,

The right of Jonathan Gash to be identified as the author of this work has been asserted by him in accordance with the Copyright, Designs and Patents Act 1988

In Rome, effort is unknown, energy is

Dedicated to the Second Biennial Festival of Bolton, Greater Manchester (formerly Lancashire) – August 1981 – in gratitude for the rich appreciation of community feeling instilled in the author by his unique home town.

The trouble with life is, you start off worse and go downhill. I’d bought the rip in winter, two days before my Italian lessons with the delectable Maria were to begin – though I didn’t know that then.

I’m an antique dealer. The antiques game is always at a lowish ebb in January, probably because everybody’s spent up after Christmas and is knackered by the weather anyway, so I was on the scrounge and feeling very sorry for myself. It hadn’t been too easy of late, what with inflation and all that. And the scanty tourists who knock about East Anglia in deep midwinter tend to be holy, on their way to carol services in our ancient little chapels. They aren’t so keen on our priceless (or indeed worthless) antiques.

On this particular day the roads out of my village were bad. There had been one of those heavy snowfalls the previous night after a solid weekend of sustained gales. Typically, the buses never even started out from the nearby town, and as far as civilization was concerned our village might have been on Mars. A couple of lads from Hall Farm managed to shift the worst snowdrifts using tractors and got the south road partially cleared by noon. I was lucky – so I thought – and got a lift in from Ann Scott, the cheerful and pretty lace-mad wife of an insurance assessor. She tried telling me that the famous nineteenth-century torchon lace was superior to Honiton if properly made. We argued all the way. She was wrong, of course. ‘Torchon’ means dishcloth, but she wouldn’t be told. She has a valuable collection of lace samplers I’d been trying to buy from her on tick for years. We’d had several intimate afternoon negotiations. I’d lost every one on a pinfall.

‘You can show me the error of my ways, Lovejoy,’ she said, straight-faced and careful as she dropped me off in front of the town hall. ‘Before five, this afternoon.’

‘Any chance of you selling?’

She smiled, not looking. The traffic swished slowly past through the mush. ‘Come and find out.’

‘When is Henry back?’ I’m always worried about new risks because there are so many old ones knocking about.

She checked the traffic in her driving mirror and pulled out with a cool disregard for the road code. I winced at the squealing tyres and the honks of protest and observed her serene passage off down the High Street. That’s women for you. All the breaks and none of the breakages.

The auction was well under way when I finally made it out of the cold and into the fug.

Seddon’s Auction Rooms is basically a long derelict shed with alleged antiques crammed into every available bit of space. I saw that today’s auctioneer was Millon, a florid-faced, waistcoated know-all who believes the world owes him a living. My spirits rose. He was a newcomer and therefore by definition dimmer even than the regular auctioneers, which is to say beyond belief. Fewer dealers than ever had turned up today on account of the snow. I offered up a prayer of thanks, because fewer bidders means cheaper prices, even among this load of crooks. Still, the one thing you can say about crooks is they’re honest, not like the good old law-abiding public. And speaking of crooks, the auctioneer was gavelling again.

A hand touched my elbow. Even before looking round I knew from the pong it was Tinker. Bleary as ever, a crumpled alcoholic old reject in a stained army greatcoat, greasy of mitten and threadbare of gear. A stub of a person, but my one and only employee. He’s my barker, a sniffer-out of antiques. The greatest.

‘Hiya, Lovejoy. Your crowd from the arcade have gone for a bite.’

I knew better than to argue. Tinker locates dealers and antiques by some kind of mental beam. Somebody morosely bid a fiver for Lot Forty-One and the bidding was off, to the auctioneer’s relief. He didn’t deserve such good fortune. Instead he should have been gaoled, because he had deliberately called a false description, an offence punishable by law. The ‘genuine antique silver bookmark’ was no such thing. Genuine and silver, yes. Antique and a bookmark, no. It was late Victorian and thus not ‘antique’ by honest definition (and here I exclude the Customs Office which, being unable to count above double figures, has reluctantly pretended for years that antiques begin at a hundred years of age). And it was a
page
marker. These delectable little objects are very collectable, being usually silver or even gold. Most have a split blade to slide over a page’s edge leaving the decorated handle protruding. About two-and-a-half inches and all sorts of shapes – scissors, carving knives, pipes, swords, leaves and the like. Lovely. My mouth watered. If I hadn’t been broke . . .

I cheered up even more. She would be back for the paintings which I saw began about Lot Ninety in today’s heap of gunge.

‘Him too.’ My spirits fell again. Lately Jason had been seeing Jane more than he deserved. Only I deserved to see Jane Felsham that much, but seeing I was broke and Jason wealthy . . .

Tinker cleared his throat, warming up for one of his famous rasping coughs. I drew a deep breath to last me through the droplet haze. Tinker’s cough started as a deep rumble full of such powerful reverberations that several of the crowd glanced idly towards the windows, wondering what kind of monster vehicle could possibly be making that racket on East Hill. It then intensified, growling and lifting in tone and bubbling as the phlegm in Tinker’s stringlike windpipe churned. The volume intensified and swelled sending shudders through the brickwork. Finally out it came, a great explosion in a slamming din of sound, a noise so cacophonous it rapped your eardrums. Tinker’s wiry little frame jerked double and bobbed with the effort. It’s a pity they don’t give Olympic coughers’ medals. The Russians wouldn’t stand a chance. Tinker would walk it.

I opened my eyes in relief as the appalling noise dwindled, Tinker rejoined the human race, wiping his nose on the back of his filthy mitten, his rheumy old eyes streaming from the relief of having coughed and survived. The entire auction room was stunned into an appalled silence.

Tinker was contentedly rolling himself a fresh cigarette when he noticed the ominous stillness.

A few of the dealers chuckled and nudged each other. And even Helen from the arcade, the loveliest dealer in East Anglia, smiled at Tinker. The trouble was that Millon chose to be offended, which led to his downfall. Antiques are dear, but there’s nothing so costly as pride.

‘Who made that awful noise?’ he parped. He knew very well who.

‘That corf? Me.’ Tinker was indignant. ‘I said me pardon.’

Millon lost his rag. ‘Get
out
! I will not have this auction interrupted by any old doss-house lounger!’

Poor old Tinker was stricken. He glanced apprehensively at me, knowing I needed him for a Kwangtung temple-door carving I had my eye on among the high numbers. A couple of the local dealers, suddenly nervous, shot glances at me. I saw Alfred Duggins, an elderly bowler-hatted collector of hammered coins, roll his eyes in alarm. He’d known me since I was a callow youth and guessed what was coming.

Mortified, Tinker shuffled sideways towards the door. ‘Sorry, Lovejoy. I’ll see me quack, get something for me chest. Honest.’ He thought I was mad at him for one lousy cough.

I said nothing. I was looking at the floor, planks in a row and worn to the nails by generations of people coming in this crummy auction just because they wanted an antique, a piece of the loving past to cherish them against the shoddy crapology of our modern world. In this generation those ordinary people just happen to be Tinker and me. And you.

‘Do-you-
hear
-me?’ bleated this nerk on the rostrum.

‘Tinker.’ I gave him a quid. My voice sounded funny. ‘Wait in the pub. I’ll only be ten minutes.’

‘Ta. But the auction won’t be over till—’

He peered at my face and then quickly went, his old boots clumping until the door pinged shut behind him. By now old Alfred was at the door, nervously measuring distances for a quick getaway. Trust him to suss me out before the rest.

Millon announced, pompously tugging his waistcoat neater, ‘Now we can get
on
! Lot Forty-One. The bid’s with you, sir.’ He pointed to a tall neat gabardine-suited bloke, who had bid last in a foreign accent. ‘It was fifty pounds. Who’ll give fifty-five?’

I found Helen’s hand on my arm. ‘
Please
no, Lovejoy,’ her voice begged. But it was miles off and I shrugged her away.

The Woman on the Train by Colley, Rupert
Out of the Deep by Gloria Skurzynski
Let Me Love You by Kristin Miller
Slam: A Bad Boy Romance by Holt, Leah
The Christmas Cantata (The Liturgical Mysteries) by Schweizer, Mark
Love Is Lovelier by Jean Brashear
Magic Ponies: A Special Wish by Sue Bentley
Mummy Madness by Andrew Cope
After Earth: A Perfect Beast by Peter David Michael Jan Friedman Robert Greenberger
Contra Natura by Álvaro Pombo
Our partner