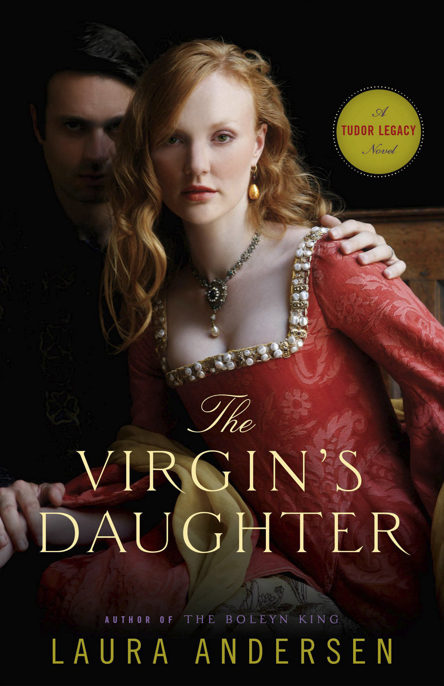 “Powerful…action, intrigue, star-crossed lovers, and all the drama period fans have come to expect…thrilling.”

“Detailed and quick paced, [
The Boleyn Deceit
] will have series fans devouring it and emerging eager for the last book. An excellent recommendation for Philippa Gregory fans.”

“This novel is recommended for all lovers of historical fiction.”

“This entertaining work of alternative history offers plenty to savor for both fans of historical romance and those whose passion is political intrigue….Perfect for fans of Philippa Gregory and Alison Weir, Andersen’s novel admirably takes artistic license with history while remaining true to many aspects of real-world history…Foreshadows a mesmerizing conclusion to the trilogy.”

“Elaborately threaded with historical details…the second in Andersen’s Boleyn family saga will appeal to fans of historical fiction….This is an intriguing reimagining of Tudor England and the treacheries of court life.”

“Andersen’s novel, alive with historical flair and drama, satisfies both curious and imaginative Tudor aficionados…her multidimensional characters are so real that readers will wish it was history and eagerly await the next in the trilogy.”

“A surprising gem and a thoroughly enjoyable read….Andersen has given Anne Boleyn fans the happy ending we desire.”

“An absolutely gorgeous manifestation of that urge to bring an intriguing story forward….This is history-plus-more….The first in a trilogy, so brilliantly conceived and richly executed, fans of bold, historical dramas are likely to gobble them up as soon as they appear.”

“A glamorous royal drama—but
The Boleyn King
offers a refreshingly offbeat, counterfactual take on the familiar story….The first book in a trilogy that promises to be inventive and entertaining.”

“A fascinating journey into what might have been, this novel of alternate history will keep you turning the pages and leave you hoping for a sequel.”

“From the intrigue of the Tudor court to the battlefields of France, you will be entranced by the power, emotion, and sweeping romance of this spell-binding novel. I loved it and can’t wait for the next book in the series!”

“ ‘
What if…
’ With these tantalizing words, Laura Andersen creates a fresh and vividly realized alternative world where not only does Anne Boleyn live, but also gives birth to a healthy son who will become King. With the introduction of Minuette, Princess Elizabeth’s lady-in-waiting, we meet an extraordinary young woman who embodies love and loyalty, and who fights to find the humanity at the heart of the most glamorous—and dangerous—courts in Europe.”

“
The Boleyn King
is a riveting page-turner of a tale. I could not put it down. Laura Andersen’s splendidly imagined novel provides a fresh take on an era in history that’s been done to death. For historical fiction fans and Tudor aficionados,
The Boleyn King
is a must-read.”

“This terrific debut brings to life a fascinating page of Tudor history, vividly reimagined with a crucial twist: What if Anne Boleyn had a son who lived to become King?
The Boleyn King
deftly blends compelling characters, flawless social history, and courtly romance into an enthralling tale that’s impossible to put down.”

“Full of intrigue, conspiracies, and the accurate details so essential to good historical fiction,
The Boleyn King
is the ultimate game of
What if?
Anyone who has even the slightest fascination with the Tudors will want to devour this deletectable novel in a single sitting—and not only to see what might have happened to England had Anne Boleyn kept her head.”

The Virgin’s Daughter
is a work of historical fiction. Apart from the well-known actual people, events, and locales that figure in the narrative, all names, characters, places, and incidents are the products of the author’s imagination or are used fictitiously. Any resemblance to current events or locales, or to living persons, is entirely coincidental.

Published in the United States by Ballantine Books, an imprint of Random House, a division of Penguin Random House LLC, New York.

BALLANTINE and the HOUSE colophon are registered trademarks of Penguin Random House LLC.

This book contains an excerpt from the forthcoming book
The Concubine’s Daughter
by Laura Andersen. This excerpt has been set for this edition only and may not reflect the final content of the forthcoming edition.

Excerpt from
The Virgin’s Spy

E
lizabeth Tudor—Queen of England, Ireland, and France; Supreme Head of the Church of England; estranged wife of King Philip of Spain; warrior savior or bastard heretic depending on one’s point of view—walked the grounds of a quiet country manor in company of the woman once her dearest friend, and allowed herself to be at ease.

Or relative ease for, of course, a queen could never entirely unbend. Not when there were so many eager to relieve her of her crown.

But today was not a day for such concerns. Elizabeth would once have linked arms with Minuette Courtenay, Duchess of Exeter, as they walked, but that was many years and even more choices ago. But their steps still matched and so did their thoughts.

“The boy is besotted with you,” Elizabeth noted drily.

Minuette’s amused laughter rang as clear as childhood. “Julien LeClerc is sixteen years old. He’s besotted with every female he lays eyes on.”

“Does Dominic take his infatuation as lightly as you do?”

“Are you implying my husband has cause for jealousy?” There was the slightest edge to Minuette’s teasing question. She had always been highly protective of Dominic.

“I am implying only that your husband’s sense of humour has never been highly developed, least of all where you and other men are concerned.”

Even a queen occasionally slipped in her choice of words; a shiver passed between them and Elizabeth was grateful when Minuette neatly changed the subject. “It is good of you to allow Anabel to come this summer, despite our French guests in residence.”

Only a handful of people used that particular name, for Anabel was properly Her Royal Highness Anne Isabella, Princess of Wales and only daughter of the Queen of England and the King of Spain. At six years old, Anabel was already a precocious mix of Elizabeth’s cleverness and Philip’s cold-blooded practicality. She had her own household mainly based at Ashridge, but for the last three summers Elizabeth had sent Anabel to the informal Courtenay household at Wynfield Mote. She wanted her daughter to have some warmth in her childhood, and no one better to provide it than Minuette. It also provided Anabel with friends, for Minuette had four children of her own, including twins born the same month as the young princess.

The Vines by Christopher Rice
Sons of Taranis by S J A Turney
The Stargazer's Sister by Carrie Brown
The Trouble with Valentine’s by Kelly Hunter
The Mage of Orlon: The beginning by Gene Rager
Gift of Revelation by Robert Fleming
The Minstrel in the Tower by Gloria Skurzynski
Jackson's Dilemma by Iris Murdoch
Hideous Love: The Story of the Girl Who Wrote Frankenstein by Stephanie Hemphill
Deadly Force by Keith Douglass
Our partner