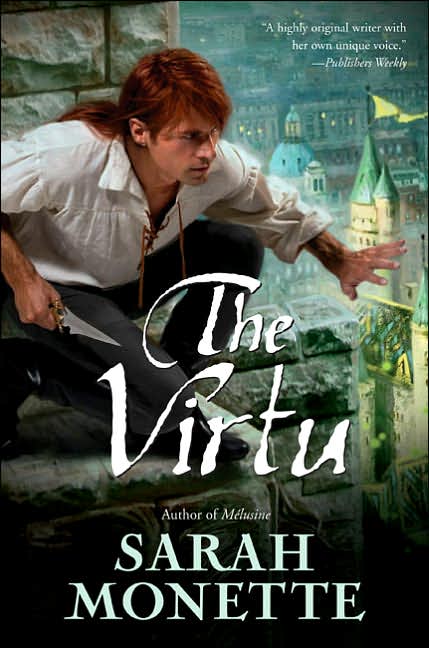 “
Open this book, and fall under its spell,” said Joan D. Vinge of
Mélusine,
calling it “a spellbinding, gut-wrenching, breathtaking quest that resonates with truth and heart.” Now the wizard Felix and the thief Mildmay must return to the wondrous city of Mélusine, repair that which has been broken, and face the dark shadows of their pasts…

Felix Harrowgate was a dashing and powerful wizard until his former master wrenched Felix’s magic from him and used it to shatter the Virtu—the orb that is the keystone for the protections and magic of the wizards of the city. Felix has painfully clawed his way back to sanity, and his only chance to reclaim the life he once knew is to repair the seemingly irreparable—to restore the Virtu.

Mildmay the Fox was an assassin and a cat burglar—until a curse caught up with him and his life changed forever. Haunted by death, his leg damaged by the curse that should have killed him, he does not know what awaits him in Mélusine, but for good or ill, his fate is tied to Felix’s, by blood…and by magic.

On their journey, Felix and Mildmay will encounter friends and enemies old and new, vengeful spirits and ancient goddesses. They will uncover secrets better left buried. But nothing can prepare them for what awaits their return: Felix’s former master, the cruel and decadent wizard Malkar Gennadion…

No part of this book may be reproduced, scanned, or distributed in any printed or electronic form without permission. Please do not participate in or encourage piracy of copyrighted materials in violation of the author’s rights. Purchase only authorized editions. ACE is an imprint of The Berkley Publishing Group. ACE and the “A” design are trademarks belonging to Penguin Group (USA) Inc.

When I opened the door, I could tell that Thamuris was dosed to the gills on laudanum.

“You sure about this?” I said.

Thamuris came drifting into the room like a ghost. His feet were bare, and his hair was down, and he was wearing something that looked basically like a bedsheet. I hoped like fuck nobody’d noticed him on his way here. “I have to,” he said, and there was something about the way he said it—I can’t explain it, but I knew there wasn’t a thing in the world I could say that would mean anything to him. He was past the point where anybody could talk him down. I took a deep breath, let it out, admitted to myself that I was going to get in trouble over this and I was okay with it. Then I shut the door and said, “What d’you want me to do?”

Thamuris had asked me for a favor. Maybe that don’t sound so weird, but you got to understand. He was a Celebrant Celestial, which meant he outranked everybody for a Great Septad mile around, including the lady who ran the Gardens of Nephele. And me, I was just a lamed-up cat burglar who used to murder people for money, no education, no morals, and the only reason people here put up with me at all was my half brother Felix Harrowgate, who was a hocus and could charm the stars down out of the sky besides. So there was no way somebody like Thamuris should’ve been asking somebody like me for favors. But he had.

He wanted to perform a divination, he said, but none of the celebrants would help him. Seemed like they all thought it was a really shitty idea. And maybe it was. I’m annemer, no kind of hocus at all, and you could fill books with what I don’t know about magic, and, I mean, he was dying of consumption. It only figured that there was a Great Septad and a septad and six things he shouldn’t be doing, whether he wanted to on not. But I owed Thamuris. He’d tried to help me when nobody else cared enough to spit on me, when my leg wasn’t healing right and they didn’t want to hear about it because I was a murderer and they’d got some things back to front about my relationship with Felix besides. Which ain’t exactly surprising, seeing as how he was crazy and mixed up in his own head about who I was, and they weren’t about to ask
me
what was going on. And I can even sort of see it, since they thought I’d been beating him up and powers know what all else, and if I was what they thought I was, I only would’ve lied about it anyway.

Only I wasn’t and I wouldn’t, and even if I didn’t blame them exactly, I couldn’t really forgive them either.

It took a second for my question to get through the laudanum to him, but then his whole face lit up, like the big chandelier in the cathedral of Phi-Kethetin that I was probably never going to see again. “I’ve had to adapt the ritual, so you will have to take two parts. You must be both querent and anchor.” He gave me a look like he expected me to know what that meant and to be pissed off about it.

He sat down on the bed. “As my anchor,” he said, “you help me maintain my link to my body, to the tangible world. I will need you to hold onto my hands—that’s where the khresmos can take hold.”

He wanted me to hold his hands. I could do that. “Okay. What about the other thing? The q-whatsit?”

“It is dangerous, stupid, and useless to open oneself to the huphantike without a specific question in mind.”

“It doesn’t work. You can’t ask questions for yourself.”

Mavortian von Heber sure could—him being the only other fortuneteller I’d ever met. But I was willing to bet there was more Mavortian
hadn’t
told me than what he had, and besides I wasn’t about to try and tell Thamuris he didn’t know what he was talking about.

Well, fuck, I thought. I couldn’t think of a single thing I wanted to know. The future felt like a herd of buffalo stampeding straight at me, and all I wanted was to get the fuck out of the way.

“As long as you need,” Thamuris said, and I knew he’d wait all the way to the end of time and out the other side. I was stuck. This was the thing Thamuris wanted. So I racked my brain for some kind of question I could ask that wouldn’t be a cheat or a waste of time, but wouldn’t tell me something I couldn’t stand to live with.

Thamuris said, very quietly, “What are you afraid of?”

“Then ask.” He came and knelt in front of me and held out his hands. “Take my hands and ask.”

It didn’t feel like anything I meant to do, but I found myself holding his hands. They were cold. And I heard myself say in a dry sort of croak, “What’s going to happen to me?”

His fingers suddenly clamped down—not quite hard enough to hurt, but hard enough that I really wasn’t going nowhere—and his eyes rolled back in his head, which ain’t no nice thing to see right up close. I would’ve thought he’d fainted except he didn’t fall down, and he didn’t loose his grip on my hands. Which made it most likely that he’d started his divination, and I just hoped he didn’t need me to do nothing but sit there.

Whatever was going on with Thamuris, it wasn’t nothing I could see or hear or feel. All I could do was sit there with his cold fingers digging into
my
wrists tighter and tighter, waiting for something to happen and hoping it wouldn’t be nothing bad. I had that feeling again, like I was doing something wrong and everybody in the Gardens was going to be pissed at me. But Thamuris trusted me and wanted my help, and so I sat and waited. My new career.

And then, just when I’d pretty much resigned myself to sitting there that way until dawn and Khrysogonos or somebody walked in and found us, and, powers, that was going to be a nasty scene—Thamuris’s eyes came rolling back down, although they didn’t look like his eyes at all. They looked too old and too far away and too mean. It was somebody else looking at me out of Thamuris’s eyes. I don’t know who, and I don’t want to. I knew whatever this person had to say to me I didn’t want to hear it, but I wasn’t going to be able to break Thamuris’s grip without hurting him, so there was nothing to do but sit there and take it.

Going Up! by Amy Lane
All I Need (Hearts of the South) by Linda Winfree
Power to the Max by Jasmine Haynes
Venice in the Moonlight by Elizabeth McKenna
A Mother's Story by Rosie Batty
That One Time by Marian Tee
DraculaVille - New York - Book One by Lara Nance
Daylight on Iron Mountain by David Wingrove
In Real Life by Jessica Love
The Proposition by Judith Ivory
Our partner