The Visions of Ransom Lake 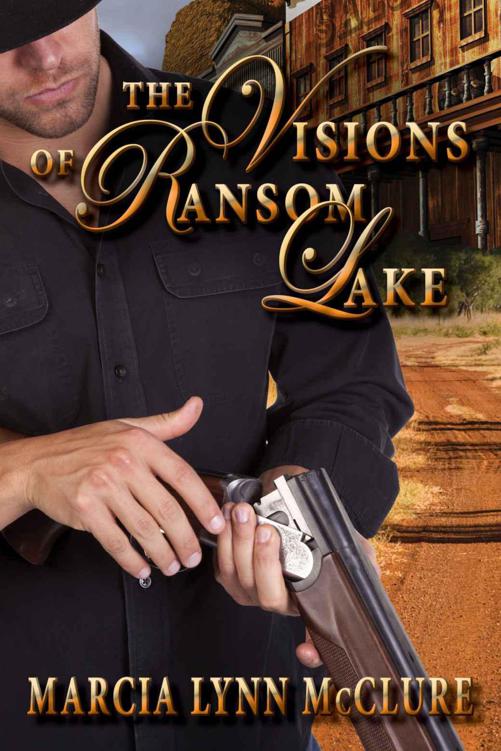 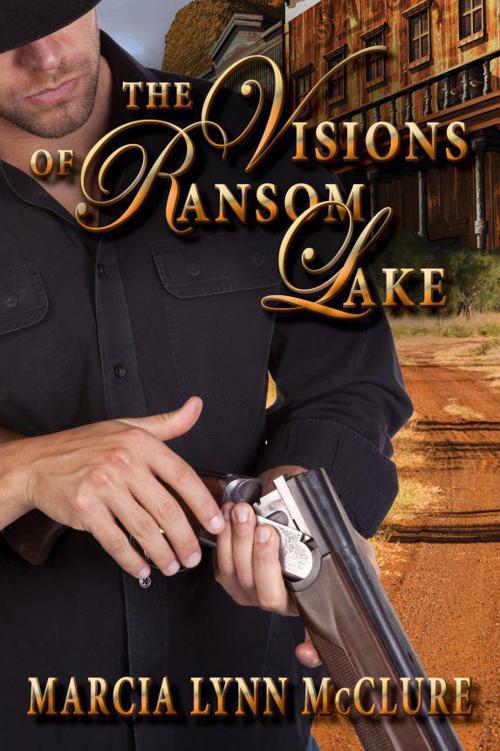 The Visions of Ransom Lake
by Marcia Lynn McClure

All rights reserved. Except as permitted under the US Copyright Act of 1976, the contents of this book may not be reproduced, transmitted, or distributed in any part or by any means without the prior written consent of the author and/or publisher.

All character names and personalities in this work of fiction are entirely fictional,

created solely in the imagination of the author.

Any resemblance to any person living or dead is coincidental.

The Visions of Ransom Lake
: a novel/by Marcia Lynn McClure.

For our beloved intrigue with silver queens and old things.

“
Oh, Vonnie, this is so exciting! Just think…we’re out west! Really west like we’ve only read about. We’re actually here!”

“
Hush, Vaden. For pity’s sake, hush! My head is pounding from your endless chatter,” Yvonne Valmont sighed, placing a weary finger to her even wearier temple.

“
But, Vonnie, just look at this land. At the space! Gaze on the beauty of that horizon,” Vaden exclaimed, marveling at the beautiful, white, fluffy clouds drifting across the bluest of blue sky. “It’s as if…as if our spirits can breathe out here! And when we get to Aunt Myra and Uncle Dan’s little town…well, they’re sure to have quaint little town socials and pumpkin patches and enormous red barns and quilting bees and cowboys and…” Vaden rambled as she gazed dreamily out the stagecoach window.

“
And gunmen and bank robbers and wells instead of pumps and plumbing and bedbugs and horse manure in the middle of the street,” Yvonne added with a prominent tone of sarcasm.

But Vaden Valmont was undaunted. Nothing or no one, not even her prim and proper, ever-apathetic older sister, Yvonne, could squelch her enthusiasm about the journey they were taking and the exciting life experience surely awaiting them. So she smiled and shook her head as her sister frowned in irritation and closed her eyes.

“
Oh, Vonnie, you have no appreciation of nature’s beauty, no sense of exploration or adventure, no dreams.” Turning her attention once more to the landscape outside the stagecoach, Vaden sighed and added, “How can you enjoy life with such a dreary attitude toward existence?” The stage rattled on, and Vaden endeavored to keep her excitement to herself.

It was true Vaden cherished her sister, Yvonne—adored, admired, and loved her. But Vaden could never quite understand Yvonne’s often rather pessimistic attitude toward the simple joys of living. It was Vaden’s opinion Yvonne was far too concerned with propriety and far too incessantly worried about the serious concerns in life. She felt Yvonne spent much too much of her time laboring over her own appearance. It was true Yvonne was a profound beauty, and she labored diligently to present herself as such. However, Vaden thought it a waste of life to agonize over endeavoring to appear so flawless. She preferred to spend more time in studying other people, not having other people study her. People were interesting to Vaden, and this trip she and her sister were making west, to live new experiences and meet different people, seemed far beyond fascinating to her.

The new scents and the freshness of the unfamiliar dry air of the western United States sent Vaden’s imagination whirling with excitement. As she watched the passing trees, weeds, and wildflowers from the stagecoach window, she thought again of how magnificent it was to travel far from home to a different place. The very idea of it was truly romantic! Yet as Yvonne squealed and angrily brushed a large black-and-yellow spider from her sleeve, Vaden sighed, disappointed at her sister’s inability to simply enjoy the novelty of their adventure.

“
My darlin’s!” Myra Valmont sighed. She dramatically put a hand to her chest as she watched her two lovely nieces descending from the stagecoach. “My own girls! How…how lovely you’ve grown to be! I half-expected to see you two still in braids and stockin’s.”

Yvonne stepped down first. Gracefully descending the stagecoach steps, she hugged her aunt affectionately. “Vaden should still be dressed in braids and short skirts, Auntie Myra, but I’m quite grown up. Don’t you think?” she asked. Yvonne did not intend to appear greatly conceited. It was simply her naive, sometimes tactless manner. She did, at times, have a playful aspect to her nature kith and kin to her sister’s, in fact. However, in public she rarely displayed it.

Myra shook her head in delighted disbelief as she took Yvonne’s lovely face in her hands, marveling at the girl’s beauty. Yvonne was tall and slender, nearly as tall as Myra. Her raven black hair was boosted high and impeccably styled, and her hat sat atop her head with just the perfect pitch and angle. Her eyes were the deepest of browns and her fair complexion flawlessly free from freckle or blemish of any sort.

“
Auntie Myra! Auntie!” Vaden called as she stood perched in the stagecoach doorway.

Myra Valmont released Yvonne and looked up to see her younger niece exit excitedly from the conveyance in a solitary leap from coach to ground. The small, awkward stage steps had been completely ignored, replaced by one hurdle of youthful exuberance. Vaden rushed forward, throwing her arms tightly around her aunt’s neck, and Myra laughed. “Dear Vaden. As cheerful and carefree as always. Now
you
haven’t changed all that much, have you?”

“
I take offense, Auntie,” Vaden claimed, though still smiling and obviously elated. Her dark green eyes twinkled brightly as she continued, “You think Vonnie an angel, but in me you see no change?”

Myra shook her head. “Oh, I see that you’ve grown. I only meant you…your spirit is unchanged. And
that
, my other angel, is a heavenly thing.” Myra marveled at how Vaden had changed, however. Her striking nut-brown hair was pulled up, but not nearly as perfectly and neatly as her sister’s. Vaden’s complexion was smooth and faultless too, but a bit darker than her sister’s, and Myra had no doubt Yvonne took greater care to protect her porcelain skin from the sun. Vaden was smaller by several inches, and it emphasized her appearing younger and less poised. Myra could only smile at the girl. Secretly, she had always favored Vaden. Vaden’s eyes flashed with a deep love of life, and Myra was completely invigorated by merely being in her company, tasting the joy exuded by her spirit.

“
Let’s get you two settled in. Your Uncle Danny is out just now, but when he gets back he’ll be glad to see you here safe and sound. Oh, I’ve such plans, girls! And I know you’ll like it out here. I know you will,” Myra assured them.

Then the attention of all three was arrested by a wet, mucking sound. Yvonne looked down to see her freshly polished boots ankle-deep in a pile of soft, moist, brownish lumps. She sighed and said, “You see, Vaden, horse manure.”

Vaden clamped one hand over her mouth to suppress the wild giggle begging release. Yvonne glared at her. Myra made no effort to hide her amusement and laughed out loud. The song of Myra’s delightful laughter could cheer even the coldest of hearts, and Yvonne, proper and serious-minded though she tended to be, giggled at the humor of the situation as well.

Myra dabbed at the mirthful moisture in her eyes and sighed. “Oh, Yvonne, you do need to watch your step a bit more carefully hereabout. But you’ll love it, you’ll see.”

Soon after, having changed to more comfortable day dresses, Vaden and Yvonne sipped tall glasses of refreshment as they sat at a small table inside the general mercantile. Their Uncle Dan and Aunt Myra owned the mercantile, and both girls smiled contentedly as they listened to their aunt’s plans to add a dress shop in one of the back rooms.

“
I know we can do it, girls,” Myra assured them. “You two are excellent seamstresses. It comes from your mother’s diligence, no doubt. And I’m a fair hand myself. There have been so many new people move into the county, and I just know we can tempt the ladyfolk around here. Oh, I’ve such ideas! And besides, your Uncle Danny’s leg is givin’ him so much trouble these days. We really do need the help in the store. There’ve been times lately when I can hardly keep up with the customers.”

“
Mother knew we would be a help to you, Aunt Myra. That’s why she let us come,” Yvonne reminded.

“
I only wish we never had to go back,” Vaden sighed. Standing, she strolled dreamily to the open door looking out onto the road. “I think I should have been born here.”

Myra chuckled. “You may not think so for very long, Vaden. It’s hard work that’s needed out here.”

“
Hard work is good for people, Auntie. It keeps their bodies strong and their minds busy. It’s what God intended. ‘Idle hands,’ you know,” Vaden stated.

“
Vaden would not see a gray cloud were she standing in the midst of a hurricane, Auntie,” Yvonne said as she smiled at her sister. Yvonne secretly admired Vaden’s positive manner. She worried about it too, for she feared one day there would be something to blacken Vaden’s happy heart.

“
That’s why Vonnie and I love each other so dearly, Auntie. We balance each other. She helps me to keep my feet on the ground, and I help her to have an occasional glimpse of the sky,” Vaden explained, teasingly wrinkling her nose at Yvonne.

Myra laughed and shook her head. “Oh, I knew you girls would do me good. It’s goin’ to be a wonderful year. I know I’ll just wither up and die when you leave at the end of next summer.”

“
Then don’t think of it now, Auntie. It’s an entire twelve months off in the distance, and I…” Vaden stopped midsentence, her attention suddenly arrested by an approaching buckboard—rather, by the person driving the fine-looking team pulling it. “Now, there’s an intriguing-looking character,” she mused aloud. Yvonne and Myra both rose and went to the door, their eyes following Vaden’s gaze down the road.

“
Character is exactly it,” Myra confirmed. “Well, girls…there you have it. The county hermit,” she announced, nodding in the direction of the approaching buckboard and its driver.

“
Quit staring, Vaden! I swear, you have no manners,” Yvonne scolded, trying to shift her own attention from the vision. But Vaden could not tear her gaze away and continued to stare curiously as the team pulled the buckboard closer to the store.