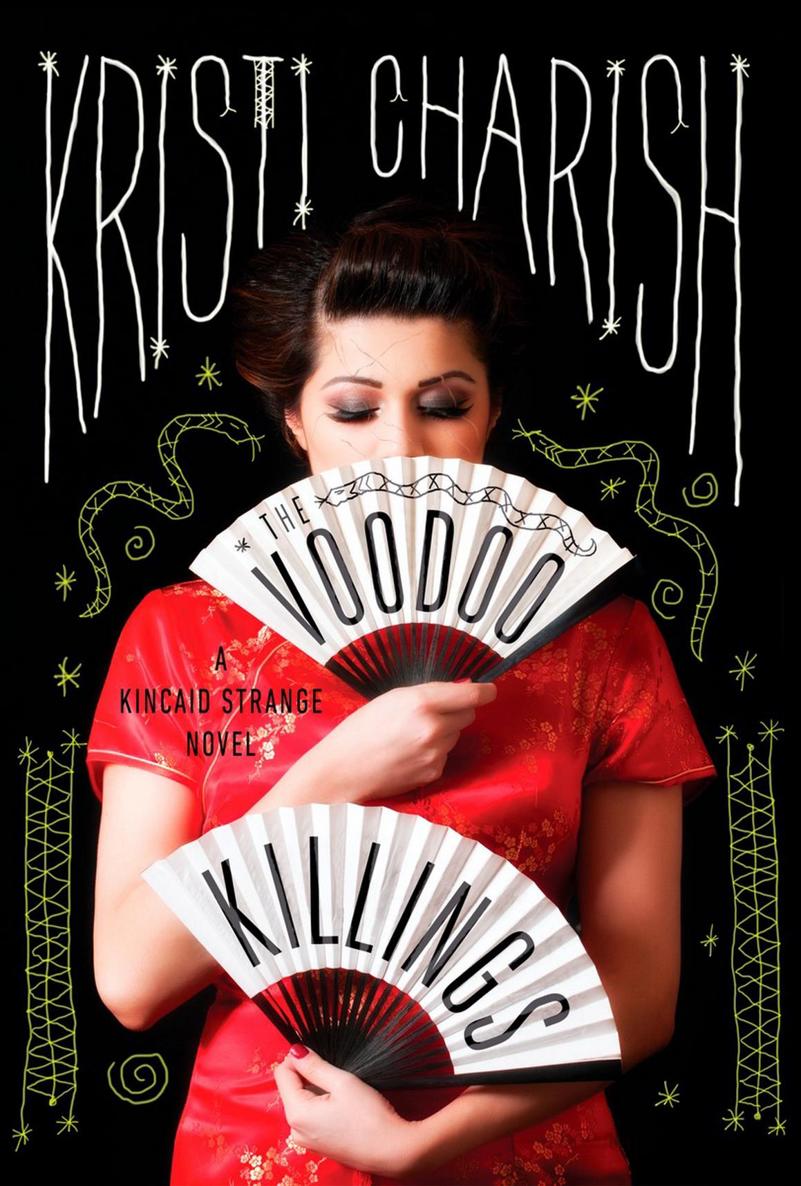 PRAISE FOR
THE VOODOO KILLINGS

“
The Voodoo Killings
is such a spectacular mix of urban fantasy and mystery it kept me up to two in the morning. Give me more Kincaid Strange.”

“Kristi Charish grabs the zombie novel by the throat and drags it back to square one, creating a voodoo zombie mystery that is a fresh and fantastic take on a whole genre. A must read!”

PETER CLINES
, author of
The Fold
,
14
and the Ex-Heroes series

“What a rush! Highly entertaining, original, and brimming with wit—and zombies in closets—I loved
The Voodoo Killings
. Can’t wait for the next!”

JULIE E CZERNEDA
, author of
This Gulf of Time and Stars

“This was an absolute delight to read. With a smart, cynical hero and zombies whose morals are as gray as the brains they snack on,
The Voodoo Killings
offers a fun and creepy new world—or two—to get lost in.”

PATRICK WEEKES
, author of the Rogues of the Republic series

“I couldn’t put it down! Kincaid Strange is such a kick-ass protagonist. There hasn’t been a character like her in years and I can’t wait to read more!”

“Really liked this one—I can see the comparisons to Kelley Armstrong, but also felt strong comparisons to the Darynda Jones series and even to Charish’s own Owl series….Great pacing in this one, and a diverse cast of characters who will grow well with the series. I’m looking forward to book two and to seeing what will happen.” 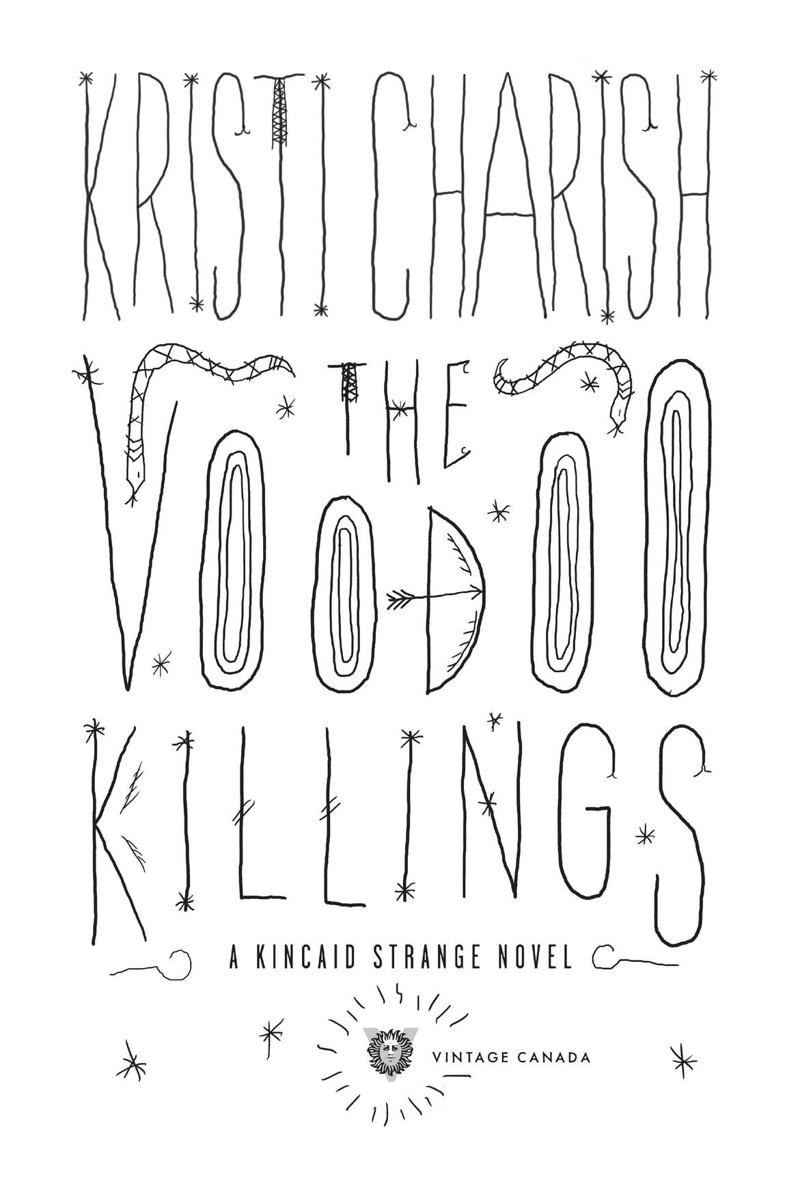 All rights reserved under International and Pan-American Copyright Conventions. No part of this book may be reproduced in any form or by any electronic or mechanical means, including information storage and retrieval systems, without permission in writing from the publisher, except by a reviewer, who may quote brief passages in a review.

Vintage Canada with colophon is a registered trademark.

Chapter 2: No Substitute for the Real Thing

Chapter 16: You Can’t Take It With You

Chapter 17: The Living and the Dead

Chapter 25: The Devil’s In the Details

To anyone I know who is stuck on the Otherside

My cellphone rang six times before I managed to fish it out from underneath the stack of receipts scattered over the desk. I swear to god, if my ex, Aaron, is trying to get a hold of me again…

It wasn’t Aaron, though. It was a number I didn’t recognize.

I scrunched my forehead and leaned against the kitchen counter. “Uh-huh.”

“Yeah, umm, one who isn’t too gooey, still looks pretty normal, can walk—” He snuffled like he had covered the receiver. Muted whispering followed. “It also has to have its ID. How much would that be?”

I pinched the bridge of my nose. “Look, kid—I’m not raising you a zombie so you can send it to buy beer. Now hang up or I’ll track your parents down.” I tossed the phone back on the counter.

Damn kids. I closed my eyes. I never should have put that line about zombies in my listings. Apparently zombie mascots were in this season.

I reached for the half-finished mug of Japanese noodles. The mug, a souvenir from my own college days, had been crazy-glued back together more times than was healthy—for me or the mug. The handle more so than the rest. And, as if that very thought was action, it snapped off, sending what was left of my dinner over the desk.

Damn it. I swept most of the broth onto the floor with my arm, but not before it reached the curse book I’d left open. I picked it up to assess the damage. The corners of the pages and back cover were soaked through with Japanese chili broth. Of everything on the desk the noodles could have soaked, it had to be
Curses of Louisiana
, the sole book I had buyers for on eBay.

Great. Just spectacular. I tossed it on the couch. Maybe I could hair-dry or microwave it back to sellable….

The phone rang again. “Oh, you’ve got to be kidding me.” I grabbed it. “Listen, kid, I don’t care which one of your little friends you stick on the phone, I’m not raising you a beer zombie. Got it?”

“Ahh-hi,” an uncomfortable, unmistakably adult male voice said. “Is this Kincaid Strange, practitioner? I was told you handle zombies.”

I sighed. “Look, buddy, I don’t do zombies for parties, and when I do do zombies, it’s permits only. The best I can give you is a ghost: no kids, no suicides. If you want one of those and can construct your request in a way that doesn’t involve Elvis or Marilyn, I might be able to help you.”

I ran through the possibilities in my head. One, he was nuts. Two, I was talking to a ghost who’d accidentally possessed a phone and then confused itself. Seattle had banned pay phones three years back—way too easy to possess—so that was unlikely.

Still, it was more plausible than the third option: that I was speaking with a newly raised zombie who carried a cellphone.

Real zombie or imaginary, I’d be the last number the cops saw in his call list, and if he started biting people…I had to go take a look.

I rifled through the desk drawer until I found a pen and paper. “So…what did you say your name was again?”

“You didn’t ask. Cameron. Or that’s what the wallet says.”

“Okay, you can still read. That’s a good sign. Listen, Cameron, where are you?”

If he really was a zombie, that wasn’t surprising. Short-term memory goes fast. Still, zombies tend to wander back to familiar places, like homing pigeons.

I heard boots scrape against wood. “There are docks across the road, and trains.” Each word was deliberate and careful. The more he spoke, the more I was convinced this guy might be the real thing. It sure as hell wasn’t a ghost calling me, since it wouldn’t be able to generate the background noise. Well, unless it was a poltergeist…

I pushed that thought aside. With a poltergeist, the call would have deteriorated to insults by now.

A bar by the docks. “Is there a yellow banner hanging above the doorway, below a burnt-out set of neon lights?”

“Yes. The bartender—he gave me your card and said to call.”

Randall would do that. So Cameron was outside Catamaran’s, the local sports bar. I was not happy Randall hadn’t bothered to call me himself, but at least he’d know what to do with the zombie until I got there.

“Okay, Cameron,” I said as I slung my leather biker jacket over my shoulders and tied my black curls into a messy ponytail. “Do exactly as I say. Walk back inside. Find Randall, who is likely the one who gave you my card. He’s the big Asian guy with tattoos. Tell him Kincaid is on her way. He’ll tell you where to sit. No talking to anyone else, and no eye contact. Can you do that?”

He didn’t sound that far gone. Never hurts to spell things out, though. “One last thing—and it’s important. Whatever you do, no biting. If you bite someone, I can’t help you. Got it?”

“Sure,” he said, with less hesitation in his voice. Not that far gone.

“Repeat it back to me, Cameron—all of it.” He did, and then I made him repeat it three more times until I was satisfied he’d remember.

As soon as I hung up, I called Catamaran’s. Randall and I went way back; his family had been big in the Seattle practitioner community, though Randall never took it up. I used to babysit his kids when I was back in high school. He and I were still friendly, but he made no secret that he didn’t approve of my career choice. Said no good ever came of using Otherside, that tapping the afterlife is a crutch the living use so they don’t have to let go of the dead. Eventually, you get to the point where you can’t stop using it or it drives you mad, he said. I didn’t quite buy it, though I couldn’t blame him for having an allergy to practitioners, considering his wife ran off with a voodoo priest ten years back.

The joys of caller ID.

“Wondered how fast you’d be calling,” he continued. He had the low, intimidating voice of a full-contact-sport referee. “He one of yours?”

Fearless In Love (The Maverick Billionaires, Book 3) by Bella Andre, Jennifer Skully
The Cat Who Played Post Office by Lilian Jackson Braun
Origins (The Wasteland Chronicles, #2) by West, Kyle
All That Glitters by J. Minter
Captive Heart by Phoenix Sullivan
Kristmas Collins by Derek Ciccone
In To Blue: Book One Of The Blue Series by Klay, Kassandra
THE DARKEST ANGEL by Gena Showalter
The Cinderella Arrangement by Vanessa Waltz
Night of the Ninjas by Mary Pope Osborne
Our partner