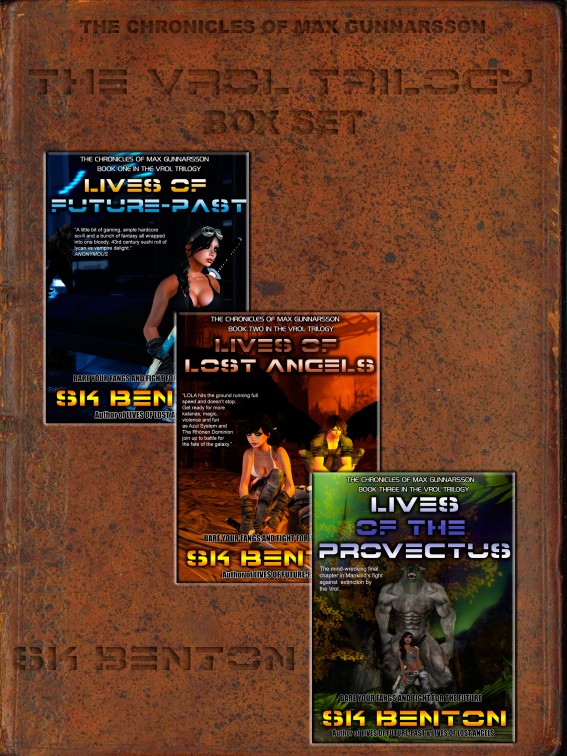 The Chronicles of Max Gunnarsson

The complete works of

This is a work of fiction. Names,
characters, businesses, places, events and incidents are either the
products of the author's imagination or used in a fictitious
manner. Any resemblance to actual persons, living or dead, or
actual events is purely coincidental.

Further, this book is not intended as a
substitute for the medical advice of physicians. The reader should
regularly consult a physician in matters relating to his/her health
and particularly with respect to any symptoms that may require
diagnosis or medical attention, and most definitely not try to use
magic of any sort because it really does not exist in our world -
as far as we know.

If you are experiencing rotting of the
skin and/or body parts, you are certainly not a vampire - it is
most probably leprosy or flesh-eating bacteria, so go see a doctor
- immediately. Avoid playgrounds and public transportation.
Likewise, if you believe that you change into a raging canine under
the full moon then we suggest you go see a psychiatrist. Preferably
one who prescribes ample quantities of antipsychotic
medications.

If any of these symptoms imaginarily
happen to you while you are role-playing at Comic Con® then you
should be fine, so have a beer when you are done. You never know,
we might join you.

Table of
Contents for LIVES OF FUTURE-PAST

LIVES OF THE PROVECTUS
(Book Three)

Chapter 1 - Jennie and T
he
Hub

Chapter 24 - Battle of the
Blood

Chapter 25 - Liliana to the
Rescue

Welcome to the complete woks of THE VROL
TRILOGY in THE CHRONICLES OF MAX GUNNARSSON. For the reader's
convenience, a
style sheet
for this series is provided.

There are many instances where a character
is thinking to him or herself, and no one else. This is denoted in
italics,
without the use of quotation marks:

There is an ample amount of non-verbal or
non face-to-face communications going on in the book, either by
genetically facilitated telepathy, or by use of what is called a
"comm" – short for
communications device
. Sometimes the
communication is over a broadcast channel, where all with comms
hear, but many other times it is between two individuals, as users
can select private channels. Many (but not all) of these "comms"
are magic-enabled devices, and only function telepathically for
those of the enhanced genome, as well as for the Prīmulī in the
story. The type of device used is usually described.

These communications are in italics, as well
as quotation marks:

Also, at times "comm" will be used as a
verb

The reader will also encounter occasions
where the italicized part of a two-way conversation is merely the
voice of the unseen subject of what amounts to a telephone call,
with the visible, audible subject's voicing non-italicized.

"
Maria. Please, do not be alarmed. I have
accessed your communications device in order to speak with you. I
am a friend."

"Who is this?" she whispered, alarmed.

"Bewegen Sie sich nicht, wenn Sie leben
wollen [Do not move if you wish to live]."

However, if the foreign language uses
anything but Latin script (such as Greek, Cyrillic or Japanese),
then only the translation is displayed, encapsulated in
brackets.

"[Welcome to Tokyo, honored ones. I am to
assume you are of the Lycan bloodline]."

Not common in the series, but shown on
occasion, the text on a personal console, when displayed, will be
in a narrow, more dramatic serif font, in italics, but without
quotation marks.

Johnson: And you will not approach
Earth?

X'than'dor: We have no interest in Earth

Johnson: Excellent. I get Earth, and I will
give you Azul

X'than'dor: We shall take it anyway

Triple pound signs ( ### ) are used in
paragraph breaks to denote a substantial change in scenery or
location. There will also be times where a location/year will
appear instead of the pound signs.

Knowing this, I hope you enjoy the complete
VROL TRILOGY.

The planet known as Earth provides a
rich history, dissimilar from the billions upon billions of
inhabited worlds in the visible universe. While most cultures were
quickly discovered and nurtured throughout their difficult
beginnings by their older intergalactic brothers, Earth stood
alone, on the edge of Orion, a minor spiral arm of the Milky Way
Galaxy, watched by those of immense power who nearly always chose a
path of non-interference. These beings would analyze all from their
timeless dimension, known as The Hub, from which all time/space
emanated. They were patient, as they held the secrets of the
universe in their hands and had all eternity in which to
wait.

Man's beginnings were precarious, to
say the least, and with great anticipation his supervisors analyzed
his initial struggle for survival against extinction. From his
first steps of self-awareness, to kingdoms that spanned entire
continents, he constantly fought and battled to advance his own
cause.  He was truly a marvelous creation and had pleased his
invisible mentors immensely.  And although they chose to stay
out of sight and mind, leaving man to his own devices, they did
tinker a bit, providing some bloodlines with enhanced genetics to
see how he would fare.

Certain few men of
character learned to harness the energies that flowed within every
living
thing on their world - energies
that allowed them to care, heal and build. These men stood
above
and apart, and although small in
numbers, they spread out over the planet to become consultants to
leaders great and strong, offering advice, and sometimes even
prodding their lieges in the proper direction when darkness showed
its evil countenance.

There were also others who had superior
abilities, thanks to the watchers' thoughtful manipulations - the
noble lycans, created to be the soldiers of merit and honor,
faithfully defended Man's free spirit and his ability to mold the
world into one of greatness - so he might one day take his rightful
place among the myriad of ascended species in the
universe.

However, for every yin there is a yang,
and there were also those who craved the darkness, only kept in
check by the lycans, who contrasted them in nearly every manner.
Through natural selection, these lovers of death evolved to subsist
on the life waters of the innocent and to prey on the weak. Such
had become their way.

Over time these malcontents grew in
strength and numbers, and they disrupted the delicate balance of
light and dark on a world so young. So, the observers decided to
end their test, and determined that Man should not be able to touch
nature in such an intimate manner. They stripped Man of all of his
abilities - which faded into rumor, then legend, and then were
almost completely forgotten.

Man then did something that surprised
his watchers - he improvised. With his own mind and hands he
started to grasp upon the powers of the universe through the use of
technology. Iron turned to steel. Vacuum tubes turned to printed
circuit boards. As each discovery led to the next he continued
learning until he found quadrinium, buried deep in the planet,
waiting to be forged into usefulness.

Building strong, spacefaring ships of
quadrinium and peering through lenses that enabled him to see
distant parts of the galaxy, he set off for the stars, traveling
across the spiral arm to build a new world, and seeking to correct
the errors he had made during his short time on Earth. But nature
is as nature does, and he soon found himself facing evil of another
form - and of another part of the Milky Way. His minders, who had
sat for so many centuries watching in silence, again found it
necessary to re-enable the gifts so quickly taken from him in the
past.

But this time they would do so in small
steps, starting with a young man on a distant planet.

Chapter 1 - Jennie and T
he
Hub

A loud alarm clock sounded off at 0500
hours, prompting a delicate, copper-colored hand to reach over and
slap the snooze button. Five minutes later the alarm went off
again, and the same hand hit the snooze button, this time a bit
harder, but Jennie knew it was time to get up - it was ingrained
discipline.

Partially pulling her pillow from over
her head with a groan, she slowly opened one of her enormous,
cocoa-brown eyes, both of which were still surrounded by generous
amounts of smudged eyeliner she had declined to remove the night
before. Her going away party was epic, as well as the top-shelf
tequila she drank with a guy she liked a lot, so when she got back
to her apartment she walked over to her bed and fell into it like a
rock.

As she rubbed the sleep out of her eyes
(and smearing her eyeliner even more), she slid out of her bed,
tiredly squinting as she picked up and read a semi-transparent
paperscreen lying on her bedside table. It was addressed to Lt.
Jennifer Escalante. They were the detail on her new orders. As she
came out of her sleepy state, her eyes lit up - as much as they
could with a mild hangover. The big day arrived - the day of her
transfer to the Revolution, the newest, largest starship in her
planet's navy. She was going with her highest-ranking commanding
officer. Captain Bagatelle had been promoted to the rank of rear
admiral, and was taking her with him as he had done on all of his
previous transfers since she served under his command, which was
basically since she graduated from the military academy.