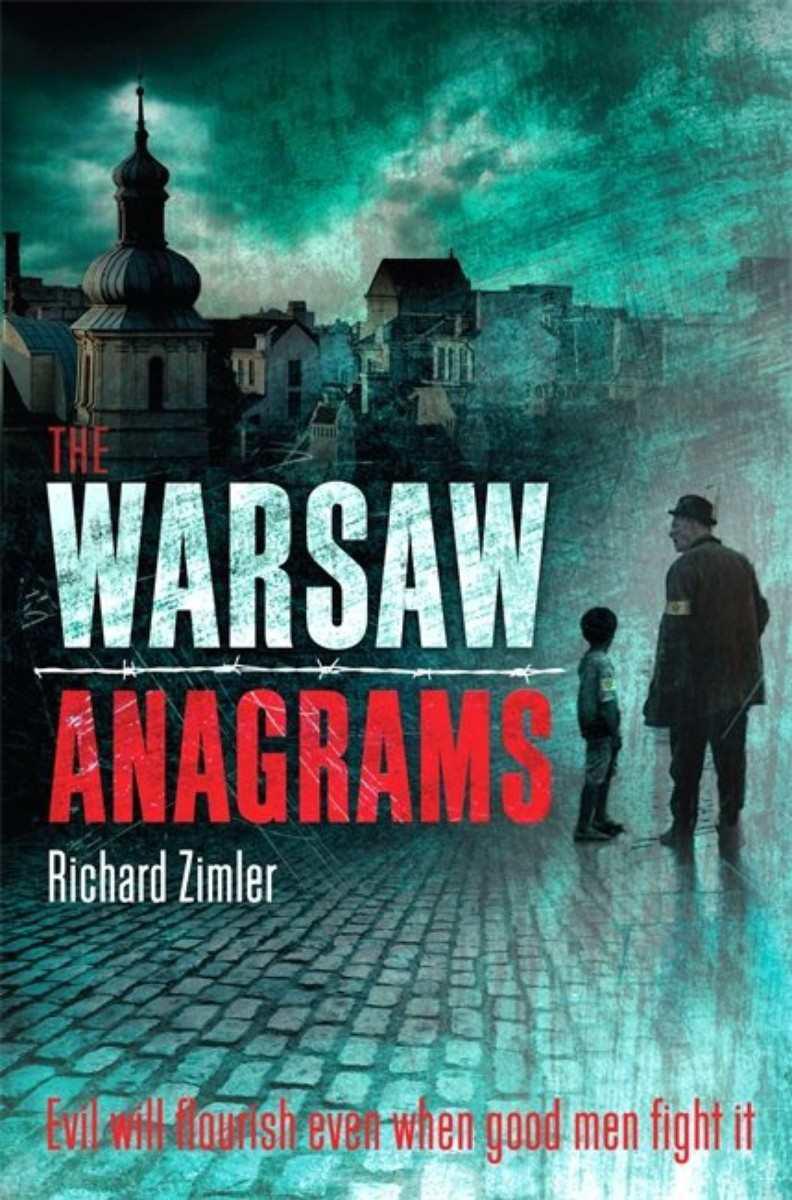 For all the members of the Zimler, Gutkind, Kalish and Rosencrantz families – my many granduncles, aunts and cousins – who perished in the ghettos and camps of Poland. And for Helena Zymler, who survived.

I am greatly indebted to Andreas Campomar and Cynthia Cannell for their unwavering support. I also want to thank Nicole Witt, Anna Jarota and Gloria Gutierrez for helping my books find homes in many different countries.

I am particularly grateful to Alexandre Quintanilha, Erika Abrams and Isabel Silva for reading the manuscript of this novel and giving me their invaluable comments. Many thanks, as well, to Thane L. Weiss and Shlomo Greschem.

A number of excellent books about the Jewish ghettos of Poland helped me in my research. Prominent among them are
The Diary of Mary Berg
and Emmanuel Ringelblum’s
Notes from the Warsaw Ghetto.

Erik Cohen’s original text for
The Warsaw Anagrams
was written in Yiddish, though he occasionally made use of Polish, German and English words. We have maintained a few foreign terms and expressions in this edition, where we believe that they help evoke the flavour of the original or clarify meaning. A glossary is included at the end of the book.

Cohen’s manuscript of
The Warsaw Anagrams
was discovered in 2008, under the floorboards of a small apartment in the Muranów district of Warsaw that had belonged to a survivor of the Jewish ghetto named Heniek Corben. According to neighbours, he had passed away in 1963 and left no descendants.

We owe uniqueness to our dead at the very least.

I’ve had a map of Warsaw in the soles of my feet since I was a young boy, so I made it nearly all the way home without any confusion or struggle.

Then I spotted the high brick wall around our island. My heart leapt in my chest, and impossible hope sent my thoughts scattering – though I knew that Stefa and Adam would not be home to welcome me.

Street. As soon as I slipped inside, a young man wearing a tweed cap drawn low over his forehead raced past me. The flour sack he’d hoisted over his shoulder dripped dots and dashes of liquid on his coat – Morse code in chicken blood, I guessed.

Men and women lumbered through the frigid streets, cracking the crusted ice with their worn-out shoes, their hands tucked deep inside their coat pockets, vapour bursts puffing from their mouths.

In my disquiet, I nearly stumbled over an old man who had frozen to death outside a small grocery. He wore only a soiled undershirt, and his bare knees – badly swollen – were drawn in protectively to his chest. His blood-crusted lips were bluish-grey, but his eyes were rimmed red, which gave me the impression that the last of his senses to depart our world had been his vision.

In the hallway of Stefa’s building, the olive-green wallpaper had peeled away from the plaster and was falling in sheets, revealing blotches of black mould. The flat itself was ice-cold; not a crumb of food in sight.

Underwear and shirts were scattered around the sitting room. They belonged to a man. I had the feeling that Bina and her mother were long gone.

Stefa’s sofa, dining table and piano had vanished – probably sold or broken up for kindling. Etched on the door to her bedroom were the pencil marks she and I had made to record Adam’s height every month. I eased my fingertip towards the highest one, from 15 February 1941, but I lost my courage at the very last second – I didn’t want to risk touching all that might have been.

Whoever slept now in my niece’s bed was a reader; my Polish translation of
A Midsummer Night’s Dream
was splayed open on the ground by the headboard. Next to the book was an empty tin cup that had been filled with ghetto water; on evaporating, the ochre crust I remembered well had been left behind.

Searching the apartment rekindled my sense of purpose, and I hoped that the world would touch me back now, but when I tried to open the door to Stefa’s wardrobe, my fingers eased into the dark wood as though into dense cold clay.

What did it mean to be nine years old and trapped on our forgotten island? A clue: Adam would wake with a start over our first weeks together, catapulted from night-terrors, and lean over me to reach for the glass of water I kept on my side table. Stirred by his wriggling, I’d lift the rim to his lips, but at first I resented his intrusions into my sleep. It was only after nearly a month together that I began to treasure the squirming feel of him and his breathless gulps, and how, on lying back down, he’d pull my arm around him. The gentle rise and fall of his slender chest would make me think of all I still had to be grateful for.

Lying in bed with my grandnephew, I used to force myself to stay awake because it didn’t seem fair how such a simple act as drawing in air could keep the boy in our world, and I needed to watch him closely, to lay my hand over his skullcap of blond hair and press my protection into him. I wanted staying alive to involve a much more complex process. For him – and for me, too. Then dying would be so much harder for us both.

Nearly all of my books were gone from the wooden shelves I’d built – burned for heating, no doubt. But Freud’s
The Interpretation of Dreams
and some of my other psychiatry texts were still there. Whoever was living here now had likely discovered that most of them were first editions and might fetch a good price outside the ghetto.

I spotted the German medical treatise into which I’d slipped two emergency matzos, but I made no attempt to retrieve them; although hunger still clawed at my belly, I no longer needed sustenance of that kind.

Eager for the comfort of a far-off horizon, I took the
apartment-house
stairs up to the roof and stepped gingerly on to the wooden platform the Tarnowskis – our neighbours – had built for stargazing. Around me, the city rose in fairytale spires, turrets and domes – a child’s fantasy come to life. As I turned in a circle, tenderness surged through me. Can one caress a city? To be the Vistula River and embrace Warsaw must be its own reward at times.

And yet Stefa’s neighbourhood seemed more dismal than I remembered it – the tenements further mired in shaggy decay and filth despite all our wire and glue.

A voice cut the air with a raucous shout, dispelling my daydreams. Across the street, leaning out a fourth-floor window, a shrivelled man in a tattered coat was waving at me frantically. His temples were sunken and his stubble was white.

‘Hey!’ he shouted. ‘You there, you’re going to fall and break your neck!’

I saw a reflection of myself in his shrunken shoulders and panicked gaze. I held up my hand to have him wait where he was, clambered off the roof and down the stairs, then padded across the street.

Up in his apartment, the man recognized that I wasn’t like him right away. He opened his bloodshot eyes wide with astonishment and took a step back. ‘Hello there,’ he said warily.

His face relaxed. ‘Absolutely. Though your edges …’ He jiggled his hand and tilted his head critically. ‘They’re not so good – a bit indistinct.’

‘Nah, I’ve had visions before. And besides, you speak Yiddish. Why would a Jewish
ibbur
do me any harm?’

‘A being like you – who’s come back from beyond the edge of the world.’

He had a poetic way with words, which pleased me. I smiled with relief; he could really see and hear me. And it eased my worries to have a name for what I was.

‘Erik Benjamin Cohen,’ I replied, introducing myself as I had as a schoolboy.

‘Are you from Warsaw?’ he asked.

‘Yes, I grew up near the centre of town, on Bednarska Street.’

Puckering his lips comically, he gave a low whistle. ‘Nice neighbourhood!’ he enthused, but when he flashed a grin I saw that his mouth was a ruin of rotted teeth.

Interpreting my grimace as a sign of physical pain, he came closer. ‘Sit, sit,
Reb Yid
,’ he told me in a concerned voice, pulling out a chair for me at his kitchen table.

Formality seemed a little absurd after all that we Jews had suffered. ‘Please just call me Erik,’ I told him.

I lowered myself in slow motion, fearing that I’d fail to find a solid seat, but the wood of his chair welcomed my bony bottom generously – proof that I was getting the knack of this new life.

Heniek looked me up and down, and his expression grew serious.

‘You faded away for a moment. I think maybe—’ Ending his sentence abruptly, he held his gnarled hand above my head and blessed me in Hebrew. ‘With any luck, that should do the trick,’ he told me cheerfully.

Realizing he was probably religious, I said, ‘I haven’t seen any sign of God, or anything resembling an angel or demon. No ghosts, no ghouls, no vampires – nothing.’ I didn’t want him to think I could answer any of his metaphysical questions.

Where I Lost Her by T. Greenwood
Deadly Dosage by Richards, Cheryl
Shine Not Burn by Elle Casey
Solace by Sierra Riley
Wizard at Work by Vivian Vande Velde
The Muscle Part One by Michelle St. James
River Magic by Martha Hix
Temple of the Jaguar by James, Aiden, Rain, J.R.
Fuego Errante by Guy Gavriel Kay
Black Ships by Jo Graham
Our partner