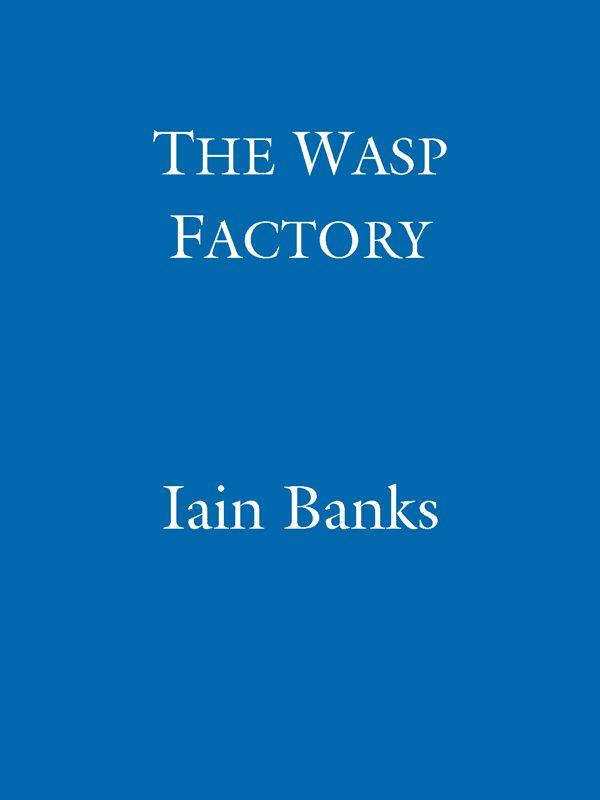 Table of Contents
About the Author
Title Page
Copyright Page
Dedication
Chapter 1 - The Sacrifice Poles
Chapter 2 - The Snake Park
Chapter 3 - In the Bunker
Chapter 4 - The Bomb Circle
Chapter 5 - A Bunch of Flowers
Chapter 6 - The Skull Grounds
Chapter 7 - Space Invaders
Chapter 8 - The Wasp Factory
Chapter 9 - What Happened to Eric
Chapter 10 - Running Dog
Chapter 11 - The Prodigal
Chapter 12 - What Happened to Me
Iain Banks sprang to widespread and controversial public notice with the publication of his first novel,
The Wasp Factory
, in 1984. Since then he has gained enormous and popular critical acclaim with further works of both fiction and science fiction, all of which are available in either Abacus or Orbit paperbacks. In 1993 he was acknowledged as one of the Best of Young British Writers. In 1996 his number one bestseller,
The Crow Road
was adapted for television.
The Times
has acclaimed Iain Banks ‘the most imaginative British novelist of his generation’.
Iain Banks lives in Fife, Scotland
By Iain Banks
THE WASP FACTORY
WALKING ON GLASS
THE BRIDGE
ESPEDAIR STREET
CANAL DREAMS
THE CROW ROAD
COMPLICITY
WHIT
A SONG OF STONE
THE BUSINESS
DEAD AIR
THE STEEP APPROACH TO GARBADALE

And as Iain M. Banks
CONSIDER PHLEBAS
THE PLAYER OF GAMES
USE OF WEAPONS
THE STATE OF THE ART
AGAINST A DARK BACKGROUND
FEERSUM ENDJINN
EXCESSION
INVERSIONS
LOOK TO WINDWARD
THE ALGEBRAIST
MATTER

Hachette Digital
www.littlebrown.co.uk
Published by Hachette Digital 2008
Copyright © Iain Banks 1984
All rights reserved.
No part of this publication may be reproduced,
stored in a retrieval system, or transmitted, in any
form or by any means, without the prior
permission in writing of the publisher, nor be
otherwise circulated in any form of binding or
cover other than that in which it is published and
without a similar condition including this
condition being imposed on the subsequent purchaser.
All characters in this publication are fictitious
and any resemblance to real persons, living or dead,
is purely coincidental.

Whimper by McFadden, Erin
John Carter by Stuart Moore
Keeping Mr. Right Now: A Kisses in the Sand Novel (Entangled Bliss) by Robin Bielman
Hard Time (Hard as Nails #1) by Hope Conrad
The Good Life by Gordon Merrick
Fail Up by Tavis Smiley
Because of a Girl by Janice Kay Johnson
El Legado by Katherine Webb
Out of the Grave: A Dark Fantasy (The Shedim Rebellion Book 2) by Burke Fitzpatrick
Craft by Lynnie Purcell
Our partner