Read The Way to a Woman's Heart Online

The Way to a Woman's Heart 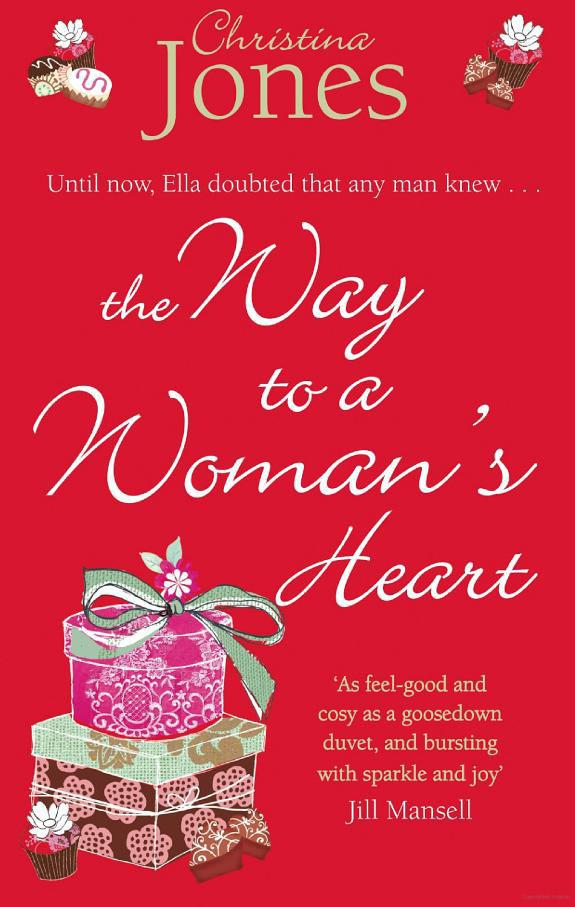 For The Mandalay Bay Table:

With a million thanks for being the best friends anyone could ever have and for being there and making 11 April 2009 even more special.

With deepest gratitude to all at Piatkus, my publishers, especially Emma Beswetherick and Donna Condon.

And with loads of love and thanks to Broo Doherty, my agent, for being brilliant.

And special posthumous thanks to my grandmothers who left me the recipes.

‘Please, please, please…’ Ella Maloney implored the straw-chewing gods of all-things-rural as she squinted at the signpost. ‘Please, let this be the right one. P-l-e-a-s-e don’t let this one be another dead end.’

Having slowed the car to a halt and pushed her sunglasses into her newly done salon-smooth cinnamon-and-honey hair in order to read the faint lettering, Ella actually wasn’t holding out a lot of hope.

After already experiencing several false starts and a few serious dead ends – once teetering on the edge of a duckpond and twice sailing straight into someone’s garden – there was absolutely nothing to indicate that this particular
crossroads and signpost combination would be any more help than any of the others.

So there was no point in getting over-optimistic, Ella thought, blinking through the blinding dazzle of a perfect May morning, because this one wasn’t going to be the right one either, was it?

But… Hallelujah – yes! It was!

And there they were…

The faded names that would, hopefully, change her life. ‘Yes, yes, yeeeesss!’ Drumming triumphantly on the steering wheel and doing a little happy dance with her feet beneath the pedals, Ella held her own small in-car celebration-for-one. ‘At last!’

The drowsy names sounded like enchanted fairy-tale places. Ella could already feel the tension and tiredness simply seeping away.

‘Yay!’ Ella blew an extravagant double-handed kiss at the lopsided signpost whose delightful destinations were almost completely obscured by burgeoning shepherd’s purse and convolvulus. ‘I’ve really, really made it!’

She’d been playing a solo version of ‘are we nearly there yet?’ for the last thirty miles. Having ignored the sat nav because both her route and her pre-programmed target seemed to be causing it some confusion, Ella now embraced the appearance of the ancient signpost with as much enthusiasm as a weary lone explorer suddenly stumbling across friendly human civilisation.

Not, she thought, that her journey from North London to Berkshire could be remotely compared with a Ranulph Fiennes trek, but for a committed townie like her, it had been a pretty testing couple of hours.

There had been more than a few times while driving through the green and golden countryside on this gloriously bosky May morning, when she’d begun to wonder if her destination even existed.

Hideaway Farm, she’d been told in one of Poll Andrews’ letters – real letters, not texts or emails – was halfway between the exquisitely named Lovers Knot and Fiddlesticks. Not actually in either village though, and if she reached Hazy Hassocks she’d have gone far too far.

The farm was, Poll had said, signposted at the end of Cattle Drovers Passage – if the sign hadn’t fallen down as it was apparently wont to do – and then she just had to drive along Hideaway Lane, round its various twists and turns, until she found the farmhouse at the end.

If in doubt, Ella should ask anyone she met for directions. Everyone local, Poll’s letters had assured her, knew the way to Hideaway Farm.

Hideaway Farm… Ella had giggled delightedly to herself. How magical was that? The name alone conjured up memories of childhood storybooks and tales of wild, free madcap adventures in a rustic paradise.

Hideaway Farm – yes, she could just see it – all haystacks, and lazily droning tractors, and grazing, er, sheep? Or maybe cows? And pigs? Ella was a bit hazy on the sort of animals that might inhabit Hideaway Farm. But she was sure there’d
be smiling apple-cheeked women and beaming suntanned men and happy bare-footed children scampering through dappled buttercup and daisy meadows.

It was all going to be absolutely perfect.

Earlier, when she hadn’t seen a human being for at least fifteen minutes, and for ages had been scarily surrounded by nothing but fields and trees and a big, big sky, Ella had become a little concerned, but not now. This was the countryside for heaven’s sake, what else could she expect?

And then there had been a bit of a problem with everything being so
green
. Well, apart from the huge expanse of sky, of course. And that was the most unbelievable blue. Far bluer than the sky she’d left behind in London. And there was so much more of it somehow. To be honest, the size of the sky and the mass of greenery had all become a little bit overwhelming.

But now, Ella beamed again at the signpost, it was going to be all right.

How fantastically relaxing it must be, living in villages with these sleepy, bucolic names, and having neighbours who probably still danced round maypoles, and had probably never even seen a spreadsheet, or heard of an iPod nano, and who thought Gok Wan was a small Indonesian island.

No doubt about it now. Abandoning her going-nowhere life, chucking up her city job before she became burned out at twenty-seven, and answering Poll Andrews’ advert for help in one of those posh magazines that were always filled with things like ‘Lady Hermione Pugsley-Grossbody seeks live-in companion. Must be able to drive, speak fluent
Mandarin and emote with llamas’
had
been the right choice – whatever Mark had said to the contrary.

Mark… Ella shook her head. No, she wouldn’t think about Mark. Not yet. After all, she wouldn’t be doing this at all if it hadn’t been for Mark, would she? And if she thought too much about Mark now, she might just give up and turn around and scoot back to London which would solve absolutely nothing… No, she was going to stick to her guns…

Determinedly, Ella replaced her sunglasses, started the car, and headed in the direction of Fiddlesticks and Lovers Knot. Anyway, after all the upsets and arguments of the last few weeks, Hideaway Farm was going to be heaven on earth. She just knew it.

Ten minutes later and hopelessly lost in yet another maze of tangled lanes and deserted sleepy cottages and single-track roads leading to nowhere, the euphoria was a thing of the past and Ella began to wish she’d never heard of Hideaway Farm.

Somewhere between the turning for Fiddlesticks and the fork to Lovers Knot she’d lost her bearings. Again. Ask someone for directions, Poll Andrews had said. Hah! Like who for instance? Chance would be a fine thing…

Hereward by James Wilde
The Truth by Erin McCauley
Ghostly Images by Peter Townsend
A Measure of Mercy by Lauraine Snelling
Restless Heart by Emma Lang
Running on the Cracks by Julia Donaldson
Since Forever Ago by Olivia Besse
Lavondyss (Mythago Cycle) by Robert Holdstock
Voices in the Dark by Lacey Savage
The Walking Dead: The Fall of the Governor (The Walking Dead Series) by Kirkman, Robert, Bonansinga, Jay
Our partner