Read The Weak and The Damned Online

The Weak and The Damned 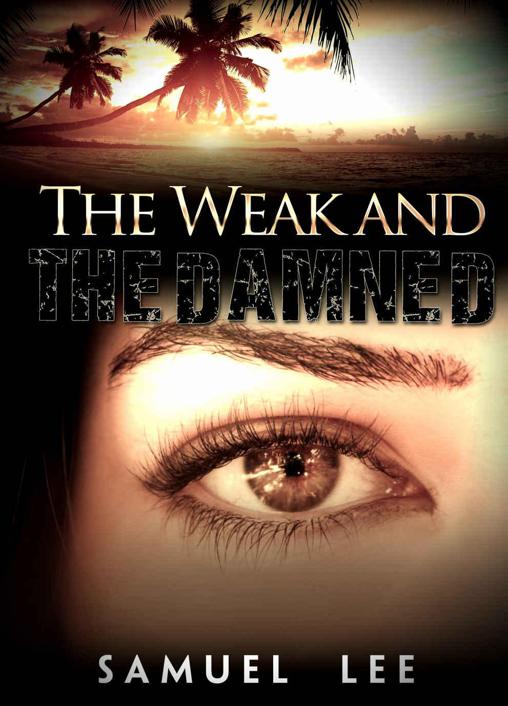 The Weak
and The Damned

No part of this
book may be reproduced in any form or by any electronic or mechanical
means including information storage and retrieval systems, without
permission in writing from the author. The only exception is by a
reviewer, who may quote short excerpts in a review.

This book is a
work of fiction. Names, characters, places, and incidents either are
products of the author’s imagination or are used fictitiously.
Any resemblance to actual persons, living or dead, events, or locales
is entirely coincidental.

The
Weak and The Damned

The sun-baked white
sands of the Florida gulf coast seemed endless, spreading for miles
as far as the naked eye could see.

On the surface, the
coast seemed peaceful and unblemished by the umbrellas, folding
chairs, or other clutter commonly found on such beaches. The hot
landscape was scoured clean by salty sea breezes and barely disturbed
by the activity of a small beachfront community.

The community's
gated entrance was reinforced with concrete road blocks and stalled
vehicles.  Each approach was carefully guarded with constant
patrols sweeping the streets and alleyways between the homes.

One
of the spacious villas housed Captain William M. Lawson, his
belongings, and until recently his young mistress.  Lounging on
the villa's large back sundeck with a few view of the clear blue
water Captain Lawson appeared deceptively relaxed. In reality, the
tall, heavily muscled, battle-hardened soldier was intensely aware of
his surroundings.

Every few moments
his hand absently caressed the rifle that leaned against the side of
his deck chair. The sound of approaching footsteps brought William to
his feet before his aide, a 16 year old recruit, could speak.

"Captain!"
Second Lieutenant Gardner barked as he saluted crisply and waited
while William sketched his own returning salute. "Our scouts
found a survivor in the town and we thought you would want to
interview her right away, sir."

"Bring
her here” William kept his voice cool and disinterested, but he
felt a smile tugging at the corners of his mouth. Once Gardner
saluted and left William gathered his rifle along with the maps he'd
been analysing. For the past few months the quasi-military group
William controlled had encountered very few survivors.

Tired of the current
group of women under his control William was looking forward to an
encounter with someone new. He found himself hoping for one who was
young and attractive, but the Captain was sure he would enjoy himself
regardless of the age or looks of the female in question. William
Lawson prided himself on his versatility.

Striding
past his anxious aide and personal guards William walked to the
villa's luxurious master bedroom firmly closing the door behind him.
After pouring himself a small glass of bourbon, the scouts had
recently brought to camp

William sat down in
a large chair to wait for Gardner and the new female.

It was always easier
to have the new women brought directly to his personal quarters. They
had no time to learn what to expect from the other women, and William
preferred it when they were shocked and frightened. Something about
seeing the look of relief and hope slowly melt away when the woman
realized why the Captain wanted to see her alone always delighted
William.

Since
the Crisis began William had lived out most, if not all, of his
fantasies. In his youth, William had always enjoyed pushing women to
their limits and, if he could get away with it, past them.

His own personal
preference for forceful sexual encounters was ultimately what caused
him to join the military.
That bitch just couldn't keep her mouth
shut, could she?
William thought bitterly as he remembered the 17
year old girl whose father had threatened to call the cops after his
daughter came to him crying about her date with William.

The immediate result
of that little slip up, was William's parents paying the girl's
family a nice sum of hush money while William himself joined the
Army.

Once
the plague that was commonly known as the Crisis began William went
from a forgettable United States Army enlisted man to a rapidly
promoted Captain as his superior officers died or were killed.

What began as a
seriously virulent airborne illness quickly became a bloodbath as
those who didn't simply die became violent, undead cannibalistic
monsters that were driven to spread the virus through blood and
saliva contact.

Since most people
refused to believe that the reports of actual, honest to god, zombies
attacking citizens the population was soon overwhelmed as basic
communication broke down. By the time the remaining healthy
individuals attempted to organize a resistance it was too late.

The
resulting chaos had given William, and other survivors, free reign to
indulge in any secret desire they had ever entertained with no
consequences. What was left of the military high command took little
notice of personnel slipping away or terrorizing the civilian
population. However, after briefly enjoying the unrestrained freedom
the cool hand of reason forced William to think of the future.

If he and those
around him continued on with no mission or structure they would soon
find themselves slouching and groaning with the rest of zombie horde.

William
was able to organize the surviving soldiers under his command into an
impressive fighting force, but as the chain of command continued to
crumble he found himself struggling to stay in power.

Since fighting for
control of his men while simultaneously battling zombie like
creatures was not an option,William came up with an elaborate piece
of fiction.

In addition to
promoting him to Captain, William claimed that his units now dead
commanding officer had told him the location of the defunct military
base that was stocked with supplies.

The
lie kept him relatively safe, and the chaotic landscape of what
remained of the United States made travel difficult.

When William
insisted on remaining at a fortified location for several months to
rest and gather supplies most were too exhausted by the difficult
journey to question the delays. Plus the women, their "dependents"
kept even the most sceptical soldier relatively docile.

It
took only a couple of months for everyone in William's command to
realize that uninfected, airborne virus immune, women were extremely
scarce.

Understanding that
the promise of salvation in the form of a mythical military base
would be unappealing if it was populated only by male soldiers,
William had ordered his men to bring all survivors they encountered
into camp using force if necessary.

Any man who seemed
useful became a recruit or was classified a skilled civilian while
the women and children were classified as dependents and sent to live
in separate quarters.

Access
to the women was severely limited and William was determined to keep
things that way. The women kept the civilian physicians,
electricians, and other specialist docile while encouraging the
soldiers to remain obedient in the hopes of spending what was now
called “recreation time” with one of the more
accommodating women.

William rewarded his
officers with a woman of their own who could be brought to their
private rooms whenever the officer was off duty. He himself had
indulged in this luxury after his nomadic community stumbled upon
Angel.

At
18 years old, Angel was a tall statuesque blonde with startling black
eyes and a light-hearted vivacious personality that had seemingly
endured the end of modern civilization.

Found with a man who
claimed to be her father, Angel later admitted he was another
survivor who had found Angel shortly after their town was overrun by
the living dead. Not content with raping her, the man had forced
Angel to act out a perverse, never ending, fantasy with him that left
William wondering if the man once had children of his own whose only
escape was death in its more permanent form.

Unskilled and nearly
hysterical at the loss of Angel, the man whose name William had not
bothered to learn was quickly put to death.

William
himself had enjoyed several months of Angel's gratitude and
deliciously inventive mind. She was willing to act out all of the
sadomasochistic scenarios that William preferred, and William enjoyed
the novelty of having a woman in his bed who was not constantly
crying.

Even though the 6'4"
man with his light brown hair, vivid blue eyes, a physique made
muscular by months of constant travel, strict rations, and hard
fighting was considered sexually appealing by most; the majority of
female dependents viewed sex as a duty rather than a pleasure.

Angel's eagerness
and obvious willingness were a welcome change for William.

It
was only after Angel became pregnant that William's unorthodox
post-apocalyptic romance began to unravel. The girl, previously
always eager to spend time with William, began refusing to leave the
dependent quarters.

When she did join
William in his private rooms or tent she was so uncharacteristically
docile in his bed that William soon stopped sending for her
altogether.

He assumed her
change was brought about by her pregnancy and began sending for one
of the other women when his physical needs became a distraction.

Only
later did he learn that Angel was carrying on an affair with one of
the guards assigned to the dependent quarters. The guard confessed
that the reason Angel was so eager to come to William's bed and stay
his favourite was because it granted her more freedom and less
supervision than the other women.

Convinced the child
was his, the young guard was determined to run away with Angel. The
plan was eventually discovered and William, enraged and embarrassed,
had the man crucified in full view of the hotel that was serving as
dependents quarters at the time. Angel remained with the dependents
since, regardless of how furious William was, he could not afford to
kill a pregnant woman.

Though
William knew that some unauthorized assignations took place between
the women and the men he chose not to interfere. Most of the women
understood it was better for them and their children to accommodate
the men, and the men knew things were easier if they didn't attempt
to get too rough with the women.

William understood
that it was best to let some rule breaking go unpunished, but after
Angel the idea of having a woman in his bed whose thighs had parted a
thousand times by the command of his men turned his stomach.