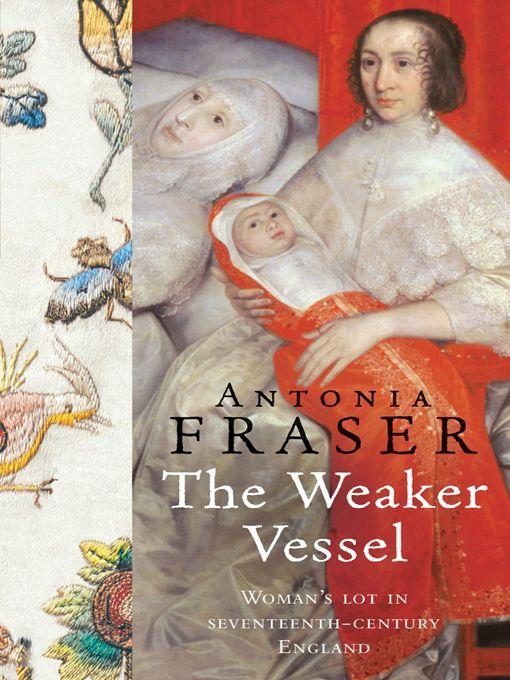 PART ONE:
As It Was – This Blessed Knot

1 A Wife Sought for Wealth

3 Crown to her Husband

4 The Pain and the Peril

9 Courage above her Sex

12 Sharing in the Commonwealth

15 Divorce from Bed and Board

19 The Delight of Business

Cromwell: Our Chief of Men

King James VI of Scotland, I of England

The Six Wives of Henry VIII

The Gunpowder Plot: Terror and Faith in 1605

Antonia Fraser is the author of many widely acclaimed historical works including the biographies
King Charles II
, the recently republished
Mary Queen of Scots
and
Marie Antoinette: The Journey
which won the Franco-British Literary Prize in 2001 and was made into a film by Sofia Coppola in 2006. Most recently she has published
Love and Louis XIV: The Women in the Life of the Sun King
.

Antonia Fraser won a Wolfson History Prize in 1984, was made CBE in 1999, and was awarded the Norton Medlicott Medal by the Historical Association in 2000. She lives in London and has six children and eighteen grandchildren.

The housewife and the hunter

The title page of
The Needles Excellency

A witch and her imps (British Library)

Lady Bankes’s monument (by permission of the Vicar of Ruislip; photograph by Behram Kapadia)

Lucy Hutchinson (from a private collection)

Fishwife (reproduced by courtesy of the Guildhall Library, London)

Oliver Cromwell at the age of fifty (courtesy of Sotheby’s)

Lady Isabella Thynne (by permission of the Marquess of Bath; photograph by courtesy of the Courtauld Institute of Art)

Peg Hughes (The Earl of Jersey)

A London courtesan (The Museum of London)

Illustration from the
The Midwives Book
(British Library)

Medal commemorating the birth of Prince James in 1689 (Cyril Humphris; photograph by courtesy of Spink and Son Ltd)

‘
Were
there any women in seventeenth-century England?’ This question was put to me by a distinguished person (male) when I told him the proposed subject of my new book; like another jesting interlocutor, he did not stay for an answer, but vanished up the steps of his club. This book is in part at least an attempt to answer that question.

Wherever possible I have quoted the voices of women themselves, in letters, in the few but poignant diaries, and in the reports of others. Obviously there are enormous difficulties with the written record where women of this period are concerned, in view of the fact that the vast majority below the gentry class were, through no fault of their own, illiterate. Nevertheless I have battled to breach the walls of this artificial silence. Indeed, if I have had a bias, it has been towards the unknown rather than the known; believing strongly in what we owe to ‘the number who lived faithfully a hidden life, and rest in unvisited tombs’, in the words of George Eliot’s moving conclusion to
Middlemarch
.

The idea of writing such a book first came to me in 1970 when I was working on a biography of Oliver Cromwell; it occurred to me that a study of women in the English Civil War would produce some interesting results, in view of the spirited nature of
the women in question, whether petitioning, defending castles or fighting alongside their husbands – a variety of activities, none of them particularly passive. Working on a life of Charles II, following these women through to the next generation, did nothing to diminish my ardour, but did show me how much more complicated the subject was than I had supposed.

After ten years of working on the seventeenth century I felt more enthusiasm than ever. But I did come to the conclusion that I must confine my study to England alone; although I had at an early stage wistfully contemplated including Scottish women, until the many differences in the laws as well as the society of the two nations convinced me that this was a separate subject. I also realized how important it was to take the hundred odd years from the death of Queen Elizabeth I to the accession of Queen Anne as a whole, if only to explore to what extent woman’s position in society did or did not improve with the passage of time.

Lanie's Lessons by Maddie Taylor
Online Lovers by Sheila Rose
04-Mothers of the Disappeared by Russel D. McLean
All In (Cedar Mountain University #2) by Ann Garner
Lives We Lost,The by Megan Crewe
Daughter of Necessity by Marie Brennan
Lord of the Dark by Dawn Thompson
DarkStar Running (Living on the Run Book 2) by Ben Patterson
Neighborhood Watch: The Adventures of Dick Ryder by Candy Nytes
Killian (The Sons of Dusty Walker Book 3) by Holt, Desiree
Our partner