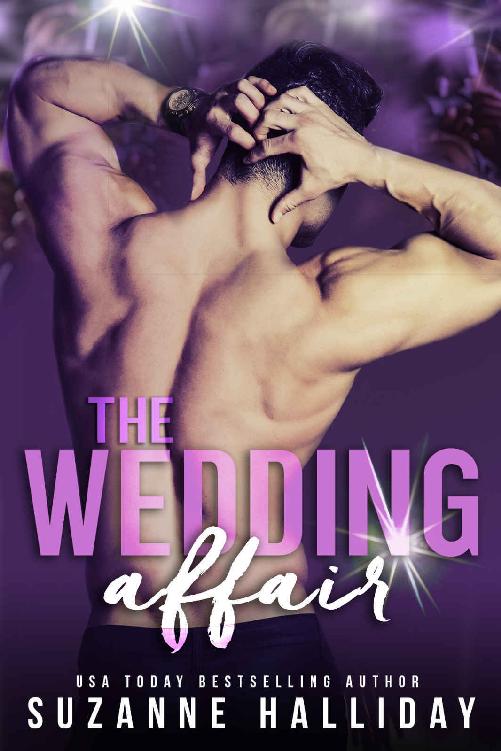 Looking for a sweet and fun happily ever after recipe?

Take one tropical paradise with a weeklong bridal party escape

Add a BFF doing Maid-of-Honor duties and a Best Man with a billboard past. Toss in a pinch of real-life drama topped with an outrageously funny family of in-laws and enjoy!

Samantha Evers ~ Maid-of-Honor extraordinaire and loyal friend in the midst of a life crisis. In Hawaii, while her job hangs in the balance, she tried to leave her problems behind to focus on her best friend’s wedding.

Ryan Sommerfield ~befuddled Best Man and cousin to the groom. Despite his man candy modeling past, these days he’s a successful graphics design businessman. The last thing he expected was to meet a girl who turned his life upside down.

What could go wrong when two strangers get thrown together in paradise? Especially when the bride and groom are happily matchmaking behind-the-scenes?

Instant attraction is one thing, but the idea of a wedding affair left both of them cold. It didn’t stop sparks from flying as the attraction gave way to real friendship.

A future together seemed out of reach since Ryan lived in Florida and Sam was in Hollywood, but sometimes all it takes is a leap of faith and a little nudge to change everything.

This ebook is licensed for your personal enjoyment only

All Rights Reserved. No part of this book may be reproduced or transmitted in any form or by an means, electronic or mechanical, including photocopying, recording, or by any information storage and retrieval system without the written permission of the author, except where permitted by law.

This book is meant for mature readers who are 18+.

~Happily Ever After Guaranteed~

M
aybe playing a game of
Where Am I
wasn’t such a grand idea. Especially when the participants were all lit like downtown Dallas—the result of several margaritas and far too many fire-breathing tequila shots.

Welcome to modern day bridesmaid hell. The originator of inappropriate everything. From what they all wore to how much everyone drank, it seemed to Samantha as though setting half a dozen out-of-control females loose on an all-expenses paid week of pampering—crammed with manic excitement and a propensity for debauchery—was a guarantee of trouble.

She looked at her friend, her oldest friend, and nearly fell over laughing at the sight she made.

She and Andrea,
do-not-call-me-Ann
, Frank had been BFFs since grade school. Anytime Sam had ever been in trouble, Andrea was somewhere in the picture. Same for applause. If she won the science fair, it was her best friend hovering right outside the frame.

The current day version of her friend was what brought this weird little group to Kauai in the first place. These days Andrea was a kick-ass designer specializing in high-end corporate interiors. It was, she said, great money and creatively satisfying. Along the way, while designing a well-hyped clubhouse at a newly launched private golf course, she had met and fallen stupidly, gob-smacked in love with Kyle Sommerfield.

And who the hell was Kyle Sommerfield? According to a slew of sports writers and magazine stories, he was a serious golfer on the pro circuit whose model good looks and easy down-home-boy charm made him a favorite with the golfing crowd.

One year and an enormous diamond engagement ring later, the two were about to marry in an outdoor Hawaiian-themed ceremony at a fancy hotel spa with a world-class golf course because,
Of course
, Sam snickered to herself.

Sam laughed with everyone else who tsk’ed and turned shaming hisses and boos on the poor girl who played
Where Am I
about as well as a guy taking an emotions quiz.

Kelly Johnson threw up her hands and chuckled. “C’mon, you guys! Cut it out. Give a cowgirl a break.”

“It smells like bullshit?” Tara Donner quipped, her head shaking in disbelief at the clever clue.

“Well, it would,” Kelly insisted with a slight slur to her words.

“Ladies, ladies,” Lisa Kerry cut in. Sliding off her stool, she stood, wobbled, and flamboyantly tossed her hair over a shoulder as she smirked. “Ignore Denim Debbie.”

“Hush, you,” Lisa sniped. “This is serious. The score stands tied.” She shot some margarita side-shade Kelly’s way. “This awesome championship trophy is at stake. It’s all on you now, Sam. This one’s for the win. Give us your best
Where Am I
.”

Holding up a garishly decorated, hollowed out coconut for everyone to see, she waved the sequin and crystal studded drinking vessel as if it were the Holy Grail, and a hushed reverence descended upon the inebriated group.

Andi’s cousin Julie, the creator of the grail vessel, started giggling. “Can you see the little penises I drew with puffy paint?” Pointing at a decorated circlet near the bottom of the coconut, she was sniffling and tearing up with laughter when she carefully enunciated, in a way only drunk women can, “That one? That’s my Joe. Lists slightly to the right.”

The bride found this statement hilariously funny and started screaming with laughter. “Oh, my god! Stop!”

Sam glanced around at the amused group of women. She had to hand it to her oldest friend for being the glue that held such a wildly disparate group of individuals together.

Kelly, the Midwestern girl Andi roomed with in college, became a friend and ally to all of them.

Lisa, the suburban mom with a devilish sense of inappropriate humor, was their longtime deputy from the neighborhood where they all grew up. Lisa had a knack for talking their way out of every imaginable situation.

Tara. What could she say about Tara? Smart and hungry,—a winning combination in today’s business world—she was one of those perfect specimens who sometimes made their mere mortal female friends wince. If there was a single wrinkle or imperfection on her flawlessly sculpted and maintained face, well. . .good luck finding it. She was Andrea’s partner in the design firm they’d started together when they were only twenty-five. Five years later, they were successful and positioned for a great future.

Sam was ambivalent about Tara. For a long time, she’d been put out by how close the two women were but had no reason to be so touchy. Living on either side of the country meant the three thousand miles and multiple time zones separating their daily lives put a strain on their closeness. But that didn’t mean they weren’t, simply put, in each other’s DNA. Tara was a fact. Andrea and Sam were sisters by design. Big difference.

And then there was Julie, the sweet, uncomplicated airhead who was always befuddled. As Andrea’s only girl cousin and the same age as they were, she had been a near-constant fixture in their lives growing up. Julie was everyone’s best friend and would defend any cause or person she felt was being treated harshly.

Five pairs of eyes were trained on her although Sam wasn’t sure how focused some of those eyes were.

When she went to shimmy off her stool, heat and sweat made her bare thighs stick to the painted wood. Standing up gracefully instantly became something of a joke. Landing awkwardly and slightly off balance, Sam was glad she’d decided on flat sandals instead of the high wedges she’s almost worn. There were plenty of things that went together well. Tequila and heels of any sort were not on the list.

Running a hand across her butt, she smoothed the plain gray skirt down her thighs and chewed on her lip as she frantically searched her alcohol-impaired brain for help.

Wait a minute! Wait a minute. I think I have one
, she thought as her soft snicker wafted on the sultry tropical night air.

“There are too many cars,” she began.

The same answers rang out. Only, this time, they were spoken with sardonic bite.

Andrea laughed heartily. “Seriously? If it wasn’t Paris or New York the first time, why say it again?”

Tara flipped her the bird while Kelly blushed, ducked her head, and chortled. “Oops. My bad.”

“Duck lips are the norm.”

Julie snicker-snorted. “Any High School U.S.A.” She giggled, her eyes lit with humor.

Sam laughed at the bull’s-eye and joined a group high five.

“Come on, come on,” Lisa urged. She was waving her hand for Sam to finish.

Glancing at the ceiling for a second, she considered her final clue and smacked her hands together when the perfect tip-off appeared.

Pointedly looking in everyone’s direction, she amped up the expectation with a snarky sneer and caustically growled, “The breakfast menu includes a side of smog.”

At the exact same time, Tara barked, “City of Angels.”

Judging by the cross expressions, not everyone had a warm place in their hearts for her stomping grounds, which was okay by her. There were already too goddamn many people crammed into four hundred and some odd square miles as it was.

Slope of Love (Love in Bloom: The Remingtons) by Melissa Foster
The Chronicles of Marr-nia (Short Stories Starring Barbara Marr) by Cantwell, Karen
Poison Penmanship: The Gentle Art of Muckraking by Jessica Mitford
Unleashed #4 by Callie Harper
Class Reunion by Linda Hill
The Good Daughter: A Memoir of My Mother's Hidden Life by Darznik, Jasmin
The Lie and the Lady by Kate Noble
His Secrets - Episode 1 by Corbin, GL
Once Taken by Blake Pierce
Trouble by Sasha Whte
Our partner