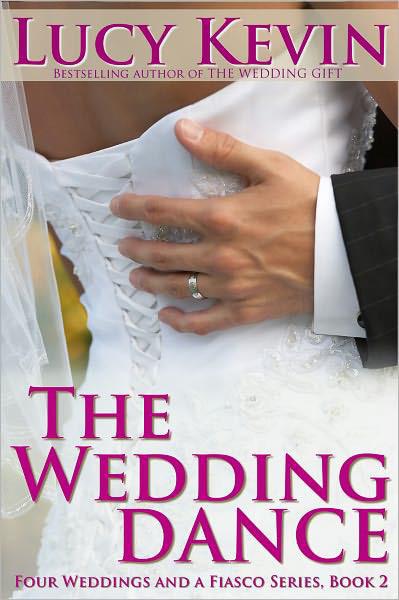 Book #2 in the Four Weddings and a Fiasco series

Phoebe, the Rose Chalet’s florist, knows nothing is permanent—not the floral arrangements she creates, not the weddings she helps produce, and certainly not her parents’ marriage which ended in a bitter divorce. Certain that all relationships come with strings attached, she has always worked to live for the moment and not to have any ties…ever.

Risking big is how Patrick left the family landscaping business, was the first Knight to graduate from college, and became an in demand architect. In California for a short while to work on a new home, from the very first moment he holds Phoebe in his arms, he knows he’s found his perfect match in the adventurous, alluring and intelligent florist.

But will Phoebe dare let herself risk her heart on the most fragile and precious bloom of all? Especially when one dance with Patrick Knight is all it takes for her to start rethinking everything she’s ever believed to be true about love…

Phoebe Davis made her way around the Rose Chalet’s main hall, helping to tidy away the remains of the previous day’s wedding. The flowers in particular, while so spectacular on the day of the wedding, always made such a mess afterwards. Case in point: the white roses at the tables were wilting, with a few already dead. She collected the stems in a garbage bag, careful not to prick herself on the thorns.

RJ, the Rose Chalet’s handyman/gardener, was working to disassemble the indoor gazebo, his shirt rolled up to the elbows as he lifted a heavy piece of wood. Rose, the chalet’s owner, was helping him, her deep red hair tied back so that it wouldn’t get in the way. Every so often RJ would ‘borrow’ the tool that she was using and put it back slightly too high for her to reach, which had so far led to at least three mock threats from Rose to fire him that morning.

“You wouldn’t fire me,” RJ shot back. “At least not with so much still to do.”

And not
, Phoebe added in the privacy of her head,
when that would mean getting rid of one of the best looking guys here
.

Not that RJ was the only good looking man on the premises. Tyce, who handled the music for the weddings, was busy packing up his amplifiers and winding up the cables to put them away. He looked a bit of a wreck this morning, even by standards that normally featured a couple of days of stubble along with artfully disorganized hair.

“The rock and roll lifestyle getting to you, Tyce?” Phoebe joked.

Tyce shrugged, his black T-shirt exposing a few of the tattoos on his upper arms. “What can I say? Some of us know how to party.”

“And some of us know how to handle mornings after,” Phoebe shot back with a playful smile.

“You must not be having enough fun. I’ll show you how it’s really done sometime.”

Phoebe simply laughed at the invitation. They all knew co-workers were off the menu. And she’d never looked at either RJ or Tyce in that way. Rose had hired another new temporary caterer none of them had met yet, but Phoebe knew better than to ever mix work and play.

“Would you two focus please?” Rose said, but it was clear from her fond tone that she was enjoying their banter. “RJ has to get out of here soon to go look over the site for the house Donovan and I are building, and the architect will be here any minute.”

“I hope so,” Rose said. “It’s just that the house…well, it’s such a big deal for me.” She flushed. “I mean, for us. For Donovan and me.” She turned to smile at RJ. “I’m really glad you agreed to help with the landscaping.”

“Sure, no problem,” RJ said, but from the way his entire body language changed at the mention of Rose’s fiancée, to Phoebe’s eyes it looked like there
was
a problem for RJ. A big one.

Phoebe continued to pick up and discard the wilted flowers. Every time she did this, she couldn’t help but think that there was so much waste for something that statistically wouldn’t even last.

Still, she knew just how lucky she was to get to work with flowers every day. She’d loved gardens and blooms ever since she was a child playing in the soil at her mother’s feet. When she’d seen the job listing for a full-time florist at the Rose Chalet, she’d known it was an opportunity she couldn’t pass up. Not only was it a fantastic job, but she absolutely loved working with Rose, Tyce, RJ and Anne week in and week out to put on the perfect San Francisco weddings.

“Actually,” Rose said, “while most of us are here, I’d like to go through the arrangements for our next wedding.”

“Is there anything to go over?” Tyce asked from where he was packing up a microphone stand. “It’s just the three-peat. We all know what we’re going to be doing at least one more time.”

Marge Banning, the “three-peat,” was heiress to a fortune founded on vitamin pills. She was also the woman who single-handedly confirmed everything Phoebe believed to be true about marriage.

Marge’s upcoming ceremony was her third wedding at the Rose Chalet. The previous two had been big occasions, and they had been identical, using the same flowers, the same cake, even the same dress.

As for the marriages themselves, neither had lasted a year.

“Now Tyce,” Rose said in a tone of gentle rebuke, “you know I don’t like you using that term for Marge. She has as much right to a special, unique wedding as any of our other customers.”

“But she never
wants
a unique wedding,” Tyce pointed out. “She always wants exactly the same thing.”

“I took photos of the arrangements,” Phoebe said, “so I can repeat them, but won’t she want something new this time?”

Rose shook her head. “I’ve already had this conversation with her. Apparently, she loved everything so much last time she wants it
exactly
the same again.”

“She obviously likes the wedding,” Tyce said with a conspiratorial smile across at Phoebe. “It’s just finding the right man for it that’s proving a problem.”

“Tyce,” Rose said, but the warning was halfhearted. “Who knows, maybe this one
will
be right for her. I’m sure we all wish her every happiness, don’t we?”

Sure, Phoebe wished Marge Banning luck. She’d need it. The whole idea that there was a ‘right man’ out there waiting for you was crazy. As if life ever worked like that. And while you were waiting for him to come along, you missed out on actually living your life. Of course, Phoebe had more sense than to say any of that in front of Rose.

“Look,” Rose said, “why not think of this as a relatively easy week? Anne will be taking a vacation week since Marge plans to use the same dress as last time.” Rose smiled at them all and admitted, “With trying to finalize the plans for the house on top of everything else, I could do with an easy week myself. I wish I could go with you to look over landscaping options at the building site, but I’ve got back-to-back meetings all afternoon. Speaking of the building site,” Rose said to RJ, “shouldn’t your brother be here soon?”

Memories of dancing with RJ’s brother swept over—and through—Phoebe just as Patrick Knight came through the doors to the Rose Chalet’s main room, looking every bit as good as he had the previous evening when they’d danced together at the wedding. His dark hair was neatly combed back and a faint dark shadow covered square-jawed good looks. He was wearing a similar casual shirt-and-slacks combination to the one he’d been wearing last night, though he’d thrown a jacket over it. She couldn’t help staring at him for a moment or two, and for one intense moment, he stared back.

“Hi,” she replied awkwardly, trying to think of an excuse to get out of there and away from temptation.

Unfortunately, the perfect excuse didn’t spring to mind. How could it when her brain was too busy replaying every second of how natural, how exciting it had been to be in Patrick’s arms at last night’s wedding?

Good thing she couldn’t forget their conversation while out on the dance floor, either.

“Every woman looks beautiful on her wedding day,”
he’d said, and when she’d asked,
“You like weddings?”
he’d immediately replied,
“Who doesn’t? Two people making that commitment to one another is so important. We should celebrate it more often.”

Patrick might have been great to dance with, and it might have been fun to take things further had he not been RJ’s brother, but Phoebe wasn’t going to waste her time with some kind of romantic who would always want more than she was willing to give. Especially not when the inevitable breakup would make things harder for her working here—the whole mixing work and play issue.

Fortunately, Rose immediately drew Patrick’s attention away from Phoebe as she started talking over plans for the new house. Rose sounded almost girlishly excited as she said, “I can’t believe that Donovan and I are actually doing this.”

Nor could Phoebe. The idea of doing something so utterly permanent as building a house with someone else made Phoebe’s stomach cramp, but if Rose wanted to go and do it, there wasn’t a lot Phoebe could do to stop her. Just as she hadn’t done anything to stop Julie from running off into the happy-ever-after with Andrew Kyle.

All Phoebe could do was be there when things inevitably fell apart. She wished they wouldn’t, of course. If any two people deserved to beat the odds, it was Julie and Rose. Phoebe was still cleaning up the dead flowers as Rose confirmed with Patrick, “You don’t need me at the site today, do you?”

“No,” Patrick said, “RJ and I will take the day to run through various landscaping options which I will then present to you and Donovan.”

“Great.” Rose’s relief at not having her busy work day interrupted was palpable. “Thanks so much for taking care of everything.”

“You ready to head out?” Patrick said to his brother.

“Actually,” RJ replied, “I was thinking that it might be better if Phoebe went.”

“Sure,” RJ said. “Phoebe knows as much about flowers as I do, more probably, so she’s the perfect person to walk the site and come up with ideas. You know she’ll do a great job, Rose.”

His Australian Heiress by Margaret Way
Queen of This Realm by Jean Plaidy
The Baby Snatchers by Chris Taylor
The Innocent Witness by Terri Reed
Safe In His Arms (Manhunt) by Herron, Rita
The Valentine Star by Patricia Reilly Giff
Savage Seduction: A Dire Wolves Mission (The Devil's Dires Book 3) by Ellis Leigh
Mr Gum and the Biscuit Billionaire by Andy Stanton
Neal Barrett Jr. by Dawn's Uncertain Light
The Descent Series, Books 1-3: Death's Hand, The Darkest Gate, and Dark Union (The Descent Series, Volume 1) by Reine, SM
Our partner