Read The Weight of Gravity Online

The Weight of Gravity 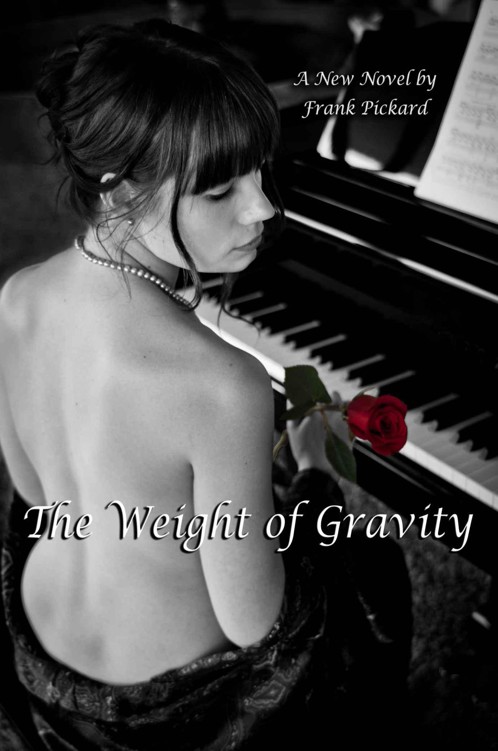 THE WEIGHT OF GRAVITY

All rights reserved.  Except as permitted under the U.S. Copyright Act of 1976, no part of this publication including text and images may be reproduced, distributed, or transmitted in any form or by any means, or stored in a database or retrieval system, without the prior permission of the author.

This book is a work of fiction.  Any stated or implied reference to actual people, living or dead, and events, past or present, depicted in this novel are purely coincidental and not intended by the author or should be inferred by the reader.

Cover:
The Muse
by Sara Jackson

Max is gone, and I miss him so much I’m scatte
red.  He could pull me together of course, but he’s not coming back.  So, I’ll have to find a way to cope.  I have a birthday card or two and, like you, I have his novels.  His writing says more about him than anything else anyway.

I’m not a writer, but Max sure was.
His stories crept into your gut as you read them.  Then, at a precise moment, his words could rip you open and scatter your insides all over the room.  That’s how it felt, how it feels now.  His last novel didn’t have that affect, though: maybe because it was his personal story.

All of
Max’s novels are love stories of one color or another.  I’m convinced that each of them was a steppingstone along a path taking him home to Cottonwood … and to Erika. The eighth novel was his best, maybe because it took a lifetime to write.

One other thing you should know about Max before reading his manuscript.
Max’s outside masked a dark inside.  Life was painful for him.  His humor never went very deep.  I often heard him crying, just below the surface.  The real story here is that Cottonwood changed him.  It chased the clouds away and brought Max out of the shadows.

I have a small part in Max’s personal love story.
Sometimes, standing on the sidelines is the best place to be, you know?  You get the whole picture from the bleachers.

My last official duty to Max was to send this manuscript to you.
He titled it
Beyond the Shoals of Canaan
.  If it were me, I’d simply call it
Cottonwood,
because that’s where the story began.  In truth, Cottonwood was nothing for twenty years, and then it was everything.  You’ll see.  Just keep reading.

“Three, four days, tops!  Marcie.  This is surreal.  I’m in the middle of the Southwest, talking to you in Manhattan, on a phone diabolically concealed in the steering wheel, and traveling at warp speed across a barren landscape.”

“Bluetooth technology has been around a long time, Max.  You just never use it. What do I tell Peter?”

“Where are you?  Are you under the dash?”

“Old joke.  You sound giddy.  I’m frightened.  Have you been drinking?”

“You know I don’t drink.  Tell Peter to trust that I’ll get new chapters out by deadline ... don’t say it ... I’ll say it for you ... first deadline was a month ago, but Peter assured me he could hold the publishers at bay.  Stall ‘em.  You’re my personal assistant … assist!  I need three days.”

He pushed the Jag harder and slipped around a Cobra Mustang that was already running twenty miles over the speed limit.

“Only my tropical fish drink more than you, Max.  And, you’ll need more than th
ree days.  You dumped the novel, remember?  There are no chapters here to show Peter.”

“Good poin
t, but when the writing is easy I can crank a chapter a day.”

“When was the last time the writing was easy?”

“Another good point.  It’s what I love about you, Marcie.  You always cut through the crap.  But this trip feels right, therapeutic maybe. I needed a change of scenery.  At the moment, I’m looking at an alien world compared to the view from my windows in the City.”

The highway was a
narrow bridge along a nearly barren sea of sand, in a landscape spotted with orphaned scrub, mesquite, a few yucca cactus and strands of barbed wire to his left and right that raced along with him.  The tarmac ran straight as a lazar light, front and back, from one horizon to the next.  To his right, and almost beyond sight, ghost-like mountain peaks rose up into a blue-gray, cloudless sky.

“
You call going-on-a-year ‘momentary’.  At the very least Peter will want to know where you are.”

He enjoyed watching the Cobra
in the rearview trying desperately to gain ground on him.  He’d let the shiny red monster get within fifty yards, then pull away until the ‘Stang was half a mile behind.
Should have sprung for the bigger engine, Dude
, he thought.  Each time he pushed the pedal down and felt the Jag leap forward, he took a deep breath.  It’d been a while since he’d felt this energized.

“Tell him I’m doing research out-
of-town and re-working the novel.”

“Deleting the entire
manuscript is a radical re-working.”

“As usual, you don’t mince words
.  Love that about you.  One week, I drive back to Huntington Beach and fly home.”  Max rocketed past a tandem semi-tractor rig, then immediately slingshot the Jag around a purple, late-model Cadillac.

“Great trip … beautiful country.  Stop being a cynic.  We’ll talk in a week.”  He pushed the disconnect button.

In truth, he couldn’t remember two consecutive miles of the ten-hour drive.  The most en
tertaining moment came when he read a billboard on the outskirts of an oil town that read:

While you’ve been away, we’ve been with your wife night-and-day.

Max imagined a pissed off roughneck comi
ng home after eight days in the West Texas oil fields, having stopped at the Honkey-Tonk Lounge on Highway 180, tanked up on a dozen Lone Star beers before passing the billboard, then driving straight to the radio station and accosting the deejay du jour.

Playing tag with the ‘Stang and traveling so fast that the barbed wire
seemed to disappear into a hair-thin thread of silver were his second and third most entertaining moments in the past twenty-four hours … in the past twenty-four months, to be more precise, but that’s why he was here, in the middle of nowhere.  He was traveling on instinct.  Whether his decision to come west was right or wrong wasn’t a consideration for the moment.  His instincts didn’t tell him he was doing the right thing, but, more importantly, they didn’t tell him he was doing the wrong thing, either. He didn’t feel better, but he also didn’t feel worse.  So, it was an improvement.  He felt pulled along by gravity, unable to resist or change course.

It was
Max’s nature always to divide everything in his life, including people, into one of two categories –
Unimportant
or
Important
.  His agent, Peter, his personal assistant, Marcie, the view of Central Park from his balcony, and the gang at his favorite deli were important.  Everything else was unimportant, and that included several hundred miles of desert scenery.  On his climb to fame and fortune, Max fostered a reputation as a passionate conceit -- a talented, maybe brilliant, writer -- but a conceit.  People excused his sarcasm on the weak logic that famous writers are, by nature, sarcastic narcissists.  Or they wrote him off as an intellectual snob, and that was fine.  He wouldn’t waste energy on someone in the
Unimportant
category.  However, from a writer’s perspective, people were interesting, and he liked more of them than he imagined liked him.  But he’d never admit it.  He’d worked hard to cultivate the image -- it’d kept him comfortably distant from the masses.  His writing spoke for him.  He felt safer interacting with people from a distance: detached, uninvolved.  Vulnerability, he’d decided, was dangerous.

He wasn’t thrilled with driving across three Southwestern states.  Flying first-class – as he’d done a day before -- was unquestionably preferred.  But the Jaguar had never been far from the beach-house garage and, more importantly, Max wanted time to think about whether he was doing the right thing -- like deleting his manuscript word-by-word.  He never made up his mind, so he kept driving – and deleting -- in one direction.  Turning the car around scared him more than returning to Cottonwood after twenty-four years.

He pondered
at the outset of his pilgrimage how young he was during his Cottonwood years. Had time worn away the fabric of his memory?  Was he chasing a dream, something invisible or nonexistent?  He’d been adamant about never coming back, but now he skirted the threshold of his hell.  He had no choice.  His instincts were telling him that redemption was in Cottonwood, and her name was Erika Morgan.   Long ago, he’d relegated her to the
Unimportant
category, but she was never far from his thoughts.  One session with Dr. Remy two days ago resurrected the forgotten, provincial world of his youth.

What about your first serious relationship
?

The last few miles were nauseatingly familiar.  Anything new was a clone of the gas stations, motels, auto shops, fast-food restaurants and supermarkets that stood before.  The ghosts engulfing the Jaguar, as he cruised by at eighty miles an hour, were ugly: The restaurant where he’d been knee deep in muck while helping the old man pump leech tanks, the Holiday Inn where he took Erika after the prom, and the gas station where he’d seen her V-dub parked the day he left.  He didn’t stop then, and he didn’t want to stop now.

He passed the provincial
Welcome To Cottonwood
sign – dotted with fraternal seals of the Sertomas, Kiwanas, and Rotary -- when suddenly blue and red lights danced frantically across his dashboard.  He downshifted onto the apron of the highway.

“License and registration,” the trooper demanded.  “Just because you own a kick-ass car, don’t mean you gotta be pushing it that way on our roads, ...”  He looked at Max’s license.  “... Mr. Rosen.”

Max watched in the rearview as the trooper walked back to his patrol car.
It’s a joke, for God’s sake.
He lowered his sunglasses, but immediately raised them against the intense sunlight.  He mused that the radials would melt into the pavement, trapping him forever in a place so oppressive that he nearly suffocated before the end of high school.

“Rosen.”  The officer stood at his window.

“Tell me.  How can you stand out in this heat in a black uniform with long sleeves?  Isn’t the handle of your gun melting into your shorts?”  He peered over the sunglasses.

“You wouldn’t be Nathan Rosen’s kid, would you?”

“No, I think Nathan Rosen’s
kid
grew up.  Then I heard he died.”  The officer didn’t smile.

Lonestar Homecoming by Colleen Coble
Invasion of Justice (Shadows of Justice) by Regan Black
Crow - The Awakening by Michael J. Vanecek
City of Stars by Mary Hoffman
Cameron's Control by Vanessa Fewings
Out of the Blue by Mandel, Sally
Secured Secret by Charity Parkerson
The Perseid Collapse by Steven Konkoly
The Poison Oracle by Peter Dickinson
Netherby Halls by Claudy Conn
Our partner