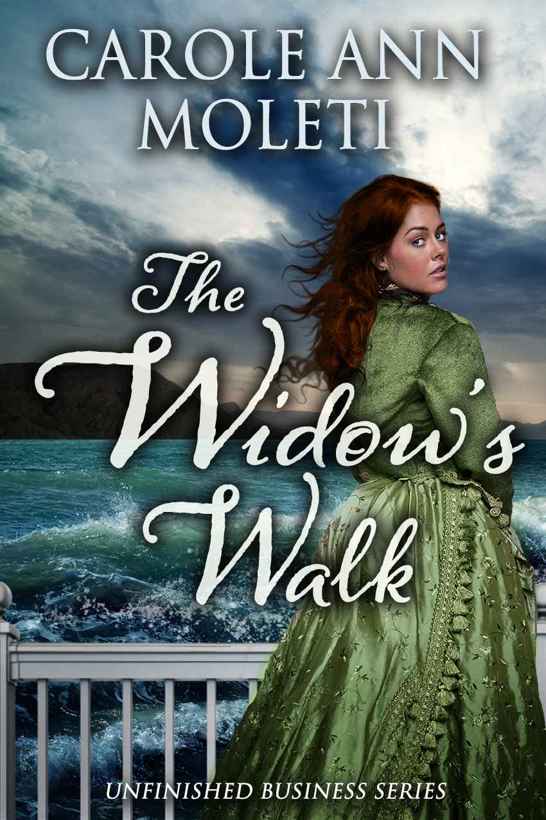 This book is a work of fiction.  The names, characters, places, and incidents are the products of the author’s imagination or are used fictitiously.  Any resemblance to actual events, business establishments, locales, or persons, living or dead, is entirely coincidental.

All rights reserved.  No part of this publication may be reproduced, stored in a retrieval system, or transmitted in any form or by any means (electronic, mechanical, photocopying, recording, or otherwise) without the prior written permission of both the copyright owner and the publisher.  The only exception is brief quotations in printed reviews.

The scanning, uploading, and distribution of this book via the Internet or via any other means without the permission of the publisher is illegal and punishable by law.  Please purchase only authorized electronic editions, and do not participate in or encourage electronic piracy of copyrighted materials.

This book is dedicated

to the memory of my father, Frank Moleti,

and my grandfather, Alexander Bruno,

who inspired my love of sailing,

the sea, and of Cape Cod.

This book would never have been published if it weren’t for the insightful critiques by Barbara Gordon, Andrew Richardson (who has graciously consented to being immortalized within), and John Blackport. Special thanks are due my husband, John Virzi, who has read every draft and offered suggestions and unending support.

I am indebted to Rayne Hall, members of the Professional Author’s Group, critters.org, and the Connecticut Romance Writers Chapter of Romance Writers of America for their help and advice while working on the series. And of course to Deborah Gibson and Janine Giordano for polishing
The Widow’s Walk
.

The ghost was back. The odd smell, cloying, stale, like flowers a few days past their prime, tickled Mike’s nose. He rolled over and patted the tousled heap of linen. Liz wasn’t next to him, which wasn’t unusual. The baby still wasn’t sleeping all night, and she’d feed him in the nursery. But he shouldn’t be this cold under all these blankets. And that odor . . . Mike’s heart thumped, double time. “Liz?” No answer. “Shit.”

He jumped out of bed, knees wobbling as he regained some balance. His breath vaporized. The dim nightlight cast a shadow over the room, draping everything in frosty gray mist. And Liz stood in the middle of it, in front of the window, her gaze fixed on Cape Cod Bay. Tangled curls cascaded over her shoulders. Tears sparkled like flecks of ice on an unsmiling face. Her body glowed as if light shone through translucent skin. He’d seen the green silk gown on a hanger, along with the other vintage pieces. But never on her.

Nausea washed over him like a rogue wave. A voice from deep inside, his, but yet not his, compelled his lips to move. “Elisabeth?” He lunged, grabbed her, but his hands caught only air.

She faded like specks of dust. Pain seared through his brain like a bullet, as a vision of carrying her body back to this room and laying it on this very bed played out like a living nightmare. Bile rose into his throat. His heart raced, then suddenly his cheeks burned. Sweat drenched his bathrobe, and he ripped it off. He shook his head to clear it, rubbed his eyes, and staggered toward the bathroom.

Liz, in the flesh, in her nightgown, came out of the nursery. “Mike, what’s wrong?”

Her voice, and the scent of lemon, cleared his head. He forced himself to breathe deeply.

“I’m hallucinating. Must have a fever.” Mike shivered and groped again, this time making contact with her warmth, her soft curves. He held her close.

She touched his forehead and helped him to bed. “You don’t feel hot.”

He burrowed under the covers to warm up, to hide.

Liz nestled next to him. “You probably got some bug.”

“Sure, whatever.” These random appearances made sense, at least as much sense as anything could make after finding out your house was haunted and the ghosts were trying to take control of every living thing in it. Liz dropped off to sleep immediately. Her heart pulsed like a metronome, rhythmic, soothing.

That citrus scent after her bath,
mmm
. Watching her dry off, massage lotion into her skin, and dust on powder. He appreciated whenever she turned her attention to him. Her focus was usually split between him, the house, the business, and the baby. She’d done Valentine’s Day right, starting with a filet mignon dinner by candlelight–after the baby went to sleep–and herself for dessert.

This was the first time Elisabeth Barrett had manifested herself. The rumblings were stronger, more insistent these days. They had to get the hell out of this house. Mike’s gaze kept drifting to the window, looking for more specters.

The baby did his usual total body wiggle when he saw his father. Eddie wriggled, and giggled as Mike blew a bearded raspberry on his belly before the tapes on the diaper crackled open. The kid was so damn good-natured he was a pleasure to be around. Even at 6 a.m. on Sunday. Even though he wasn’t his.

Mike took him downstairs and buckled him into the highchair. Slivers of bleached sunlight barely penetrated the lace curtains. The woodstove had gone out, leaving the kitchen as chilly as the bedroom in the drafty old house. He passed a hand over the baseboard. Yeah, there was heat but it only kept it warm enough that he couldn’t see his breath.

“Here you go, Eddie.” He mixed a jar of organic applesauce with powdered cereal and spooned the disgusting mush into the baby’s mouth. Between spoonfuls, Mike prepped the firebox for more heat by stuffing wood and newspaper into its belly. After striking the match and igniting the kindling, he set back to feeding the baby.

He tried to enjoy the quiet of a midwinter Sunday. No inn guests, no chambermaids. No need to go freeze his ass off on Cape Cod Bay so Boston restaurants could offer live lobsters in the middle of winter.

While Mike tended to the fire, Eddie grabbed the spoon and launched a blob across the room. He proceeded to feed himself by shoving his hands into the bowl and then into his mouth.

Such mundane annoyances usually tricked Mike, like any adoptive father, into believing he was just a nice guy, crazy in love, stepping up to the plate for a man who couldn’t or wouldn’t take responsibility for his own kid. Not today.

He put the kettle on to boil, mopped up cereal from the floor and then sponged the gluey mixture off the baby’s hands and arms. Could this ever be cleaned up?

Liz shuffled into the kitchen, tying her bathrobe closed. “Today is supposed to be your turn to sleep late.” She kissed him on the cheek, then smothered the baby with those silly mommy kisses and unintelligible babble. Usually that was cute, too. Not today.

“When you’re used to getting up a certain time, you just do.” Liar. He was so tired these days he could sleep twenty-four hours straight.

She lowered her head. “This time last year you were semi-retired, and now you’ve got a wife who’s broke, a baby, and a haunted house. Working six days a week is making you sick.”

“I knew what I was getting myself into when we got married. I supported my first wife and kid by fishing, and I’m prepared to do it again.” Why was he getting all manly about this? It had nothing to do with things normal couples dealt with. They were different from everyone else. Real different.

Liz poured herself a cup of tea and a bowl of Raisin Bran for each of them. “You’re too old to be out there in this weather.”

He bristled like a mossbunker trapped on the flats at low tide. “I don’t feel a day over forty. And I don’t think I look it either.”

She traced a conciliatory finger down his chest, a lascivious grin on her face. “No, and you certainly don’t show any signs of slowing down. But it’s dangerous out there all alone.”

Liz got milk from the fridge and mopped up the mess Eddie had made on his tray. “I’m applying to substitute teach.”

The cereal looked far too much like Eddie’s mush. Mike’s head pounded, and the baby drumming with a plastic teether wasn’t helping. How could the glorious night before have turned into such a miserable morning after? “Once my house sells, the money situation will ease up. And, to be honest, it bothers me more that the Elizabeth’s ghost is getting so restless.”

A shadow flashed across Liz’s face, turning her normally smiling countenance into an expressionless, chin up, look-down-the-nose glare. “I’ve got things under control.”

Snow swirled, wind rattled the old windows, and seeped through the open draperies. The ominous portent wrapped around him like a damp blanket. He shuddered, but it wasn’t just from the cold. “I’m going back to bed.”

Liz’s sweet, friendly smile returned and she pulled Eddie’s chair closer to her. “You deserve to sleep as long as you want.”

He kissed her on the top of the head. Mmm, she still smelled like lemonade but he’d not be getting another sip until at least tonight–and probably a lot longer than that.

Mike untangled a baby blanket that had fallen on the stairs from around his feet and carried it up to their bedroom. The dense, oppressive chill followed him into the nursery they had fashioned out of the huge walk-in closet in the master bedroom. A moldy flower smell assaulted his nostrils. The green dress lay crumpled over a hassock in the corner.

No more denials. They had to get out of here–now.

Unravel by Samantha Romero
The House in Paris by Elizabeth Bowen
Gangbuster by Peter Bleksley
Fancy Gap by C. David Gelly
Algoma by Dani Couture
Easy to Like by Edward Riche
Together is All We Need by Michael Phillips
Spy Trade by Matthew Dunn
Naked in Knightsbridge by Schmidt, Nicky
Hitler's Foreign Executioners by Christopher Hale
Our partner