Read The Wild One Online 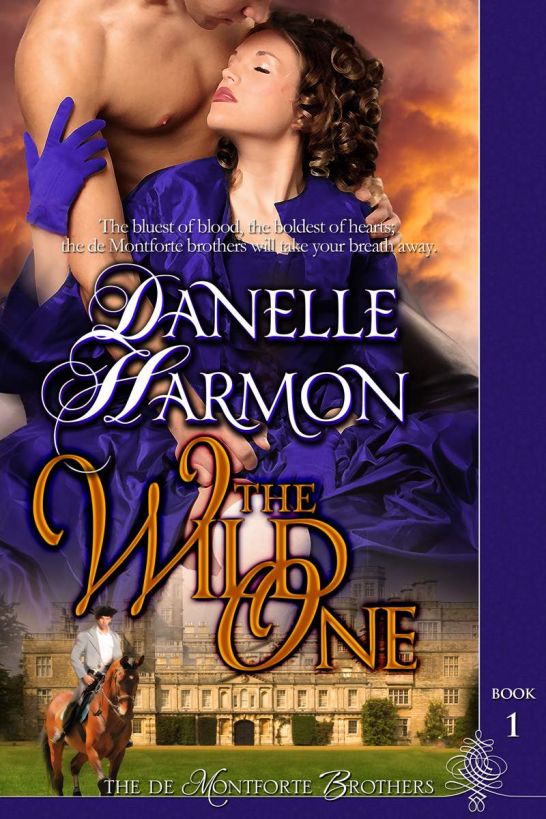 "The bluest of blood, the boldest of hearts; the de Montforte brothers will take your breath away."

England, 1776: Lord Gareth de Montforte is known as an irresponsible rake with a heart of gold. When he takes a bullet for boldly thwarting a stagecoach robbery, he is stunned to discover that the beautiful young woman he has heroically rescued, Juliet Paige, is his deceased brother’s American fiancée, accompanied by her infant daughter.

Despite his brother the duke's refusal to acknowledge Juliet, Gareth is determined to do right by the courageous woman who crossed an ocean to give her baby her rightful name. But Juliet is wary of marrying this black sheep aristocrat, even while she is hopelessly charmed by the dashing devil. Never has she met anyone who embraces life so thoroughly, who makes her laugh, who loves her so well. And, even when it seems the odds are against them, Juliet has absolute faith that Gareth will go beyond the call of duty, risking his life itself to give her and her daughter a home — and a love that will last a lifetime. 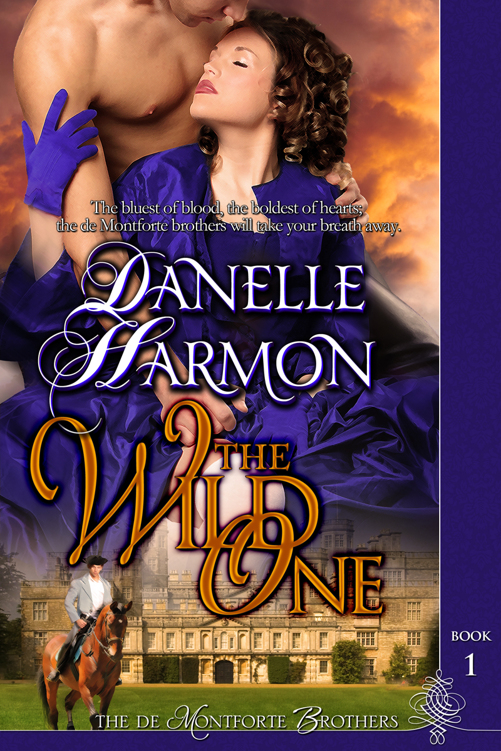 This ebook is
licensed for your personal enjoyment only. This ebook may not be
resold or given away to other people. If you would like to share
this book with another person, please purchase an additional copy
for each recipient. If you're reading this book and did not
purchase it, or it was not purchased for your use only, then please
return to Smashwords.com and purchase your own copy. Thank you for
respecting the hard work of this author.

Discover other titles by
Danelle
Harmon

It has just gone dark and as I pen these
words to you, an air of rising tension hangs above this troubled
town. Tonight, several regiments — including mine, the King's Own —
have been ordered by General Gage, commander in chief of our forces
here in Boston, out to Concord to seize and destroy a significant
store of arms and munitions that the rebels have secreted there.
Due to the clandestine nature of this assignment, I have ordered my
batman, Billingshurst, to withhold the posting of this letter until
the morrow, when the mission will have been completed and secrecy
will no longer be of concern.

Although it is my most ardent hope that no
blood will be shed on either side during this endeavour, I find
that my heart, in these final moments before I must leave, is
restless and uneasy. It is not for myself that I am afraid, but
another. As you know from my previous letters home, I have met a
young woman here with whom I have become attached in a warm
friendship. I suspect you do not approve of my becoming so
enamoured of a storekeeper's daughter, but things are different in
this place, and when a fellow is three thousand miles away from
home, love makes a far more desirable companion than loneliness. My
dear Miss Paige has made me happy, Lucien, and earlier tonight, she
accepted my plea for her hand in marriage; I beg you to understand,
and forgive, for I know that someday when you meet her, you will
love her as I do.

My brother, I have but one thing to ask of
you, and knowing that you will see to my wishes is the only thing
that calms my troubled soul during these last few moments before we
depart. If anything should happen to me — tonight, tomorrow, or at
any time whilst I am here in Boston — I beg of you to find it in
your heart to show charity and kindness to my angel, my Juliet, for
she means the world to me. I know you will take care of her if ever
I cannot. Do this for me and I shall be happy, Lucien.

I must close now, as the others are gathered
downstairs in the parlour, and we are all ready to move. May God
bless and keep you, my dear brother, and Gareth, Andrew, and sweet
Nerissa, too.

Sometime during the last hour, it had begun
to grow dark.

Lucien de Montforte turned the letter over
in his hands, his gaze shuttered, his mind far away as he stared
out the window over the downs that stood like sentinels against the
fading twilight. A breath of pink still glowed in the western sky,
but it would soon be gone. He hated this time of night, this still
and lonely hour just after sunset when old ghosts were near, and
distant memories welled up in the heart with the poignant nearness
of yesterday, close enough to see yet always too elusive to
touch.

But the letter was real. Too real.

He ran a thumb over the heavy vellum, the
bold, elegant script that had been so distinctive of Charles's
style — both on paper, in thought, and on the field — still looking
as fresh as if it had been written yesterday, not last April. His
own name was there on the front:
To His Grace the Duke of
Blackheath, Blackheath Castle, nr. Ravenscombe, Berkshire,
England.

They were probably the last words Charles
had ever written.

Carefully, he folded the letter along
creases that had become fragile and well-worn. The blob of red wax
with which his brother had sealed the letter came together at the
edges like a wound that had never healed, and try as he might to
avoid seeing them, his gaze caught the words that someone, probably
Billingshurst, had written on the back....

Found on the desk of Captain Lord Charles
Adair de Montforte on the 19th of April 1775, the day on which his
lordship was killed in the fighting at Concord. Please deliver to
addressee.

A pang went through him. Dead, gone, and all
but forgotten, just like that.

The Duke of Blackheath carefully laid the
letter inside the drawer, which he shut and locked. He gazed once
more out the window, lord of all he surveyed but unable to master
his own bitter emptiness. A mile away, at the foot of the downs, he
could just see the twinkling lights of Ravenscombe village, could
envision its ancient church with its Norman tower and tombs of de
Montforte dead. And there, inside, high on the stone wall of the
chancel, was the simple bronze plaque that was all they had to tell
posterity that his brother had ever even lived.

God help them all if anything happened to
him, Lucien, and the dukedom passed to the third.

No. God would not be so cruel.

He snuffed the single candle and with the
darkness enclosing him, the sky still glowing beyond the window,
moved from the room.

The Flying White was bound for Oxford, and
it was running late. Now, trying to make up time lost to a broken
axle, the driver had whipped up the team, and the coach careered
through the night in a cacophony of shouts, thundering hooves, and
cries from the passengers who were clinging for their lives on the
roof above.

Strong lanterns cut through the rainy
darkness, picking out ditches, trees, and hedgerows as the vehicle
hurtled through the Lambourn Downs at a pace that had Juliet
Paige's heart in her throat. Because of Charlotte, her
six-month-old daughter, Juliet had been lucky enough to get a seat
inside the coach, but even so, her head banged against the leather
squabs on the right, her shoulder against an elderly gent on her
left, and her neck ached with the constant side to side movement.
On the seat across from her, another young mother clung to her two
frightened children, one huddled under each arm. It had been a
dreadful run up from Southampton indeed, and Juliet was feeling
almost as ill as she had during the long sea voyage over from
Boston.

The coach hit a bump, became airborne for a
split second, and landed hard, snapping her neck, throwing her
violently against the man on her left, and causing the passengers
clinging to the roof above to cry out in terror. Someone's trunk
went flying off the coach, but the driver never slowed the
galloping team.

"God help us!" murmured the young mother
across from Juliet as her children cringed fearfully against
her.

Juliet grasped the strap and hung her head,
fighting nausea as she hugged her own child. Her lips touched the
baby's downy gold curls. "Almost there," she whispered, for
Charlotte's ears alone. "Almost there — to your papa's home."

Suddenly without warning, there were shouts,
a horse's frightened whinny, and violent curses from the driver.
Someone on the roof screamed. The coach careened madly, the
inhabitants both inside and out shrieking in terror as the vehicle
hurtled along on two wheels for another forty or fifty feet before
finally crashing heavily down on its axles with another
neck-snapping jolt, shattering a window with the impact and
spilling the elderly gent to the floor. Outside, someone was
sobbing in fear and pain.

And inside, the atmosphere of the coach went
as still as death.

"We're being robbed!" cried the old man,
getting to his knees to peer out the rain-spattered window.

Shots rang out. There was a heavy thud from
above, then movement just beyond the ominous black pane. And then
suddenly, without warning it imploded, showering the inside
passengers in a hail of glass.

Gasping, they looked up to see a heavy
pistol — and a masked face just beyond it.

It was the very devil of a night. No moon,
no stars, and a light rain stinging his face as Lord Gareth Francis
de Montforte sent his horse, Crusader, flying down the Wantage road
at a speed approaching suicide. Stands of beech and oak shot past,
there then gone. Pounding hooves splashed through puddles and
echoed against the hedgerows that bracketed the road. Gareth
glanced over his shoulder, saw nothing but a long empty stretch of
road behind him, and shouted with glee. Another race won — Perry,
Chilcot, and the rest of the Den of Debauchery would never catch
him now!

And pulled him up sharply at he passed
Wether Down.

It took him only a moment to assess the
situation.

Highwaymen.
And by the looks of it,
they were helping themselves to the pickings — and passengers — of
the Flying White from Southampton.

The Flying White?
The young gentleman
reached inside his coat pocket and pulled out his watch, squinting
to see its face in the darkness. Damned late for the Flying
White...

He dropped the timepiece back into his
pocket, steadied Crusader, and considered what to do. No gentlemen
of the road, this lot, but a trio of desperate, hardened killers.
The driver and guard lay on the ground beside the coach, both
presumably dead. Somewhere a child was crying, and now one of the
bandits, with a face that made a hatchet look kind, smashed in the
windows of the coach with the butt end of his gun. Gareth reached
for his pistol. The thought of quietly turning around and going
back the way he'd come never occurred to him. The thought of
waiting for his friends, probably a mile behind thanks to
Crusader's blistering speed, didn't occur to him, either.
Especially when he saw one of the bandits yank open the door of the
coach and haul out a struggling young woman.

The Last Days of Wolf Garnett by Clifton Adams
Rook & Tooth and Claw by Graham Masterton
Hopeless Magic by Rachel Higginson
Summer Of 68: A Zombie Novel by Millikin, Kevin
A Season of Love by Amy Clipston
A Breach of Promise by Anne Perry
Icefalcon's Quest (Darwath) by Hambly, Barbara
Rescue (Emily and Mason) by Seiters, Nadene
The Dark Mirror by Juliet Marillier
INTO THE FIRE (Forbidden Love) by James, Danielle
Our partner