Read The Winds of Marble Arch and Other Stories Online

The Winds of Marble Arch and Other Stories 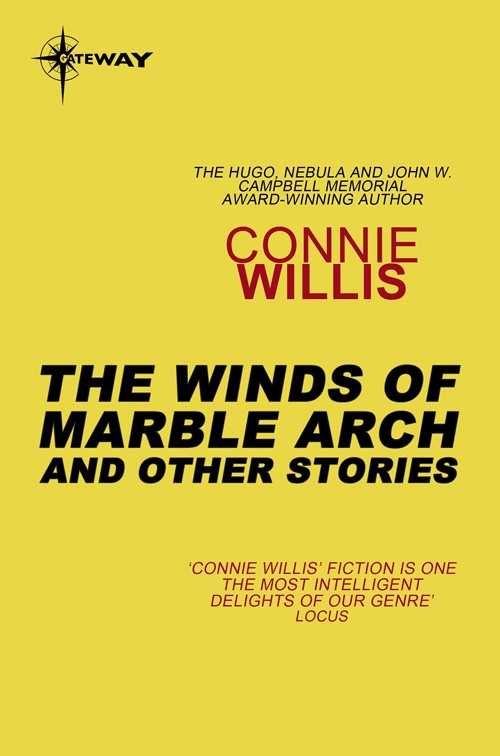 The Winds of Marble Arch and Other Stories

In the last years of the twentieth century (as Wells might have put it), Gollancz, Britain’s oldest and most distinguished science fiction imprint, created the SF and Fantasy Masterworks series. Dedicated to re-publishing the English language’s finest works of SF and Fantasy, most of which were languishing out of print at the time, they were – and remain
– landmark lists, consummately fulfilling the original mission statement:

Now, as we move inexorably into the twenty-first century, we are delighted
to be widening our remit even more. The realities of commercial publishing are such that vast troves of classic SF & Fantasy are almost certainly destined never again to see print. Until very recently, this meant that anyone interested in reading any of these books would have been confined to scouring second-hand bookshops. The advent of digital publishing has changed that paradigm for ever.

Welcome to the new home of Science Fiction & Fantasy. Welcome to the
most comprehensive electronic library of classic SFF titles ever assembled.

The Winds of Marble Arch

Daisy, in the Sun

A Letter from the Clearys

Parking Fines and Other violations

All My Darling Daughters

In the Late Cretaceous

The Curse of Kings

Matters of Life and Death

The Last of the Winnebagos

Service for the Burial of the Dead

The Soul Selects Her Own Society

An Introduction to This Book, or “These Are a Few of My Favorite Things”

Actually, writers have no business writing about their own works. They either wax conceited, saying things like: “My brilliance is possibly most apparent in my dazzling short story, “The Cookiepants Hypoteneuse.” Or else they get unbearably cutesy: “My cat Ootsyuwootums has given me all my best ideas, hasn’t oo, squeezumns?”

Or they tell us things we DO NOT want to know about how and under what circumstances they got the idea for the story—“Late one January night in the throes of food poisoning, I found myself on the cold tile floor of my bathroom, thinking …”

This has brought me to the conclusion that writers should only be allowed to talk about other authors’ books, not their own. They’re hardly ever good judges
of their own stuff. Mark Twain thought
Tom Sawyer
was his best novel. Wrong. (Though the scene where Huck and Tom go to their own funeral is pretty good.)

And the places most stories come from aren’t that interesting. I’ve had stories come from walking to the post office and from misreading a billboard and from being stuck behind an RV going five miles an hour. And from listening, or rather,
not
listening to boring sermons. I am not alone in this. P.G. Wodehouse’s “The Great Sermon Handicap” was obviously inspired by a particularly long and numbing sermon, and who knows how many other great works of literature have been spawned in this way?
The Scarlet Letter? Remembrance of Things Past? Lolita?

Once I even got a story idea while watching
General Hospital.
It was during the glory
days of Luke and Laura, and everyone thought Luke was dead. They were having a funeral for him at the disco (don’t ask) and Luke had sneaked back to get something and was listening to his own eulogy, and I thought, “Why, they stole that from
Tom Sawyer
,” and then, “Well, if they can steal it, I can steal it.”

But none of that really tells you anything about where the idea really came from—somewhere
deep in the temporal lobe, I suspect, or the amygdala—or why an overheard conversation or the sight of a flock of geese being snowed on or a headline will suddenly strike the writer as hilarious (I read an article this morning about a high school principal who’d issued rules for dancing at the prom which included, “Both feet must remain on the floor at all times”) or troubling or ironic or
appalling (or all of the above), and will trigger something in them that compels them to write a story.

And it tells you nothing at all about how the story got from Idea to Finished Product. (The General Hospital/Tom Sawyer idea took a sharp left turn and became a ghost story.) And you
really
don’t want to know that, any more than you want to know how Houdini escaped from that locked trunk. As
one of my Clarion West students said after I’d explained a plotting technique I’d used, “I thought you were a good writer, but it’s just a lot of tricks.”

So I won’t tell you any of that. And I definitely won’t talk about my career. No one in their right mind wants to hear it. Which doesn’t leave much in the way of topics. But we are both too far into this introduction to back out now. So how
about if I tell you about some of the things I find interesting and/or love and which may or may not have influenced the stories you are about to read? Like:

I stumbled on
Robert A. Heinlein’s
Have Space Suit, Will Travel
when I was thirteen and have never recovered. I promptly read all of Heinlein’s books and then everything else in my public library with a spaceship-and-atom
symbol on the spine, which, luckily for me, included a complete collection of
The Year’s Best from Fantasy and Science Fiction
, which were even more amazing than Heinlein. I was able to read stories by Kit Reed and Theodore Sturgeon and Zenna Henderson and Fredric Brown, “Vintage Season” and “Flowers for Algernon” and “The Veldt” all in one volume, fairy tales and imaginative high-tech futures
and nightmares (political, social, and literal) and bittersweet love stories and knock-your-socks-off pyrotechnical experiments in styles and ideas. They gave me a glimpse of science fiction’s incredible range of tone and ideas and techniques, from Philip K. Dick’s mind-twisting “I Hope We Shall Arrive Soon” to Bob Shaw’s heartbreaking “The Light of Other Days,” from William Tenn’s funny “Bernie
the Faust” to John Collier’s haunting “Evening Primrose” to Ward Moore’s terrifying “Lot.”

It seemed interested in anything and everything—science, psychology, stars (both astronomical and Hollywoodian), ghosts, robots, aliens, dodos, illuminated manuscripts, Martians, merry-go-rounds, nuclear war, spaceships, curious little shops… There was nothing that fell outside its boundaries. And since
I was interested in everything, too—from campus parking to signing apes to mistakes that can’t be rectified—I fell hopelessly in love with the field. I’ve been in love ever since.

THREE MEN IN A BOAT

On the very first page of
Have Space Suit, Will Travel
, Kip’s father is reading Jerome K. Jerome’s classic
Three Men in a Boat
while Kip is trying to talk to him about going to the moon. His dad
tells Kip his situation is similar to that of J, Harris, and George when they discover they’ve forgotten the can opener. (Why he suggests this is beyond me. The three men nearly put George’s eye out in their efforts to get the tin of pineapple open and never do succeed.) Well, anyway, as soon as I finished reading
Have Space Suit
, I found a copy of
Three Men
and read it and joined that lucky group
of people who laugh aloud at the mere mention of large smelly cheeses, small sarcastic dogs, and killer swans. My favorite part of the book is the chapter where they get lost in the Hampton Court maze…no, wait, the part about the comic songs…no, wait, the packing scene…no, wait…

This gave me an early
taste for humorous authors, of which there were—and are—far too few (though there are
lots
who
labor under the misapprehension that they’re funny.) Among the
truly
funny I’ve found and hoarded over the years are P.G. Wodehouse (I love the golf stories best, followed closely by Bertie and Jeeves, the Empress of Blandings, and assorted bulldogs), E.F. Benson’s
Mapp and Lucia
books, Calvin Trillin, Helen Fielding’s
Bridget Jones’s Diary
, Stella Gibbons’
Cold Comfort Farm
, Anita Loos’
Gentlemen
Prefer Blondes
, Dorothy Parker, and, of course, Mark Twain. And Shakespeare. (See next section.) They all (except maybe Dorothy) share a tremendous affection for humanity and a delight in demolishing the pompous, the smug, the self-righteous, and the willfully stupid.

One of the things that I like best about science fiction is that it has so many wonderfully funny writers and stories—Ron Goulart,
Fredric Brown, Howard Waldrop, Shirley Jackson’s “One Ordinary Day with Peanuts,” Gordon Dickson’s “Computers Don’t Argue.” And that it provides me a place for writing the romantic comedies I love. “At the Rialto” was probably the most fun, though “Ado” runs a close second, since it gave me a chance to write about Shakespeare, whom I adore even when he isn’t being played by Joseph Fiennes. Which
brings us to:

I know, I know, everybody loves Shakespeare. But how can you
not
love him? I mean, Mercutio and Bottom and “It is the nightingale,” and Birnam Wood and “We band of brothers!” and
The Mousetrap
and “A horse! A horse! My kingdom for a horse!” and Dogberry and “Come, kiss me, Kate,” and poor hanged Cordelia. What’s not to love? My favorite play is
Twelfth Night
, which
manages to be hilarious and heartbreaking at the same time. (I recommend the Imogen Stubbs and Ben Kingsley version.) Tom Stoppard’s right. Viola’s the best heroine ever written.

I also hate
Shakespeare. He is
so
good at everything: character, plot, dialogue, comedy, tragedy, suspense, variety, romance, snappy banter, irony. It’s obvious every single one of the good fairies was present at his
christening. (The bad fairy’s curse obviously went something like, “No one will believe a boy from Stratford-on-Avon could write this stuff, and they’ll drive you crazy by claiming your plays were written by Christopher Marlowe, Queen Elizabeth, or a committee.”)

Most of us writers limp along with one or two gifts, or none, or are stuck telling the same story over and over, like F. Scott Fitzgerald
with Zelda, or only have one book in them, like Margaret Mitchell or Harper Lee. But Shakespeare wrote tons of stuff, and it’s all great. He can do slapstick and sword fights and love scenes and philosophy. His supporting characters are terrific—Feste and Puck and Polonius and Falstaff—and his women are the best in the business—Beatrice and Portia and Helena and Lady Macbeth and Rosalind. His
story structure’s dazzling, his death scenes are unforgettable—Lear saying, “For (as I am a man) I think this lady to be my child Cordelia,” and “Never, never, never, never, never.” He could take the exact same story of star-crossed lovers and do it as tragedy
(Romeo and Juliet)
and then farce (the Pyramus and Thisbe play in
A Midsummer Night’s Dream)
and romantic comedy
(Much Ado About Nothing)
and ironic tragicomedy
(A Winter’s Tale)
and say something new and original every time. And, as if that weren’t enough, he invented the entire language the rest of us use, from “the witching hour” to “Westward, ho!” It is so totally unfair.