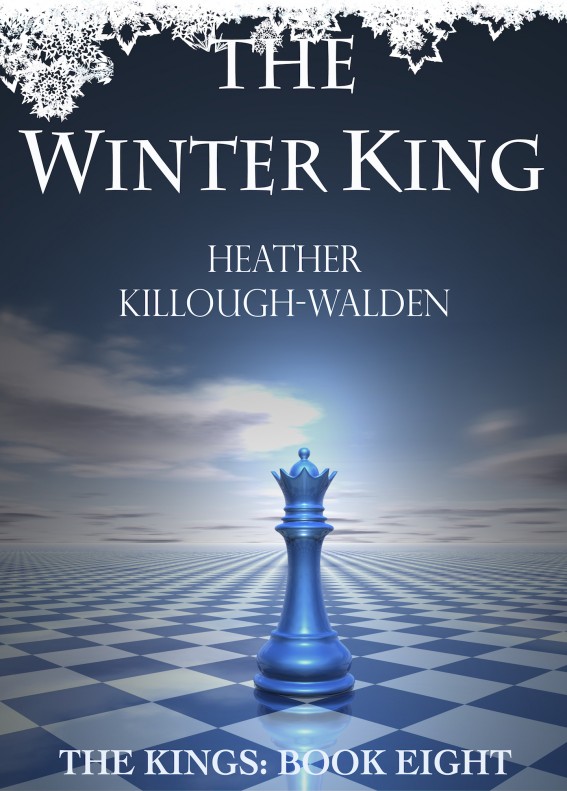 Book 8 in the Big Bad Wolf spinoff series, The
Kings

Discover other titles by Heather Killough-Walden at
Smashwords.com:

AND INCREDIBLE CONTESTS AND GIVEAWAYS!

I LOVE MY READERS!

(in their proper order so
far)

Note: The Lost Angels
series (not including Always Angel, Warrior’s Angel and Samael) and
the Big Bad Wolf series are available in print and eBook format.
All other HKW books are currently eBook-only.

“Chess is ruthless. You've
got to be prepared to kill people.”

Erikk narrowed his gaze and placed his hands
above and beneath his eyes, blocking the miniscule sunlight to the
south and the reflection of it from the snow below. This far north,
the sun appeared for a mere few days before vanishing altogether
for most of the year. But of course it would hinder his vision now.
Patches left over from the early snow weeks ago had yet to melt and
extended directly to the edge of the overhanging cliffs on which he
stood.

He watched the waves on the water below for
some time before lifting his head and inhaling deeply, drawing in
the scents on the breeze.

“
There’s another storm on
the way, isn’t there?”

Erikk looked down, dropping his arms. His
little sister, Ylva, stood beside him, having come upon him as
quietly as ever. There was a reason she’d been named for the wolf.
“Within three days, perhaps four. Bigger than before. It will mark
winter’s beginning and the end of the time of waiting.” Fall to the
people across the sea to the west was known as “the time of
waiting.” His grandfather, Ohthere had traveled there years ago and
had come back to tell tales of their ways. It made sense to Erikk
and Ylva, because that was what you did when winter was on the way.
You waited. Hence, ever since the stories, brother and sister had
referred to fall as such.

But this second storm was coming far too
early for the heaviness it carried. The storm would bury them.

“
You should tell father. He
is having Bjarke lead a ship to go-a-viking by tomorrow’s sunrise.
He wants him to go south past the Lapp settlements, and I think he
wants you to go as well.”

Erikk bristled. Bjarke was a menace. He
hated to have to accompany the brute, but if he didn’t for every
trade with the islands, the man would wreak havoc on any crew
assigned to him. Bjarke could not be left alone.

“
I’ll speak with father.”
He turned and left his younger sibling on the outcroppings
overlooking the sea and knew she would remain there for some time,
her gaze peering toward the horizon and the ice that waited beyond
it. She was always looking northward, toward the cold, toward the
bears. It was where her heart seemed to reside.

As Erikk neared the camp, another young man
in leathers approached. Erikk smiled at him warmly. “Ronald. How do
you fare?”

“
All healed up and never
better. I’m to accompany you tomorrow morning.”

Erikk frowned, glancing at his best friend’s
arm, which was still wrapped – and his leg, which was also wrapped.
“I doubt it.”

Ronald’s red eyebrows raised, and he made a
face. “Aw, let a man be, Erikk. I really am feeling well again. And
you’ll need someone on your side with Bjarke at the helm. He has it
in for you. He hates you even more now because you bested him four
nights ago.”

Ronald Dagfinnr was a medium-sized man the
same age as Erikk, ten and six years. He had braids of red hair and
the lucky and early beginnings of a beard. Ronald was fairly sure
his beard gave him magical powers, and he had been acting a might
too brave for Odin’s wisdom of late. The last time they’d gone out
fishing together, he’d made the mistake of jumping into the
freezing water in order to attempt to wrestle a male narwhal. The
beast had speared him in two places before flippantly swimming off
again.

Erikk had been forced to haul the bleeding
man out of the water before the blood drew unwanted company.
Fortunately, the cold of the water caused him to bleed less. On the
other hand, he’d lost a toe.

To Ronald’s defense, the
horn would have brought a mighty good trade. And what he said about
Bjarke was true enough. The brute hated Erikk, not only because
Erikk was the chief’s son and next in line as leader, but because
Erikk had actually
earned
that honor. He was admittedly more handsome than
most of the men in the camp, and had drawn the attentions of a
handful of maidens who were more than content to warm his bed at
night. Bjarke had enough reason for jealousy there alone. But at
the age of sixteen, a full five years younger than Bjarke, who was
twenty-one, Erikk was already larger than most of the men in the
camp, taller and broader shouldered. He sported the coveted gold
hair of Sif, and eyes of clearest, coldest blue. But most
importantly, Erikk had proven himself a more skilled fighter than
the other men in the camp, even Bjarke. His command decisions were
invariably more intelligent than Bjarke’s, and that didn’t go
unnoticed by the swine either.

All in all, he had an enemy for life, if not
several. It was a shame, too, because Bjarke’s family was not
without value all in all. His older sister, Toril, had been a
shield maiden of glorious success. She’d won seven battles before
she’d finally fallen beneath the enemy’s blade at the age of
twenty-seven. She’d been mighty and honorable. No doubt, Toril had
become a Valkyrie upon her death, and now lead other mighty
warriors to their final resting place in Valhalla.

“
Tell me something, Ronald.
How did you know we were to go-a-viking in the morning?”

Ronald shrugged, then winced when the
movement no doubt pulled on his stitches. Jorunn was very good with
those needles she carved out of bone, but the sinew she sewed into
the flesh drew a need for ale none the less. “I’ve been speaking
with your mother,” said Ronald. “And of course, she knows
everything your father does and says. She’s got Frigga’s eyes and
ears, she does.”

Erikk’s little sister was another point of
contention between himself and Bjarke. Bjarke felt Ylva would be
the perfect mate for him. And Erikk, quite simply, did not. The
girl was but eleven years, for Odin’s sake.

Ronald brightened at the prospect of seeing
Ylva, whom he’d always been fond of. He nodded. “Right.” He began
to walk around Erikk, but stopped and turned back. “I’ll be going
with you, won’t I?” he asked before Erikk had gone too far.

“
There’s a storm coming. We
should not be going at all.”

Erikk left it at that and continued into the
camp, heading directly for his father’s hut. It was one of the
larger in the camp, its pointed roof composed of thatch and running
flush with the ground, its facial walls constructed of stripped
logs. His people did not use chimneys to vent their fire pits, as
Erikk had seen used in some of the buildings belonging to those
they traded with. Instead, their roofs were simply ventilated
enough that smoke never gathered long.

Smaller huts in the camp bore leather
reinforced roofs, and the smallest domiciles were mere tents made
of wolf and sealskin. But the chief of the clan, of course, lived
in the chief’s house. And that was where Erikk went now.

“
Father, I request a word.”
He entered the hut by ducking beneath the door’s overhang and
shutting the door securely behind him. His mother and father were
at the table, speaking quietly.

His father, Rangvald of the Wilds, looked up
and met his gaze. Eyes like his own stared back at him, a piercing
blue the shade of the ice mountains where they rose from the sea in
the north. “Then have it, son.”

“
You are sending Bjarke
tomorrow with a crew to trade with the islands to the
south?”

“
Aye. I had expected you to
go with them, however. Why do you ask this as if you do not plan to
be included?”

“
There is a storm coming,
and the sea will be angry. We should remain here.”

Rangvald considered him carefully and for a
long time. Erikk’s mother, Thyra turned to regard her son as well,
her own blue eyes a much deeper hue, like the North Sea itself.

She turned back to her husband and said, “He
always knows, Rangvald.”

The chief watched his wife’s face for a
moment, then nodded. “Erikk, speak with Bjarke. He is already
rounding up the crew. I believe you’ll find him with Sigurd and
Ingvar.”

Erikk nodded and left the hut.

When evening came, the camp was subdued,
with an undercurrent of resentment that left Erikk feeling as
though there were more than one storm on the way.

“
He’s been giving you the
eye all night, Erikk,” said Ylva softly. “It doesn’t help that the
trade was going to bring in more mead. Bjarke is unpleasant if he
doesn’t have his drink.”

And she was right. Bjarke was like a bear
who’d had his fish taken from him. He wanted a kill, he wanted a
meal, and he wanted them both now. To say nothing of the mead. Both
ale and mead were running short, made so by the early storm they’d
had not long ago. What ale they did possess had soured a little.
Either that, or it was a sour taste Erikk had on his tongue as he
drank that night.

He did understand the need to make a trade,
and soon, but he wasn’t a fool. Nature didn’t care how little mead
you had.