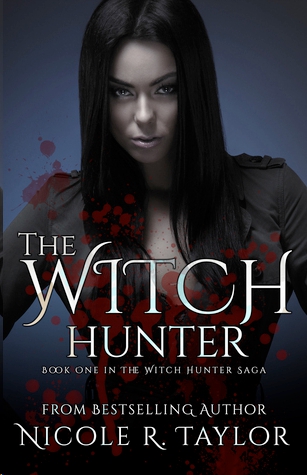 Book 1 in the Witch Hunter Saga

This book is a work of fiction and any resemblance to any person, living or dead, any place, events or occurrences, is purely coincidental. The characters and story lines are created from the author's imagination or are used fictitiously.

Z
ac was twenty-three when he died.

He was a Captain in the Confederate army until he was shot by a Union soldier. Captain Zachary Degaud. That was one hundred and forty seven years ago, in 1865. It was cold comfort that the civil war had ended shortly thereafter. Actually, it was like a punch in the face.

Today was his one hundred and seventieth birthday and he sat at the bar, in a dive posing as a respectable restaurant in the small southern town of Ashburton, Louisiana. The hole in the swamp where he was born a puny human being. But, the sun was shining, the liquor flowing and he was undead. Another binge drinking vampire, with an unremarkable story in the midst of the murky swampland of the south. Edward, Louis, Armand, Lestat. If these vampires existed, he hadn't met them.

"Happy Birthday, brother." A man slapped him on the shoulder and sat on the neighboring stool. Zac's younger brother Sam, just as dead as he was. Stuck together for eternity.

They were both dark haired and green eyed, but Zac took after their mother. He was tall and wiry while Sam was shorter by a head and more heavily built, like their father had been. Their parents had died shortly after the Civil War had ended and neither of them talked about that time anymore. It didn't do well to dwell on things they couldn't change.

He spent more time in the local bar than he did anywhere else. The alcohol helped curb the cravings typical for a creature that fed on human blood. He and Sam had returned to the town they had grown up in just over a year ago. Their nomadic life had done nothing but serve as a constant reminder of what they had become. Endless binge drinking, as Sam called it. But in Zac's case, a trail of bodies drained of their blood. It had done him good blending in with the humans; reconnecting with his old life.

"How does it feel to be a year older, old man?" Sam joked.

"I don't feel a day over twenty-three," he rolled his eyes. Like time mattered anymore.

They drank a few rounds before Sam stood and said, "That's my lunch break done. Gotta go back to the grind."

"I'll never understand why you got a job. It's not like we need the money." Their family had been extremely well off, owning a large plantation before they had died. One hundred and forty seven years of interest made them very wealthy vampires, but they didn't really need it.

"No, but you know it helps with the whole human thing," he whispered in his ear, conscious of the busy restaurant around them.

"Assimilation," he rolled his eyes.
Yeah, assimilating as a gardener
, he thought.

"Don't let the sun bite, Samuel," he muttered. The sun didn't bite. Searing agony was a more apt description. He met a witch once whom he convinced to spell them so they could walk in the day as well as the night. She spelt his body, but Sam was unconvinced and had taken a ring instead. Ended up, he had to go back and get a ring of his own. He resented having to rely on a flimsy piece of jewelry to stop him frying to a crisp. It wasn't until they ventured as far as Mexico that they found a brujas willing to help them, in return for a favor. The sun hadn't been a problem since.

Looking over his shoulder as Sam left he caught sight of Liz embracing his brother outside, kissing him on the lips. They looked perfect together. She was tall and lithe, long golden blonde hair, blue eyes. All American. Twenty-one years old and almost a year since she too had died. Sam had found her dead in the forest, until she woke up. They had both helped her through the change and her dietary adjustment was another story.

Zac couldn't tear his eyes from her. They had fought the way only brothers could over a pretty girl while she was still human. When she became... well, now it was different. She was his brother’s girl, but it didn't stop the fact that he cared for her more than he really ought to.

His line of sight was broken as a dark figure passed in front of him. Shaking his head, he turned back to his drink. Out the corner of his eye, he was aware of a dark shadow that loomed as if waiting for him to acknowledge its presence. Zac knew a man stood there and he knew that the man was a vampire. What unsettled him about it was that the man
wanted
him to know.

The stranger sat lithely beside him, his black leather jacket creaking as he lent forward, elbows resting on the bar. Zac didn't look at him straight away, instead downing the last of his glass of scotch, sliding the empty glass towards the bartender, who caught it and began refilling. He knew all to well that Zac wanted another.

Turning, he looked nonchalantly at the stranger. He was a typical vampire, really. He had a similar stature to Zac and a grace in his actions that betrayed to other vampires what he was. There was a hardness in his eyes that suggested he'd seen more than his years, exaggerated by the severeness of his close-cropped blonde hair. With his all black clothing and leather jacket, he looked totally out of place with the typical lunch crowd. That, and it was a humid cesspool outside.

"What do you want?" he sighed. In his short stint as one of the undead, he knew vampires did not deign to speak to one another unless they wanted something.

"I'm looking for a woman vampire. Black of hair, blue of eye," the stranger said smoothly, like he was from another time.

Zac laughed, "What are we, at a renaissance fair or something? Look buddy, if you want to blend in, maybe you should alter your language a little. It's a bit weird."

The stranger raised his eyebrows, "And who are you to speak to your elders in this way?"

He couldn't be surprised really, of course this guy was older. He hadn't met many that weren't. The older vampires were, the stronger they became, but that didn't mean they got any smarter. "I'm the one who has claimed this town," he sneered.

The vampire looked him up and down like he didn't believe him. "Then you will be able to answer my question. It would be better if you do, then we could avoid any trouble."

Zac knew a threat when he heard one; he'd given them out often enough. "Tell me who you are and I'll think about it."

The vampire laughed, "Either you're very stupid or very brave. I am Alistair Payne, and who are you?"

"And the answer to my question, Zachary? Have you seen this woman? It would be unadvisable to withhold her whereabouts."

"I'm the only vampire in these parts, so your answer would be no," he shrugged. "Did your girlfriend hurt your big bad vampire feelings?"

"Oh, come now, Zachary. I saw two outside not a moment ago. Do you really think I'm that stupid?" Alistair said. "She's wanted for crimes against her own kind."

"What are you, the vampire police?" He couldn't help it.

"Keep prodding,
vampire
, and we will see how stupid you really are," Alistair growled.

Zac had no idea who this vampire he was looking for was and didn't really care. There were no other vampires in this town. "I have no idea who this woman is. She's not here, not unless she's turned up in the past day. No one here fits that description who is supernatural or otherwise."

He looked at Zac, trying to gauge the truth in his words. He didn't dare look away from the vampire’s hard gaze. Even though he was telling the truth, it would be taken as an admission of guilt regardless. Except he couldn't help himself and turned back to his drink a little too soon.

Alistair smiled. Except this time, it was a smile full of malice. "One thing I have plenty of is time. I'll be seeing you again, Zachary Degaud. Sooner than you think."

He watched Alistair's receding form and grimaced. He was in trouble. A shitload of it.

Muted grey afternoon light filtered through the tops of the tall pines as Liz made her way through the trunks to her and Sam's regular meeting place. It wasn't far from here where Sam had found her that day, when she had died. They had been friends for months before, but it wasn't until she woke up, that she knew that Sam and his brother Zac, were vampires. And that she was becoming one, too.

She never knew who had turned her and left her for dead, it wasn't like they hadn't tried to find out, but they hadn't been able to find any clues at all. Liz had never doubted them when the brothers had sworn that they hadn't turned her themselves. It was no secret that they had a friendly rivalry over her affections when they had first moved to Ashburton, but they'd never take it that far. Especially since they had both been turned against their will, too.

Liz stood in the dappled sunlight, waiting. She smiled softly to herself when she saw Sam's dark form flashing through the trees. He was fast, and before she could dodge him, he grabbed her around the waist and swung her around, laughing.

"Hello, beautiful," he grinned, kissing her lightly on the lips. "Are you ready?"

The forest was their special place. They had spent many hours out here hunting together, Sam teaching her how to use her vampire strength to her advantage. They only fed on the blood of animals, both in agreement that they didn't like the feeling it gave of being predators. There were other ways. Zac didn't agree with their choice, so left them to wander the forest eating 'bunnies and fluffy kittens' as he put it. But, Zac had taught her control when it came to being around humans, which was much more difficult than she had thought it would be.

Catching the scent of deer, she tapped Sam on the arm, motioning to her right. He nodded and darted off silently, to circle around, leaving her to stalk them head on. Just as he had taught her.