Read The Witch in the Well: A Catherine LeVendeur Mystery Online

The Witch in the Well: A Catherine LeVendeur Mystery 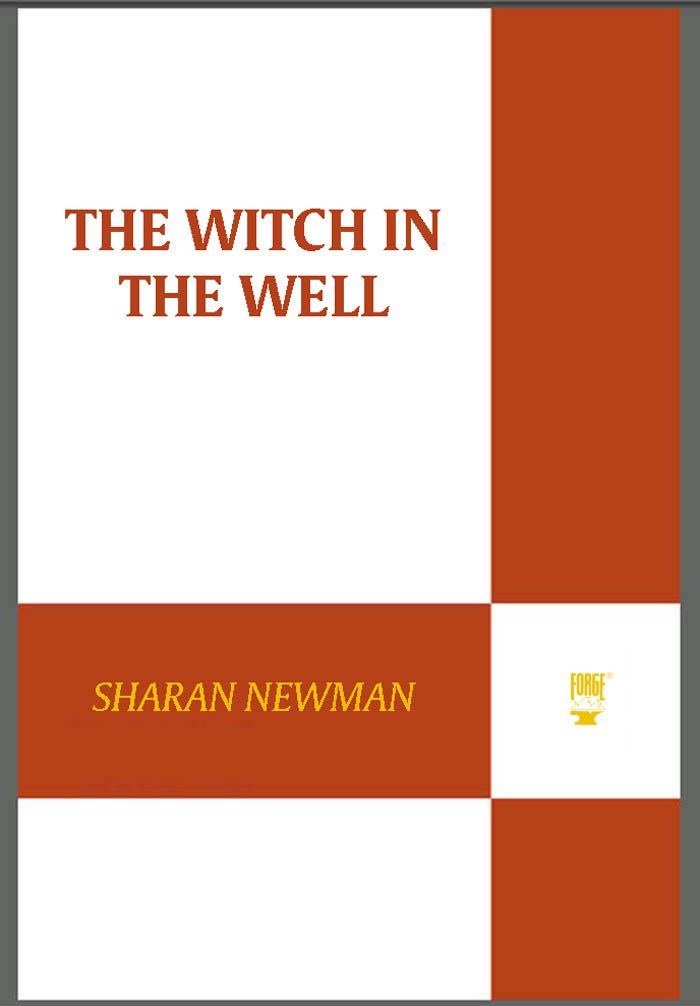 Cursed in the Blood

To Wear the White Cloak Heresy

THE WITCH IN THE WELL

Illustration on page 319 by Lisa Newman

Forge® is a registered trademark of Tom Doherty Associates, LLC.

Library of Congress in Cataloging-in-Publication Data

The witch in the well / Sharan Newman.—1st ed.

For Edgar,
without whom Catherine would not have survived

The keep at Vielleteneuse, near Saint-Denis. Tuesday 3 ides August (August 9) 1149. Feast of Saint Alexander, burnt at the stake in 295, patron saint of charcoal burners. 28th Av 4909.

I’m going to tell you a tale of an adventure:

Don’t believe it’s only a story,

I
t was the hottest summer in living memory. Blind Garna said so and no one doubted her. She had been the midwife for every soul now alive in the village. She swore that it was worse even than the year the crops had all shriveled to dust before the vigil of the Feast of Saint James when the forest had spontaneously burst into flame.

The heat sucked moisture from men, animals, plants, the earth itself. The summer spared no one, from village hut to castle.

Marie, lady of Vielleteneuse, yawned over her embroidery. After a week of working on it, the blue and yellow flowers on the green linen seemed insipid. The material crumpled under her perspiring hands and the needle kept slipping from her fingers. She looked over at her husband’s sister, Catherine, hoping for sympathy. But Catherine was poring over some musty parchment, apparently unaware of the heavy air.

Suddenly, Marie sat bolt upright. From below their tower the afternoon lethargy was cut by shouts and cries of anger. They were being attacked! She heard the shouts of the guards as they tried to stop the invaders. The clanking of metal against wood echoed harshly up the spiral staircase.

Startled from her reading, Catherine looked up. The noise was coming closer. She realized that the troop had managed to get past the guards and was even now climbing the narrow steps to the solar.

“Marie!” Catherine called a warning to her sister-in-law. “They’re coming!”

“I have ears,” Marie answered. She put her embroidery safely back in its box. “Are you ready?”

Catherine shook her head as she hid the parchment under a cushion. “There are too many for me!”

She ran to the window to call for help but it was too late. The hordes were upon them.

Marie stood proudly, her hands on her hips, defying them to attack.

“Not one of you touch me until you’ve washed!” she ordered the intruders as they burst into the room. “Hubert, put down that stick before you fall on it! Beron, stop poking your brother! Ma-bile, just what have you been eating? Evaine, give the baby to your aunt. Why did you run away from your nursemaids?”

Gingerly, Catherine reached out her arms and took her youngest child, Peter, from her niece. He was as filthy as the others, his tunic stained with grass, mud, and, she sniffed, probably horse dung, although it might be his own. At only a bit past the age of one, Peter wasn’t about to look for a chamber pot.

Her other two children, James and Edana, were somewhere amidst the cluster of cousins. Catherine didn’t even try to identify them under the muck. She held Peter out at arm’s length. The child let out a hungry wail. Catherine sighed and set him down long enough to strip off his short tunic before she nestled his naked body against the slit in her clothing. Peter relaxed at once and sucked eagerly at her breast.

“He’s still getting mud all over you,” Marie observed. “That’s what comes of not getting a wet nurse.”

Catherine shrugged. She’d heard the argument before, but all the authors she had consulted said that a child could ingest weakness and unwholesome traits if fed by a hired woman. Nursing him herself was sometimes inconvenient, but necessary to the moral development of her son. And, although she knew Marie would laugh, Catherine loved being able to hold Peter, to snuggle his solid, healthy body against her. It was worth a bit of grime.

“We’ll have to change, anyway,” she reminded Marie, “if my brother is bringing back his hunting party to be fed tonight.”

“They’ll get cold chicken and trout pies unless they’ve brought down a deer,” Marie answered. “Yes, I know. I suppose I should see what else the cooks have come up with. There are berries enough and greens, I suppose. Although who would want to eat in this heat, I can’t imagine. Now,” she returned to the children, “Evaine, get these wild animals back to their nurses to be washed and dressed. Beron and James, don’t forget you are to help serve tonight.”

The two six-year-olds were hopping with excitement. After much pleading, they had convinced their parents that they were old enough to carry the hand towels and small trays of
sweetmeats at dinner. They had been practicing all week and spent their idle hours speculating on how much they could snitch from the platters.

Catherine finished feeding the baby, who had fallen asleep. She held him until the nurse finally appeared to clean and dress him again. As he lay in her lap, she let her fingers play in his soft curls, golden as summer wheat. He seemed so sturdy, but Catherine knew how fragile children were. She had lost one at birth and another to a winter ague. No sacrifice was too great to ensure their safety.

With a sigh, Catherine gave her youngest into the nurse-maid’s care and resigned herself to an evening in tight sleeves, hot slippers, and an elaborate headdress. It was the price she paid for spending the summer out of the miasma of the Paris air. Vielleteneuse was a small town well north of the city. Even though it was on an important roadway, hence the need for a fortified castle, it was cooler and quieter than Paris, with healthy breezes to sweep away foul humors that could cause sickness. At least it had been until this suffocating heat had settled in.

Still, she thought, as she stood impatiently later that afternoon waiting to be fitted into her sleeves, it would be nice if the price for the children’s safety didn’t include heavy, elegant robes.

Elegance was Catherine’s main objection to life at Vielleteneuse. She wouldn’t mind living in the castle if her brother, Guillaume, didn’t take his position so seriously. Although their father had been only a merchant, Guillaume had been raised at the castle of their maternal grandfather, Gargenaud. The lords of Boisvert were very minor nobility in terms of property, but they had the pride that comes with knowing that not only had their ancestors fought with Charlemagne, but that they were able to name the links of that lineage all the way down to the present, almost four hundred years later.

Guillaume intended that he and his children live up to that heritage. His oldest son, Gerard, was now a page in the household
of the count of Vermandois, regent of France. The boy was home for a visit until Saint Matthew’s Eve and Guillaume took every possible opportunity to show him off to friends, neighbors, and important visitors.

Although much less concerned with position than Guillaume, Catherine’s husband, Edgar, had encouraged her to pass the worst of the summer at the castle.

“It’s time our children learned how to behave properly,” he had told her. “And speak. They sound like the urchins in the streets of Paris. Half the time I can’t understand what they’re saying, their speech is so slurred and full of
parleroie de vilain
.”

The Wicked and the Wondrous by Christine Feehan
Filthy Wicked Games by Lili Valente
Brand Me (Imagine Ink Book 2) by Verlene Landon
The Fight for Love (Contemporary Romance) by Goldman, Kate
Other Earths by edited by Nick Gevers, Jay Lake
Dunc and the Flaming Ghost by Gary Paulsen
Battle of the Network Zombies by Mark Henry
The Wicked Go to Hell by Frédéric Dard
The Earl's Bargain (Historical Regency Romance) by Cheryl Bolen
The Alien by Josephine Bell
Our partner