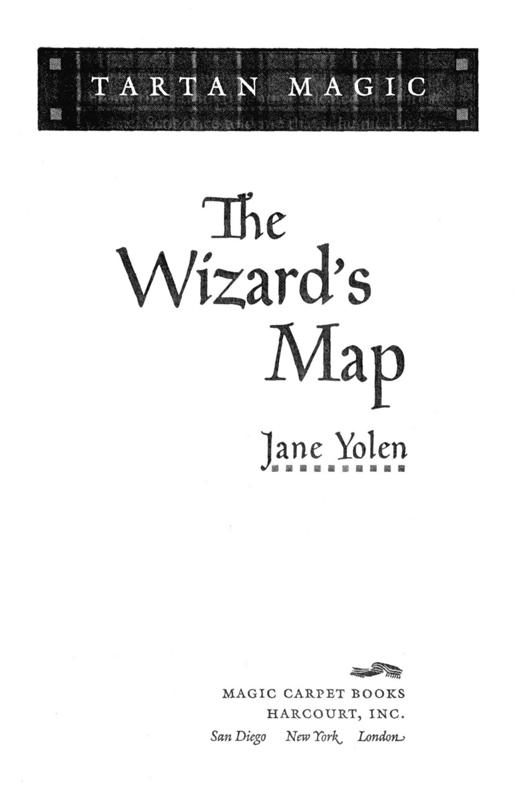 For Jenny and Gordon McIlreavy
and their parents,
part of our Scottish sojourn

Requests for permission to make copies of any part of the work should be mailed to the following address: Permissions Department, Harcourt, Inc., 6277 Sea Harbor Drive, Orlando, Florida 32887-6777.

Magic Carpet Books
is a trademark of Harcourt, Inc., registered in the United States of America and/or other jurisdictions.

The Library of Congress has cataloged the hardcover edition as follows:
Yolen, Jane.

Tartan:
Plaid cloth.
In Scotland each clan
has its own distinctive pattern.

Are we almost there?” Jennifer asked for what must have been the hundredth time.

“Honestly,” Mom said, “the one thing you kids don't seem to have is any patience. We'll be there soon enough.”

They went around a deep bend in the rain-slick road and only Molly, asleep in her car seat, seemed oblivious to the swervings of the car.

Then Peter asked the same question, only he said it slightly differently. “Are we there yet?”

“I hate to repeat myselfâ” Mom began, but Pop interrupted her by pointing out the befogged car window at a sign that read
FAIRBURN.
It was a dangerous thing to do, since he was driving on the left side of the road for the first time. “There it isâFairburn.”

Jennifer looked out of the window to where stone walls seemed to anchor the fields. The few trees stood like green sentinels before a grey outcropping of rock. All were drenched with the rain.

“That hill?” asked Peter. “That's Fairburn?” His voice held as much scorn as a thirteen-year-old could muster. He hadn't come happily across the Atlantic to Scotland for the summer, leaving his friends and teammates behind.

“Don't be silly,” Jennifer said. As Peter's twin, she was allowed to say such things but rarely did. He was the more aggressive of the two, having entered the world with an angry yell, while sheâor so her mother always saidâhad slid out quietly, smiling. “That's where it all begins.”

By “all,” Jennifer merely meant the little town at the foot of the Highlands, and their summer away from Connecticut. What she didn't know was that this was also the beginning of an adventure that would take them through the dark turnings of a wizard's cave and into Time itself.

“Tidy yourselves,” Mom said, moving comfortably back into the rhythms and slang of her Scottish childhood. “I want Gran and Da to have a fine first impression of you.”

Gran and Da weren't Mom's real grandparents. They were actually some older cousins who had helped raise her after her own parents had died in a car crash. In fact they were the
only
family Mom still had. She phoned them once a month, but had only been back to visit a couple of times since moving to America to go to college. And that, Jennifer knew, had happened an awfully long time ago.

Jennifer never really listened closely to her mother's stories about the dead Douglas side of the family, preferring to hear about the living. Therefore she knew much more about her father's relatives, especially Granny and Granfa Dyer, who lived only three states away and had built Peter and Jennifer and Molly a medieval castle out of wood painted to look like stone, big enough for three children to stand up in and gaze out over the towers.

Only four-year-old Molly still played in the castle, of course, moving her dolls in and out for regular royal tea parties and wearing one of Granfa Dyer's cardboard crowns atop her dark curls. Jennifer sometimes wished that she could still participate in their old make-believe games; only, she knew that if she did, Peter would laugh at her. Peter and all his friends. Since she desperately wanted them to think well of her, she'd left the castle and her dolls behind.

As the car shot by the hillâwhich was marked with a sign warning about slippery conditions in the rainâPop floored the gas pedal. That sent the car careening around a curve, and for several perilous seconds it hugged the right side of the road. Then when the road suddenly straightened, Pop appeared to remember they were in Scotland and he pulled the wheel abruptly to the left.

Jennifer let out a little shriek and Mom moaned, but Peter merely shrank down inside himself further than he'd been before, as if he were more embarrassed than scared. They were all so busy reacting to the car's erratic movement that they were startled when the actual town of Fairburn rose up ahead of them, a grey presence in the slackening rain. It seemed surrounded by a stone wall and looked like a medieval fortress in a movie.

“Rob Roy”
Peter corrected. He was closer to the right century. Except most of Fairburn's wall had tumbled down ages earlier, and only the West Gate and a few sections still remained.

Half a dozen Japanese tourists, dressed in waterproof coats and hats, were standing on the fallen-down part of the wall, busily snapping photos of one another. Two young men in colorful kilts and short dark jackets, their knees well burnished by the cold rain, strolled by.

“Bet that will keep out any enemies,” Peter said sarcastically.

“What will?” asked Jennifer.

Peter was about to answer her back with some sharp, quick, petulant response, when Mollyâwho'd been drowsing since they left Edinburgh Airportâwoke up in the car seat with a start.

And there, over all of Fairburn, was a sudden fantastic rainbow enclosing the town as gracefully above as the wall did below. The rainstorm, it seemed, was over.

Molly was the only one who smiled.

They turned down a street with the strange name of Burial Brae, and then right onto another much narrower road with as odd a nameâDouble Dykes. The car bumped unrelentingly over the cobblestones until Jennifer thought her teeth would fall out from the pounding. At last Mom gave a litde screech.

“There” was a lane marked
ABBOT'S CLOSE.
Jennifer recognized it at once, having written the address down for all her friends a dozen times: Scot's Cottage, 13 Abbot's Close, Fairburn, Fife, Scotland. Mom had explained that Fife was like a state but was called a kingdom so Jennifer had told all her friends that she was spending the summer in a cottage in a Scottish kingdom, and they'd all been suitably impressed.

But when the car pulled up to number 13, it was not anything like a cottage at all. Rather it was an enormous, whitewashed, two-story building with a small window in the attic and a grey slate roof that slumped like a farmer's hat.

“I thought a cottage was something small and cozy...” Jennifer began.

“Or with two rooms and a big fireplace,” added Peter. It often happened that they had similar ideas about things.

But Molly said what they had all been thinking ever since spotting the house. “Magic!” she breathed.

Just as Molly spoke, the door opened and two people walked out, their arms opened wide in welcome.

“Well, who else would it be,” Peter mumbled, and Jennifer elbowed him hard. He was so surprisedâfor Jennifer was usually the compliant oneâthat he didn't protest, but shut up at once.

Gran and Da had round faces, browned and seamed from the sun, topped with hair as flat white as the walls of their cottage. Gran was wearing a long greenish tartan skirt and a sweater set, Da heavy brown trousers, a plaid shirt, and a tweed jacket.

“They look like Niddy and Noddy,” Molly said. She meant they looked like her Scottish dolls, the ones that went in and out of Granfa Dyer's casde a dozen times a day. And except for the color of their hair, she was right.

“That's the Douglas plaid,” said Jennifer, remembering the gifts that Gran had sent ahead to them.

“Well, don't expect me to wear it,” Peter remarked sullenly, to the entire car.

But Mom ignored them all, throwing open her door and running into Gran's and Da's arms as a child would. They did not seem startled by her buoyant enthusiasm, but covered her face with kisses.

“I thought,” Pop said slowly, “that the Scots were supposed to be a reserved people.”

Suddenly, as if remembering that she was a grown-up, Mom led Gran and Da over to the car. Opening the back door, she got Molly out of the car seat and held her up to Da, who took her in his arms. “Look at those curls, that heart-shaped face. Whyâshe's the spit of your mum.”

Peter grunted and put out his hand to forestall any kisses. Da shook it with his free hand, but Gran ignored Peter's hand and smothered him in her arms.

Jennifer got out of the car herself and stood quietly, smoothing down her sweater. “I'm Jennifer,” she said.

“She looks like you did at her age,” said Da to Gran. “The straight red hair falling over her eyes. There's magic in those green eyes. Magic.”

Jennifer suddenly felt terribly uncomfortable. It was one thing for someone Molly's age to speak of magic. She was just four years old, after all. That sort of thing was expected. But for a grownup to talk about magic so matter-of-facdy was plain embarrassing.

Jennifer looked over at Peter, hoping to catch his eye. But he was too busy stalking down the road, trying to get his equilibrium back, to notice. He hated being hugged, especially by strangers, and it might take him a five full minutes of walkabout, which is what Pop called it, before he was sociable again. So Jennifer did the only thing she could do in the circumstancesâshe looked down at the cobblestones and blushed.

“And she takes a compliment like you do, too,” Da said. “That's a braw blush, like a rose.”

They laughed, and Mom and Pop unaccountably laughed with them. Jennifer thought with sudden misery that grown-ups could always be counted on to make a joke at a kid's expense, and she turned on her heel, following Peter down the road. The grown-ups' laughter, like a shadow, trailed behind.

When she was too far away to be heard by the others, Jennifer called out in a strained voice, “Peter! Peter! Wait!”

He didn't stop, but he did slow down so that she could catch up. She noticed that his normally ruddy face was blanched. He looked the way he did when he was coming down with a fever: drawn and white.

For a while they walked side by side in silence along the cobbled lane. Not even the wind troubled the trees. Jennifer thought suddenly,
This
sure isn't Connecticut.
She didn't know anyplace in America quite this quiet. Straining to hear some ordinary sound, she finally smiled when at last she heard the far-off yapping of a dog.

“Peter,” she said again, this time in her normal voice.

He turned and looked at her, and his face seemed suddenly older, unfamiliar, dark with unexpressed emotion. Jennifer shuddered without meaning to. Then, as if a wing, or the shadow of a wing, had passed across him, his face lightened, color flooded back into it, and he drew his right hand through his lank brown hair.