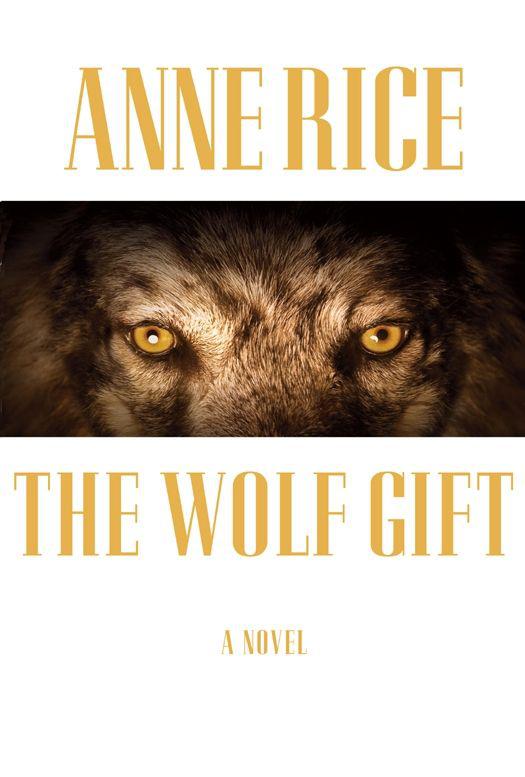 Of Love and Evil
Angel Time
Called Out of Darkness
Christ the Lord: The Road to Cana
Christ the Lord: Out of Egypt
Blood Canticle
Blackwood Farm
Blood and Gold
Merrick
Vittorio, The Vampire
The Vampire Armand
Pandora
Violin
Servant of the Bones
Memnoch the Devil
Taltos
Lasher
The Tale of the Body Thief
The Witching Hour
The Mummy
The Queen of the Damned
The Vampire Lestat
Cry to Heaven
The Feast of All Saints
Interview with the Vampire 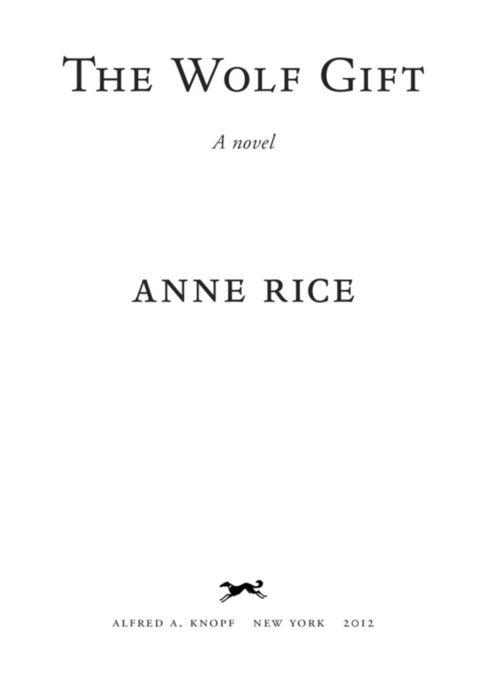 Copyright © 2012 Anne O’Brien Rice
All rights reserved. Published in the United States by Alfred A. Knopf, a division of Random House, Inc., New York, and in Canada by Random House of Canada Limited, Toronto.
www.aaknopf.com

This novel is dedicated
to
Christopher Rice
,
Becket Ghioto
,
Jeff Eastin
,
Peter and Matthias Scheer
,
and the
People of the Page

Say what you will to the force that governs the
universe. Perhaps we’ll call it into being, and it
will yet love us as we love it
.

R
EUBEN WAS A TALL MAN
, well over six feet, with brown curly hair and deep-set blue eyes. “Sunshine Boy” was his nickname and he hated it; so he tended to repress what the world called an irresistible smile. But he was a little too happy right now to put on his studious expression, and try to look older than his twenty-three years.

He was walking up a steep hill in the fierce ocean wind with an exotic and elegant older woman named Marchent Nideck and he really loved all she was saying about the big house on the cliff. She was lean with a narrow beautifully sculpted face, and that kind of yellow hair that never fades. She wore it straight back from her forehead in a soft wavy swinging bob that curled under just above her shoulders. He loved the picture she made in her long brown knit dress and high polished brown boots.

He was doing a story for the
San Francisco Observer
on the giant house and her hopes of selling it now that the estate had at last been settled, and her great-uncle Felix Nideck had been declared officially dead. The man had been gone for twenty years, but his will had only just been opened, and the house had been left to Marchent, his niece.

They’d been walking the forested slopes of the property since Reuben arrived, visiting a ramshackle old guesthouse and the ruin of a barn. They’d followed old roads and old paths lost in the brush, and now and then come out on a rocky ledge above the cold iron-colored Pacific, only to duck back quickly into the sheltered and damp world of gnarled oak and bracken.

Reuben wasn’t dressed for this, really. He’d driven north in his usual “uniform” of worsted-wool blue blazer over a thin cashmere sweater, and gray slacks. But at least he had a scarf for his neck that he’d pulled from the glove compartment. And he really didn’t mind the biting cold.

The huge old house was wintry with deep slate roofs and diamond-pane windows. It was built of rough-faced stone, and had countless
chimneys rising from its steep gables, and a sprawling conservatory on the west side, all white iron and glass. Reuben loved it. He’d loved it in the photographs online but nothing had prepared him for its solemn grandeur.

He’d grown up in an old house on San Francisco’s Russian Hill, and spent a lot of time in the impressive old homes of Presidio Heights, and the suburbs of San Francisco, including Berkeley, where he’d gone to school, and Hillsborough, where his late grandfather’s half-timbered mansion had been the holiday gathering place for many a year. But nothing he had ever seen could compare to the Nideck family home.

The sheer scale of this place, stranded as it was in its own park, suggested another world.

“The real thing,” he’d said under his breath the moment he’d seen it. “Look at those slate roofs, and those must be copper gutters.” Lush green vines covered over half the immense structure, reaching all the way to the highest windows, and he’d sat in his car for a long moment, kind of pleasantly astonished and a little worshipful, dreaming of owning a place like this someday when he was a famous writer and the world beat too broad a path to his door.

This was turning out to be just a glorious afternoon.

It had hurt him to see the guesthouse dilapidated and unlivable. But Marchent assured him the big house was in good repair.

He could have listened to her talk forever. Her accent wasn’t British exactly, or Boston or New York. But it was unique, the accent of a child of the world, and it gave her words a lovely preciseness and silvery ring.

“Oh, I know it’s beautiful. I know it’s like no place else on the California coast. I know. I know. But I have no choice but to get rid of all of it,” she explained. “There comes a time when a house owns you and you know you have to get free of it, and go on with the rest of your life.” Marchent wanted to travel again. She confessed she’d spent precious little time here since Uncle Felix disappeared. She was headed down to South America as soon as the property was sold.

“It breaks my heart,” Reuben said. That was too damn personal for a reporter, wasn’t it? But he couldn’t stop himself. And who said he had to be a dispassionate witness? “This is irreplaceable, Marchent. But I’ll write the best story I can on the place. I’ll do my best to bring you a buyer, and I can’t believe it will take that long.”

What he didn’t say was
I wish I could buy this place myself
. And he’d
been thinking about that very possibility ever since he’d first glimpsed the gables through the trees.

“I’m so glad the paper sent you, of all people,” she said. “You’re passionate and I like that so very much.”

For one moment, he thought, Yes, I’m passionate and I want this house, and why not, and when will an opportunity like this ever come again? But then he thought of his mother and of Celeste, his petite brown-eyed girlfriend, the rising star in the district attorney’s office, and how they’d laugh at the idea, and the thought went cold.

“What’s wrong with you, Reuben, what’s the matter?” asked Marchent. “You had the strangest look in your eye.”

“Thoughts,” he said, tapping his temple. “I’m writing the piece in my head. ‘Architectural jewel on the Mendocino coast, first time on the market since it was built.’ ”

“Sounds good,” she said. There was that faint accent again, of a citizen of the world.

“I’d give the house a name if I bought it,” said Reuben, “you know, something that captured the essence of it. Nideck Point.”

“Aren’t you the young poet,” she said. “I knew it when I saw you. And I like the pieces you’ve written for your paper. They have a distinct character. But you’re writing a novel, aren’t you? Any young reporter your age should be writing a novel. I’d be ashamed of you if you weren’t.”

“Oh, that’s music to my ears,” he confessed. She was so beautiful when she smiled, all the fine lines of her face seemingly so eloquent and pretty. “My father told me last week that a man of my age has absolutely nothing to say. He’s a professor, burnt out, I might add. He’s been revising his ‘Collected Poems’ for ten years, since he retired.” Talking too much, talking too much about himself, not good at all.

His father might actually love this place, he thought. Yes, Phil Golding was in fact a poet and he would surely love it, and he might even say so to Reuben’s mother who would scoff at the whole idea. Dr. Grace Golding was the practical one and the architect of their lives. She was the one who’d gotten Reuben his job at the
San Francisco Observer
, when his only qualification was a master’s in English literature and yearly world travel since birth.

Grace had been proud of his recent investigative pieces, but she’d cautioned that this “real estate story” was a waste of his time.

“There you go again, dreaming,” Marchent said. She put her arm
around him and actually kissed him on the cheek as she laughed. He was startled, caught unawares by the soft pressure of her breasts against him and the subtle scent of a rich perfume.

“Actually, I haven’t accomplished one single thing in my life yet,” he said with an ease that shocked him. “My mother’s a brilliant surgeon; my big brother’s a priest. My mother’s father was an international real estate broker by the time he was my age. But I’m a nothing and a nobody, actually. I’ve only been with the paper six months. I should have come with a warning label. But believe me, I’ll make this a story you’ll love.”

“Rubbish,” she said. “Your editor told me your story on the Greenleaf murder led to the arrest of the killer. You are the most charming and self-effacing boy.”

He struggled not to blush. Why was he admitting all these things to this woman? Seldom if ever did he make self-deprecating statements. Yet he felt some immediate connection with her he couldn’t explain.

“That Greenleaf story took less than a day to write,” he murmured. “Half of what I turned up on the suspect never saw print at all.”