Read The Women in the Walls Online

The Women in the Walls 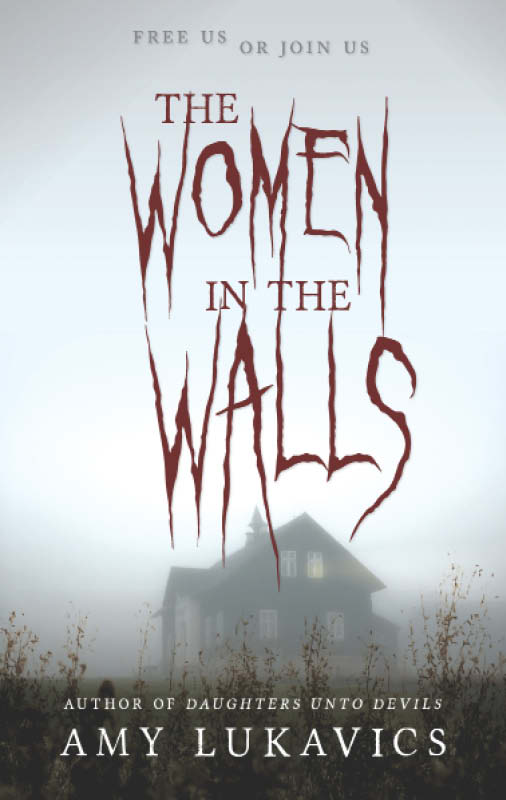 Lucy Acosta's mother died when she was three.

Growing up in a Victorian mansion in the middle of the woods with her cold, distant father, she explored the dark hallways of the estate with her cousin, Margaret. They're inseparableâa family.

When her aunt Penelope, the only mother she's ever known, tragically disappears while walking in the woods surrounding their estate, Lucy finds herself devastated and alone. Margaret has been spending a lot of time in the attic. She claims she can hear her dead mother's voice whispering from the walls. Emotionally shut out by her father, Lucy watches helplessly as her cousin's sanity slowly unravels. But when she begins hearing voices herself, Lucy finds herself confronting an ancient and deadly legacy that has marked the women in her family for generations. 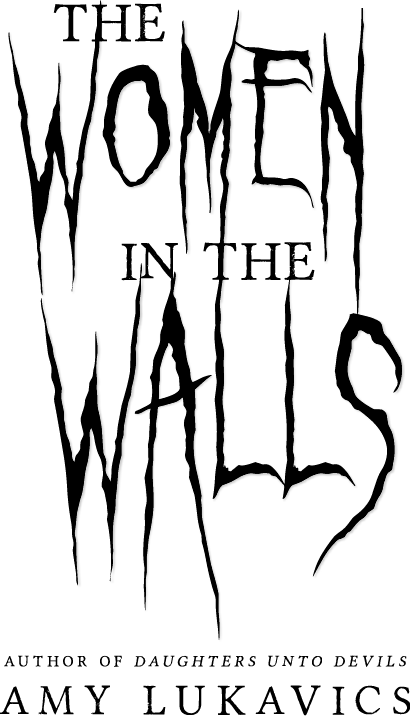 For Roxie, who has peered beyond the walls
of my very weird brain and still loves me anyway,
and for Joanna, who is always quick to point out my strengths
when I've forgotten what they are.

EXCERPT FROM
DAUGHTERS UNTO DEVILS
BY AMY LUKAVICS

WALTER THE COOK
killed himself in his little bedroom downstairs, just a few hours after saying good-night.

“Have sweet dreams tonight, little Lucy,” he said to me that night, just as I was heading up the stairs after dinner. He'd called me “little Lucy” ever since his first day at the estate, and never really stopped after that. “I'll make you and Miss Margaret some eggs Benedict in the morning.”

The more I think about it, the less sense it makes. What possibly could have happened in that time?

I'm the one who found him, but I can't really talk about it with my father, or my cousin Margaret, or my aunt Penelope. Nobody wants to know about the color of Walter's face after he'd been hanging from the beam for hours, the buckle of his black leather belt hardly visible through the swollen puffs of flesh that billowed around it. Or about how his hands looked like latex gloves filled with a lumpy sort of liquid. Or about how awful the room smelled from the mess he'd left in a splattered puddle directly beneath his shoes, his toes pointed to the floor like a dancer's.

Walter made every birthday cake I've had since I was four years old, every holiday dinner, every sick-day soup. Without any family of his own, he'd simply become a part of ours. Even Margaret loved him, which says a lot.

Regardless, nobody wants to linger on the details when it's easier to move forward as if they're rumors instead of memories. That's how it's always been here, I guess. So ever since I found Walter dead, I've been acting as if nothing happened, even though on the inside I'm beginning to unravel, slowly, like a thread being pulled painstakingly from its spool.

Something isn't right in this house.

From the road, there is a narrow dirt path that snakes through trees and shrubs until it ends at a black iron gate with spiked posts that reach nearly twenty feet high. From there, a wide cobblestone path leads itself down the side of the manicured courtyard, then to the house that stands behind it at three full stories tall. There are fourteen bedrooms total.

The harsh appearance of the stone walls is softened by sweeping curtains of ivy that are draped over the sides of the house like a cape. The roof is laid with beautiful red tile, and the accents around the windows and doors are made from black iron, like the fence. Beyond the open land that's sprawled behind the courtyard, there is a pine forest that stretches out and up into the rocky gray cliffs of the mountains.

It's a historical landmark, an estate of dreams that's been in my family for generations.

A few days after Walter's death, my aunt Penelope calls me into her bedroom while Margaret is taking a bath upstairs. Once I'm inside, she asks me to close the door. The inside of the room is a weird balance of messy and neat; the flowered bedspread is pulled smoothly over the mattress, but there are random stacks of dust-covered books all over the plush carpet, likely from the library on the second floor. Penelope is always reading one thing or the other.

“How are you doing?” she says, patting the bed next to her. Her face is relaxed, as if she's just had a few glasses of wine. I sit, slowly breathing in the scent of her lemongrass hand lotion. I love Penelope as much as I would have my own mother, if she hadn't died when I was three. The black hole of grief that should have bloomed inside me never had much time to develop or take hold, since my aunt moved herself and Margaret in within a few months to help my father take care of me. She filled the maternal role effortlessly, instantly.

I love her more than I love my father.

“Okay,” I say, my smile forced. Penelope frowns at the sight of it.

“I know it couldn't have been easy on you, finding Walter like that.” She lets out an irritated sigh. “It's not fair that it was you. I'll never forgive him for that.”

I want to say that maybe it's we who need to be forgiven, not Walter, but I can't find a way how.

“I just don't understand
why
,” I croak, my eyes growing hot. “Why would he do that in the first place? I thought he was happy here with us.”

“People can be happy and sad at the same time,” my aunt says. “Sometimes the sad parts just spiral out of control.”

I wonder why she didn't talk to me about this sooner, like the day it happened, when I needed to hear it the most. Then I feel an instant, searing guilt for expecting her to coddle me so much; Aunt Penelope would never whine to someone else like this, bore them with her personal issues.

For an Acosta must never lack control. She must keep her back straight, and her clothes ironed, and her expression placid. She must refuse to be seen unless her hair and makeup have been set. She wears her armor like scales on a snake: patterned, impervious, perfect. She understands that smiling is tactical, that words are for getting things that you want, that tears have no use except to expose disgusting, snotty shortcomings.

“Well, it had to be someone that found him,” I say, shifting my weight on the mattress. “I'll get over it.”

“Sure, of course,” she responds. Her dark braid hangs over her shoulder, nearly reaching her stomach. According to the photos I've seen, Penelope and my mother looked a whole lot alike. “I just want you to know I'm here for you, all right?”

Penelope reaches her arm around me, pulls me close. After a moment of resistance, I give in and lean my head against her shoulder. The scent of her sweater is sweet and clean from laundry softener.

“Everything's all right,” she says softly. “Don't you worry about a thing.”

I wish she was like this more often, like how she was when I was young. The past few years she's been colder and more distant, especially around me and Margaret. I'm starting to wonder if the stresses of the club are finally getting to her.

It's just a stupid country club
, I think for probably the millionth time in my life.
How did it get to be as important to her as it is?
And it's not just Penelope who practically worships this lifestyle, but my father, as well. They're both always scrambling to keep up with the game of showcasing themselves at all the lavish dinners and cocktail hours, endless moments of opportunity to prove just how perfectly everything in their life is going.

It's all lies, of course.

The girl lives in a beautiful dollhouse made of stone
, I wrote one time in my diary when I was young, my handwriting shaky but sure.
But underneath her shining plastic smile, there are only screams.

“I've got to go,” I say suddenly, standing and pulling myself away from my aunt's embrace. “I wanted to clean up my room before our tutor arrives.”

“That's fine,” Penelope answers. “I love you, Lucy.” She hasn't said it in months.

“Love you,” I say, the words soapy from disuse. I've always wondered what it would be like to use the phrase freely, without hesitation or embarrassment, especially because of how much I truly love my aunt.

Without another word, I go out through the front parlor and head up the wide staircase to the second floor, where my bedroom sits adjacent to Margaret's. The light coming from beneath the bathroom door tells me that my cousin is still bathing. Good. I need to be alone right now.

Once my bedroom door is locked behind me, I take a deep breath and head over to the decorated cigar box that sits in plain sight on the shelves surrounding my vanity. I take it down and bring it with me to my bed.

Whenever my brain goes bad from all the Acosta pressure, and the expectations gather and gather until they're ready to bubble over and stain everything with their mess, this box saves me. I made and started using it years ago, when I was maybe ten. Whenever anything bad happened after that, the box was able to fix it, make sure I remembered that I was still here, in this house, alive. In my head, I call it my magic box.

And, more recently, when Margaret asked me what was inside it, I showed her.

I showed her the inside of the box, which was filled with razors and lighters and pins. I showed her the frenzied tallies on my upper thighs that counted each and every word that I was never allowed to speak, every whimper that had to be muffled by the back of my arm, every question I wanted to ask but knew would only be met with silence and a change of subject.

And I showed her how I open my skin instead of my mouth, let the wounds weep blood while my eyes stay dry.
It's soothing
, I told Margaret.
It helps keep things dead inside when everything is too much to handle.
It isn't pretty or poetic, I made sure she knew.
It's just me doing my best.

“But what if you cut too deep?” Margaret asked back then, eyeing the thicker, darker scars among the newer, redder ones. Their number was always rising, five, ten, fifteen, twenty. “What if you take it too far?”

I stared into her eyes as if the answer was obvious. “Well, then,” I said without blinking. “If I take it too far, I guess that means I get to stop counting.”

We never talked about it again.

Sometimes things just
are
, and all that's left to do is exist in spite of them.

“Sure,” I call to my cousin through the still-locked door, returning the jeweled cigar box to its place on the shelf. The bandage across the back of my knee is hot and wet beneath my black leggings. “I'll be right there.”

Redemption's Warrior by Jennifer Morse and William Mortimer
Inevitable Sentences by Tekla Dennison Miller
As Berry and I Were Saying by Dornford Yates
One Love by Emery, Lynn
Pep Guardiola: Another Way of Winning: The Biography by Balague, Guillem
Ill Will by J.M. Redmann
Moyra Caldecott by Etheldreda
Julius and the Soulcatcher by Tim Hehir
The Lies of Fair Ladies by Jonathan Gash
The Theoretical Foot by M. F. K. Fisher
Our partner