Read The World Is the Home of Love and Death Online

The World Is the Home of Love and Death 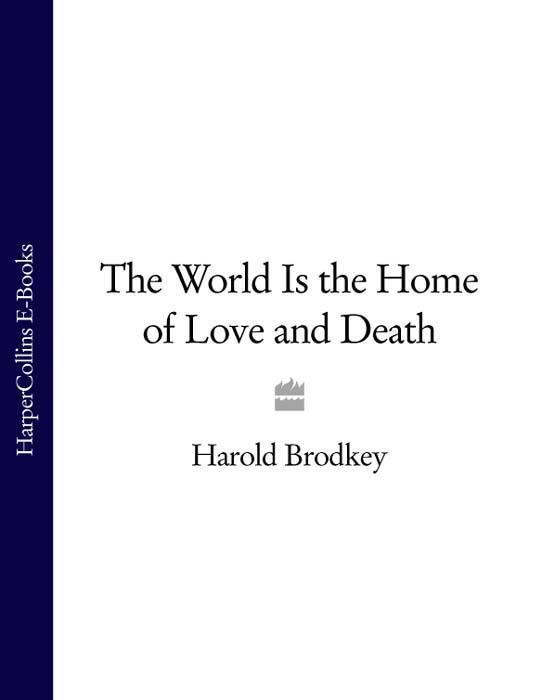 THE WORLD IS THE HOME OF LOVE AND DEATH
Harold Brodkey

What I Do for Money

The World Is the Home of Love and Death

A Guest in the Universe

Also by the Author

The hard rain sounds like a heartbeat. The heavy green canvas awnings around the three-sided screened porch buck and grunt and creak; they sag with the hard rain, and they drip, and then suddenly they rise and twist and water splashes out. Inside those passionate sounds, the porch glider squeals and the wicker chair squeaks. Ida Nicholson, Momma’s guest, in expensively crude, heavyish, wrinkled linen and with stylishly stately curls on either side of her head (her hair smells of hot iron even in the rain), sits with bossy nervousness in the wicker chair.

Momma has on rouge and eye shadow; and her lipstick is so bright in the damp air that it shouts in my eye. Ma’s porch grandeur. She is all dressed up. Her eyes are not fully lit; they are stirring like half-lit theaters. The lights never go on, the scenes are not explained. Her nakedness of but only half-lit soul puts a disturbance into the air—I feel shouted at by that, too. Her art is immersed in darkness. The floor of the porch—concrete with an oval straw rug—smells of the rain. Lila’s voice: “Ida, everything that I do on this matter, I do because S.L. loves this child—he’s pretty, isn’t he? You wouldn’t think he was just flotsam and jetsam. You know me: I may vote Republican yet; I’m not the maternal type—the child is S.L.’s pet project. S.L. makes the decisions; if he doesn’t call in a doctor because the child doesn’t talk, there’s an excellent reason: S.L. has thought it out: if the child is real sick, what are we going to do? How long can we keep him? Now he’s doing fine. S.L.’s in no rush: sufficient evil unto the day. I can’t tell you what to think, but I can advise. I recommend it to everyone, Let’s live and let live. I’m not an inexperienced person, Ida; in a lot of battles, I count for more than a man.”

Ida is delicately made but ungainly—that is a kind of sexual signal. It is an indication of will. Her movements and eyes are more for purposes of giving social and political and intellectual messages than
sexual
ones—this is a matter of pride as well as of defiance, a useful grotesquerie. Her alertness is a kind of crack-the-whip thing—not uncommon in the Middle West but uncommon there to the extent she takes it when she is not being folksy and Middle Western. Her style of dress, expensive and
sportif
, French, is obliquely sexual in the manner of women athletes of that day, golf players and tennis players, and is without the insolence that marks the project of the arousal of men: she is seriously chic, magisterially so, and that includes a mock dowdiness.

Lila does not try to compete with that: big-breasted Lila, in white with polka dots and a wide patent-leather belt, is sadly heterosexual—theatrical at it—but convincingly real, not even faintly a pretender. She has the gift, or art, or intrusiveness, of apparent personal authenticity.

Ida’s legs are thin—toylike almost—above flat shoes with fringed shields over the laces. Lila’s legs are those of a cabaret singer, in high-heeled patent-leather pumps, very plain and yet noticeable anyway. Ida has on a white-and-blue tie, Lila a white-and-black polka-dotted scarf caught with a diamond pin. Ida’s “polite” inexpressiveness, a powerful quality in her, and her social rank (her position in relation to what others want from her) add up to her being
a dry person, someone with a dry wit, a wonderful person, really, and
(to go on using Momma’s terms)
she was in charge. Who was I? We were nobodies.

Ida has a pronounced quality of command—but it is not local-dowager stuff—it is
charmingly in-and-out—taking turns, fair play
(Ida’s phrases)—
but
(Lila said)
she was always the referee and the judge
(of what was fair).

Ida feels that nothing in the way of feeling or intellect is a puzzle for her. Her omniscience had lapses but she did not overtly confess to them: she could not have run her kingdom then. Her confidence came from her triumphs: her sister married a newspaper-and-magazine potentate in the East (Boston chiefly). She may have influenced the policies of the newspaper. She always said she did. She was a dilettante philosopher in public conversation and good at it. Then, there were her successes in Europe—social ones, with women: the most difficult kind. She divided feelings into those of pleasure—by which she meant feelings of self-love, the acknowledgment of merit and standing, of the powers of the self—and the feelings of emergency: hurt, rage, self-pity, the necessity for fighting.

Knowing Ida meant you were playing with fire.
For Ida, incoherence is ill-health: she becomes an invalid from contradiction—in herself, by others of her. The fluctuation in others of contradiction, the foreign actuality of others’ thoughts, plus her ignored feelings when others show their strange thoughts, cause her
nervousness.
Ida feels as a Christian (lady) that historically the
serious
work has been done and that certain forgiveness obtains nearby for silliness—forgiveness overall and acceptance: a truce. For her, religion has altered into
manners—
through manners she has a high-speed connection to what she considers to be the tragic; and she has a tactful attachment to silliness (everything that is not tragic but is merely sad). She hungers for transcendence. This gives her a beauty that Lila is aware of, an ugly beauty of a sort,
a real beauty, the kind men don’t know about: Ida is a someone.
Ida’s moral illiteracy, her ethical inanity, are not anything unusual—they are the common human matter of power.

When Ida was on her high horse, you could forget she hated everybody and could do anything she liked and when she did it she didn’t apologize: there was a lot to her. If luck had gone her way, who knows what she could have done? She was a brilliant person who was also no good.

Ida—this is in a moment without men in it—asks, converting her full rank into tentative silliness, with a great deal of calm and yet nervous music in her voice, “Well, Lila—” Pause.
“What
do you think of the rain?”

Lila sits suddenly still on the porch glider. Her face seems to recognize a great many notes and possibilities in the question—this is sort of a joke—and she replies as if carefully, the false carefulness making an ambiguous music, “I don’t mind rain; my hair holds up in the rain. I’m lucky: I don’t get frizzy.”

Ida puffs on a cigarette. Momma suddenly—naïvely—poses as someone who is not watching Ida.

Ida looks at Momma’s hair—the widow’s peak, the shininess above and below and around, past the polka-dot bandanna (and its tail); and she says, “I’m a daughter of the pioneers, Lilly. I have prairie hair—I get frizzy; it’s a bane: I’m just a workaday person—Lilly—”

Momma has a drink clasped in a ringed hand; she keeps her eyes lowered even when her old name is uttered. Ida has a drink, too, and a cigarette. Momma sighs: so much deciphering—Ida’s clothes and money and voice and the moment—and then Momma shifts her posture and suddenly “gives up,” as if with overwhelmed innocence or naïveté or ignorance: this is her most common tactic with a powerful woman, to give in, give up, and not mean it: it’s a kind of wit—a kind of sexuality. Ma’s face shows she decides to be
the hostess
—ordinary. There is a question whether Ida will allow it. Will Ida insist on being at home in Lila’s house? Will she treat it like
a pigsty?
The particular music—the cast of voice, of face—with which Ma gets ready to do this marks her as worthwhile, as not a novice, as having social promise: “Ida, we have some little sandwiches; Annemarie put them together for you: she stayed away from the noisy lettuce you don’t like—I told her what you said that day at the governor’s luncheon. She made them especially for you—I told her you were coming.
You impress—her
.” Ma rose and walked across the porch—a sort of workaday hostess: a version of workaday to offer Ida a plate of sandwiches. Momma’s dress has birdlike lights in it and rustlings: she is enclosed in a watery aviary of small lights and small noises. She has a sweetish, and slightly sweaty, full-bodied smell—startling. Her red mouth is, too.

Ida blinks and takes a sandwich and tilts her head like a fragile queen who yet has a sinewy strength of mind. She says, in educated, rapid, smart tones of a kind that Lila has never heard from anyone else, never heard a version of in the movies or onstage: “And you, do I impress
you?
”

Lila recognizes the
power
and feels thrilled. She feels the “class” thing her way, as beauty and as enmity—the possibility is that she will be hurt; she is game.

But (in Ida’s terms) she is
infinitely sly
—Momma has her own fairly complete realm of knowledge and she has her own power: she hears not
a complete woman
(Lila’s term) but
a girl bookworm
and
a woman who doesn’t smell like a rose
: someone lonely, wooden, undemocratic, locally solitary—it’s the Christian snobbery: that mingling of
truth
and
the ideal
(Momma’s dichotomy),
the truth
being loneliness and a kind of poverty of life, of soul, and the ideal being a social reality, symbolized by Ida’s Parisian suit, with its man-cut jacket and pleated skirt, the
real ideal
(Ma’s term) inside the ideal being the satisfaction of the impulses of a woman of rank (in America, in imitation in this case of European examples): satisfactions, consolations,
and rank.
What Lila understood as
the ideal
was earthbound, but it was earthbound romance, self-loss—suicidal bursts of love and extravagance with money to make
a real story, a legend around here.
Not that she practiced that form of suicide, but she played at its edges. So to speak. What Momma meant by
the ideal
was the most advantageous
human
thing for a woman. In order not to be aggravated and go mad or give up: when Momma says she is not young, is not nineteen, this is part of what she means.

Ida feels herself to be a
Christian
warrior, Ida feels she is a vessel by blood, by blood lineage, for illumination and heroism as part of the matter of competing, as a mark of victory—i.e., of government. She is very stubborn about this.

Lila thinks that is banana oil.

But the fact is that at moments Ida is her ideal.

Ida knows that The Ideal Figure is
the one that gets loved
but not necessarily embraced.

Twenty Something by Iain Hollingshead
Tapestry by Fiona McIntosh
Strings by Kendall Grey
The Beyonders by Manly Wade Wellman, Lou Feck
A Song for Issy Bradley by Carys Bray
Model Murder by Nancy Buckingham
The Devil of Nettlewood (The Anarchy Tales) by Trent, Louisa
The Scottish Witch by Cathy Maxwell
A Million Steps by Kurt Koontz
Growing Up Brady: I Was a Teenage Greg, Special Collector's Edition by Barry Williams;Chris Kreski
Our partner