Read The Wrong Man: The Shooting of Steven Waldorf and The Hunt for David Martin Online

The Wrong Man: The Shooting of Steven Waldorf and The Hunt for David Martin 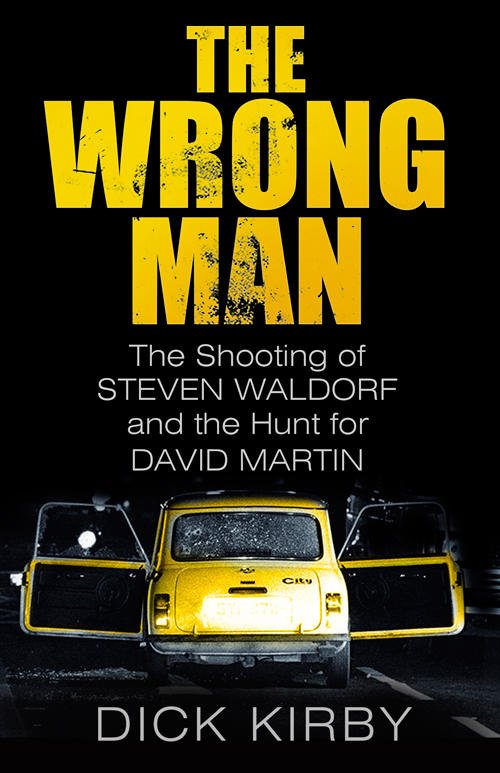 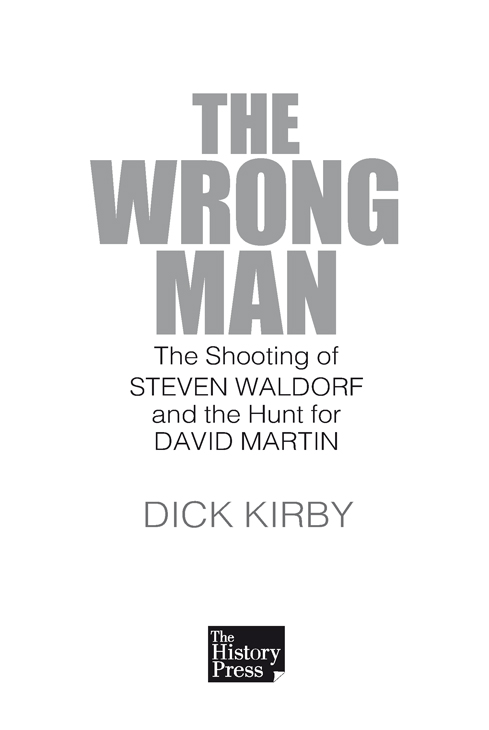 This book is dedicated to Len and Beryl Monica Waldorf,
who displayed great courage, dignity and compassion
throughout this case.

And also to Ann, who, like the Waldorf family, waited,
wondered and worried.

I
should like to thank first my long-time chum, the intrepid reporter Jeff Edwards for such a splendid foreword. Next Mark Beynon, the commissioning editor at The History Press, for his enthusiasm regarding this book. In addition, Paul Bickley of the Crime Museum, New Scotland Yard; Shannon Stroud, Freedom of Information Advisor, New Scotland Yard; Bob Fenton QGM, Honorary Secretary to the Ex-CID Officers' Association; and Susi Rogol, Editor of the
London Police Pensioner
magazine, all assisted and I am most grateful to them.

Once more, I have to thank my daughter Suzanne Cowper and her husband Steve, together with my daughter Barbara's husband, Rich Jerreat, who successfully guided me through the baffling minefield of computer land.

There were others who for a number of reasons either wished to remain anonymous or who were in a position to provide pertinent information and who chose not to do so. Bereft of their assistance, I have endeavoured to ensure that the content of this book is as accurate as possible and acknowledge that any faults or imperfections are mine alone.

As always, I pay tribute to my family for their never-ending love and support; in already mentioning my daughters and their spouses, I naturally include my grandchildren Emma, Jessica and Harry Cowper and Samuel and Annie Grace Jerreat, as well as my sons, Mark and Robert.

Most of all, I salute my wife Ann, who, for over fifty years, has been my dear, loving companion.

T
here is no doubt in my mind that Dick Kirby is the all-time best, most successful, and prolific author of âreal life' books about the British police.

I like to think that, in a very small way, I helped him on that path.

I first met Dick in 1970. He had just been made a fully fledged detective constable posted to the CID (Criminal Investigation Department) at Forest Gate in East London, and I was a fluffy-faced aspiring 21-year-old crime reporter on the local
Newham Recorder
. In those days, unlike the situation now, reporters on local papers could get to meet police officers working at busy London police stations easily and without much restriction. Providing you were considered (in CID parlance) âa good cock', who would happily stand his round in the pub and knew how to play by the rules, you were usually welcome.

I instinctively liked most of the cops I met back then. Many of them were outgoing, animated, even flamboyant characters, and I enjoyed their endless stories of life at the sharp end on the mean streets of London. I also liked their bonhomie and sense of comradeship, and their slightly jaundiced and sceptical view of life. Perhaps most of all I liked the dark dry humour and the ready wit many of them possessed.

Newham had one of the highest crime rates in the country at the time and the police were always full of stories. Some of these tales were in the best traditions of Dick Barton or Fabian of the Yard. Sometimes the tales were astonishing and full of daring and courage. Some of them were about skill or cunning where good triumphed over evil. Some of them, to be frank, were where a more acceptable sort of evil triumphed over a worse form. Some of the tales were very tall indeed â and some were unprintable in a family newspaper. Grey areas abounded. I had the time of my life!

I can't remember exactly where or how I was introduced to Dick Kirby, except that he was one of those whose blend of fierce hatred of criminals, his disdain of weak and ineffectual senior officers and his loathing of devious lawyers and feeble magistrates made him stand out. With a liking for the cut and thrust of lively debate, a sharp wit and pithy observations on life in general, he was never short of an audience. He was a natural-born storyteller. We hit it off and in many ways our careers ran parallel, him moving up to some of the top crime-fighting units at Scotland Yard, while I went on to a long career as a Fleet Street crime hack.

So how do I claim to have helped give a push to Dick's later career as an author?

In the 1970s almost every police officer I knew was enthralled by the writings of the American author Joseph Wambaugh, who had for many years been a Los Angeles policeman until he turned his hand to writing. What cops everywhere loved about him was his ability to tell it like it really was. On the one hand, it was through compelling documentary stories like
The Onion Field
, where he drew on first-hand experience of terrible events which affected the lives of close colleagues. On the other, he wrote the candidly observed and extremely funny novel
The Choirboys
. Wambaugh was the real deal. He knew exactly how street cops thought, spoke, and acted, because he was one of them. In a way, he was their collective voice.

Dick Kirby was one of his greatest fans.

In 1979, as a crime reporter on the London
Evening News
, I received a phone call from a woman I knew who was working as a publicist for a film company. Hollywood had made a film version of
The Onion Field
which was to be released soon in Britain. As part of the promotion, Joe Wambaugh was coming to London. While he was here he'd expressed a wish to meet some London police officers. Could I be of any assistance? You bet I could.

The choice was easy. I rang Dick and our mutual chum Peter Connor, another East London police detective, and a dinner meeting was arranged. Needless to say, Dick and Joe and Pete got on famously. And following that meeting I know Dick went on to forge a strong friendship with Joe, which endures to this day.

I have no doubt that Dick was inspired by his American counterpart to take up a second career as a writer when he retired from policing. Although their experiences were separated by the width of an entire continent and an ocean, in my opinion there is something similar in the way Joe and Dick write. You could call it shared experience, but it is more than that.

I believe it is because Dick also has the instinctive ability to translate and describe the subtle nuances in the way real police detectives, real cops on the beat working at the sharp end of law enforcement, think, speak, reason and behave.

The story of David Martin and his crimes is an extraordinary one, which Dick tells here in well-researched detail. Crime reporters, sometimes with tongue in cheek, have often used the phrase âmaster criminal' to describe well-known villains. I would not call Martin one of those. He was first and foremost dangerous, volatile, ruthless and narcissistic. However, he was, as this book describes, in many ways exceptionally clever and quick of mind. For the police he was a resourceful, determined and formidable foe. In a strange twist, which this book chronicles closely, Martin became as well known perhaps not for what happened to him, but what happened to someone the police thought was him.

The entirely innocent Stephen Waldorf had the misfortune to strongly resemble Martin in appearance. Thus fate conspired to put him in the passenger seat of a car which was being followed through London by an undercover police unit who were looking for David Martin. Because Martin had previously shot and nearly killed a policeman, these officers were psychologically wound as tight as watch springs. Eventually the car, hemmed in by stationary traffic, was riddled with police bullets. Waldorf himself was hit five times and then his skull was fractured with the butt of a detective's pistol. Astonishingly perhaps, he survived and made a full recovery.

Dick Kirby deals with this seminal moment in modern police history with great even-handedness. His description of the surveillance operation which police thought was targeted on David Martin brilliantly conveys the heart-stopping uncertainty, contradictions and chaos that can occur when even the best constructed plans suddenly run out of control. The reason his account is so compelling is because, once again, Dick demonstrates this sixth-sense knowledge of the way genuine police officers reason and react at times of great tension and stress. Like Joe Wambaugh, Dick Kirby is the real deal. He writes with the insight of someone who can only do so when they've lived it and felt it emotionally.

The Waldorf shooting was a watershed for the way British police train and deploy firearms specialists. But as any military man will tell you, few battle plans survive first contact with the enemy, and so it is with the police. If you place deadly force in the hands of anyone, be it well-trained police or ruthless criminals, and add tension and emotion into the mix, it will always be the case that sometimes things will end in catastrophe.

I
leant back in the rather rickety captain's chair and gazed around at the shabby surroundings in Harry's office, from which he ran his scrap-metal business in Hammersmith, until my eyes finally settled on Harry, sitting behind the desk that separated us.

âI'll always remember turning over a scrappie's yard when I was an aid to CID,' I said reminiscently. âD'you what he said to me, Harry?'

When There's No More room In Hell: A Zombie Novel by Duffy, Luke
Mistake: A Bad Boy Stepbrother Romance by Lauren Landish
Dandy Gilver and a Bothersome Number of Corpses by Catriona McPherson
Dawn Endeavor 3: Julian's Jeopardy by Marie Harte
Damage (Havoc #2) by Stella Rhys
Remember When 3: The Finale (Remember Trilogy #3) by Torrest, T.
Jet by Russell Blake
03 The Princess of the Chalet School by Elinor Brent-Dyer
Flashback (The Saskia Brandt Series Book Two) by Hocking, Ian
The Stars Askew by Rjurik Davidson
Our partner