Read The Years of Endurance Online

The Years of Endurance 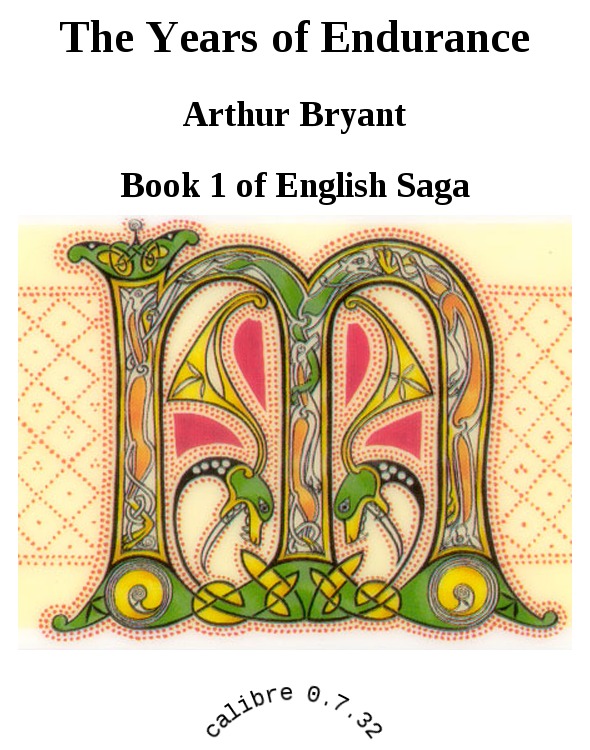 THE YEARS OF ENDURANCE

the
man
in
the
making

the
years
of
peril

the
saviour
of
the
navy

THE YEARS OF ENDURANCE

" I am not at all afraid for England ; we shall stand till the day of judgment."

THIS EDITION PUBLISHED BY THE REPRINT SOCIETY LTD.
BY ARRANGEMENT WITH WM. COLLINS SONS AND CO. LTD.

in
common
devotion to
the
english
past

The
British fight against the attempt of a revolutionary France to dominate the world lasted twenty-two years. It began in 1793 when men who had set eyes on Protector
Richard Cromwell were still living, and ended in 1815 when others who were to know the youth of Adolf Hitler were already born. It saw the end of an old age and the beginning of a new.

In that struggle there were only two constant factors. One was the French resolve to create a New Order; the other was the British refusal to admit any Order not based on law. Other nations were tossed in and out of the storm like leaves. Only Britain, though she bent, never broke. For a generation, sometimes with powerful allies but as often alone, she fought on against a nation with twice her population and animated by a strange revolutionary fanaticism which gave its devotees the strength of a man in delirium. Such was its power that at times Britain found herself fighting almost the whole of Europe, including her former allies, without, apparently, the slightest chance of victory and with very little of survival.

Yet her patient, rock-like people never compromised, never gave in, never despaired. They had no Churchill to lead them, for Pitt— the pilot who weathered the early storms—was Chatham's son only in his faith and fortitude but by no means in his understanding of war, in which at first he was the veriest bungler. After three years in which Britain lost almost all her allies and reached the verge of bankruptcy, her enemy threw up the greatest military genius the world had known. For thirteen years, until Sir John Moore twisted his tail in Spain, no soldier got the better of Napoleon or, save for the stubborn Russians for a few months in the Polish mud of 1806, was even able to stand up
to him. " The in
isled Ararat, on which the ark of the hopes or Euro
pe and of civilisation rested,'
alone survived.

Survived and triumphed. " Amid the wreck and misery of nations it is our joint exaltation that we have
continued superior to all that
ambition and despotism could effect; and our still higher exaltation ought to be that we provide not only for our own safety but hold out a prospect to nations now bending under the iron yoke of tyranny what the exertions of a free people can effect." The voice is not Churchill's but Pitt's: the year not 1940 but 1804.

For this is not the first time Britain has faced a Continent overrun by a tyrant or seen her allies, one by one, beaten out of the field by seemingly omnipotent force. When France collapsed in 1940 and her coasts became Hitler's, some, remembering how desperately we fought in 1914 and 1918 to save the Channel ports, felt that our case was desperate. It was happy for England that at that hour she had as Prime Minister a man who was not only a master orator but also an historian, and who knew that the lonely and desolate place in which his country stood was one in which she had stood before. He saw her, awakened and restored by adversity, fulfilling her supreme historic function: the faithful custodian of human law and liberty in the
hour when others fell or slept.
Until younger nations should awake to join her, he gave her
the
faith to endure.

It is to enshrine the lessons of that earlier war that I have written this book. The present volume covers only its first decade: that which ended with the Peace of Amiens. But it is the part of the war about which least is generally known and that to which our own struggle has borne till now the closest affinity. Trafalgar and Waterloo were so engraved on the mind of the nineteenth century that men forgot what preceded them and alone made them possible.

I have tried to portray the British people on their long pilgrimage of endurance and to show, shining through all their mistakes, what Pitt called " the virtues of adversity endured and adversity resisted, of adversity encountered and adversity surmounted." Because the duration of the conflict robbed it of unity, I have not attempted to compass it in a single volume. It was two wars, not one. In the first the combatants only reached the stage at which a final victory for Britain became possible by fighting themselves to a temporary standstill. They had to pause in order to be able to go on at all. Few British statesmen imagined that the truce of exhaustion negotiated at Amiens could be anything but temporary. But it was necessary to prove to a war-worn people that, though revolutionary France had ostensibly changed its rulers and
principles and substituted the
despotism of a professional soldier for that of political dictators, it was still a State with which it was impossible to remain at peace. Like ourselves after Munich, our ancestors tried the experiment of living with and letting live a Europe in which there was no balance of power but only unilateral force. Within a year the experiment had failed. When the war began again it was a new war. Yet the foundations of victory—the theme of my sequel—had already been laid.

This is the story of how they were laid. They were compounded of errors and follies, of failures and recoveries, of bitter disappointments bravely borne, of experience and dawning realisation, above all of courage, resolution and endurance. The scene of battle ranged from the swamps of the Caribbean to the sands of the Egyptian desert, from the dark waters of Lough Swilly and the Sound to the blue of the Malacca Straits and the Indian Ocean. The mechanical and tactical devices of war were utterly different from those of to-day; the human and strategical problems strangely similar. Weapons and methods of manufacture and transport change much in five generations. Human and national characteristics, geography and the laws of war change little.

Within these pages the reader will find many of the familiar phenomena of our own troubled time. He will see on the Continent the corruption and final breakdown of an outworn society, and the emergence from its collapse of a dynamic and revolutionary force operating not in the peaceful vacuum of a university classroom but in the most powerful military nation in Europe. He will see the early enthusiasm to which that national rebirth gave rise turned into a terrible instrument of force by the cruel and purposeful men who rose on its waves to power. He will see
the
proscription, imprisonment and murder of political opponents, the denial—in the name of liberty and patriotism—of all freedom of speech and, as
the
appetite for blood grew, an orgy of sadistic cruelty, indulged not only as a deliberate instrument of policy but, by the baser sort of Jacobin, for its own sake. He will see mass hatred employed as a motive force and ideological ends held out as justifying every means, however base and destructive. He will see a " Great Nation " denying all morality but the pursuit of its own interests and using, as part of its technique of conquest, a p
ropaganda appealing to diamet
rically contradictory interests and a diplomacy which pretended peace while planning war and which overran its victims' territories by hordes of agents acting as the advance guard of armies. He will see its unconscious allies or dupes in every decaying eighteenth-century State turned by war into "fifth columnists" and by defeat into " quislings."

It would be easy to carry the parallel too far. The French Revolution was marked in its early stages by nobility and generosity: it was inspired by a creed not of hatred and racial discrimination but of love and brotherhood. In the long run it permanently broadened the horizons of mankind. It is remembered to-day for the residue of what was good in its fiery vitality after it had been confined within lawful bounds by the resistance of Britain. Yet without that resistance it would have consumed the earth and, under the little gang of tyrants into whose keeping the French people had committed their bodies and souls, would have perpetuated a tyranny more awful than the corrupt inertia it destroyed. Revolutionary force can seem very harmless in a school text-book after the lapse of a hundred years. We who have seen the unloosed surge of Nazi fanaticism and the Panzers breaking down the dams of civilisation are better able than our immediate predecessors to understand what the generation of Pitt and Nelson had to resist.

Heart of Gold by Robin Lee Hatcher
H.J. Gaudreau - Betrayal in the Louvre by H.J. Gaudreau
BROKEN BLADE by J.C. Daniels
Loving You (Remembrance Series, Book 2) by O'Neill, Cynthia P.
Karaoke at the Tumbleweed by Carol Lynne
The Pursuit of Alice Thrift by Elinor Lipman
The Joiner King by Troy Denning
The Perfect Candidate by Sterling, Stephanie
DARK REALITY-A Horror Tale by Mosiman, Billie Sue
The MacGregor Grooms by Nora Roberts
Our partner