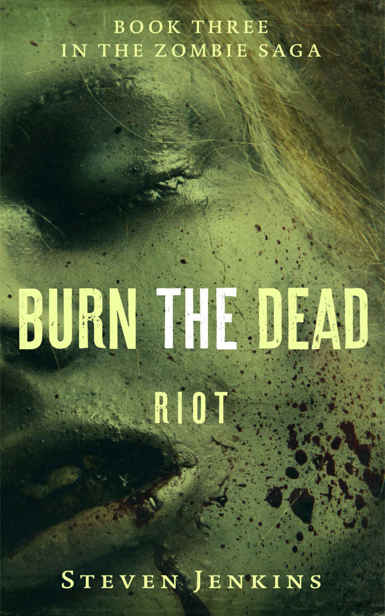 All rights reserved. This is a work of fiction. Names, characters, places and incidents are used fictitiously. Any resemblance to actual events, or persons, living or dead, is coincidental. All rights reserved. This book or any portion thereof may not be reproduced or used in any manner whatsoever without the express written permission of the publisher except for the use of brief quotations in a book review.

The right of Steven Jenkins to be identified as the author of the Work has been asserted to him in accordance with the Copyright, Designs and Patents Act 1988.

Published in Great Britain in 2016
by Different Cloud Publishing.

Other Titles by Steven Jenkins

Burn the Dead: Quarantine (Book One) 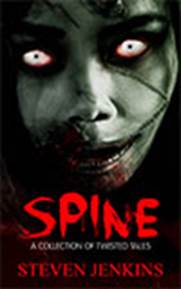 “If you love scary campfire stories of ghosts, demonology, and all things that go bump in the night, then you’ll love this horror collection by author Steven Jenkins.”

For a limited time only, you can download a
FREE
copy of Spine – The No.1 bestseller from Steven Jenkins.

I used to love this time of year.

Lazy days sitting out with the boys, drinking beer, watching the girls go by. No rain, no shitty cold weather—just the summer sun roasting our pasty Welsh skin.
Paradise
.

But not today, though.

Because today is the day that I die.

I step out onto the thin ledge, my heart beating hard against my chest. I haven’t been this high up since I was a kid. It takes me back to when I was ten, scaling the multi-storey car park like an idiot. That was the first time I got arrested. Back then it was a badge of honour.

Those days are gone.

The wind is strong at this height. It shunts my body, but I manage to keep my balance. At least it’s not raining; at least I won’t slip. The last thing I want is to go off too early. I want to go on
my
terms.

I shouldn’t look down—only straight ahead at the night sky. But I can’t resist the temptation. From up here, the ground feels a million miles away. But it’s not; it’s just the haze, and the fear, twisting my insides like a corkscrew.

You can do it.

You have to
. You’re out of options. Time is almost up. You can’t stay here anymore.
It’s over!

Wendy’s face pops into my head. I try not to let it, but it’s the only face I truly know. And she’s the only person that really knows
me
. If I had any parents—or a real family—I guess I’d see their faces instead. But I don’t, and Wendy is the closest thing I have to a mother. So I can’t shake off the image
—
my mind won’t allow it.

I creep forward, the ground now an abyss of darkness, a gateway to Hell.

No
, it’s not a gateway. I’m already there. And I’ve been there all my life. Today is just the last straw.

That great summer smell has gone, replaced by the stink of rotting bodies and disease.

And there’s nothing left to do now.

Where the hell are my trainers?

Wendy’s put them somewhere; I just know it. I drop to the floor and peek under the bed. All I see are Harry’s toys, scattered across the carpet like a playpen. Cars,
Spider-Man
figures; he hasn’t played with these in years.

“Wendy!” I call out as I stand, frowning as if it can’t possibly be my fault. “Where’ve you put my white trainers?”

I step out of my bedroom. “Wendy!” I shout out to the entire house.

“Shut the fuck up, Alfie!” Phil shouts from his bedroom, trying to sleep off another afternoon of cider, no doubt.
Drunken bald prick!
Not the greatest of foster dads, but at least he’s too wasted to hit me.
He can try his luck—if he fancies another black eye.

I hear Wendy walk up the stairs, her footsteps lighter than usual, clearly avoiding pissing off the old man. Why she hasn’t left him already is beyond me. It’s not like he’s flush with cash or anything. He’s just another worthless sponger, happy to collect his payment for being a foster parent.
Thank God for Wendy
. If it weren’t for her, I’d probably be sleeping in the cupboard under the stairs.

“Which trainers?” she asks, her voice a little quieter.

“The white ones,” I reply as she follows me into my bedroom.

She opens the wardrobe doors. “All your trainers are white, Alfie. You’ll have to be more specific. New? Old? Dirty ones?”

“I’ve already looked in there,” I tell her, quickly closing the doors after her. That’s the last place I want her snooping through. She’s quicker than a sniffer dog at finding my hidden shit. “I’ve looked everywhere. Please tell me that
jackass
hasn’t sold them on eBay.”

Wendy turns to me, rolling her eyes. “Don’t be silly. Phil wouldn’t do something like that.” I love the way she knows
exactly
who the jackass is. “They’re here somewhere.”

“Why?” she asks, kneeling down to look under the bed. “Thinking about buying a lottery ticket?”

“No. It’s because Swansea have won every game when I’ve had them on—and I ain’t risking it today.”

“That’s ridiculous, boy,” she snorts, scanning the rest of the room. “You’re being superstitious.”

I slip on my
Swansea
jersey, and then check out my new haircut in the mirror. It’s a little shorter than I like it, but an Afro just doesn’t go down well in Swansea. “It’s important, Wendy. It’s the League Cup Semi-Final. I can’t afford to fuck it up.”

Wendy turns to me, a sharp scowl on her brow. “Watch your language, Alfie. This is your
home
—not some house party with your friends.”

I hate swearing in front of her, but when you live under the same roof as two loudmouth foster sisters, a bratty nine-year-old, and an alcoholic
asshole
, the words just pop out as easily as breathing.

Before she can tear into me again, she spots something in the corner of the room, by Harry’s bed. “Are those your trainers?”

I see something white poking out, wedged between the wooden headboard and cream wall.

The little shit
, I almost say when I yank them out. “He’s hidden them from me.”

“Don’t be so paranoid. He probably just borrowed them.”

“He’s a child. They’d never fit him in a million years.”

“Look, he’s downstairs watching a film with Rosy. Don’t go arguing with him now. I’ve already had to separate them once this morning. I’ll have a quiet word with him after you’ve left for the game. Okay?”

I sigh loudly, sitting on the bed, slipping on my squashed trainers. “
Fine
. But make sure you do. He gets away with murder, that kid.”

“Watch the hair,” I say with a smile, moving my head away from her hand. “I worked hard on that.”

Walking towards the door, she laughs. “What hair? They barely left any to mess up.”

Wendy disappears out onto the landing, leaving me to do one more check before Ginge gets here. I stand up and look down at my feet.

I pat my back pocket. Phone?
Check.

I push the loose coins from the desk into my hand and pour them into the left pocket. There’s about ten, twelve quid. It’ll have to do.

Pulling the drawer open, I take out the ticket. Crazed butterflies fill my stomach when I see the words
Swansea vs. Cardiff
written across the grey and red card. Last year was a complete washout. But 2009 is
our
year! I know I say that every year, but this time is different. This time, I can feel it in my bones. “You’re going down, you Cardiff fuckers!” I say, kissing the ticket hard.

“I heard that,” Wendy says from the landing.

I go to the doorway and watch her walk down the stairs, carrying a basket of washing. “Sorry,” I say, as she disappears out of sight. I give the landing a quick scan and then close the door.

Opening the wardrobe doors, I reach up onto the top shelf and pull down the shoebox. I lift the lid off and stare at its contents for a minute.

Just leave it there, Alfie. You don’t need it.

Another thirty seconds pass before I take out the small flick-knife, and quickly slip it into my pocket.

I know it’s Ginge at the door before I’ve even opened it. I know his knock. Not quite a secret knock, just loud enough to wake the neighbours—but mainly to piss off Phil. I think Ginge does it on purpose. He likes to be the centre of attention. But he’s not the one who has to live with the wanker.

“You took your time, Alf,” Ginge says, leaning against the doorframe as if posing for a modelling shoot. He’s wearing his white flip-flops, red and blue board shorts, and a Swansea jersey—which is
way
too tight for that bulging belly. “Thought you’d bailed on me.”

I snort. “What, and miss the most important game of the year? As
if
. I think that ginger mop is cutting the circulation to your tiny brain, mate.”

“I would say the same to you, but you’ve chopped off the Afro. Why the fuck would you do that? That was the only reason you had any girls in school. It was the only cool thing about you.” He steps into the house. “Now you’re just some black teenager. How boring is
that!”