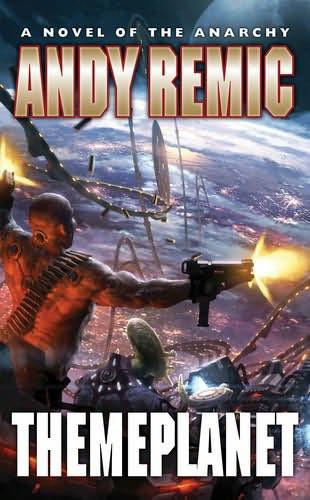 Welcome to Theme Planet, an entire alien world dedicated to insane rides, excessive hedonism and dangerous adventure. Operated by the Monolith Corporation, Theme Planet is the No. 1 destination for fun-seeking human holidaymakers Galaxy-Wide!

Amba Miskalov
is an Anarchy Android, an assassin/torture model fitted with a Quantell Systems v4.7 KillChip. She is beautiful, merciless and deadly, and blends perfectly with her human superiors. Sent to Theme Planet on a dangerous assassination mission, Amba stumbles upon a plot to undermine and destroy Earth’s all-powerful Oblivion Government – and its Ministers of Joy.

But Amba is twisted, damaged and decadent – and this rebellion poses Amba a problem: to remain loyal to her creators and tormentors, to support the enemy – or annihilate them all.

When kicked to describe himself,
Andy Remic
claims to have a love of extreme sports, kickass bikes and happy nurses. Once a member of an elite Combat K squad, he has retired from military service and claims to be a cross between an alcoholic Indiana Jones and a bubbly Lara Croft, only without the breasts. Remic lives in Lincolnshire and likes to think lewdly about zombies. 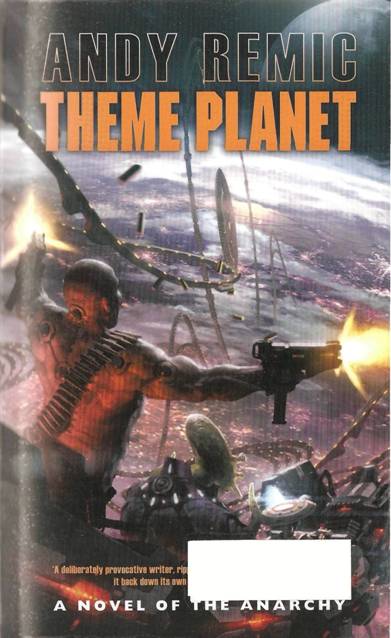 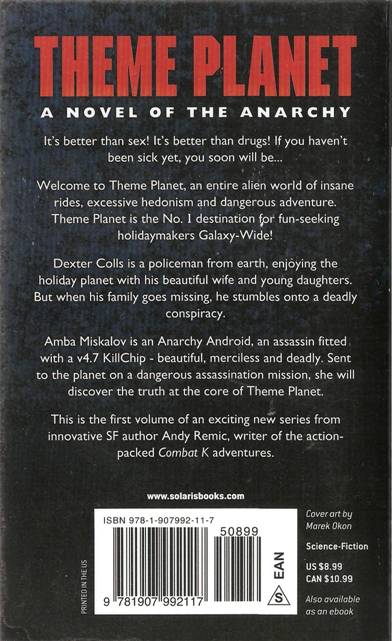 And
the
Lord God
planted

and
there he put the man dude

whom
he had formed. And

out
of the ground made the

Lord God
bro
to grow every fizzy tree and weed

that
is pleasant to the sight, man,

and
all good for food and smoking and stuff;

the
tree of life also in the midst of the

garden
of the Eden, and the tree of

knowledge,
and of the worldshell and, like, good and evil. Dude.

Three thousand people sat in
bright-eyed anticipation, knuckles white, teeth clenched, gasps gasping.
Sunlight defined a glittering broad canvas, as big as the world. A subtle
breeze ripe with vegetation caressed the graceful, mechanical ascent. There was
a background of excited chatter, a
hum
of anticipation and energy.

Eventually, the climb ended a
full
five kilometres
up. The world, the theme park, the
Theme Planet,
spread before the assembled ride freaks, colourful, and awesome, and vast.

To the left, fields of dancing
pastel flowers jigged in the wind.

Ahead, amidst gleaming oiled
bodies, jewels sparkled on a turquoise sea crested with foam.

There came a hiatus:

A long moment of peace, and
serenity, a pause for thought, a moment to study one’s own wisdom in these
things; one’s own mortality; one’s own longevity; one’s own connection to God.

Then there came a
bang,
a
clank,
a lurch... and a sudden, violent drop into infinity and oblivion below...

Followed by three thousand
screams as everybody waved their hands in the air.

The bitter mountain
wind ruffled Amba Miskalov’s tight jacket. Pine
scent filled her nostrils, the rich perfume of the forest. Slowly, she reached
behind herself and tied her shoulder-length blonde hair into a pony-tail, then
placed ski-goggles over her eyes and checked her twin silenced 9mm Heckler
& Koch P7 pistols.

She moved through the red pine
forest like a black ghost, halting by her skis. She glanced down the savage
slope through mist and gloom, which dropped away into vastness and darkness
beyond, more dangerous than any tourist ski-run. It was a scoop out of the
mountainside. It was the mountain, mocking humanity with an impossible thrill.

She laid the skis delicately on
the snow, and stepped in with tiny
clicks.

It’s time,
whispered Zi, her FRIEND, in the
back of her mind, and Amba held a hand to her breast where the FRIEND lay
absorbed, and
felt
her presence, like an oil cloud muddling her
thoughts, a machine spirit reading her mind... before Zi shifted phase, and
seemed to fade. In Amba’s coat, against her heart, she felt the hard metal of
Zi under her skin and her eyes narrowed. No. Zi would not leave; could not. Not
now. Not ever.

Especially when it was time for
the
kill.

Amba pushed off, elbows tucked in
tight, and gave a small gasp as gravity took her in its fist and threw her down
the mountain. In near-darkness she flitted through the snowy forest, trees slamming
by to either side in an insane drug-blur, a game of reflex and courage and
skill. Amba banked left - right - left, jumped a small embankment and sailed
ten feet before touching down lightly and shifting almost imperceptibly right,
skimming a tree with inches to spare, cold wind biting her, the forest
absorbing her, and a distant owl hooting as if to mark her impossible passage.

Through the dark forest Amba
flew, on a course almost pre-programmed in her skull from the previous day’s
reconnoitre. But here, and now, this was no trial run. This was real, it was
painful and pain
giving;
this was life and death.

Skis hissed on snow as the forest
breathed around her. Cold air bit tiny triangles of exposed flesh. Adrenaline
pumped. And then Amba saw the base flashing towards her, twin high watchtowers
and an ominous smooth black wall topped with coils of razor wire.

Amba shifted her stance again,
brain calculating fast, Zi allowing her to do her job. Pine branches whipped
her. She ducked fast under a low bough that would have removed her head. In a
flicker of ghostly white, she saw her target - a mound of banked snow. Her eyes
shifted, gauging, and she was satisfied. Satisfied? If it didn’t work, she’d be
dead, and nothing would matter.

She hit the mound at speed and
sailed out over the abyss. Swiftly, she scanned for enemies. Counted eleven on
the ground. Heavily armed. Machine gun nests in towers. She drew a P7, and a
silenced shot spat through the night, single bullet exploding a watchtower
guard’s head in a mushroom of brain slop and shattered skull shards. She
shifted, and a second shot neutralised the second tower’s machine gunner with a
hiss and a crack and a dull slap.

Still the guards on the ground
had not spotted her; were not aware of her existence. Several were standing
round a glowing brazier, warming gloved hands. Several more were patrolling the
perimeter, machine guns lowered. Amba, her airborne arc beginning a descent,
shifted her weight back and reached down towards her skis, angling herself for
the five guards hovering beside the barrel of coals. One looked up, and his
mouth opened in shock as Amba detached the binding on her left ski. The
sharpened ski flew like an arrow, entering the guard’s open mouth, ski-tip
exploding from the rear of his head in a tangle of bone and hair. He hit the
ground at the same time as Amba, who whirled around, her second ski lifted in
gloved hands and slammed like a sword at the four men. The ski hacked left,
razor-edge decapitating a man, then right, slicing another from collarbone to
hip in a whistling diagonal cut. Shouts echoed, surreal and detached. Cold
breath plumed like smoke. Gunshots rattled as if through honey; through a
decadent dream.

Stunned, the two remaining guards
lifted weapons, stepping forward as realisation gripped their brains in its
claws and forced them into stuttering action. Amba dropped the ski blade and
leapt, right hand slamming the man on the right in the throat. He staggered
back, coughing, as the other guard opened fire and Amba twisted, stepped back,
and slammed the weapon down, ploughing bullets into frozen earth; she grabbed
his hair and rammed his head into the brazier. The coals sizzled and he
screamed and thrashed, but she held him there until he went still. When she
eventually let go, she drew twin P7s and focused on the six patrolling guards -
three groups of two - who had now noticed her arrival.

Fuck off and let me work.

From you, bitch, I will never
need a hand. Just remember why you’re here, why we’re linked, and keep your
damn thoughts to yourself.

The guards were shouting and
pointing, and their comrade’s hair was on fire, face a mass of bubbling melted
flesh as he flopped back limp from the brazier. They growled and opened fire,
bullets whining, tracer flashing, kicking up earth and ripping into the
gurgling figure whose windpipe Amba had crushed. Amba dropped to one knee and
both P7s fired, methodically, systematically, bullets slapping across the
killing ground and sending guards sprawling. Two down. Four down, machine gun
bullets eating the night sky. Amba rolled right, and the final guards were
charging towards her, faces grim under black matt helmets, eyes furious, guns
levelled. Machine gun bullets ate across the frozen soil, and several
pinged
from the brazier behind her. Coolly, Amba dropped the spent mags from her
weapons and slotted in fresh ammo. A bullet scraped past her arm, slicing the
flesh; another grazed her neck, nicking her skin with a lover’s bite. And they
were there, huge men, heavily muscled, towering over her as she suddenly stood
and flipped backwards, landing in a crouch, and two
pops
and a
disintegration of lips and teeth and tongues and brain-mush beyond signified
the end of the guards. They carried on running, out of sheer weight and
momentum, passing Amba on either side before they finally hit the dirt on their
destroyed faces.

Taming a Planet (Trapped in Time Book 2) by Saxon Andrew
All Shook Up by Shelley Pearsall
The Way Back Home by Freya North
Bohemian Girl, The by Cameron Kenneth
The Dark-Hunters by Sherrilyn Kenyon
Passion by Lauren Kate
B006P1R39O EBOK by Kennedy, Lorraine
What He Commits (What He Wants, Book Thirteen) (An Alpha Billionaire Romance) by Hannah Ford
Reborn (Alpha's Claim Book 3) by Addison Cain
Sex in the Title by Love, Zack
Our partner